He is vivacious, he is witty, he is smart and he is one of the most successful directors of the Indian film fraternity. A doting son, a dedicated director and a hard work nature have all helped him to be what he is today. We are talking about no one else than the one and only and the real star of the house, Karan Johar.

There is no denying the fact that a director’s life isn’t an easy sail and it’s hard to even imagine wearing their shoes. With the tight-packed schedules and so much of travel, Karan’s lifestyle is an erratic one. In spite of all this, he is now looking absolutely fit and has lost extra kilos. (READ: 9 Celebs Who Had A Drastic Weight Loss And The Diet They Followed) 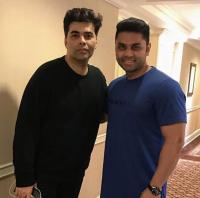 Father to two beautiful babies (a son and a daughter, read more) is giving some outstanding fitness tips these days. And the credit to his commendable weight journey goes to his discipline, dedication to staying healthy and fit, and a strict workout and diet regimen and of course, his trainer Kunal Gir. He is the same trainer and fitness consultant who has been giving personal training to Ranbir Kapoor for the Sanjay Dutt biopic. In fact, Ranbir only suggested Kunal to Karan.

Sharing a little bit of how Karan shed those 17 kilos and 11 inches off of his waist in just 4 months, Kunal told Vagabomb:

“We alternate between weight training and water workout four times a week.”

You May Also Like: Secret Behind Sharddha Kapoor's Soft And Shiny Hair Is This Magical Mask Made Of Aloe Vera

"When we first met, Karan told me he enjoyed swimming, so I’ve tried to incorporate a high-intensity cardio session in the water as a substitute to regular cardio—and it’s a lot more intense.”

And as far as his diet is concerned, it is reported that he is stick to a no-sugar, no-direct-carbs diet along with organic vegetables. Also, he prefers protein from meats and eggs which is high in omega 3 that means even the chicken has to follow a healthy diet by having flax seeds.

Don't Miss: For His Role In 'Padmavati', This Is The Fitness And Diet Regime That Ranveer Singh Followed

Kunal was quoted as saying:

“He eats every three hours. He only eats food cooked in macadamia nut oil, and his fibre intake has increased since his body now responds to higher amounts of fibre.” 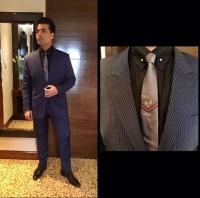 The fitness trainer even revealed that Karan never misses his workout and is very strict with his diet as well. He makes sure to do his workout at least three days a week if not four. Here’s what the portal quoted Kunal as saying:

“A lot of people lose muscle mass instead of burning fat and that makes them weak. But Karan’s dedication to exercising and a good, healthy diet has ensured he’s not lost any muscle mass but burned mostly fat.”

Now, this is seriously commendable. Karan Johar’s weight loss journey is truly an inspirational one and will inspire many to get back in shape. What do you guys think of this, do share your views in the comments section below!

NEXT READ: Shahid's Fitness And Diet Routine For 'Padmavati' Is Every Vegetarian Fitness Goals