An Indian film actor, director, screenwriter, producer, playback singer and lyricist, Kamal Haasan has been reigning in the Tamil industry all this while and is a big name of Indian cinema. Not only his professional but his personal life too has been an open book. So much has been talked about his love life and is still talked about. There have been many women in his life, but unfortunately, no relationship of his was a success.

Recommended Read: Despite Many Link-Ups, Legends Jaya-Amitabh Have Been Together For 44 Yrs; A Time-Tested Love Tale! Right from yesteryear actress Srividya, dancer Vani Ganpathi, Gujarati actress Sarika to actress Simran Bagga and Goutami, Kamal’s relationships have been the talk of the town always. It has always been the other woman in his life who has disrupted his current relationship. Out of all these women, he only married Vani and Sarika. In fact, in an interview with Pinkvilla sometime back, he stated:

”I never believed in marriage. People marry because of peer pressure but I don’t subscribe to the ‘herd mentality’. I shouldn’t have married. I married for the convenience of my women. Vani wouldn’t live-in and I wasn’t strong enough to put my foot down. And the society was such that Sarika and I couldn’t book a hotel room together even after we had two daughters.”

Don't Miss: Actors Who Cheated On Their Wives With Other Women, But Were Still Accepted By Their Wives 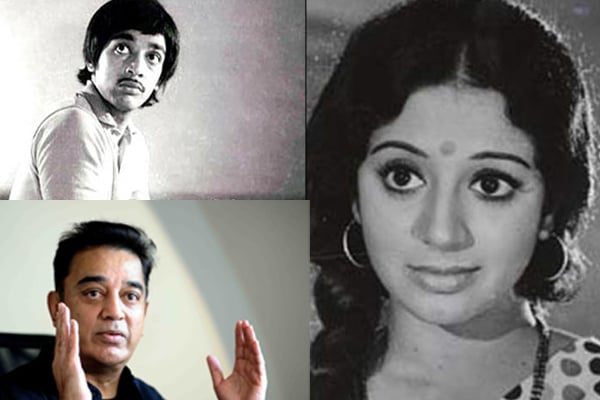 In Kamal’s early days of career probably in the 1970s, his first link-up news came out in open and it was with actress Srividya, who was two years elder to him. Srividya and Haasan have shared the screen space with each other in a number of movies and the most famous one was Apoorva Raagangal.

But their relation didn’t last long and Srividya went on to marry George Thomas who was an assistant director in Malayalam films. In 2006, Kamal even visited Srividya in the hospital when she was lying on her deathbed. In fact, the 2008 Malayalam film Thirakkatha is inspired by their love story. This was one and the only subdued relationship of Kamal. Soon after breaking up with Srividya, Kamal fell in love with a famous dancer of that time Vaani Ganapathy in 1978. There is not much known about how they met and all, but one thing is for sure that they were introduced through common friends. Even though Kamal doesn’t believe in the institution of marriage, he went on to tie the knot with Vaani as she wasn’t comfortable in a live-in relationship. 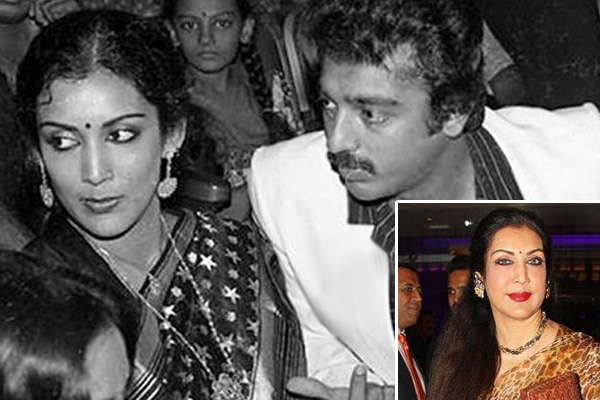 All was going well between the two and they were having a smooth run with their wedding until Sarika came and Kamal got entangled with her in the year 1988. After 10 years of being together in the nuptial knot, they ended their marriage. It is also reported that the other reason why they went separate ways was probably that Vani couldn’t conceive. 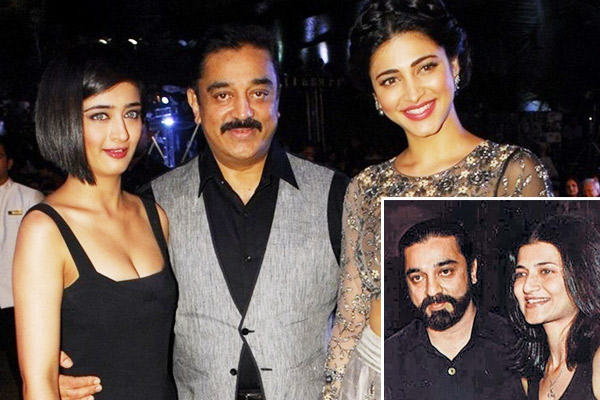 Haasan’s affair with Sarika was an infamous affair of that time and they didn’t even bother to keep it under the wraps. Kamal entered into the relationship with Gujarati actress Sarika (who was a known name in Bollywood) even before he was legally separated from Vani and they started living together. And being in a live-in relationship, they had two beautiful kids named Shruti Haasan and Akshara Haasan, both of them are now Bollywood actresses. This is what sent ripples down the media and the film industry, but the actor stayed blatant about it, courtesy his happiness with live-in.

You Must See: 14 Bollywood Love Marriages That Ended In Shocking Divorce 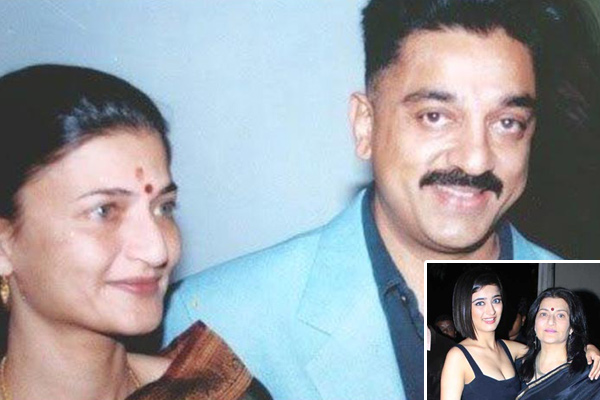 Since their children were out of wedlock, societal pressure started pouring in. So, Sarika and Kamal walked down the aisle in 1988. And he applied for divorce with Vani much later in 2002. Everything was going fine between Kamal and Sarika until another woman came in between, and it was none other than Sarika’s best friend, Goutami and started having hots for co-star Simran Bagga.

The same year when Kamal applied for divorce from Vani, Sarika applied for divorce from him as she saw him flirting with her best friend Goutami. Kamal’s philandering ways with Simran didn’t go unnoticed by Sarika, and it is said she was deeply disturbed by it. She even attempted suicide and went into serious depression after that. Ending their 16 years of marriage, Sarika and Kamal’s divorce was finalised in the year 2004. 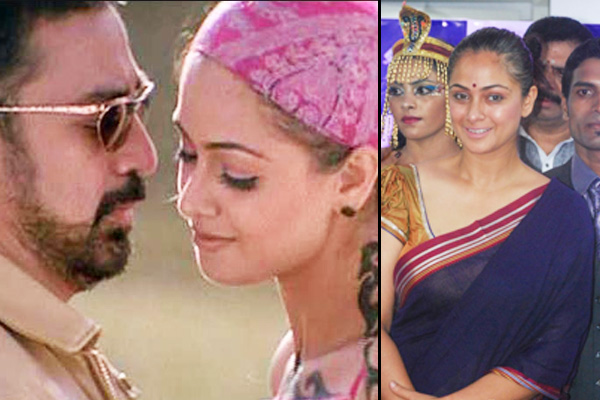 And then, comes the deal-breaker when Kamal has an affair with his then co-star and popular Tamil actress, Simran Bagga while he was still in a relationship with Sarika and Goutami. Even though Simran was 22 years younger to him and he was very much married, nothing stopped him from falling in love with her.

Kamal and Simran first met probably somewhere in the 2000s. They became well acquainted with each other in the year 2001, whilst the shoot of their film Pammal K. Sambandam. By the end of it, the two started having hots for each other and buzz was that they shared a romantic rapport. However, Simran and Kamal’s relationship was short-lived and she moved on and married another man.

Check This Out: 11 Bollywood Divas Who Were Blamed For Breaking Marriages And Becoming 'The Other Woman' 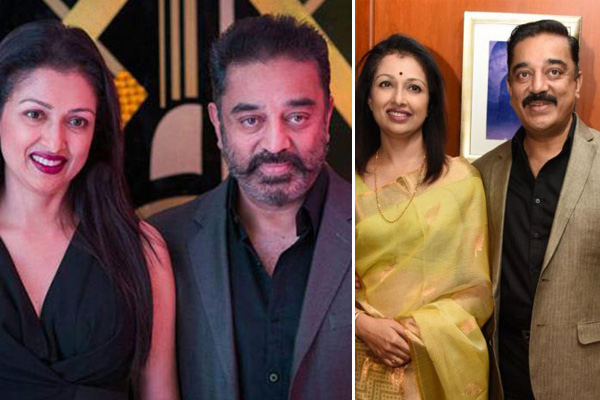 After Simran’s chapter closed, Kamal went ahead and started a live-in relationship with actress Gautami. She came into his life with her daughter from the first husband. After spending more than a decade together in a live-in, their relationship went kaput and they decided to part ways. On November 1, 2016, Goutami took to her blog and officially announced the partition. This is what she wrote then:

"It is heart-breaking for me to have to say today that I and Mr. Haasan are no longer together. After almost 13 years together, it has been one of the most devastating decisions that I have ever had to make in my life. It is never easy for anyone in a committed relationship to realise that their paths have irreversibly diverged and that the only choices in front of them are to either compromise with their dreams for life or to accept the truth of their solitude and move ahead.” “It has taken me a very long time, a couple of years at the very least, to accept this heartbreaking truth and come to this decision. It is not my intention to seek sympathy or assign blame. I have understood through my life that change is inevitable and human nature will define that change for each individual. Not all of these changes might be what we expect or anticipate but that does not, in any way, negate the very real impact of these diverging priorities in a relationship. This decision to set forth on my own at this stage in my life is perhaps one of the most difficult decisions any woman will ever have to make but it is a necessary one for me. For I am a mother first and foremost and I have a responsibility to my child to be the best mother that I can be.”

Check Out: 10 Celeb Couples Who Did Not Let Their Distraught Relationship Affect Their Families “And to do that, it is essential that I am at peace within myself. It is no secret that I have always been a fan of Mr. Haasan’s since before I came to the film industry and I continue to admire and cheer on his monumental talent and achievements. I have stood by him through all his challenges and they have been precious moments for me. I have also learned a great deal from working with him as costume designer on his films and I’m proud that I was able to do justice to his creative vision in those films.” “Along with all of his accomplishments to date, I know that there is much more to come from him for his audience and I look forward to applauding those successes. I would like to say that I am sharing this monumental happening in my life because I have always lived my life in your midst, with dignity and grace to the best of my ability at all times, and all of you have been a part of my life’s journey in so many ways. I have received so much of love and support from you through the past 29 years and I would like to thank you for the many ways in which you kept me going through the darkest and most painful times in my life."

Irrespective of what all happened in their relationship, Goutami and Kamal have always been there by each other’s side. In fact, when she was battling cancer, Kamal was there for her offering his full support.

Recommended Read: This Is Why Rekha Wears 'Sindoor' All The Time, Even After Her Husband Committed Suicide

So, these were a few ladies with whom Kamal Haasan was involved. He has been very unlucky when it comes to love and marriage. If you think that we have missed out on something in it, do let us know in the comments section below!