The reality show, Bigg Boss really tests your inner feelings and brings out the best or worst inside you. It can either strengthen your bond with the people inside the house or may damage it forever. While we have seen many people fall in love on the show, this is the first time that we have seen an alleged couple finally accepting their feelings for each other. Yes, we are talking about Jasmin Bhasin and Aly Goni. Aly had entered the show for the sake of Jasmin Bhasin and their cosy moments and loved up conversations had made their fans pray for them to accept their feelings. However it had happened, when the two had to face separation. (Also Read: Ankita Bhargava's Daughter Mehr's Pose Got All Our Attention In The Family Photo From The Maldives)

It was on the weekend ka vaar, when Jasmin Bhasin had left the show after her journey of 100 days and her best friend-cum-lover, Aly Goni was left heartbroken, pleading to go with her. Aly’s tears and love for Jasmin had made the nation cry and had also made them realise how much they love each other. In the end, when Jasmin was leaving the show, we could hear them confess their love for each other as Aly had said, ‘I love you’ and Jasmin had replied, ‘I love you too baby’. The two had finally confessed their feelings for each other and their fans had danced with joy.

Now, post accepting her feelings for Aly, Jasmin is on cloud nine as she doesn’t mind screaming out her feelings for Aly in public. After her eviction from the show, Jasmin Bhasin is often spotted spending time with her close friends and in fact, Bharti Singh and Haarsh Limbachiyaa were the first ones, whom Jasmin had visited after stepping out of the show. The actress was spotted on a dinner date with her friends, Bharti, Haarsh, Punit Pathak and his wife, Nidhi Moony Singh. After the outing, they all posed for the paps where Jasmin and Bharti interacted with the paparazzi. When a pap asked Jasmin, what she has to say for Aly, she screamed, "I love Aly and I want him to get the trophy." Soon after, Bharti can be seen saying, "I love Haarsh and I want to marry him." Take a look:

In a conversation with Delhi Times, Jasmin Bhasin had openly confessed her feelings for Aly stating that they were initially friends, but now she loves him dearly and if their families agree, she will definitely not wait for anything to marry him. She had said, “I have fallen in love and it’s a beautiful feeling. I don’t mind getting married this year, my parents are okay with it. Once Aly comes out, they will meet his parents. We need to know what his parents have to say about it. I have met them a few times, but pehle hum sirf dost thay. Once they approve our relationship, phir main wait nahi karungi, I will get married. I know Aly is the one for me.” (Don't Miss: Ishita Dutta's Husband, Vatsal Sheth Helps Her With Kite Flying On The Occasion Of Makar Sakranti) Jasmin had talked about her wedding with Aly during the show as well. On December 10, 2020, in a promo clip released by the makers of Bigg Boss 14, we could see Jasmin having a conversation with Bigg Boss 2 fame, Rahul Mahajan about her wedding plans with Aly. Rahul could be seen teasing Jasmin by her rumoured boyfriend, Aly Goni's name and had started talking about their wedding. After which, we could see Jasmin blushing and saying, "Mujhe mera Aly lautao". Going further in the promo clip, we could also see Kashmera Shah advising Jasmin that Aly is a great guy and is madly-in-love with her. She had said, "He loves you. Bahut acha ladka hai yaar. Abhi off-camera bolti hu. Esa pati jis kisi ko mile..vo naseeb wala." (Must Read: Divya Agarwal Enjoys A Guitar Session With Boyfriend, Varun Sood, Later Goes On An Ice Cream Date)

We cannot wait for Jasmin and Aly to reunite and get married! 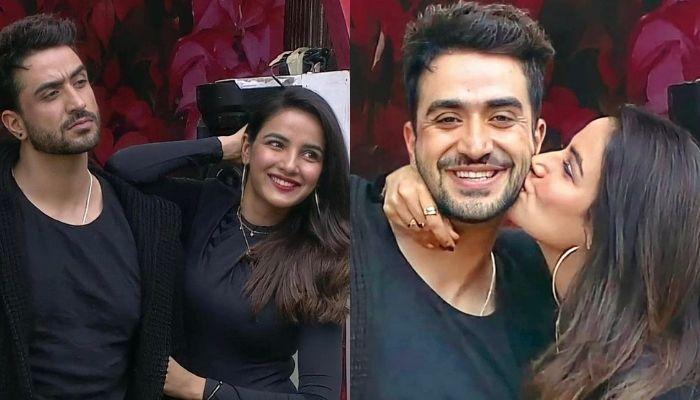 What is love if your partner cannot turn into a cook, electrician, plumber, chauffer or hairstylist for you? Well, Aly Goni and Jasmin Bhasin are setting the standards of love really high as they do not mind being anything and everything for one another. From Jasmin making iftari for Aly

When Shah Rukh Khan Had Made Fun Of His Wife, Gauri Khan's Cooking Skills During An Event

When Manushi Chhillar, Miss World'17 Left Everyone Spellbound With Her Look At Her Sister's Wedding

Rubina Dilaik Broke Down To Tears While Sharing Her COVID-19 Experience, Feels Lucky To Have Abhinav

Ravi Dubey And Sargun Mehta's Home Has A Wall Full Of Their Framed Photos, He Shares A Glimpse Of It

When Shah Rukh Khan Had Made Fun Of His Wife, Gauri Khan's Cooking Skills During An Event