On February 24, 2019, the nation woke up to the news of legendary actress, Sridevi's untimely demise and it really broke everyone's heart. Everyone who heard this news in the middle of the night assumed it could be just another celebrity death hoax, but unfortunately, it wasn’t. Time flew by so fast that we couldn’t believe it will be one year on February 24, 2019, since the legendary actress passed away. (Also Read: Karisma Kapoor Shares A Perfect Family Pic On Randhir Kapoor's Birthday, Taimur Ali Khan Was Missed)

Ahead of her first death anniversary, the Kapoor clan held a puja in the memory of beloved Sridevi’s mrityu tithi as per Hindu calendar, which fell on February 14, 2019, though the date being February 24, 2019. Sridevi's husband, Boney Kapoor, their daughters, Janhvi Kapoor and Khushi Kapoor, her brother-in-law, Anil Kapoor performed the puja at her maternal home in Chennai. As per a source, "The puja happened in the morning at her Mylapore bungalow with only close friends and relatives." Here are the pictures of the same: At the Vogue Beauty Awards 2018, Janhvi felt weird walking the ramp without her mother’s hand to hold on to. She got emotional and expressed, “It’s a special feeling. But it’s a little weird too because I’m so used to accompanying mom and dad to these things… I always had their hands to hold. So, I don’t know whose hand to hold. I am a little nervous.” In a throwback interview, Janhvi shared the camaraderie with her mom and had said, "Of course. I could always be the baby with her. When I’d wake up, the first thing I’d do was ask for her. I’d need her to put me to sleep sometimes and she literally had to feed me. The day before she left for the wedding, I had to shoot, but I couldn’t sleep, so I was like, “I need you to come and put me to sleep.” But she was packing, so by the time she came to me I was half asleep. But I could feel her patting my head. I’ve always been very bad at that. Khushi is very maternal with me. I am a full baby. She takes care of me. Now she comes and puts me to sleep sometimes." (Also Read: Mira Rajput Kapoor Bribes Misha Kapoor For Mushy Pictures Which Radiate Pure Mother-Daughter Love) After the sudden demise of Sridevi, Janhvi Kapoor wrote an emotional tribute for her mother, which could be read as, “There is a gnawing hollowness in my chest that I know I’ll have to learn how to live with. Even with all this emptiness, I still feel your love. I feel you protecting me from sadness and pain. Every time I close my eyes, I only have good things to remember. I know it’s you doing that. You were a blessing in all our lives, we were blessed to have had you for as long as we did. But you weren’t meant for this world. You were too good, too pure, too full of love. That’s why he took you back. But at least we had you.” 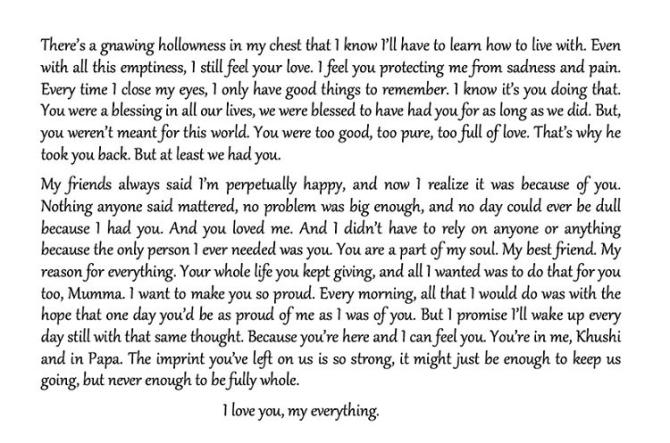 It further stated, “My friends always said I’m perpetually happy, and now I realise it was because of you. Nothing anyone said mattered, no problem was big enough, and no day could ever be dull because I had you. And you loved me. And I didn’t have to rely on anyone or anything because the only person I ever needed was you. You are a part of my soul. My best friend. My reason for everything. Your whole life you kept giving, and all I wanted was to do that for you too, Mumma. I want to make you so proud. Every morning, all that I would do was with the hope that one day you’d be as proud of me as I was of you. But I promise I’ll wake up every day still with that same thought. Because you’re here and I can feel you. You’re in me, Khushi and in Papa. The imprint you’ve left on us is so strong, it might just be enough to keep us going, but never enough to be fully whole. I love you, my everything.” In an interview with Mumbai Mirror recently, the late actress’s brother-in-law, Anil Kapoor shared that people like Sridevi were difficult to forget. He was quoted as saying, “She was my brother’s wife and my wife’s friend as they connected really well. Whenever we met there was always fun, laughter and humour. People like Sri ji are difficult to forget. Her body of work is fabulous and inspiring. Her films are still being seen and pictures still being published everywhere. She will always be missed.” (Also Read: Abhishek Bachchan's Heartfelt Note For Amitabh Bachchan On Completing 50 Years In The Industry) Can’t believe it’s almost a year since Sridevi passed away! Lots of strength to the family to deal with the humongous loss. 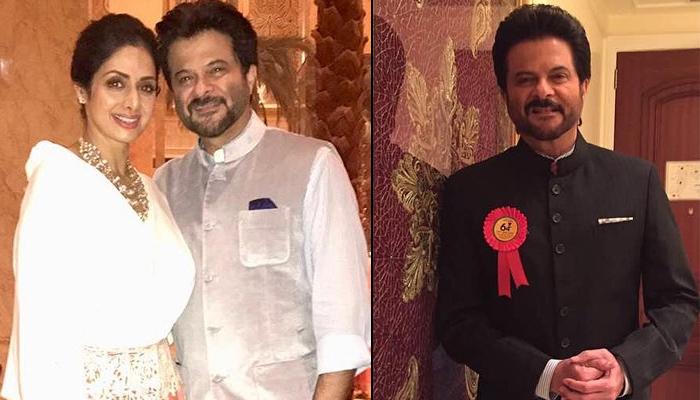