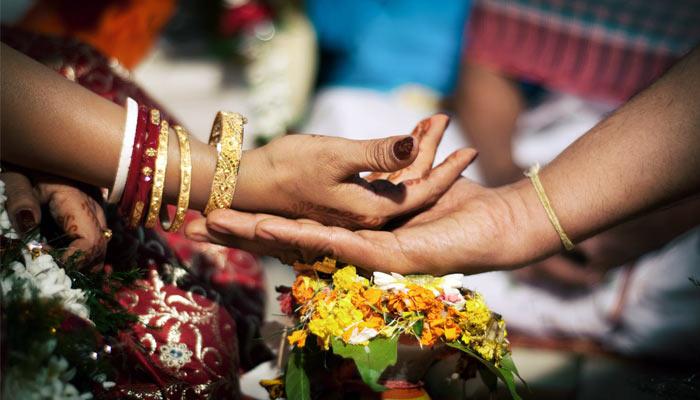 Certain things make you believe that humanity still exists. They restore one’s faith that people still care about each other. And, make you believe in the fact that there exists a beautiful life beyond all the disheartening cases of theft, burglary and rapes that take place every single day. You must be wondering why we are talking about all this here and what all this has got to do with a wedding?

Meet the couples who changed the entire concept of ‘wedding gifts’ and took it to a whole new humanitarian level. They asked their guests to bring in no gifts, but instead convinced them to donate blood and their body parts for the needy. A while ago, we shared this heartwarming story of an American couple who held a blood donation camp at their wedding. We feel proud to share about the following families who took humanity to an all new level.

Dr. R.B Bhesania, who practices in Vadodara, Gujarat, surprised everyone at the wedding with his unbelievable deed when he asked the guests at his daughter’s wedding to donate blood and their body parts. He himself had been spreading awareness about blood and organ donation for years. So, what better opportunity to educate people than at his own daughter’s wedding? While talking about the occasion, he was quoted as saying,

The idea was to spread awareness about donating blood and organs. A wedding is an auspicious occasion to make people understand the importance of life. My daughter Dhvani and son-in-law Jay Pandya (both doctors) readily agreed to donate their blood on the wedding day. It was the best wedding gift for us.

The guests were greeted with a red rose each, and the couple of honour kick-started the celebrations by donating their blood first. Dr. Bhesania also stated,

We had decided not to give any gold or valuables to our daughter. Instead, we asked the couple to take a pledge they would donate their blood and body as well. The couple also took the pledge that they would not support female foeticide, stay away from tobacco products and encourage others for blood and organ donation.

This event went on to be registered in the Guinness Book of World Records and Limca Book of Records. Not only were 375 bottles of blood collected in this spectacular endeavour.

Also Read: This Couple Decided To Be Their Own Wedding Planners And The Result Is Stunning

Another wedding where the noble cause of blood donation was promoted was at Suvendu Kumar Pratap’s wedding in Chandol Village of Kendrapara district, Odisha. The newlyweds surprised their guests by asking them to donate blood and to their surprise, most of them participated to make this event a hit. One of the volunteers from the organiser of the event Ama Odisha, Sachikanta Nath stated,

It was an unusual occasion, as the donors had not made up their minds to donate blood. They had come to attend the wedding reception. However, they spontaneously donated blood. In the past, we have organized blood donation camps at various places. But this was different. The organisers on most occasions struggle to arrange for donors, but the number of donors hardly reach double digits. But, tthe  blood donation camp was a different story altogether.

Recommended Read: What Her In-laws Did When Her Own Family Refused To Attend Her Wedding Will Really Surprise You

Pratap said that it was a charitable organisation that encouraged him to put this idea into action and to encourage the other guests, he and his wife Suchitra were the first ones to donate blood. He stated,

My father Pramod Pratap also encouraged me to go ahead with this noble mission.

A very positive and excited Suchitra was quoted saying,

This was the first time I have donated blood. I was in awe. But, I felt relieved after donating blood. Blood donated by me could save someone’s life.

Not only the couple but the guests too were very appreciative of this unique gesture. They said that it was an exemplary gesture on the couple’s part. A few also said that they would now donate blood more often.

Kudos to these two couples for setting such beautiful examples for the country to follow. Not only are weddings auspicious occasions, but also a great way to promote and educate a lot many people about such noble deeds. Here is wishing these two couples a blissful life ahead along with the blessings of all those people whose lives the donated blood at their weddings saved!