She is the one, who’s unconditional love teaches us the most valuable lesson of life. Just resting our head in her lap after a stressful day makes us forget all our worries. She is where we find utmost solace and she always puts us before her in every situation. She is our mother. But how are mothers-in-law different from our own mothers? Just like every relationship, including the one we share with our mothers, there are ups and downs in our bond with mothers-in-law too. But that doesn’t make that relationship any less special in our lives. A mother-in-law too, is a significant part of a girl’s existence in her phases of life, and the world without them is nothing but chaos. (Also Read: Rohanpreet Singh's Family Cheers For Bhabhi, Neha Kakkar In Ring Finding Ceremony, Find Out Who Won!)

Do you remember the British−Mauritian model-actress, who danced in the Kahin Pe Nigahein remix? Yes, it is Hazel Keech, who rose to fame with her role of Kareena Kapoor Khan’s best friend in the film, Bodyguard and participating in the most controversial reality show, Bigg Boss 7. It was in 2015, when cricketer Yuvraj Singh had announced his engagement with Hazel, leaving everyone surprised. Hazel and Yuvraj had known each other since 2012 but it was only three years later that the two had made their relationship official. Hazel shares a special bond with Yuvraj’s mother and her IG posts are proof of the same.

Hazel Keech Reveals The Truth About Her Pregnancy, Yuvraj's Mother Responds To The Same To mark Yuvraj Singh’s mother’s birthday on October 26, 2020, her doting daughter-in-law, Hazel Keech posted a beautiful picture on her IG handle. In the picture, while Hazel looked gorgeous in a red-coloured saree, her mother-in-law proved to be an epitome of grace in a perfectly coordinated suit with her bahu. Hazel captioned her post as “Happy Birthday Sasu Ma” followed by a red heart. On Mother’s Day 2020, Hazel Keech had posted a picture from one of her wedding ceremonies as she had looked stunning in a white gown, flaunting her bridal chooda. Celebrating the three amazing mothers in her life, including her mother-in-law, Hazel had captioned the post as “An old photo but also the only one with all three of you mothers in it! Happy mothers day to 3 most amazing mums in my life! I learnt from all of you- how to and how NOT to be as a mother haha. So I will incorporate the best of all of you when my turn comes! Love you and blessed to have you in my life mothers, a day to celebrate you is apt!” (Also Read: Priyanka Chopra Reveals What Exactly Mom, Madhu Chopra Said After She Won The Title Of Miss World) 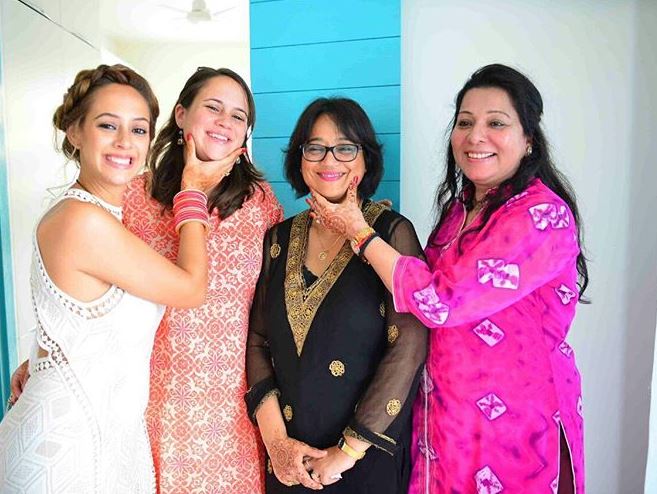 Last year, when Hazel Keech had undergone a nose surgery for a chronic problem that she was facing for a long time, she had posted a picture of herself and one with her mother-in-law informing about the same. Revealing why she was missing in action from social media, Hazel had written, “I’ve not posted in a while so I thought I would fill you in on where I’ve been hiding (those of you who were wondering).” Acknowledging her mother-in-law’s support during that time, Hazel had continued, “A month ago I had a surgery to fix my nose- for as long as I can remember I’ve struggled to breathe through my nose, although not a serious health issue, a chronic one that I just learnt to live with... Lucky enough for me it annoyed my mother-in-law so much that she finally took me to a hospital, because of which we came to know just how much internal damage there was and understood the problem! So thanks to her I have a new nose (internally) and for the first time in my life I can now breath freely and easily.” Hazel Keech had added that due to her surgery, she had to skip her workout, because of which she gained a few extra kilos and this was why she had avoided posting pictures of herself on social media. Hazel had concluded her note with “Due to the surgery I’ve not been active or able to exercise yet, so I’ve put on some weight hence staying away from social media! But fuck it, here I am, better than ever, breathing happily, all thanks to my mother in law who’s receiving blessings from me everyday because finally, finally I CAN BREATHE!!!! It goes to show you, you never know what can lead to where, the things we live with and consider “normal” and sometimes it takes annoying someone to have the best outcome!!!! Love you Shabo! Happy belated mothers day.” (Also Read: Kareena Kapoor Khan Tags Ex, Shahid Kapoor On 'Jab We Met' Post, Ishaan Khatter And Alia Bhatt React) Hazel Keech Reveals The Truth About Her Pregnancy, Yuvraj's Mother Responds To The Same