Hansika Motwani posted pictures from her 'chunni' ceremony, and she looked like a vision in red.

Actress Hansika Motwani is on cloud nine as she tied the knot with her soulmate, Sohael Khathuriya. Hansika and Sohael’s wedding glimpses have been trending on social media for quite some time now. And now the gorgeousness gave glimpses of her chunni ceremony, and they are simply unmissable.

On December 8, 2022, Hansika took to her IG handle and posted ethereal pictures from her chunni ceremony with her then hubby-to-be, Sohael Khathuriya. In the pictures, Hansika looked stunning in a red mirror work saree, which she complemented with a necklace, matching earrings and maang teeka. In the picture, Hansika’s mother, Mona and brother, Prashant were seen performing her chunni ceremony, and the bride-to-be couldn’t help blushing.

Also Read: Anu Aggarwal On Fame After 'Aashiqui', Recalls Being Mobbed By Thousands Who Banged Her Car 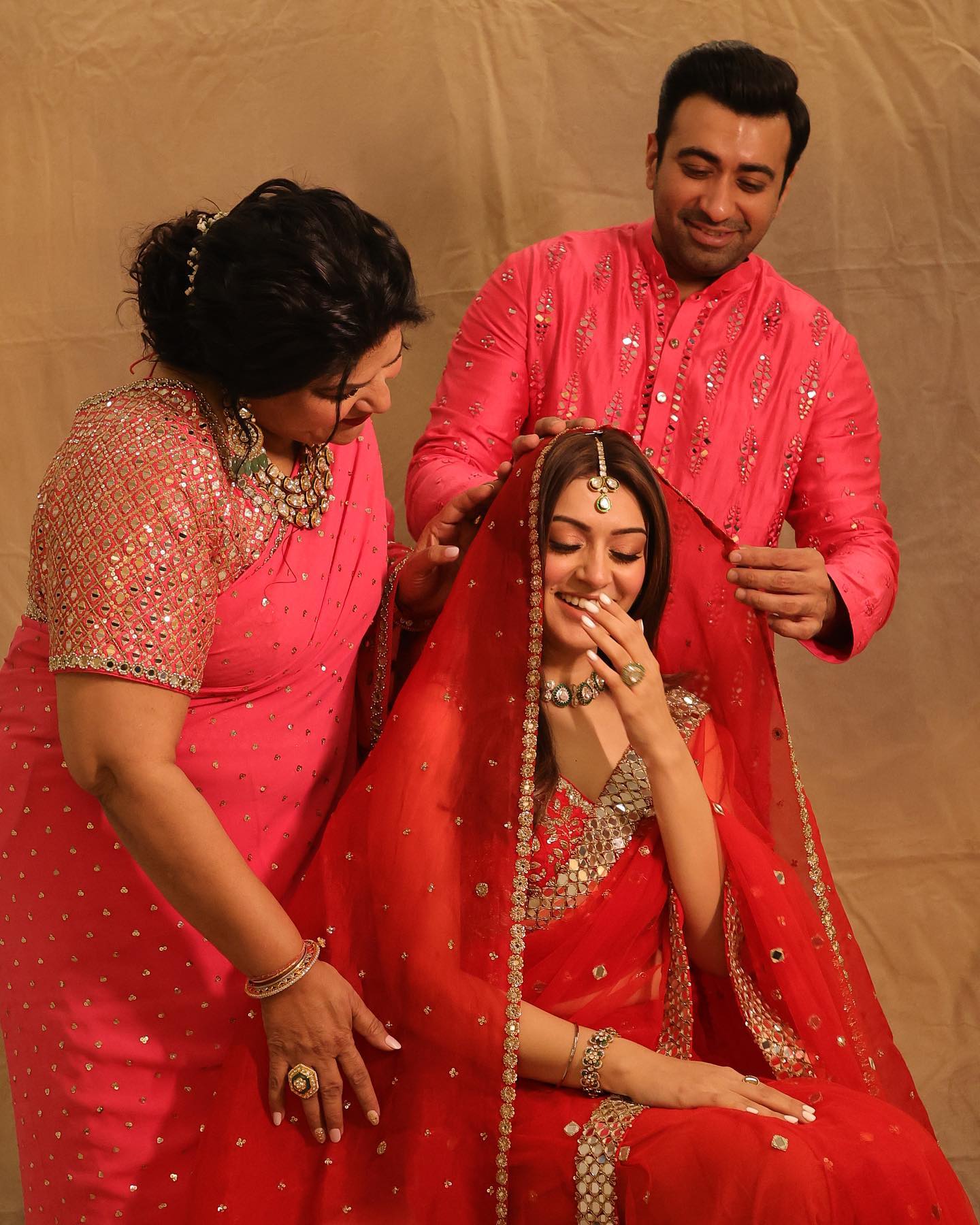 In the other pictures, Hansika was seen posing with her then-to-be-groom, Sohael Khathuriya, who twinned with her in a matching mirror-work red kurta and pyjama. The couple was also seen posing for a family portrait along with Hansika’s mother and brother. The beautiful actress captioned the pictures with a sparkle emoticon. 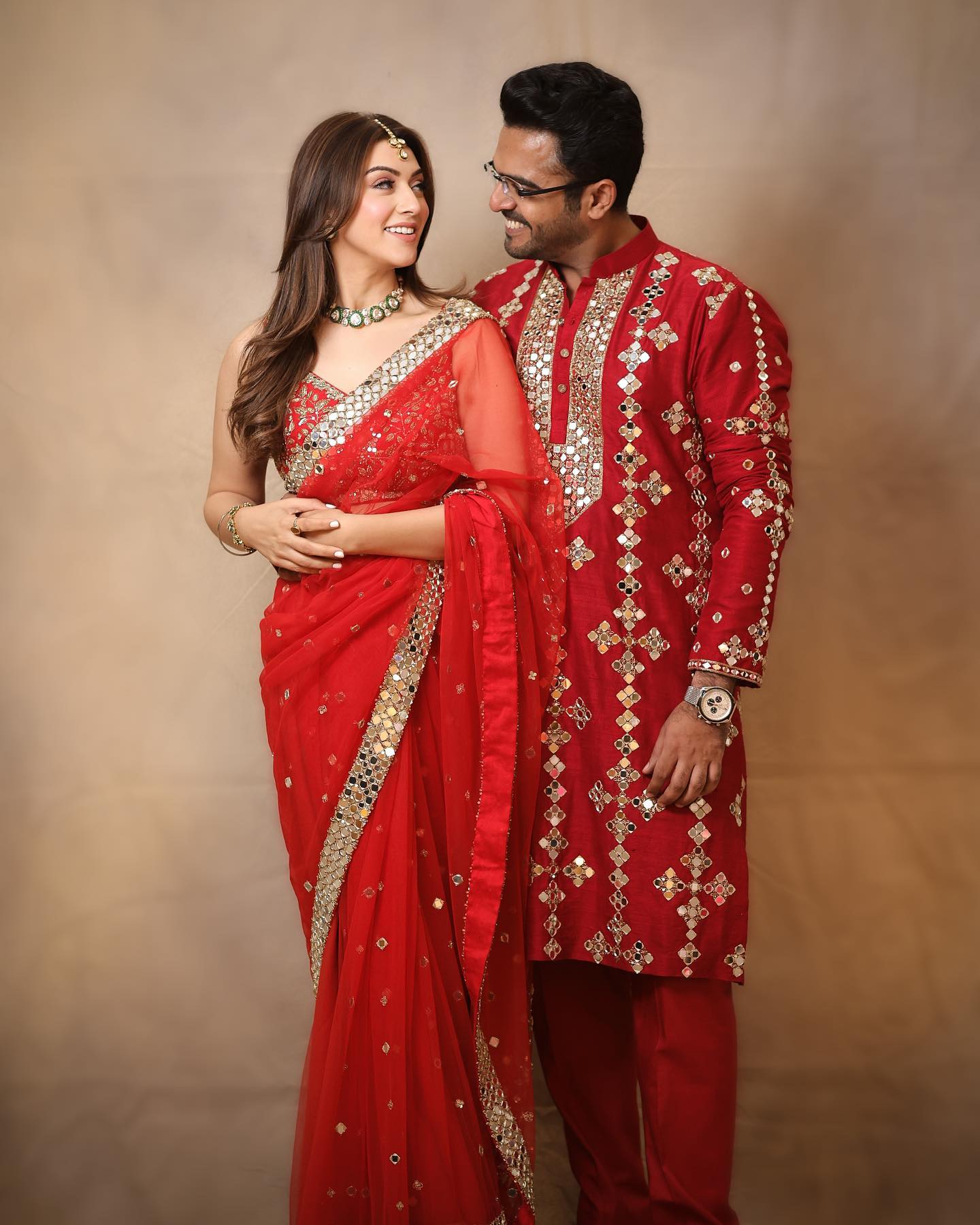 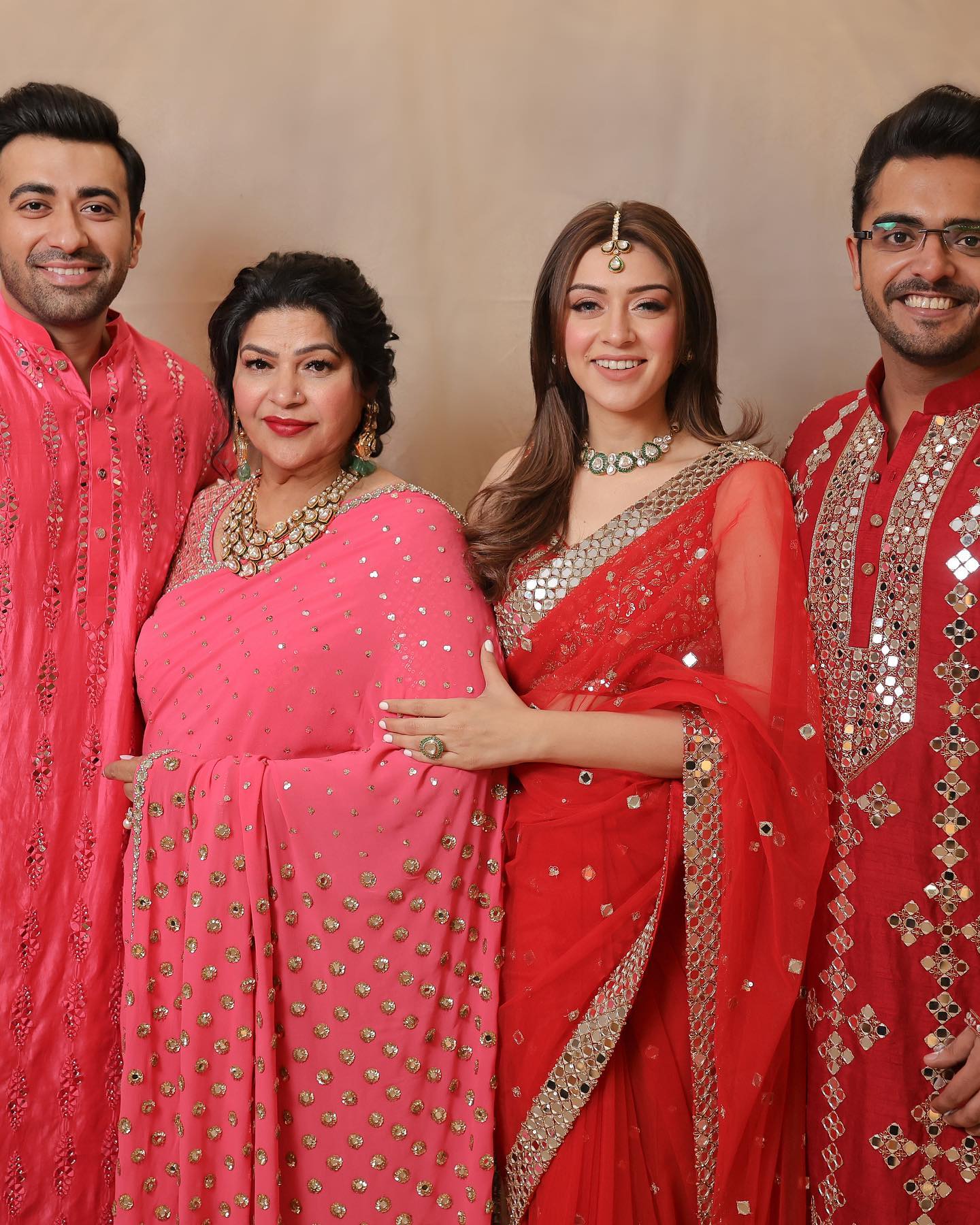 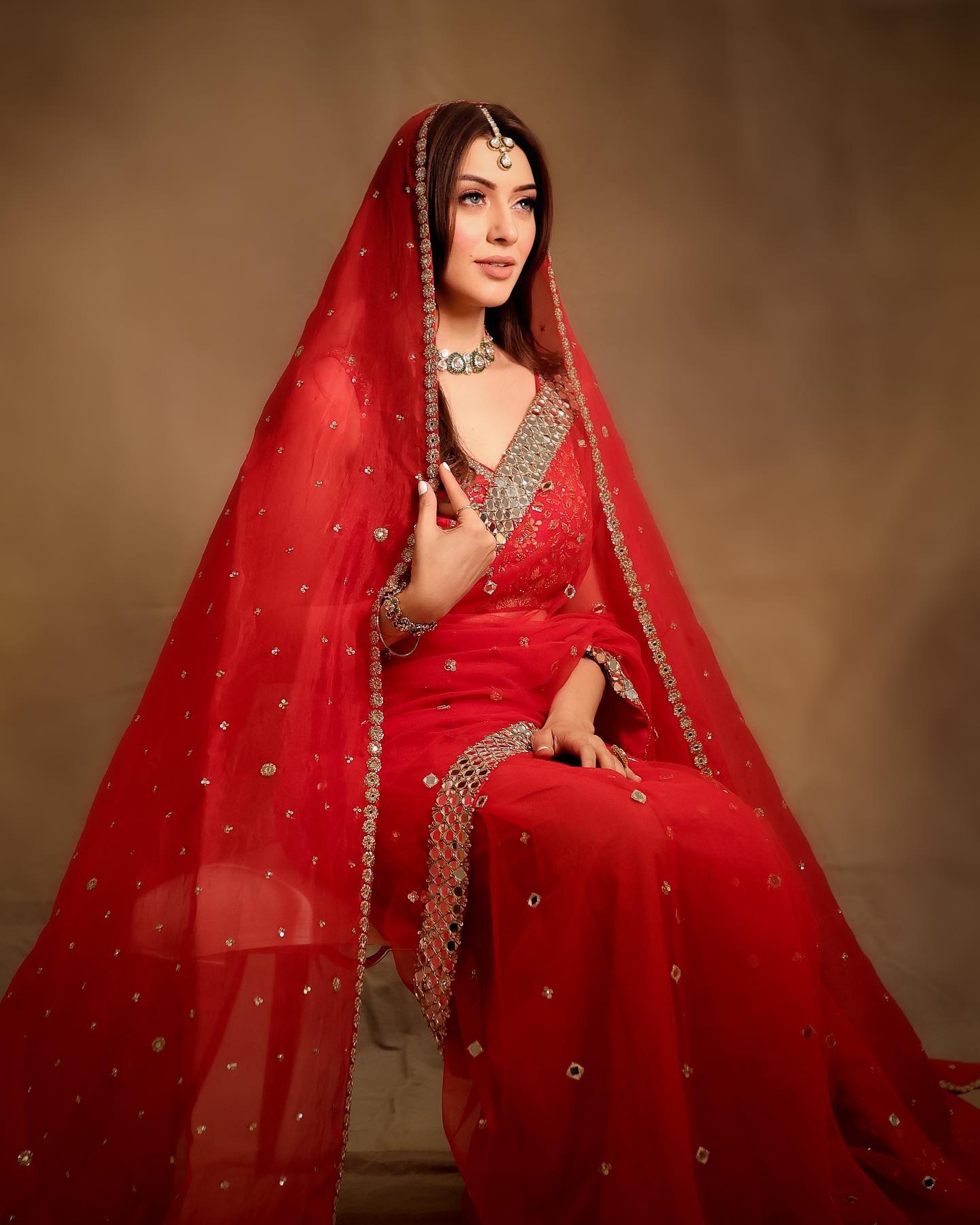 A few days back, Hansika Motwani shared pictures from her royal wedding with her long-time boyfriend, Sohael Khaturiya. In the pictures, the then-bride and groom were beaming with joy as they performed their wedding rituals. 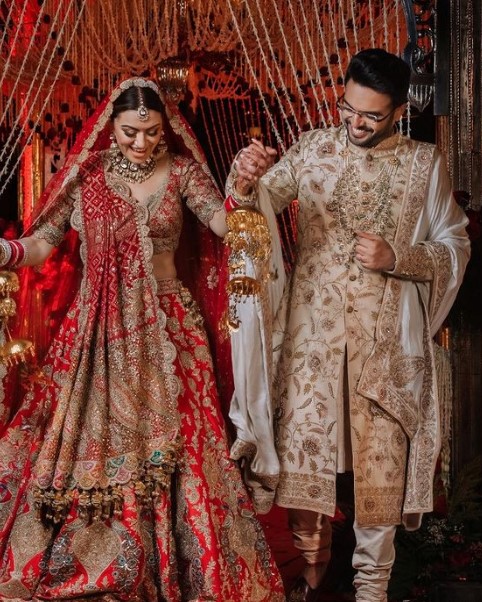 In one of the pictures, Sohael could be seen applying sindoor on his bride, Hansika's forehead, while the second picture showed the couple taking the pheras at their wedding mandap. Sohael and Hansika looked stunning in their respective wedding ensembles and it was indeed a picture-perfect moment. 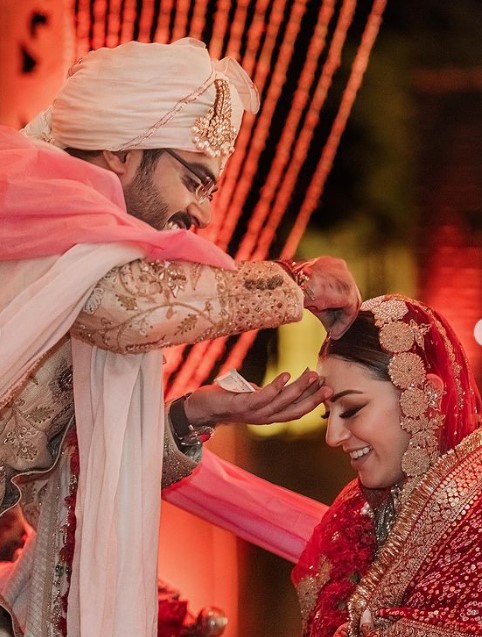 On December 5, 2022, Hansika posted the first picture after her wedding. In the photo, Hansika was showing off her mehendi-clad hands. She also flaunted her huge diamond ring and chooda. Atop it, she tagged her husband, Sohael with a heart emoji. Isn’t Hansika looking dreamy? What do you think? Let us know.

Also Read: Honey Singh Introduces Tina Thadani As His Girlfriend, Reveals How She Gave Him A New Identity 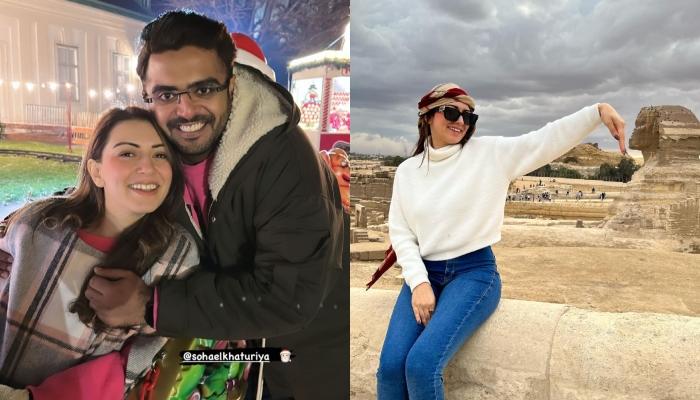 Bollywood actress, Hansika Motwani is enjoying the blissful phase of married life, along with the man of her dreams, Sohael Khaturiya. From hosting a week-long dreamy wedding at Jaipur’s Mundota Fort and Palace, going on an adventurous honeymoon in Budapest, Turkey, to acing new married couple skills and many more, the couple's respective IG handles