Television actress, Drashti Dhami is enjoying her alone time with her hubby, Neeraj Khemka in the Maldives. Check out her lovely pictures!

There is no greater joy than to travel around the world with your better-half. Someone, who is ready to handle you when you get travel sickness or when you forget the way to your room after having a few shots of vodka. Sadly, the COVID-19 pandemic had ruined many couples plan of travelling in the year 2020. But now, many couples are travelling to new places with their loved ones. And television actress, Drasthi Dhami also took off to the Maldives with the love of her life, Neeraj Khemka. (Recommend Read: Hina Khan's Beau, Rocky Jaiswal Shares Their Unseen Romantic Picture, Calls Her His Life's Purpose)

Before, we take you further into the story, let us take a recap of Drashti and Neeraj's love story. The actress had tied the knot with the man of her dreams on February 21, 2015. According to reports, Drashti and Neeraj had a love marriage that was arranged by their families. They were in a steady relationship for six years before getting hitched. However, the starlet never let the details of her relationship get into the media and had always claimed to be 'single'. But seeing her adorable social media PDAs proves that she has always been in love with Neeraj.

Mohena Kumari Singh Shares A Cute Picture With Her Hubby, Suyesh Rawat From Their Mussoorie Trip Drashti and Neeraj are currently in the Maldives for their sixth wedding anniversary and the former has been giving us a digital tour of her vacation. A couple of days ago, she had posted a picture from the pool. She was donning a gorgeous floral-black bikini and had been enjoying her view. Along with it, Drashti had written, "Life is really better by the pool". Later, she had posted a sizzling hot picture, which gave a wonderful view of the Indian ocean. Check it out below: 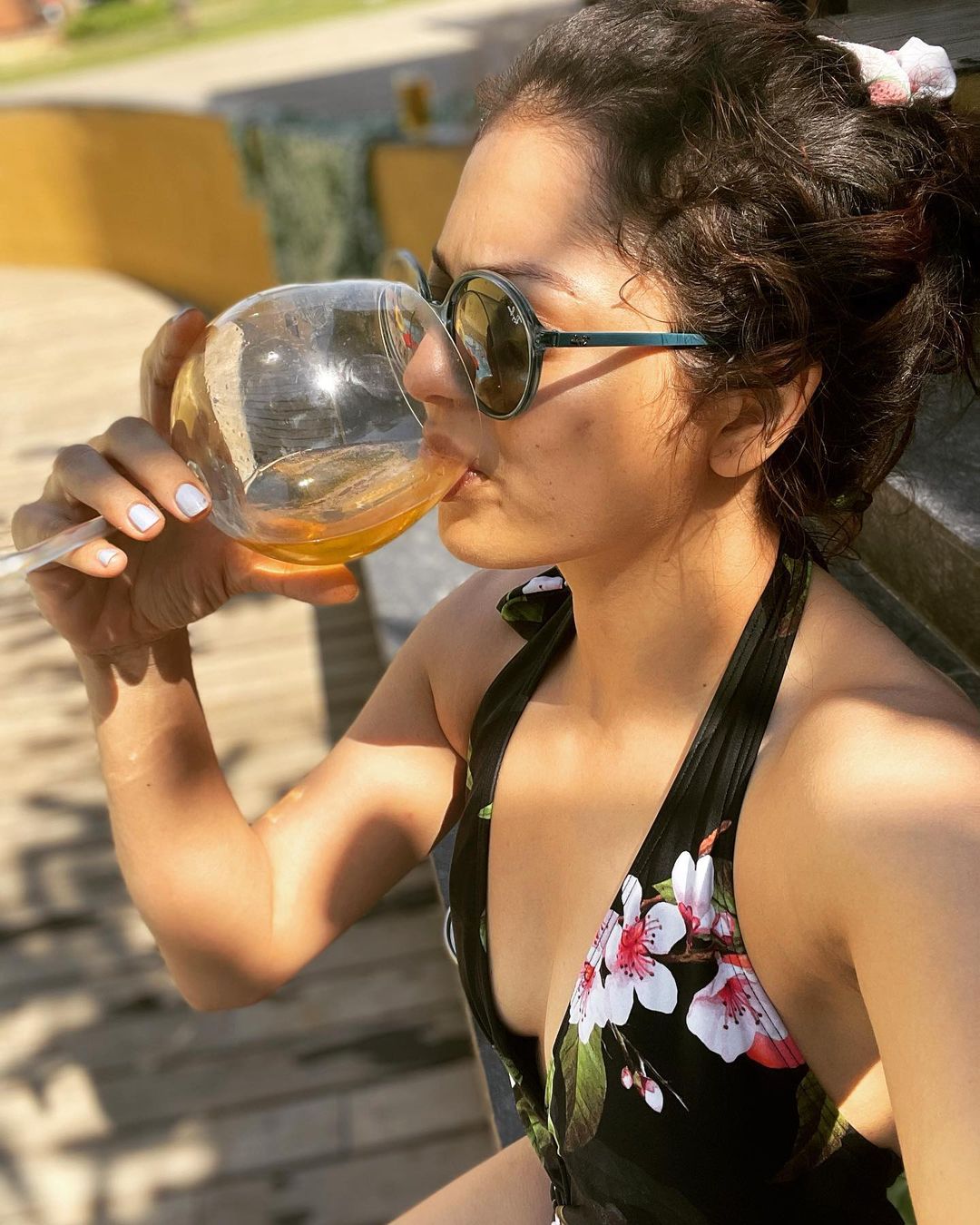 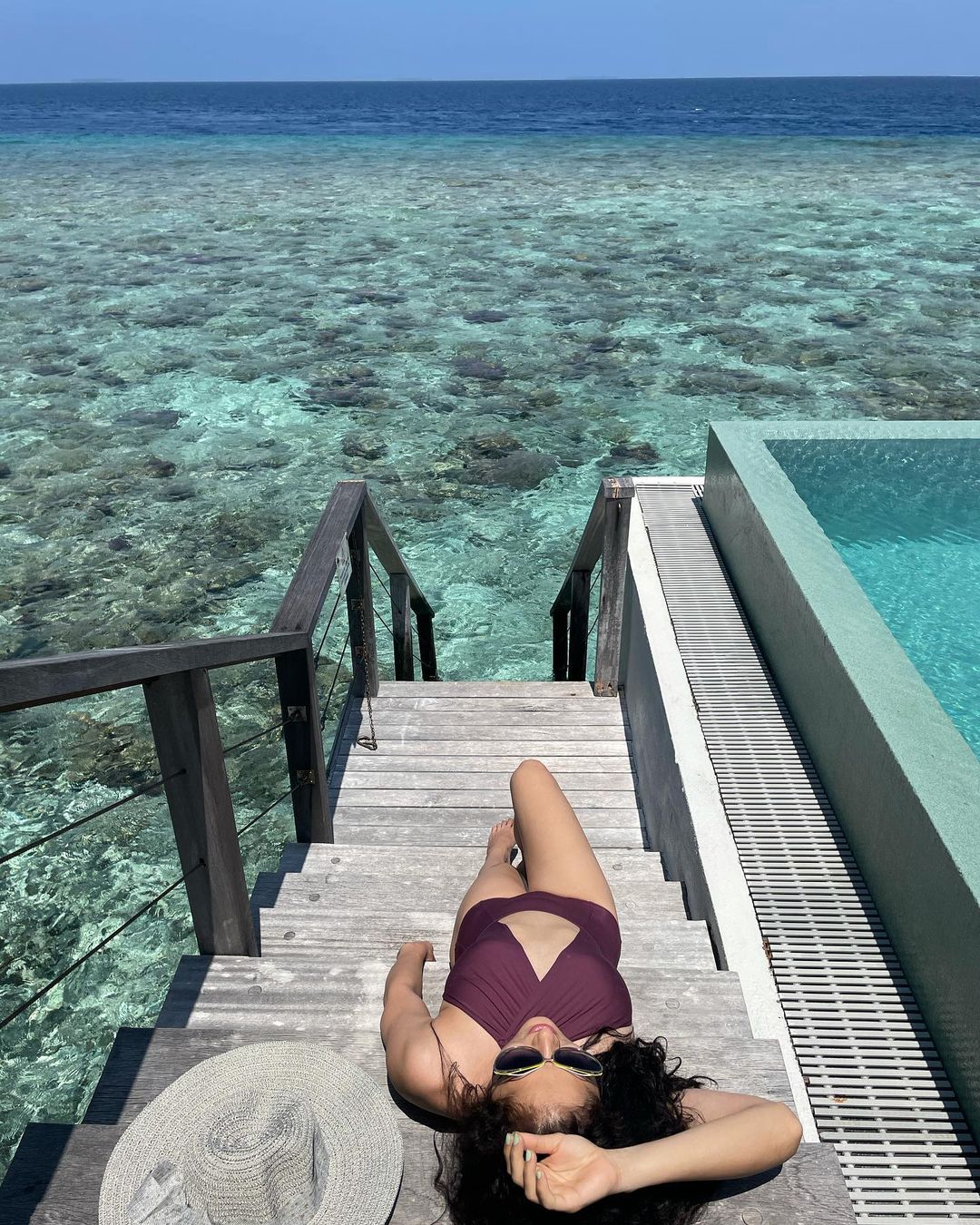 Drashti had treated her fans with another inside the pool picture from the Maldives. In the picture, we could see her wearing a purple-hued swimsuit. Alongside it, she had written, "Keepin it cool in the pool." On February 22, 2021, Drashti had posted an anniversary picture with her hubby, Neeraj, wherein we could see her darling hubby picking her up in his arms. Drashti had captioned the romantic photo as "Happy 6 anniversary my baby. Baby we r 6 today and I love it !!!! Still feels like we got married just yesterday! Thank u for that you and me and I Don't think we need the rest !! I think I can really be stuck on an island with you n still b happy I Knw it’s tooooo soon but I can try that every year n I think my answer would still be the same ! Love u baby soooo much ! Thank you for being you n being mine ..... happy 6 again." (Also Read: Amrit Manthan' Actor, Waseem Mushtaq Becomes A Father Again, Reveals The Name Of His New-Born) 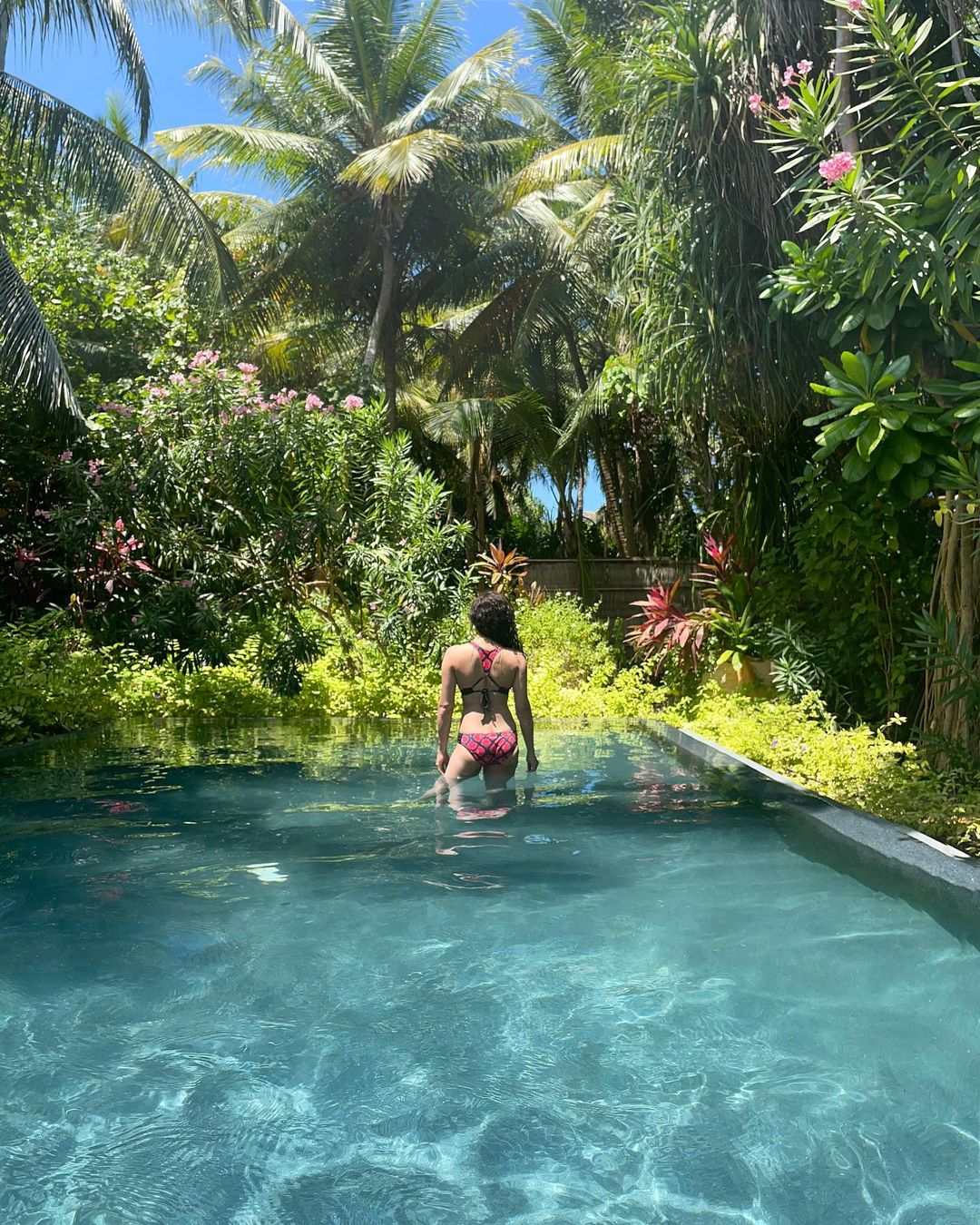 Drashti had also posted a picture with her friends, whom she had met almost after three years. The couple's trip was nothing less than a friends reunion. Drashti had captioned it as "This is us !!!! A reunion after 3 years and again we made so many memories. The Maldives is really heaven on earth." Neeraj had also posted a mushy picture with his wifey, Drashti from their pool breakfast. Alongside it, he had written, "Forever", with a heart emoji. 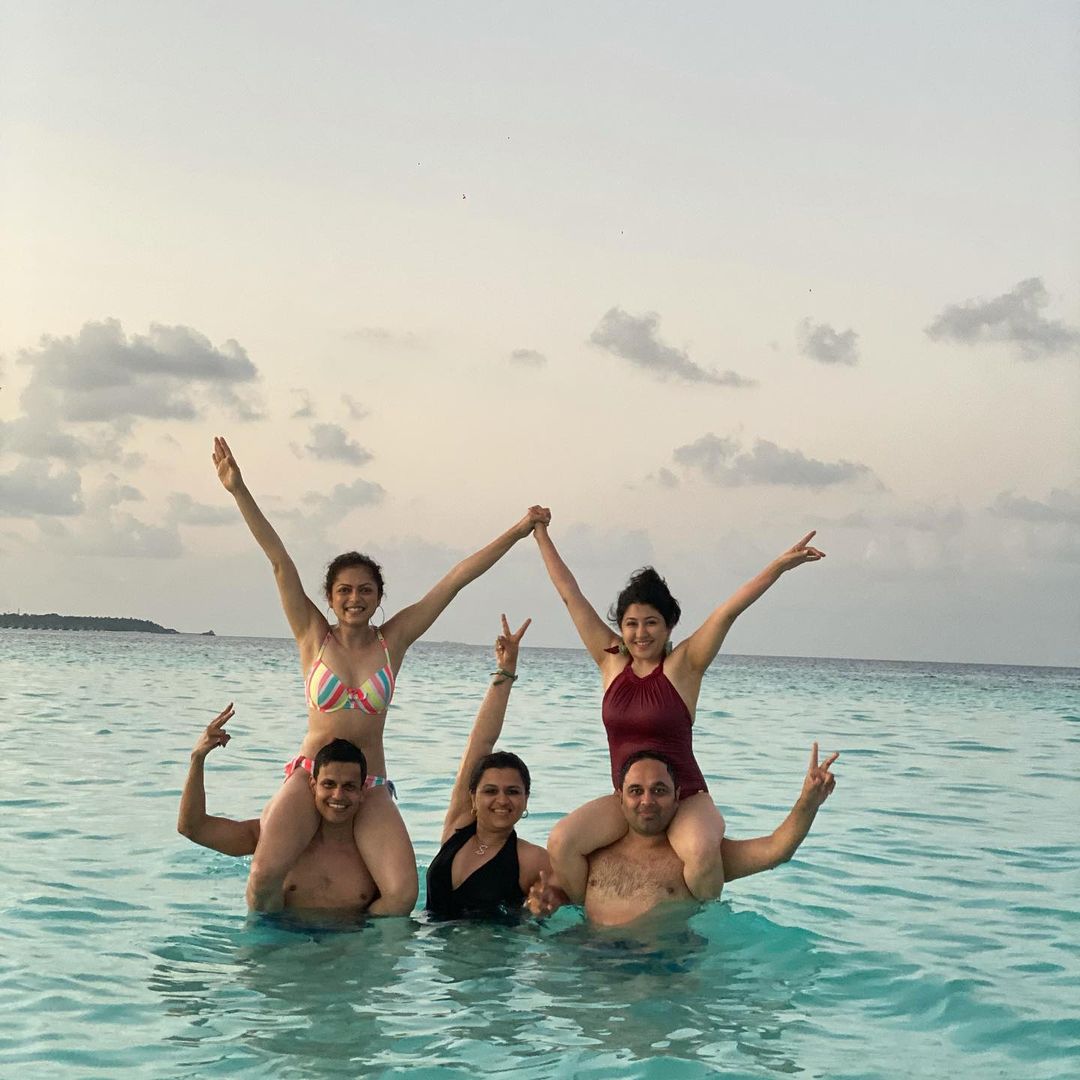 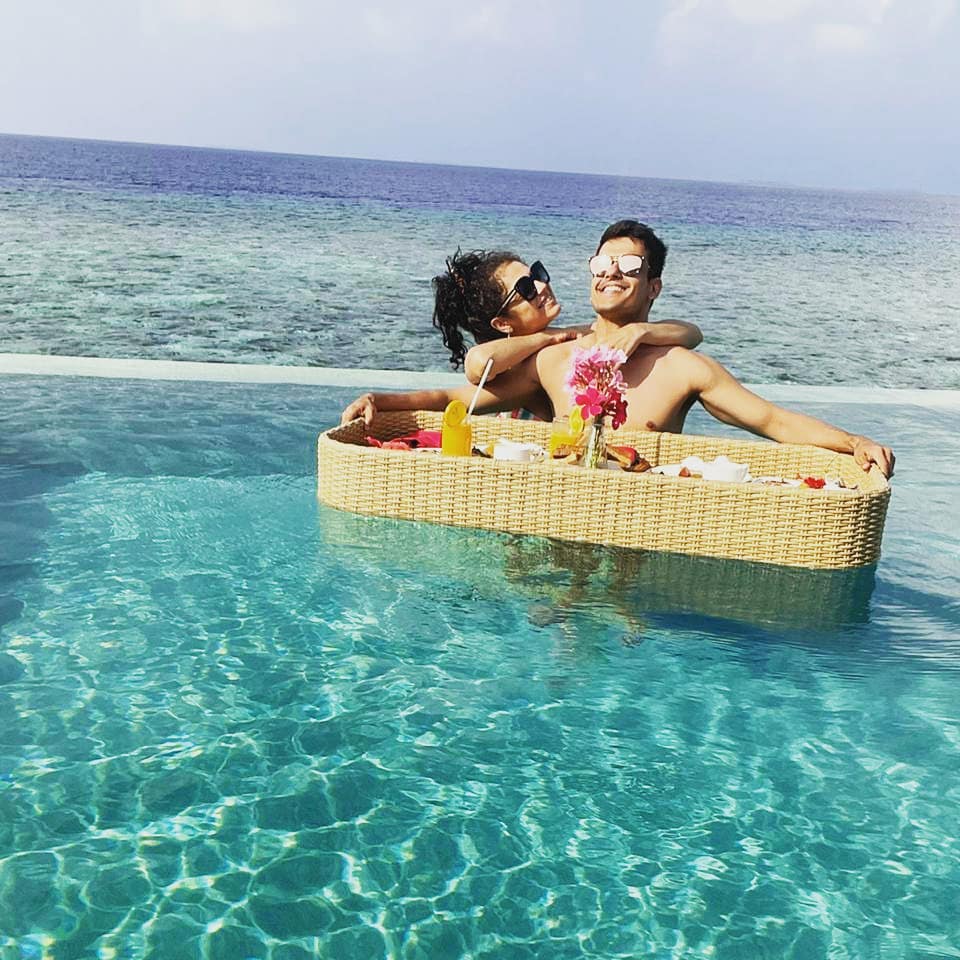 In an interview with TellyChakkar, Drashti had talked about marrying a non-actor and had stated, "I always wanted to marry a non-actor as I have very limited friends in the industry. The very close ones are Sanaya Irani and Nakuul Mehta." She had further talked about him, "Neeraj is a very private person and camera shy. One can never expect us participating together in a reality show." (Don't Miss: Disha Parmar Is Delighted With Her Beau, Rahul Vaidya's Return, Says Her Trophy Is Home)

Well, we love Drashti and Neeraj's pictures from their Maldives vacation! Every summer has a story, and our celebrities like to make the best of this season with lots of vacations! And the latest one to join the list is television actress, Drashti Dhami, who is having the perfect time in Spain with the man of her life, Niraj Khemka. (Recommend