Dipika Chikhlia Topiwala posted a picture perfect family moment of the Topiwalas with her hubby, Hemant Topiwala and daughters, Nidhi Topiwala and Juhi Topiwala in the frame.

As we grow older and move on in our respective lives, we realise the importance of family and the time spent away from them makes us value and cherish the relationship we share with our parents and siblings. Realisation comes with maturity and nostalgia hits us hard when we reminisce the moments spent with our family. Lockdown 2020 has made us value the importance of relationships and family, and we are making the most of this time also by digging out some memories from our archives. (Also Read: Telugu Star Nithiin Reddy Ties The Knot With Fiancee Shalini Kandukuri, Inside Pictures From Wedding)

Post revisiting her dating and wedding phase on social media and sharing the story for the very first time with her fans, Ramayan fame, Dipika Chikhlia Topiwala has been delighting her Insta-fam with some unseen pictures from her family archives. Dipika had tied the knot in 1991 with Hemant Topiwala, owner of Shingar Bindi and Tips and Toes cosmetics. Dipika and Hemant are blessed with two daughters, Nidhi Topiwala and Juhi Topiwala. Before we give a recap of her wedding story with Hemant, let's show you a frame-worthy family picture of the Topiwalas.

Ankit Tiwari Shares Adorable Picture With His Niece, Ruhika, Calls Her 'His Pari' [Photo Inside]

Dipika Chikhlia Topiwala posted a picture perfect family moment of the Topiwalas with her hubby, Hemant Topiwala and daughters, Nidhi Topiwala and Juhi Topiwala in the frame. Dipika captioned the post as "Nothing works as love ...love from family ,friends ...it makes you happy ,keeps you protected you bask in presence of there love and attention, you are looked after emotionally mentally spiritually... living with your family is a very fulfilling experience... cherish your moments khatta meetha tikha... all kinds of experience happen... but enjoy." Dipika and her daughters, Nidhi and Juhi looked graceful in sarees and her husband was all-smiles posing with the beautiful ladies of the house.

In a series of IG posts, Dipika Chikhlia Topiwala had shared snippets of her love story with Hemant Topiwala, including how they had met, when they had decided to be each other’s forever and their honeymoon diaries. Initially, Dipika had posted a picture from her varmala ceremony on Instagram and had revealed that she’ll be sharing the story of how she met her husband on the social media platform. Dipika had captioned the picture as "Just wondering do you ever want to know how I met my husband #husband #wife #marraige #live #faith #trust #love #life #bind #actor #actress #beautiful-life #happiness #god #blessings." (Also Read: Rana Daggubati Announces His Wedding Date With Miheeka Bajaj, Says, 'He Is Excited for The Big Day') 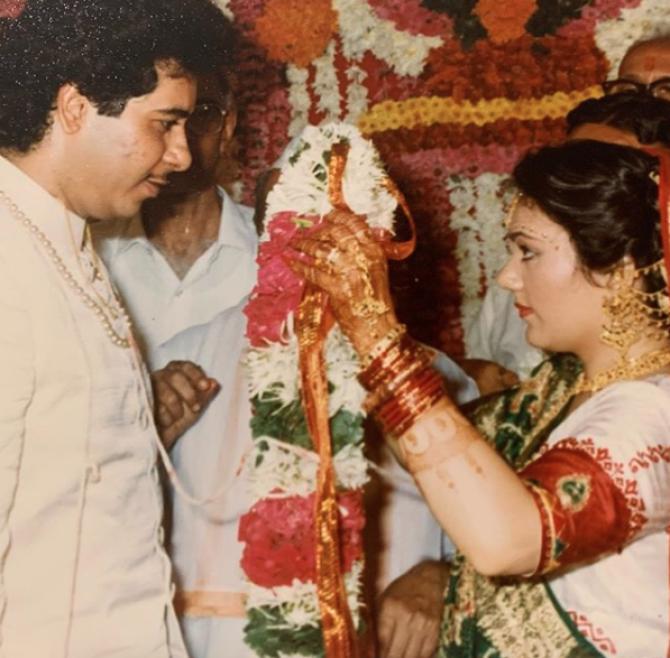 Dipika Chikhlia and Hemant Topiwala had first met on the sets of her very first movie, Sun Meri Laila. Elaborating on the details, Dipika had shared, "All of you know how sita met ram I thought to let you in on a secret as to how I met my Real life Ram . ..my husband's family has been manufacturing and selling traditional Indian cosmetics under the name of Shingar since 1961....my very first movie that I did was Sun Meri Laila and in the film there was a scene where I model for an ad film and that ad film was for Shingar Kajal....when we were shooting for the ad scene, Hemant came on the set to watch the shoot....that's when we first met... After that we both got busy with our lives but we both were on each other's mind till we finally met again...to be contd... #marraige #bond #actor #movie #1st #faith #trustbeive." In her continuation post, Dipika Chikhlia Topiwala had revealed how her Gujarati businessman husband, Hemant Topiwala had fulfilled his wife’s wish of going to Switzerland on their honeymoon. Sharing a picture from their honeymoon, Dipika had written, “I, continue... this is a picture from my holiday after the wedding (honeymoon), we had taken a trip to Switzerland... He had asked me were for you want to travel after the wedding, I did not take even a minute to tell him... it’s Switzerland .. I always thought and felt it’s land of dreams coming true ...I knew I wanted snow ...so after 2 days of wedding and reception which was on the following day, we flew to Delhi. I had to attend parliament for a day and from there we flew to Switzerland..did a lot of cities ..Zurich, Zermatt, St Morris Geneva Interlaken ... cannot remember which city we took this pic from mostly, I think it’s St Moritz. It’s a known for ski Ing ..people come from all over the world for that sport out there, flew back, stopped over for a couple of days in London and then back home to start a new life ... life continues ...I continue ....time flies ...while we making memories time stops for no one #love#life#marraige #lovehappens #time#honeymoon #honeymoondestination #Family #Home #Children #instagram.” (Also Read: Mira Rajput Kapoor's Advice With Her Unseen Just-Before-The-Wedding Moment Is For Every Bride-To-Be) 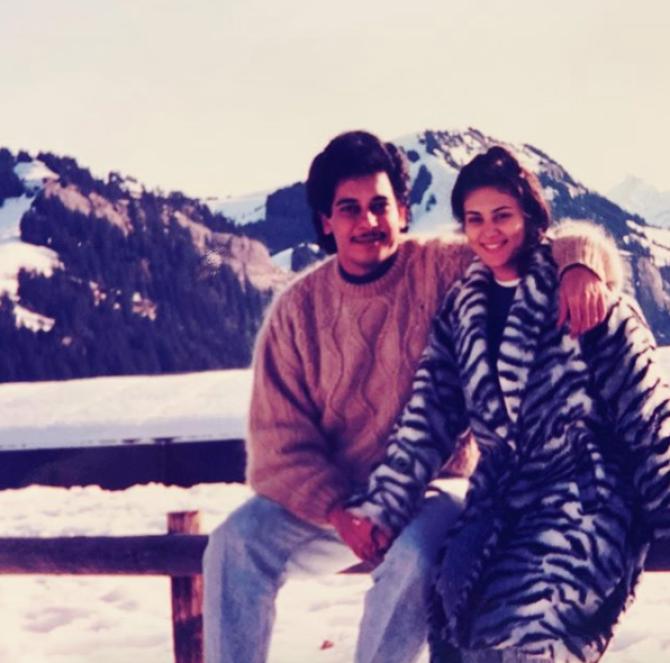 What's the most special memory you have with your family? Let us know!