The proud mother, Chhavi Mittal has shared a picture from her little one, Arham Hussein's first birthday. Chhavi penned a beautiful poem in Hindi for her daughter, who is growing up to be so loving!

When a couple plans to complete their family by embracing parenthood again, the major concern remains how will their firstborn react to the second baby. While the little one is still learning and exploring his existence in the world, he/she is promoted to being an elder sibling. But when the baby comes, it is interesting to see the little one bond with his/her newborn sibling and parents adore every day of the journey of their munchkins together. When Chhavi Mittal and Mohit Hussein's seven-and-a-half-year-old baby girl, Areeza Hussein was understanding what it is being ‘me’, she got promoted to the role of ‘big sister’. (Also Read: Geeta Phogat Twins With Hubby, Pawan And Son, Arjun Saroha As They Celebrate Her Brother's Birthday)

And if we go by Chhavi Mittal and Mohit Hussein's social media posts, we can see how wonderfully their little one has handled the role of a big sister. From planning a baby shower for her mother when she was pregnant, decorating home for her baby brother’s welcome after he was born to the love with which she adores her baby brother in every picture, Areeza Hussein is enjoying every bit of being a ‘big sister’ to Arham Hussein. 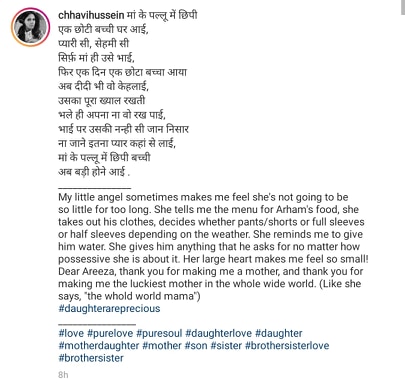 Appreciating her little one, Areeza Hussein for ‘making her the luckiest mother in the whole wide world’, Chhavi Mittal has continued, “My little angel sometimes makes me feel she's not going to be so little for too long. She tells me the menu for Arham's food, she takes out his clothes, decides whether pants/shorts or full sleeves or half sleeves depending on the weather. She reminds me to give him water. She gives him anything that he asks for no matter how possessive she is about it. Her large heart makes me feel so small! Dear Areeza, thank you for making me a mother, and thank you for making me the luckiest mother in the whole wide world. (Like she says, "the whold world mama") #daughterareprecious #love #purelove #puresoul #daughterlove #daughter #motherdaughter #mother #son #sister #brothersisterlove #brothersister." (Also Read: Asin's Daughter, Arin Is The Cutest 'Wizard' Of B-Town, No Wonder Her Superpower Is To Make Us Smile)

Ever since her pregnancy, Chhavi Mittal has been sharing her experiences on motherhood on her social media handle, her YouTube channel, Being Woman With Chhavi and Shitty Ideas Trending. Emphasizing on the kids’ nutrition, Chhavi had written in a post, "When it comes to little ones, every little thing matters. And the most important is nutrition. Naturally then mothers are the most concerned about what to feed the kids, and more so when solids need to be started. There is no right way of parenting, but there are a few things that may be wrong where food for babies is concerned. I'm no expert, but for all those mothers who asked, I'm sharing a video about how I started solids for little @areezahussein and little @arhamhussein."

Due to the lockdown, everyone is staying at home and have figured out different alternatives to complete their daily routine. While the fitness freaks have resorted to home workout sessions, Chhavi Mittal too, has been doing her exercises at home but with her in-house trainer. Captioning her workout video, Chhavi had written, "FUNNEST WORKOUT EVER! This only made me realise that we can't do everything. My baby @areezahussein tried to train me and it was a disaster but I'm so proud of my little monkey! #workoutmadefun #workout #funworkout #funwithkids #funwithdaughter #motherdaughter #daughtersarethebest #daughter #chhavimittal #BeingWomanWithChhavi #whatsyoursecretwithchhavi."

On Arham Hussein’s first birthday, Chhavi Mittal had posted twinning pictures with her handsome boy and expressing how her life has changed in this one year, she had written, "This day last year, I turned from mom version 1.0 straight to mom version 10x pro. When you came into my life I didn't know that you had the unique ability to sweep me off my feet and make me run hither thither like a crazy chic both at the same time! Thanks to you, I have no other option but to be my own best version at all times. And out of all the words that you say, "ba-ba" is my favourite because that's what you call me! I love you to the moon and back you little tall man, but you already know that right @arhamhussein? Happiest first birthday my dearest! I promise to take you to the beach sometime soon... #happybirthday #birthday #firstbirthday #happiestfirstbirthday #arham #birthdaywishes #chhavimittal #birthdayduringlockdown." (Also Read: Sania Mirza's Baby Boy, Izhaan Mirza Malik Teaches His 'Khaala', Anam Mirza 'How To Take Baby Steps')

Just seven-and-a-half-year-old, Areeza is surely an inspiration! Much love to not-so-little-anymore, Areeza and baby Arham!