After their arrest and bail by the Narcotics Control Bureau, Haarsh Limbachiyaa posted a couple of pictures with his wife, Bharti Singh. But the couple got trolled by netizens for consuming drugs.

Since we have entered into the last month of 2020 and hoping for new beginnings in 2021, what is not likely to go away anytime soon is trolling. Social media is infamous for trolls and backlashes that celebrities face from netizens, hiding behind their computer and phone screens. The keyboard ninjas target the celebrities with their hate bombs. But some celebrities decide to give them a taste of their own medicine by giving a befitting reply to the trolls. Comedienne Bharti Singh and her anchor/writer-husband, Haarsh Limbachiyaa become the targets of trolls ahead of their wedding anniversary but the latter made sure to hit back savagely! (Also Read: Rubina Dilaik's Shocking Details About Her Marriage With Abhinav, Says They Would Have been Divorced)

For the unversed, in late November, Bharti Singh and Haarsh Limbachiyaa’s residence was raided by Narcotics Control Bureau and the couple was taken into custody after being questioned for 15 hours. After a "small quantity of cannabis" (86.5 grams) was found from their home in an apartment complex in Andheri and the couple’s confession on consuming drugs, Bharti and Haarsh were arrested by the anti-drugs bureau. Later, Bharti and Haarsh were granted bail on a bond of Rs 15,000 each. 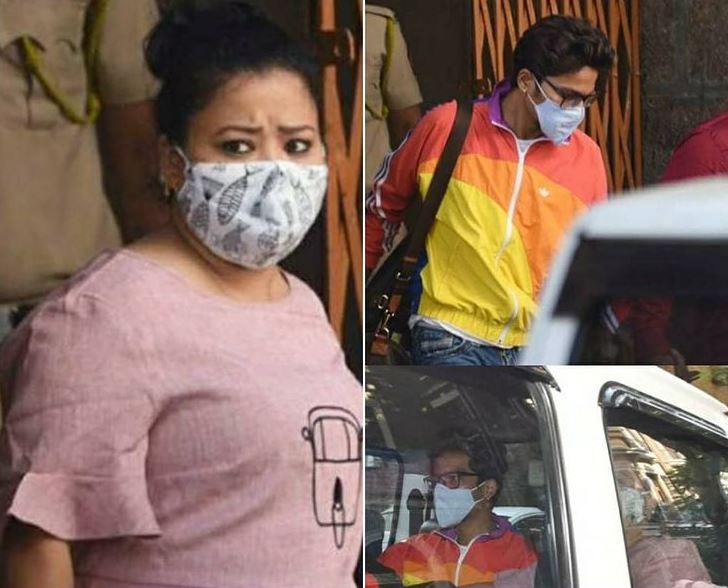 After their arrest and bail by the Narcotics Control Bureau, Haarsh Limbachiyaa posted a couple of pictures with his wife, Bharti Singh. Ahead of their third wedding anniversary, Bharti and Haarsh’s pictures were a delight for their fans as the former was lost in her husband’s eyes as they had romantically posed on the sets. Haarsh captioned the post as “When we are together nothing else matters.” While it was a treat for some of their fans, some netizens didn’t leave this chance to troll the couple for their involvement in drug nexus and consumption of cannabis. Haarsh decided to address these trolls and hit back to them individually with savage replies. 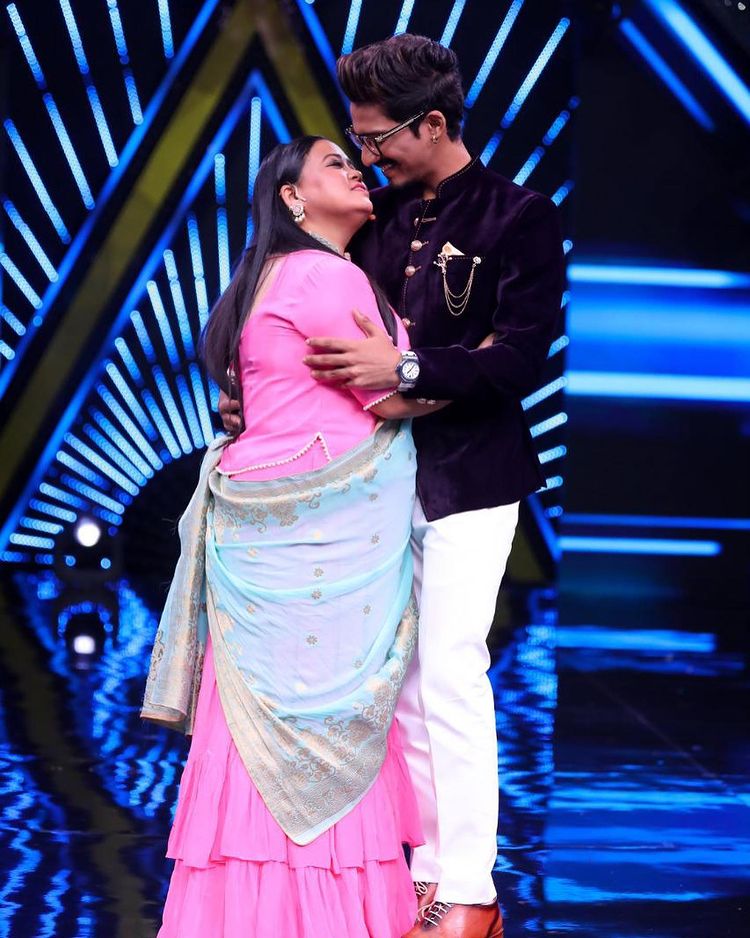 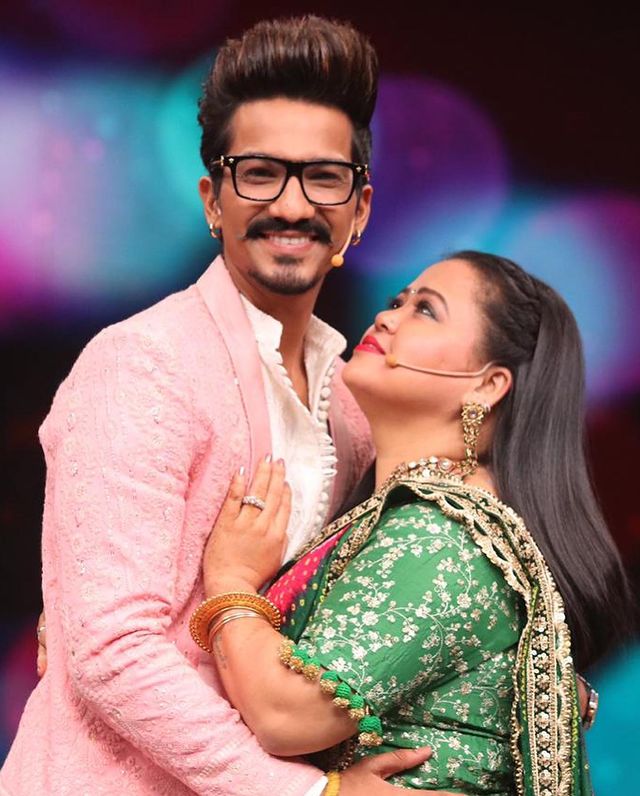 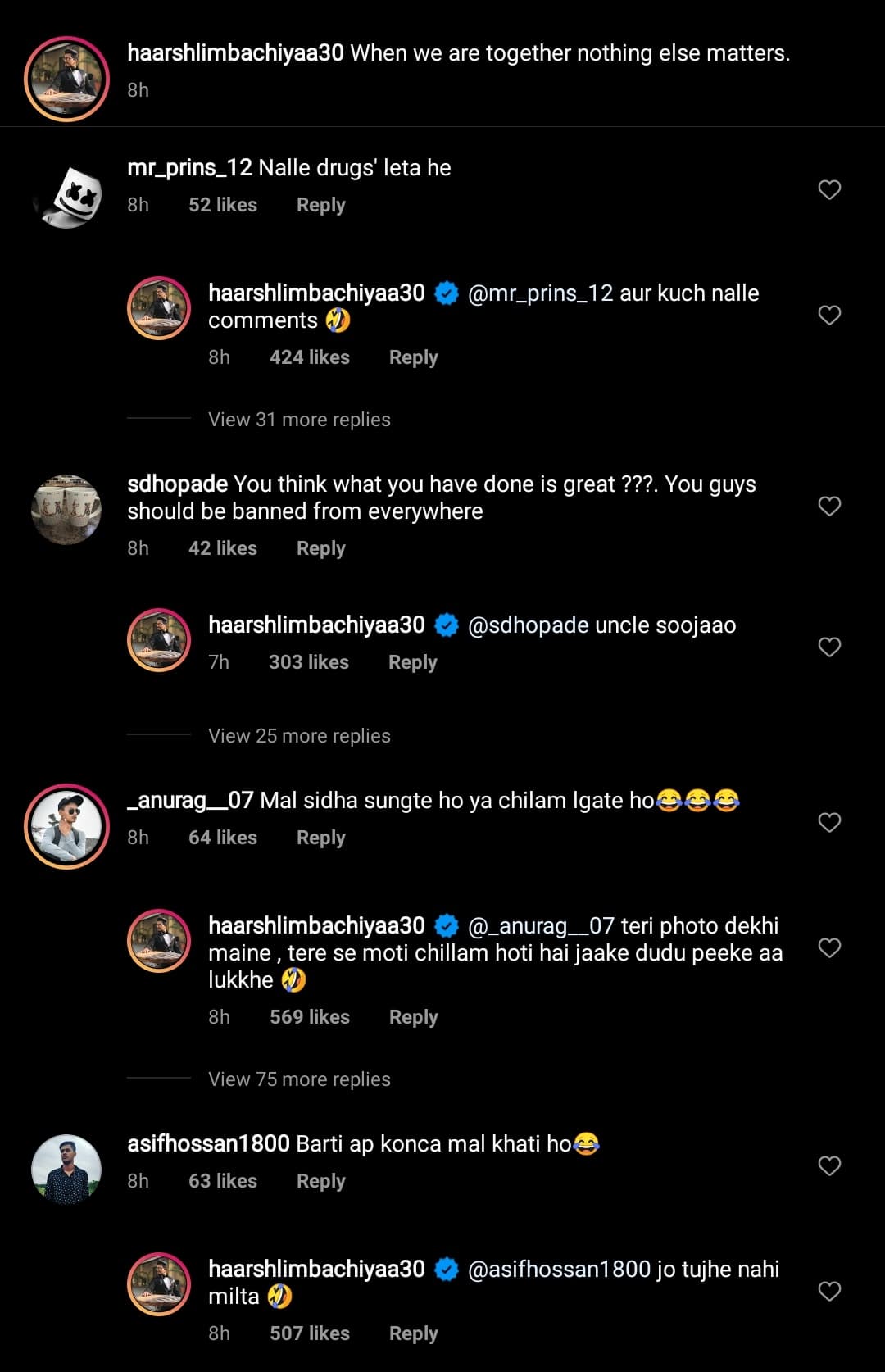 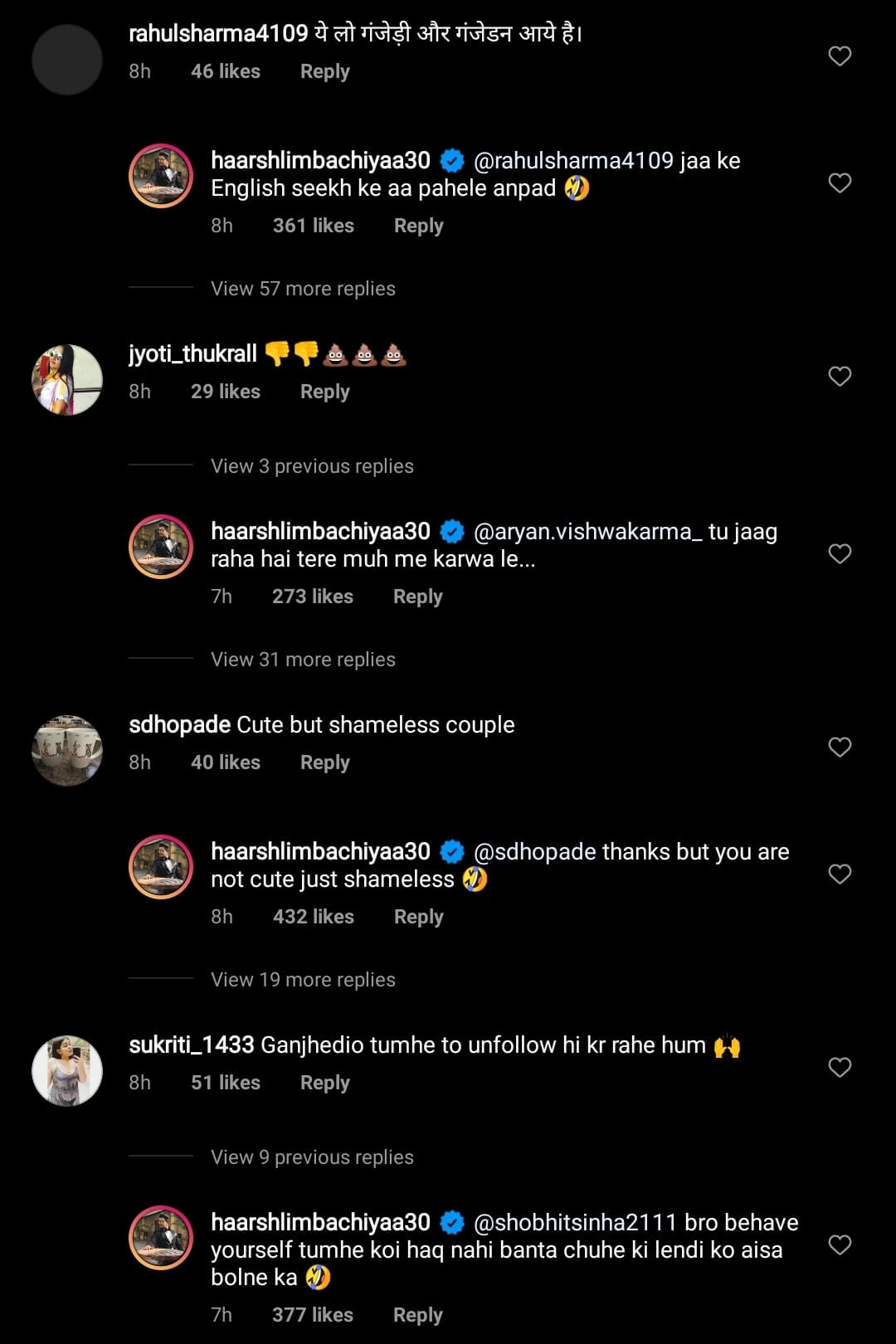 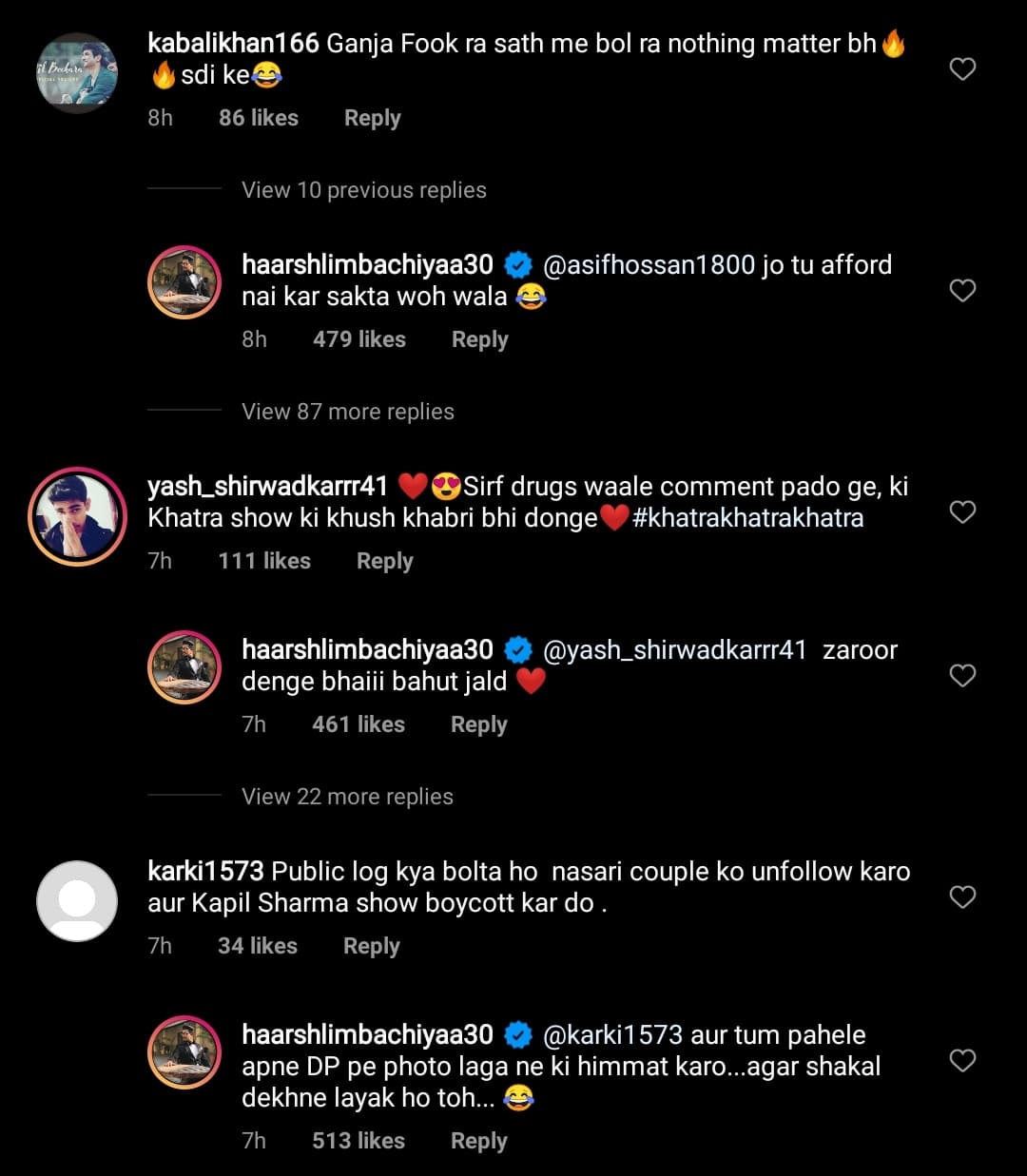 Ahead of Bharti Singh and Haarsh Limbachiyaa’s third wedding anniversary, let’s take a recap on their love story. Being a plus-sized woman, Bharti had never thought of falling in love because of her being overweight. So, when Haarsh had knocked the doors of her heart, Bharti had taken her time and gradually welcomed love with open arms. In her interviews, Bharti had always shared that it was Haarsh, who taught her how to love and saying ‘I Love You’ to him, changed her for better. And now, it has been almost three years since Bharti and Haarsh have been living their happily ever after with love, romance and a pinch of comedy. (Also Read: 'Coolie No 1' Actress, Sara Ali Khan Reveals Director David Dhawan Was Angry At His Son Varun Dhawan) 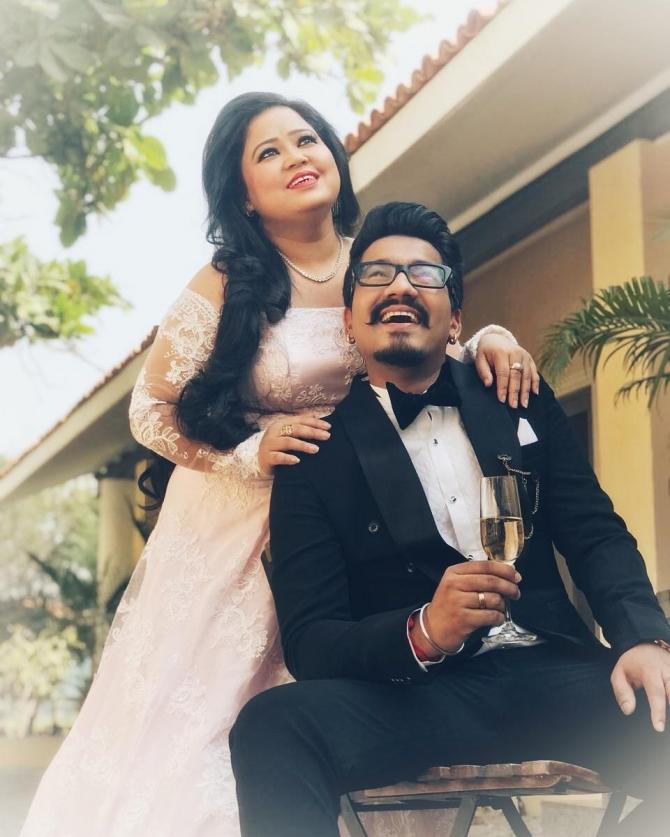 Bharti Singh and Haarsh Limbachiyaa had plans to start a family in 2020 but due to the risk that the world is living in, they had postponed it. In an interview with TellyChakkar, Bharti had said, "Well, I want to become a mother. In fact, Haarsh and I had planned to go family way in 2020. Socha toh tha ki 2020 mai 20-20 khel lu. However, due to the coronavirus outbreak, I don’t wish to take any chance. I can’t plan a baby in such tension. I want my baby to come in a healthy environment. Right now, it is risky to even visit a hospital and once you get pregnant, you have to visit a doctor for regular check-ups. Might as well wait for another year than putting a small baby’s life at risk.” In 2018, Haarsh Limbachiyaa had bought a luxury car but was trolled by the netizens for spending his wife, Bharti Singh’s money. It was on Rajeev Khandelwal’s show, JuzzBaat when Bharti had expressed how upset she was on the Haarsh being criticised by the netizens. Clarifying that Haarsh had bought the car from his ‘hard earned money’, Bharti had said on the show, "Initially, people didn't believe that Haarsh bought a car for himself and I didn't gift it to him. He bought it from his hard-earned money. He works tirelessly, day in and night out and keeps me really happy. I am so proud of my husband." (Also Read: Kunal Kemmu In Love With A Beauty Other Than His Wife, Shahid Kapoor Calls Them, Rab Ne Bana Di Jodi) 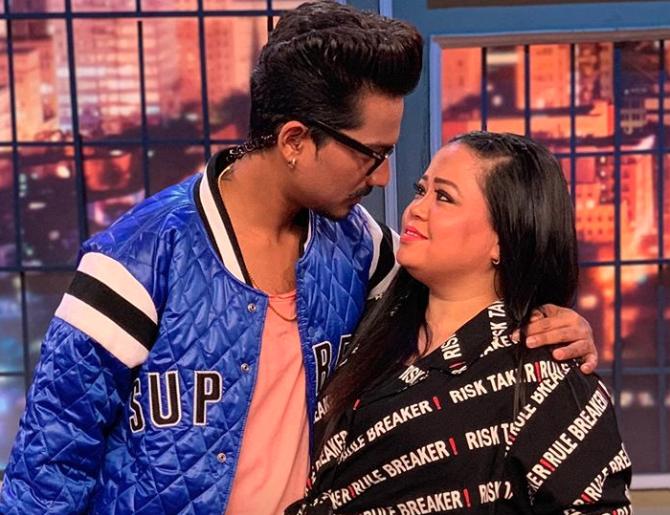 On the professional front, Bharti and Haarsh were hosting India's Best Dancer before their arrest and the former was also a part of The Kapil Sharma Show.