The wedding festivities of Babita Phogat have begun and she is beaming in her wedding glow. Today, Babita had her 'mehendi' ceremony and looked surreal in an Indo-western attire.

The last quarter of the year is always the most-awaited one as all our favorite festivals and wedding season begins. Wedding bells are ringing everywhere and we can’t stop ourselves from munching the shaadi ka ladoo and admiring how beautiful everyone looks at the wedding. Wedding is the union of two souls and they pledge to be each other for eternity. When a couple receives the node from their parents, they eagerly wait for their D-day and start to prepare everything. The mere thought of spending your life with your partner gives them jitters and goosebumps and they can’t wait for their wedding. (Recommended Read: 'Hate Story 4' Fame, Karan Wahi Has Found Love Again, Dating A London Based Girl, Uditi Singh?)

Mahari Choriya Ladko Se Kum Hai Ke? The famous dialogue from the movie, Dangal based on the story of Mahavir Singh Phogat and his struggles of making his daughter's world-class wrestlers gave inspiration to many. The story of Geeta-Babita made real-life, Geeta Phogat and Babita Phogat a worldwide name. The Phogat sisters have made us proud at various tournaments and we beam with glory when we look at them. The younger Phogat sister, Babita recently made her debut on the silver screen with the dance reality show, Nach Baliye 9 with her fiancé, Vivek Suhag and it was only then that we came to know about their love story. 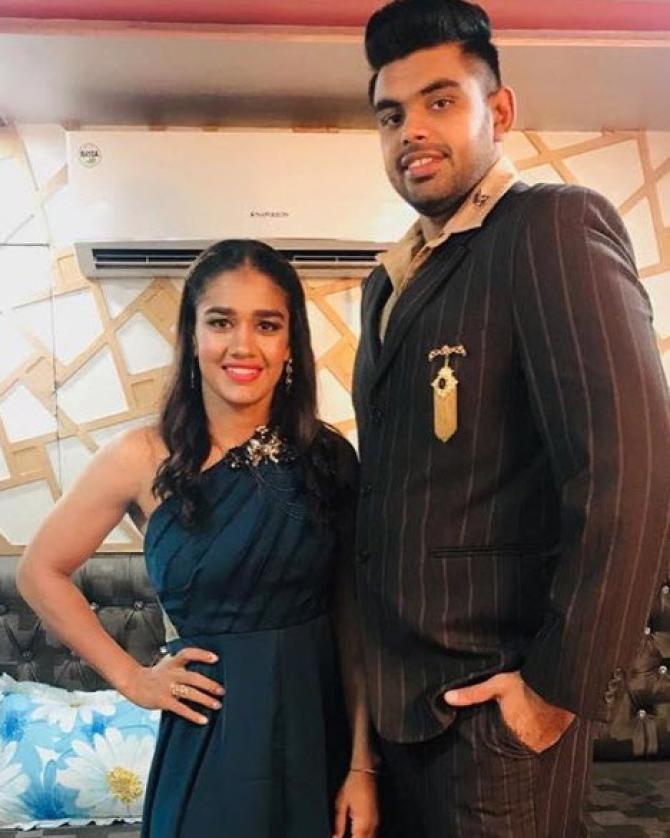 The latest update in Babita Phogat and Vivek Suhag’s love story is that the duo is going to be Mr and Mrs on December 1, 2019. And the pre-wedding functions have already begun in the Phogat household. Today, November 30, 2019, it was Babita’s mehendi ceremony and her wide grin smile was enough to tell that she is all excited and set to enter the new phase in her life. Babita took to her Instagram handle and shared pictures from her mehendi ceremony. Dressed in an Indo-western attire, Babita looked stunning and beaming with joy. In the pictures, we could see Babita’s sisters accompanying her and cherishing the movement. Here are the pictures:

Babita Phogat and Vivek Suhag’s pre-wedding rituals had begun with the ‘Baan’ ceremony and the entire Phogat household had gathered to shower blessing on Babita. Babita shared a sneak-peek into the shaadi ki pehli rasam, wherein she had looked super happy and stunning. The picture had Babita sitting down, where her cousin and his wife, are carrying out the baan ritual. For those who are wondering what this ritual is, baan embarks the beginning of the first ritual in a wedding, wherein the ladies or elders of the house apply haldi ubtan on the bride-to-be, a day before or a few days before the wedding to ensure that her skin glows on her D-day. Sharing the picture, Babita wrote, “Shaadi ki pehli rasam.” And in one video, shared by Babita, the family members and relatives could be seen having a fun moment with the soon-to-be bride. (Suggested Read: Veteran Actress, Asha Parekh Ji Shares Her Experience Of Never Getting Married And Not Regretting It) 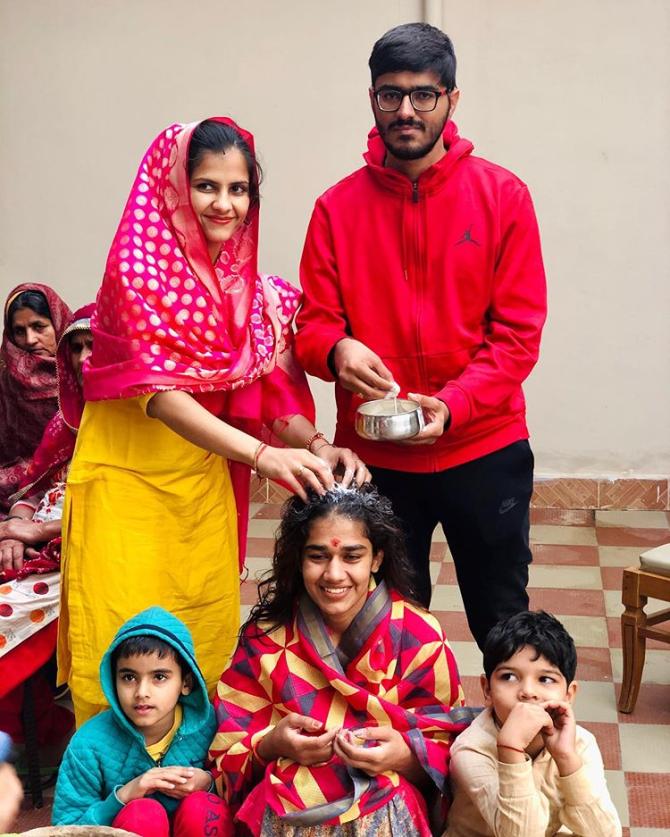 It was on June 04, 2019, when Babita Phogat had officially announced her relationship with Vivek Suhag, along with her father, Mahavir Phogat and the elders of the house. In the picture, Vivek was seen getting tumults of blessings from his soon-to-be father-in-law and other elders of the house. Babita had then penned, “@SuhagVivek you know it's official when you get the blessing from my bapu. It's time for Dilwale to take her Dulhaniya #love #blessing #family #sweetheart #myman #cupid #engaged #lifeline #myhero #TuesdayThoughts.” 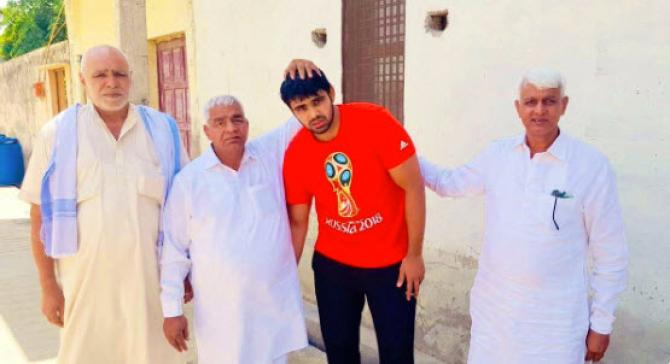 A TOI June 2019 report had also contained details about their wedding. As per the same, Vivek Suhag and Babita Phogat’s ‘big day’ will most likely be getting married at the Phogats’ ancestral village in Balali, Haryana. In the same interaction with the TOI, Babita had shared that she will move to Delhi after the wedding. Babita was then quoted as saying, “Like Geeta didi, I will also move to Delhi after marriage because that is where Vivek’s family is, and I will continue to train. The big events like the Olympics are close now and my focus will not shift.” (Do Read: Saif Ali Khan Gave A Hilarious Reply To Wife Kareena's Question On The Show 'What Women Want')

We can’t wait to see Babita Phogat and Vivek Suhag in their wedding ensembles!