BharatPe co-founder, Ashneer Grover gave an inside tour of his luxurious home in Delhi in a recent interview. Also, he talked about his infamous dining table, Porsche Cayman, and much more. Find out!

The co-founder of BharatPe, Ashneer Grover is one of the most-admired entrepreneurs in the country at the moment. It was his appearance in India’s first-ever business reality show, Shark Tank India, that bought him immense fame across the nation. However, there’s no denying the fact that, in the beginning, people found it hard to deal with the way Ashneer used to give his feedback to the entrepreneurs that used to pitch their ideas on the show.

However, as the show passed, people understood his character a bit more and fell in love with his assessment of contestants' ideas and pitches. In the second season of Shark Tank India, Ashneer Grover was replaced by CarDekho's founder, Amit Jain, but it couldn’t save the show from sinking. 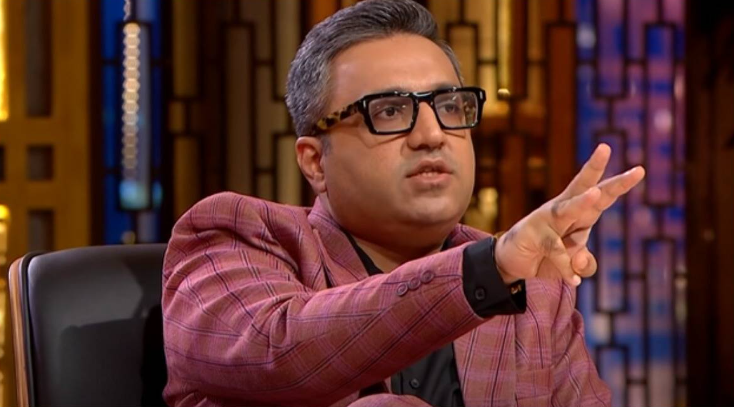 Despite making all the moves, as per the reports, Shark Tank India 2 failed to recreate the magic of its first season. While the show's viewership witnessed a huge drop, netizens trolled the show's makers for turning it into a daily soap. Ashneer Grover’s absence was also a major factor, why Shark Tank India 2 couldn’t replicate the success of its first season. On the flip side, Ashneer Grover was unaffected by the makers' decision to drop him for the second season as he was extremely busy promoting his book, Doglapan: The Hard Truth about Life and Start-Ups. Ashneer Grover gives a quick tour of his luxurious bungalow, reportedly worth Rs. 30 crores, in Delhi

Recently, in a conversation with Brut India, Ashneer Grover gave a tour of his bungalow in Delhi. From showing different rooms to sharing glimpses of his dining table and many more things, the businessman showed almost every corner of his dream house. If the reports are to be believed, Ashneer’s bungalow is reportedly worth Rs. 30 crores. However, the exact figure is still under wraps. So without further ado, let’s just step inside Ashneer’s splendid bungalow! 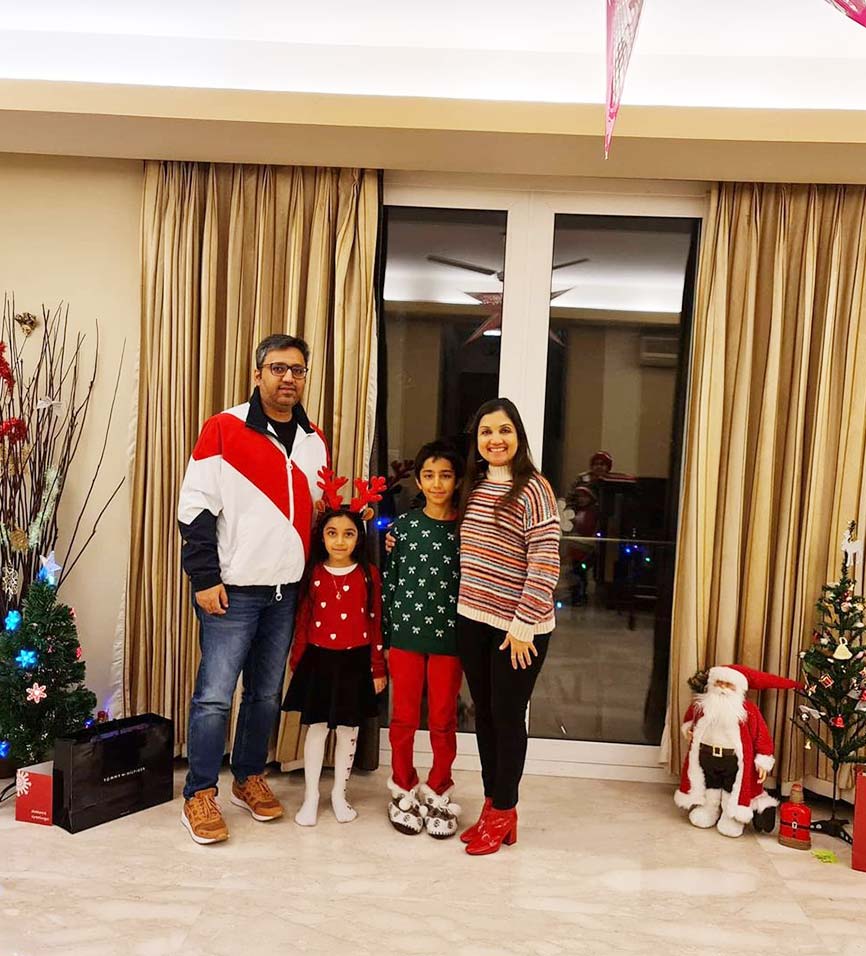 During his conversation with Brut India, Ashneer Grover was accompanied by his wife, Madhuri Jain Grover, throughout the tour of their home. When the couple was asked who designed their home, it was Ashneer, who revealed that they had just purchased the place from a builder and the rest of the work was done by them. 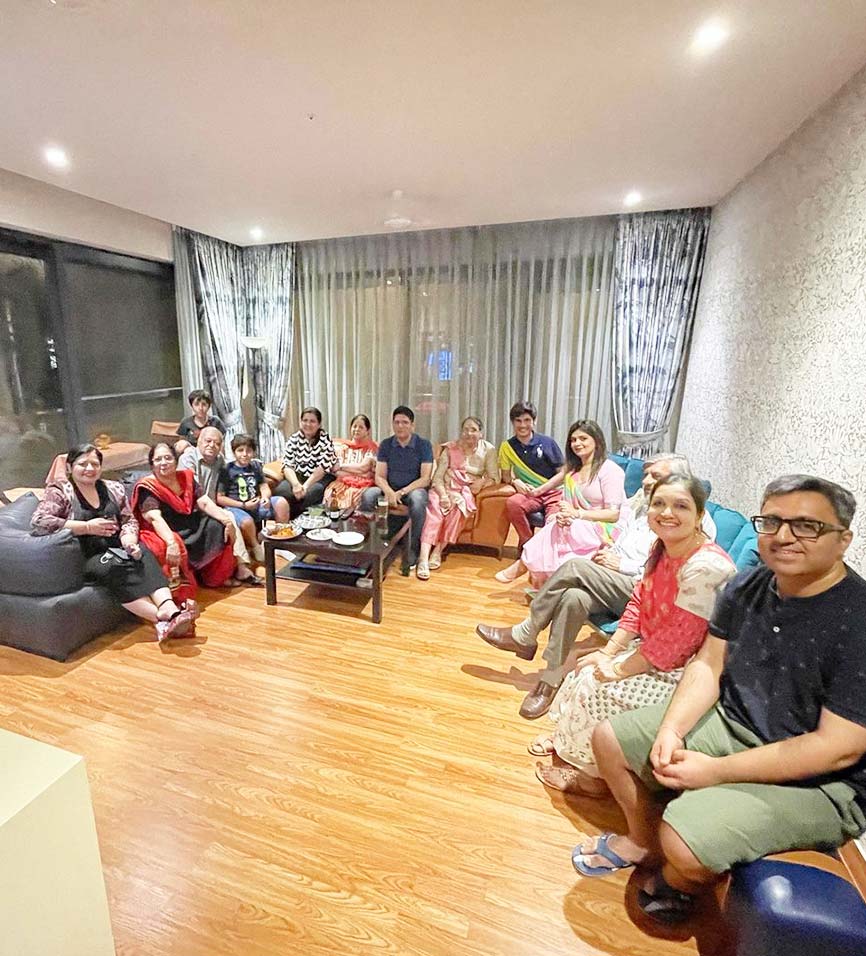 The renowned businessman, Ashneer Grover added that the entire designing of the house, along with all the interiors, furnishings, artworks and paintings, was done by him and his wife, Madhuri Jain Grover. Further in the conversation, the doting wife shared that before purchasing it, she and her husband, Ashneer Grover had seen a lot of houses in Delhi of this size. However, in the end, they were blessed enough to get their hands on this property, which they really liked both in terms of the layout and space. In the same interview, Madhuri Jain Grover and Ashneer Grover admitted that their living room is their favourite place in their house because of the aesthetics. The reason behind it was the installation of surreal paintings and artworks by the couple in that particular area, which makes it quite artistic. However, there’s a story behind the paintings, and it was Ashneer, who revealed it all to the viewers. 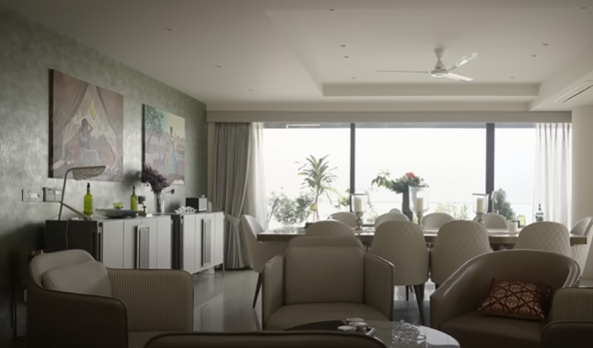 The founder of BharatPe revealed that all the paintings are a work of art from a renowned US-based illustrator, who was from South India. The entrepreneur shared that he really liked the style and art of his computer-generated images, which was why he had given him a contract to create some pieces for him. After this, he gave the images to his sister-in-law, who does commission art, and she was the one, who got them hand-painted. However, Ashneer clearly stated that he had given due credit to the South Indian guy, who got him the images in the first place. 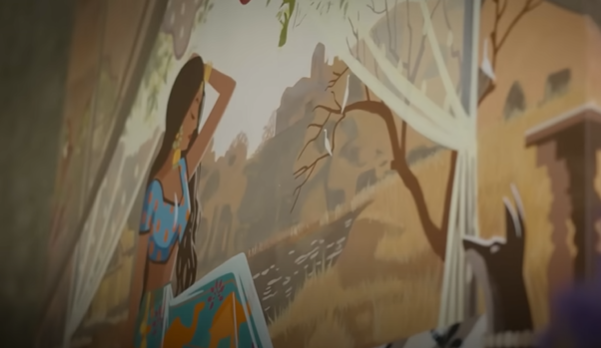 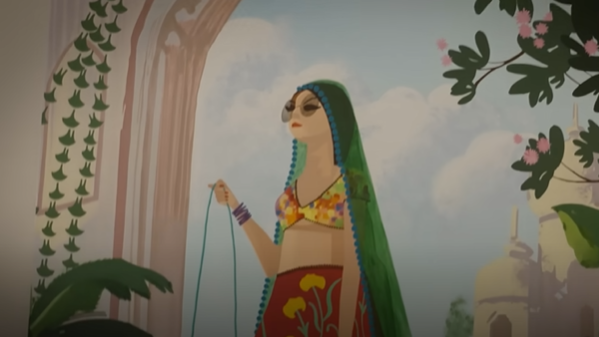 Ashneer Grover also added that the pictures have the theme of Indian cities like Jaipur and Jodhpur in the background. However, one can see some spunk in the paintings, which makes them quite unique. Well, we can clearly see what Ashneer was talking about, as most of the artefacts and paintings in his house are a mix of both tradition and spunk, which is quite surreal. 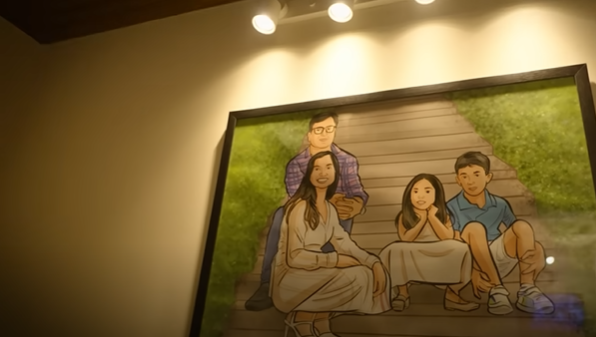 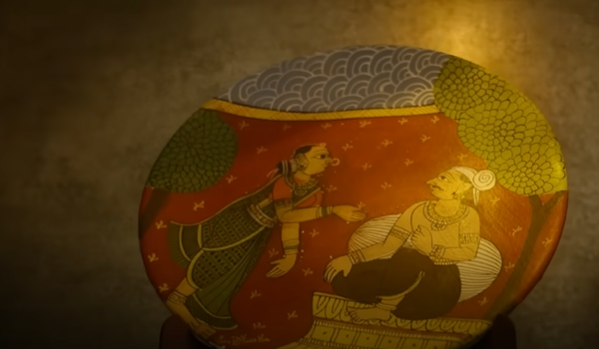 Moving further in the interview, Ashneer Grover and Madhuri Jain Grover flaunted their in-house bar, which looks absolutely regal. However, the couple admitted that they’re teetotallers and the bar is for their guests and family members. Sharing his views on the same, Ashneer admitted that both he and Madhuri are in their 40s, which was why they don’t drink at all. However, he shared that his father drinks and he likes to entertain people. Thus, their bar always remains fully loaded with 100-150 bottles. The next thing in Ashneer Grover’s home tour is the infamous dining table, whose prize broke the headlines on the internet. For the unversed, when Ashneer and Madhuri Jain Grover had a fight with BharatPe’s board of directors, reports were rife that the couple had misused the company’s funds. It was when people started speculating that Ashneer and Madhuri’s dining table was worth Rs. 10 crores, and people started believing in the rumours, courtesy of the former’s enormous net worth. 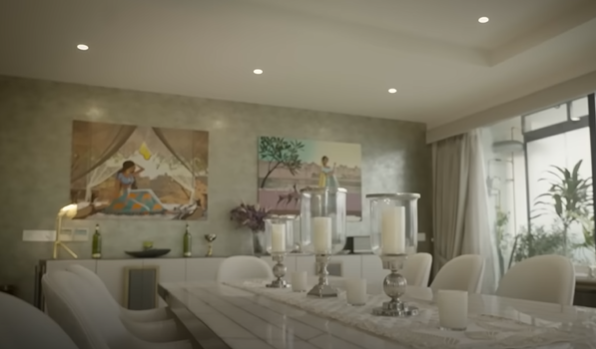 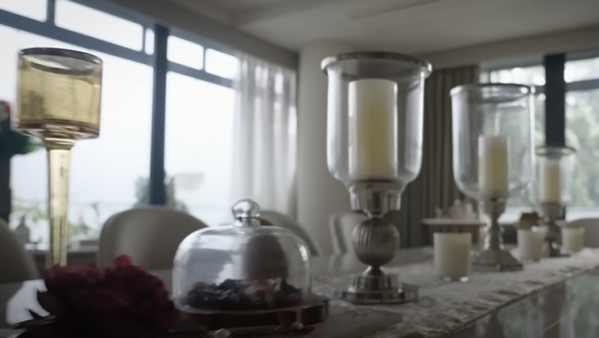 Further in the home tour, Ashneer Grover showed the guest room where his guests stay, and it was quite mesmerising. While the room's tone was quite similar to the theme of the bungalow, which is a subtle white finish, what caught our attention was the comfy and big bed that looked just perfect. In addition, the long french windows add a bit more charm to the room's aesthetics, which makes it every guest's dream room ever.

Don't Miss: Dev Anand's Home Which Was The First Bungalow Owned By An Actor In Juhu, Still Exhibits His Charm 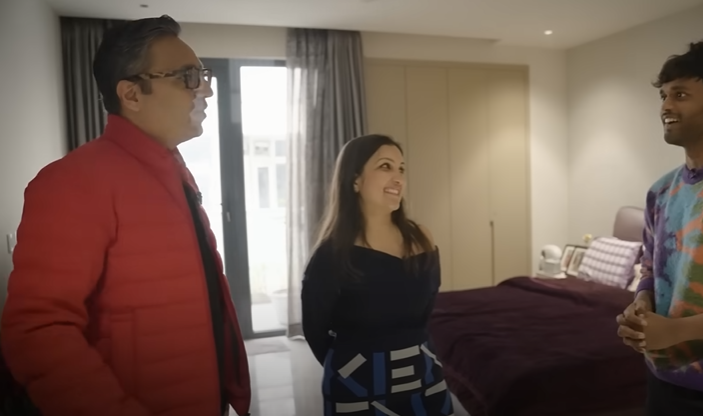 After a long wait, Ashneer Grover and Madhuri Jain Grover finally showed their bedroom to the viewers, and we have to admit that it was quite cosy. While the structure of the room was not entirely visible, a comfy bed along with two sofas twinning with the colour of the headboard looked quite impressive. The accent wall's pattern also perfectly complemented the bedroom's pastel theme. Also, we shouldn’t forget that Ashneer and Madhuri had designed it all by themselves, making it even more beautiful. 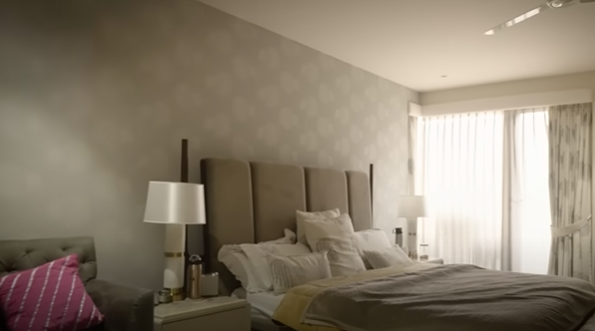 There’s no doubt that everything inside Ashneer Grover’s house is a work of art. However, there’s one thing that stands outside his bungalow, which is also nothing less than a piece of art and is too expensive. We are talking about Porsche Cayman, which is probably the only green-hued Porsche in Delhi. 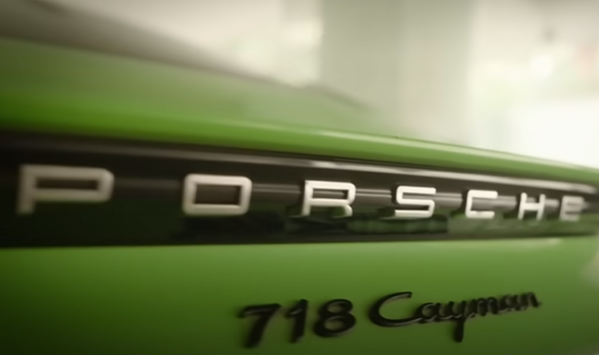 When the entrepreneur was asked about his decision to paint his Porsche in green, Ashneer shared that it is not his favourite colour, but the reason why he went for it was because it was a buzzing colour. No doubt the colour is indeed a head-turner and received a big thumbs up from the netizens on the internet. For the unversed, Ashneer’s Porsche Cayman reportedly comes with a whopping price tag of Rs. 1.22 crores. 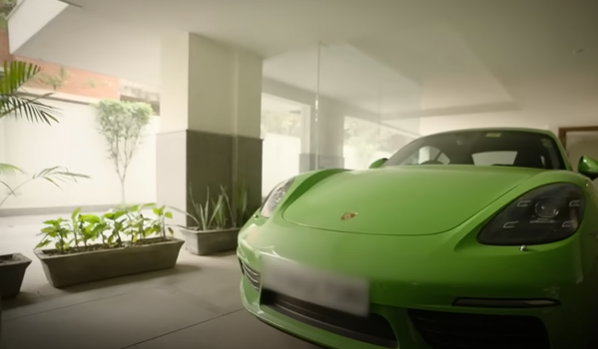 Click here to watch Ashneer Grover flaunting his Porsche Cayman along with the complete tour of his house!

According to a report in Forbes India, the founder of BharatPe, Ashneer Grover’s net worth is around the mammoth sum of Rs. 21,300 crores. Well, the huge number looks quite justified when you take a closer look at the startups which he had turned into successful companies with his experience and skills. Well, we are in love with Ashneer Grover and Madhuri Jain Grover's luxurious bungalow in Delhi. What about you? Let us know!