Giving a perfect start to the week, Anushka Sharma posted a picture on her IG handle. Donned in a beige ribbed knit dress, Anushka posed on a deep blue coloured couch. 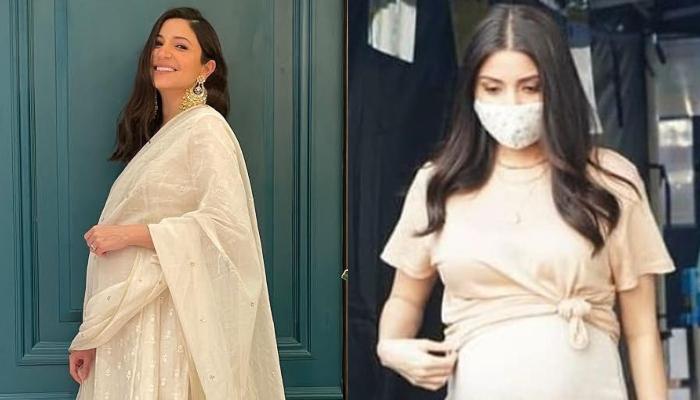 Given the hectic work schedules of celebrities, it is hard to believe that they get to live a normal life and find happiness in little things. But Rab Ne Bana Di Jodi debutante, Anushka Sharma had time and again proved that she’s as much of a happy-go-lucky girl like all of us! Be it gazing at the sunset from her terrace, sharing her family moments on social media, making perfect use of the sunlight spots in her house, showering love on her hubby or her love for the animals, Anushka’s IG feed often resonates with ours! Things are no different now too as Anushka often delights her fans with glimpses of her pregnancy journey, leaving us in awe! (Also Read: Ziva Singh Dhoni And Ahil Sharma Watching Penguins Will Remind You Of The Good Old Childhood Days)

In August, the Bollywood buffs were overjoyed as Saif Ali Khan and Kareena Kapoor Khan had confirmed their second pregnancy and a few days after that, Virat Kohli and Anushka Sharma had announced that they are expecting their first child in January 2021. ‘And then, we were three! Arriving Jan 2021.’ – said a tweet by Anushka and Virat which had taken the social media by storm. For the Indian Premier League 2020, Anushka had jetted off to Dubai with Virat and had returned to Mumbai post the league got over. The mommy-to-be is spending her last trimester in Mumbai with her parents and is also completing her professional commitments.

Since Anushka Sharma had resumed her work post lockdown and is back on the sets to complete her pending and new assignments, the mommy-to-be has been sharing glimpses of her shoots. Giving a perfect start to the week, Anushka posted a picture on her IG handle and simple captioned it as “Hey.” Donned in a beige ribbed knit dress, Anushka posed on a deep blue coloured couch and her look was accentuated with makeup and wavy textured hair. Anushka’s baby bump is also adorably visible as she posed with a straight face for the camera.

While Virat Kohli is busy with his upcoming Australia series, Anushka Sharma is enjoying the last phase of her pregnancy with her parents. A few days ago, Anushka had posted a glimpse of her happy time with parents and it was her doting father, who had clicked his daughter’s candid moment. Dressed in a lavender suit, Anushka sat cosily in her balcony as her father clicked her with his silhouette visible in the reflection behind her. Anushka had captioned the post as “When your dad captures your perfect chai time candid photo and tells you to cut him out of frame but you won’t because - daughter!” (Also Read: Aishwarya Rai Bachchan Revealed How She Had Reacted When Addressed As 'Mrs Bachchan' For First Time)

On September 13, 2020, Anushka Sharma had treated her fans with a beautiful picture from the beach, caressing and adoring her baby bump. Anushka had captioned her post as “Nothing is more real & humbling than experiencing creation of life in you. When this is not in your control then really what is?” Anushka’s post was flooded with lovely comments and the best one had come from her hubby, Virat, who had written, “My whole world in one frame.” Virat had later posted a gorgeous shot with Anushka, posing in the magical setting of sunset. Anushka and Virat’s picture had surely taken away the charm of sunsets and the limelight was all on the soon-to-be parents! (Also Read: Virat Kohli And Anushka Sharma's Combined Net Worth, Own A 34 Crore Worth Sea-Facing Home In Mumbai)

Every picture of Anushka is a delight for her fans and we eagerly wait for her to post on social media!