The television industry's diva, Ankita Lokhande had finally tied the knot with her then-boyfriend, now-husband, Vicky Jain, on December 14, 2021. She had gala pre-wedding ceremonies, and while we were still stuck to her gorgeous wedding affair, Ankita took to her IG handle to share some unseen pictures from the same.

On the night of her grand wedding ceremony, Ankita had shared a series of jaw-dropping pictures from her wedding ceremony. The gorgeousness had donned a beautiful golden lehenga with uncut polki jewellery from the shelves of Manish Malhotra. Her look was accentuated with her magnificent golden dupatta. On the other hand, Vicky had opted for a cream-coloured sherwani. Sharing the pictures, Ankita had written:

Ankita has changed her name from Ankita Lokhande to Ankita Lokhande Jain as she added her husband, Vicky's surname, to social media handles. The picture of the same surfaces all over the internet.

The Pavitra Rishta actress took to her IG handle to share a few unseen pictures from her wedding and pre-wedding ceremonies, starting from the puja time on her mehendi day to her haldi ceremony to her enchanting wedding day. In one of the series, she compiled pictures from her mehendi ceremony where she looked absolutely gorgeous in a yellow and rani pink-coloured Nauvari saree with golden temple jewellery and kamarbandhan.

In another series, she posed with her family members and in-laws and wrote a caption to it, which can be read as:

Recommended Read: Rakul Preet Pens A Beautiful Note For Her Boyfriend, Jackky Bhagnani, On His Birthday

While in another series, Ankita Lokhande Jain shared a few unseen, fun-filled pictures with her husband, Vicky Jain from their haldi ceremony and put a beautiful caption to it. The actress wrote:

"In this world, love has no colour. Yet how deeply my body is stained by yours."

A few moments ago, the actress posted a series of her solo pictures from her wedding day and added a fun caption to it, which can be read as:

We are still hungover from these gorgeous photos of this beautiful bride. What about you? 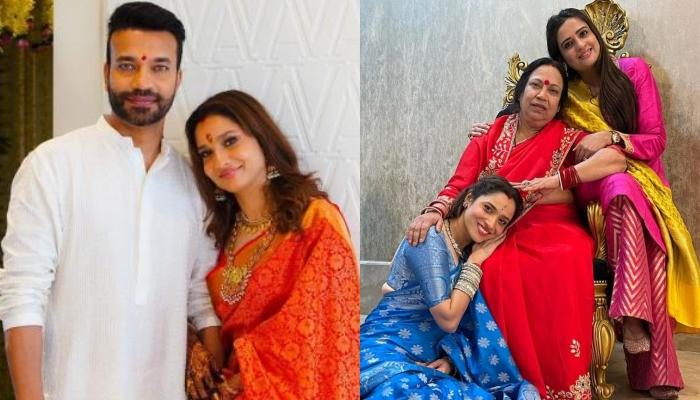 Popular actress, Ankita Lokhande and her husband, Vicky Jain had tied the knot on December 14, 2021, in a gala wedding ceremony. Since then, the much-in-love duo has been setting some pure couple goals with their fun banters, cute camaraderie and mushy romance. The duo had also won the title of Star