As Sania Mirza and Anam Mirza are in Dubai with their spouses, Anam shared a complete family picture on her IG handle. Check out the picture inside! The pandemic had distanced Sania Mirza and her son, Izhaan Mirza Malik from Shoaib Malik and we have been constantly informing you about their reunion in Dubai. Sania Mirza along with son, Izhaan Mirza Malik, sister, Anam Mirza and brother-in-law, Mohammad Asaduddin had headed to Dubai a few days back as they were supposed to reunite with Shoaib Malik there. Since then, there have been various videos and photos shared on their respective accounts about their time in Dubai. Now, Anam has shared a complete family picture on her IG handle. (Also Read: Shoaib Ibrahim Makes Wife, Dipika Kakar Do Squats And Abs Workout, Becomes Her Fitness Guru [Video])

Do you know Shoaib Malik was missing from her saali, Anam Mirza’s wedding? Yes, he had skipped his saali’s wedding and people couldn’t help but notice his absence and wonder what made him do so. A few days back, after constant pestering, Anam had opened up on her jiju’s absence from her wedding and had shut the trolls. Before we take you to her response, let’s take a look at the first-ever complete family picture of Anam, Asad, Sania, Shoaib and Izhaan posted on social media handle.

As Shoaib was missing from Anam’s wedding, we had seen plenty of pictures of the sisters from the wedding, but the picture was incomplete without Shoaib. And then the world was hit by the pandemic and everyone was locked inside their homes. Now, as the lockdown has been lifted, the Mirza sisters have headed to Dubai with their spouses and baby, Izhaan and finally we got to witness their complete family picture. Anam took to her IG stories and shared a picture, where Sania can be seen leaning over hubby, Shoaib’s shoulder, holding baby, Izhaan in her arms, and Anam can be seen leaning towards her main man, Asad as the complete family had posed for the camera. Take a look: 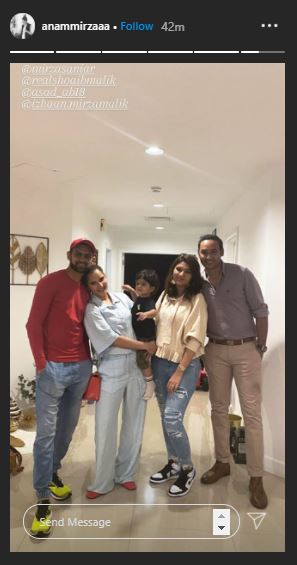 Coming back to Anam’s reply to everyone pestering her about her jiju, Shoaib’s absence from her wedding, after a lot of backlash and questions, Anam had come forward to defend her jiju. Taking to her IG stories, Anam had revealed the reason why her jiju, Shoaib Malik could not make it to her wedding. She had written, “We all missed @realshoaibmalik at the wedding. He couldn’t make it due to multiple reasons. Stop sending me hate that he was not there for the wedding.. if he could he would’ve been here. Relax” followed by angry emoticons. Take a look: 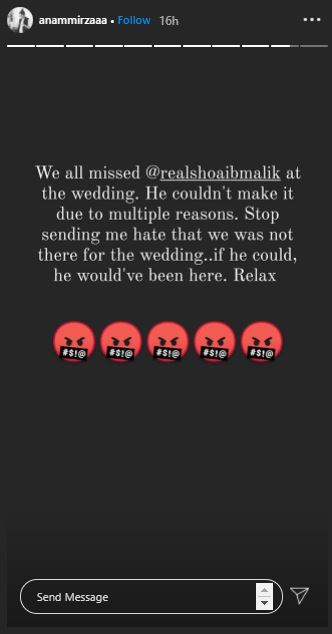 As we have been documenting about Sania Mirza and family’s Dubai trip, on September 11, 2020, ace Indian tennis star, Sania had taken to her Instagram stories and had shared two beautiful pictures. In the first picture, we could see Sania with her husband and cricketer, Shoaib Malik and their little prince, Izhaan. The second picture featured the mother-son duo looking away from the camera. Atop of the second photo, Sania had written, "At sea. At peace @izhaan.mirzamalik." (Recommended Read: Karanvir And Teejay's Daughters, Bella-Vienna Start Preparing To be Elder Sisters, Pictures Inside) 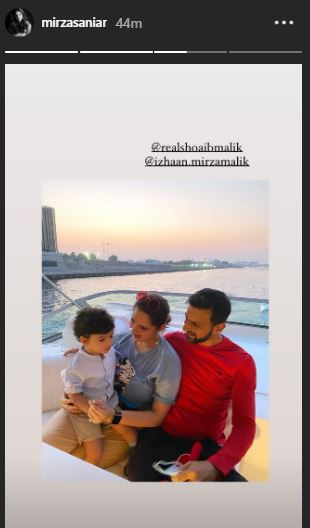 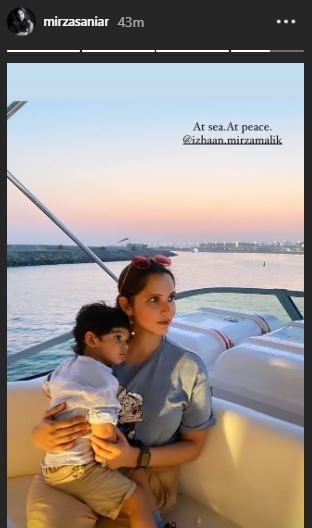 As the pandemic had separated the Mirza-Malik family, a few days back, the family was ready to reunite. Taking to her IG stories, Sania had shared a cutesy video of her son, Izhaan Mirza Malik, where mommy, Sania could be seen asking Izhaan, “Where have we come?” To which, Izhaan had replied, “Dubai”. When asked, “Who are we gonna meet tomorrow?”, Izhaan, who was excitedly roaming in the room had said, “Baba” when probed by his mother. And later, on September 9, 2020, over Izhaan’s official IG handle, Sania had posted a picture of Izhaan holding the hands of his parents with the scenic background of Dubai. It looked like the family was enjoying the view of Dubai and the time with each other. (Recommended Read: Rajeev Sen Raises Question On His Relationship With Wife, Charu Asopa Post Reuniting After Months) We loved the family picture shared by Anam Mirza. What about you? Wedding in India is not just an occasion but an emotion. A week long celebrations and months’ long preparations lead to some awesome memories. From stressing over the venue to obsessing over ‘Kareena Kapoor wala lehenga’, wedding is an amalgamation of every emotion. However, despite all the efforts done by