For the fam-jam with Neetu Kapoor, Riddhima Kapoor Sahni and Ranbir Kapoor, Alia Bhatt repeated her peach off-shoulder dress which she had worn at her mom, Soni Razdan's birthday bash.

Be it Sonam Kapoor Ahuja, Kareena Kapoor Khan, Sara Ali Khan, Gauri Khan, Janhvi Kapoor, Malaika Arora, Parineeti Chopra, Genelia Deshmukh, Samantha Akkineni or the royals, Kate Middleton and Meghan Markle, celebrities have always vouched for sustainable fashion. Alia Bhatt too, belongs to the list as she has often proved her love for repeated outfits and we love how every time, she carries off her look with grace!

On October 25, 2020, Alia Bhatt had celebrated her mom, Soni Razdan's birthday with Mahesh Bhatt, Shaheen Bhatt, Ranbir Kapoor, Neetu Kapoor, Riddhima Kapoor Sahni and Samara Sahni. Alia had opted for a peach-coloured off-shoulder dress for Soni's birthday bash. Sharing a picture with Soni from the celebrations, Alia had written, "They say - when you're looking at your mother you're looking at the purest love you'll ever know. Happy Birthday Maa .. I love you so so much" followed by a heart emoji. A while back, Neetu Kapoor posted a picture, featuring her 'world' in a frame. Neetu posed with Riddhima Kapoor Sahni, Alia Bhatt, Ranbir Kapoor and Samara Sahni for a happy picture, which she captioned as "My World". Riddhima also posted IG stories from their family get-together with the captions, "Love" and "Fam-jam" followed by pink heart emoji. For the fam-jam, Alia repeated her peach off-shoulder dress which she had worn at Soni Razdan's birthday bash. 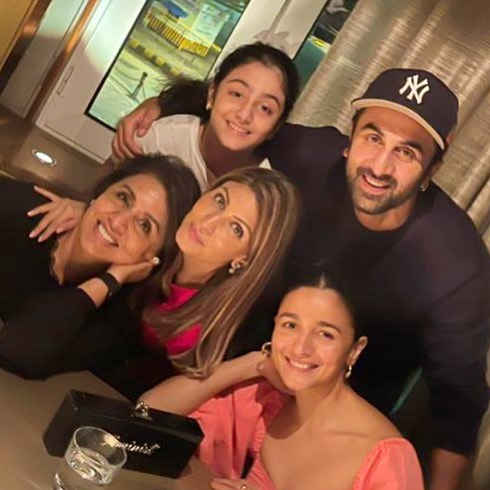 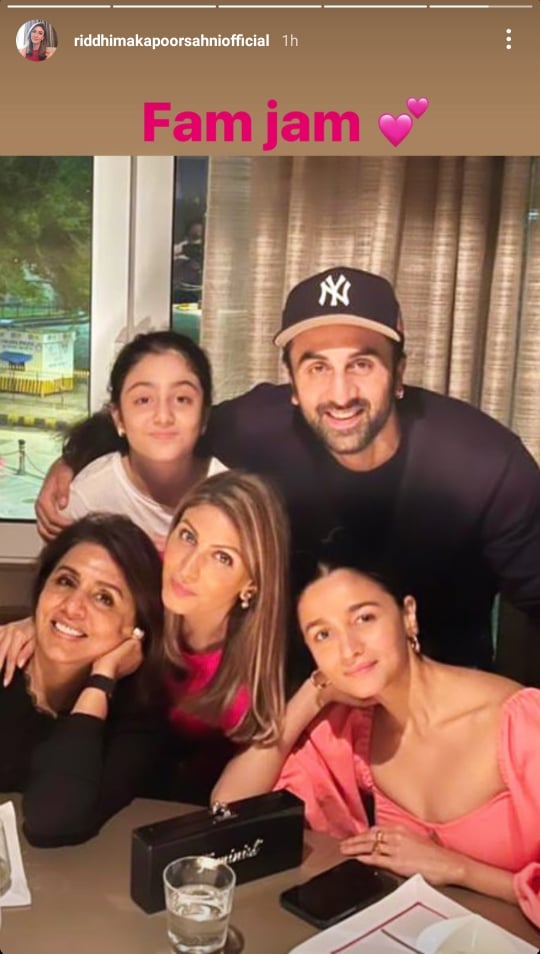 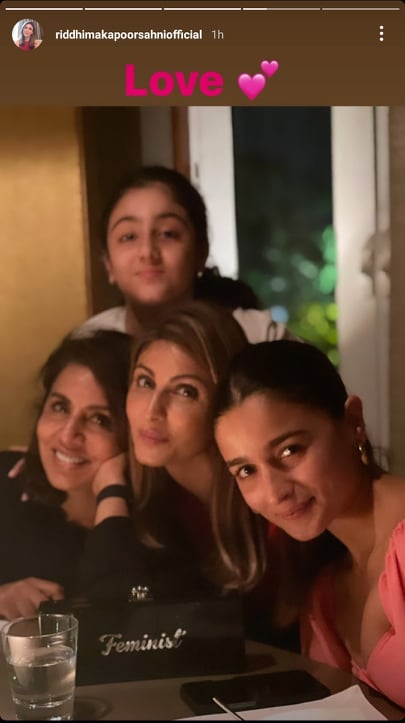 This isn't the first time that Alia Bhatt had repeated a dress as in September 2020, for Riddhima Kapoor Sahni's birthday celebrations, the actress had opted for a floral Zimmermann summer dress, which bore bell sleeves, v-neckline and a mesh bodice. Alia had complemented her look with three-strapped neutral stilettos and a white Chanel crossbody bag. It was in 2018 when Alia had shared a picture on her IG handle, wearing the same dress, which she had paired with a crossbody bag and two-strap rose gold stilettos. 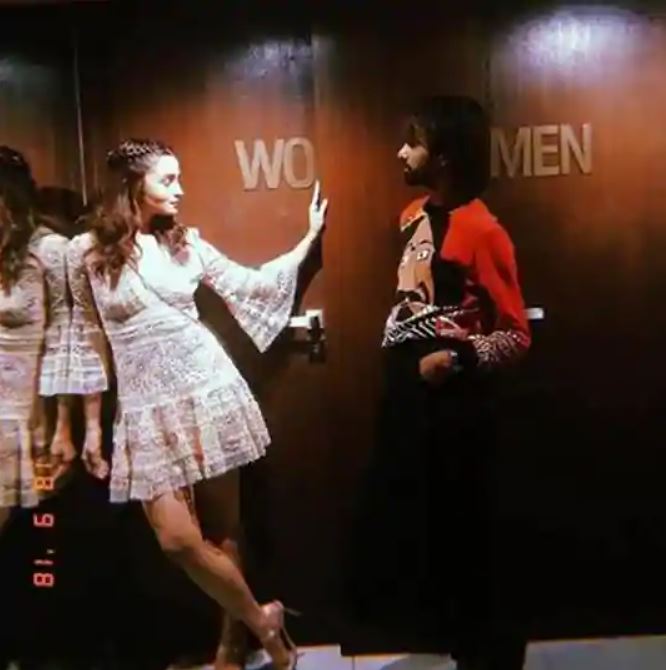 In mid-2020, Alia Bhatt was snapped at Dharma Productions office in Mumbai, in a quirky printed dress by Mira Mikati, which had stripes all over with pop art prints. Alia's outfit was a t-shirt dress-like silhouette with a skirt attached to it, which she had paired with a pair of transparent-toed white heels. Alia's 'new normal' look was completed with a dog-printed yellow-coloured face mask. Alia had repeated it dress as she had worn it before in 2018 for a dubbing session of her film, Gully Boy. As per a TOI report, the dress costs around Rs 36,841. 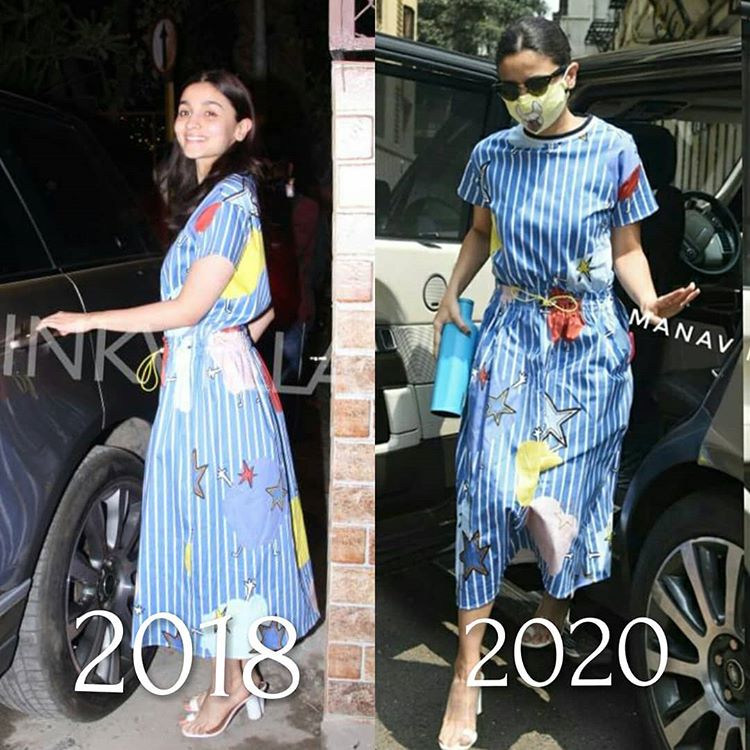 A few days ago, when Soni Razdan's father and Alia Bhatt's maternal grandfather, Narendra Nath Razdan had turned 93, the Bhatts and the Kapoors came together to celebrate the milestone. Neetu Kapoor, Riddhima Kapoor Sahni, Ranbir Kapoor and Samara Sahni had joined Soni Razdan, Shaheen Bhatt and Alia Bhatt for Mr Razdan's birthday celebrations. In one of the pictures posted by Riddhima, Ranbir could be seen photobombing her selfie with the birthday boy. 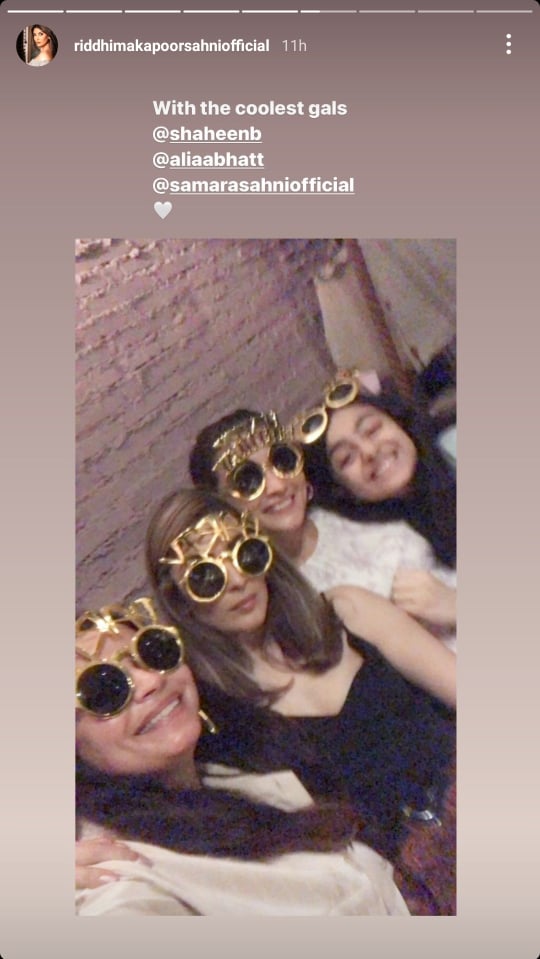 On the work front, Alia Bhatt wrapped up the shoot for her film, Gangubai Kathiawadi.