Alia Bhatt dotes on her mother-in-law, Neetu Kapoor, and there is no second thought to it. Check out as Alia reviewed Neetu's film, 'Jug Jugg Jeeyo'!

Bollywood actress, Alia Bhatt is known for her bubbly nature, incredible acting chops and fashion sense. She is one of the lucky ones who had got married to her childhood crush. Yes! Alia had always liked Ranbir Kapoor since her teenage days, and she had confessed this in many of her previous interviews. Their dreamy marriage on April 14, 2022, had the nation buzzing with happiness. Alia had looked like a beautiful bride in an ivory-hued Sabyasachi saree. Her groom, Ranbir had looked dapper in a similar coloured sherwani.

The actress shares a warm bond with her saasu maa, Neetu Kapoor and never fails to laud her with compliments. Once again, Alia sang praises for Neetu Kapoor’s comeback film and it's too cute to miss. For the unversed, Neetu had left her acting career after marrying the late actor, Rishi Kapoor. After which, whenever Neetu had appeared on the silver screen, it was always with her doting husband, Rishi.

Recommended Read: Payal Rohatgi Reveals Her Wrestler-Fiance, Sangram Singh Is Unromantic, Shares How She Trains Him On June 24, 2022, Neetu Kapoor’s comedy flick, Jug Jugg Jeeyo hit the theatres and people welcomed it with decent reviews. Among many celebs who lauded the actress with praises, it was Alia Bhatt’s sweet compliments for her saasu maa, Neetu which caught our attention the most. On June 24, 2022, Alia took to her IG stories and shared a beautiful poster of the film, Jug Jugg Jeeyo. Atop the picture, she reviewed the film and the work of the cast, which included Neetu Kapoor, Anil Kapoor, Kiara Advani and Varun Dhawan. She penned:

"Full on entertainer!! Laughed, cried, clapped and cheered. @neetu54 you are just mindblowing. @anilskapoor you had us laughing all the time. @varundvn you’re a star. @kiaraaliaadvani you’ve made me cryyy. @raj_a_mehta always hitting it out of the park!” 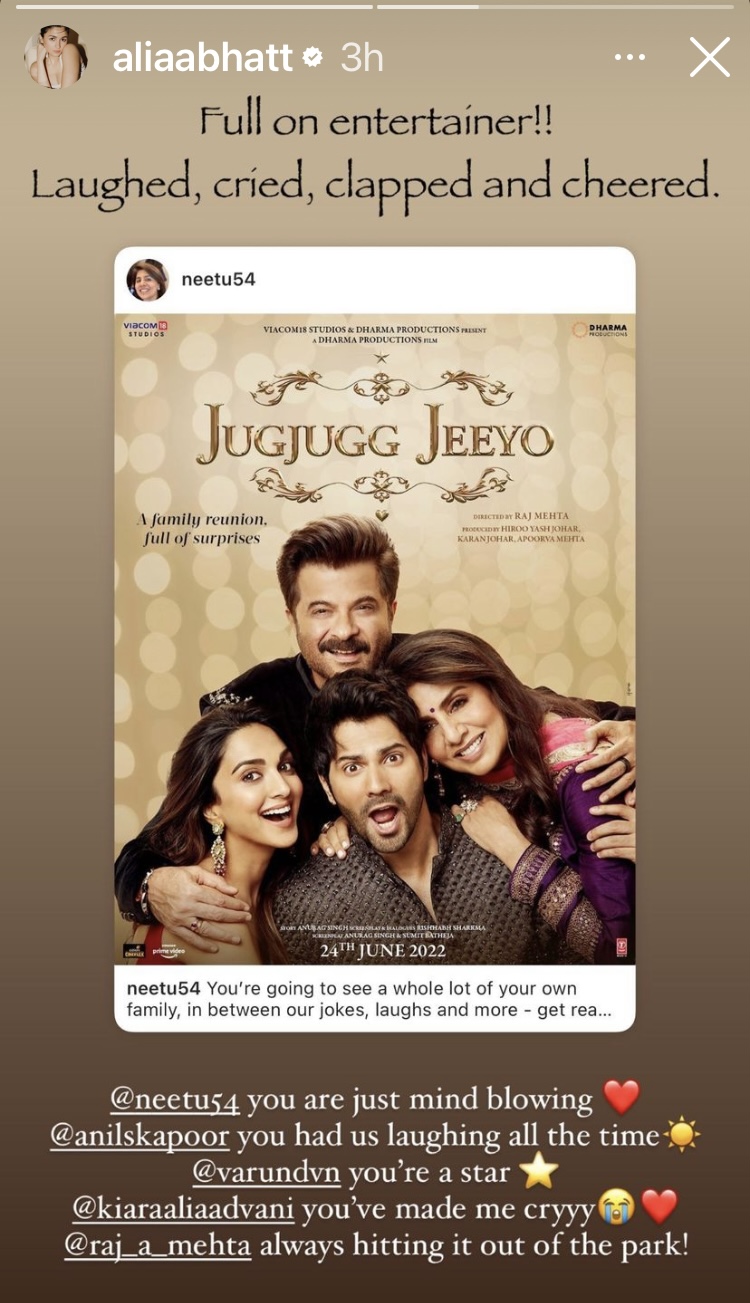 Earlier, in an interview with Ndtv, Neetu Kapoor had revealed that she had shared the script of Jug Jugg Jeeyo with her son, Ranbir Kapoor and bahu, Alia Bhatt before signing it. She had also mentioned that her children do the same before signing any new movie. Neetu could be quoted as saying:

“My family usually asks me. Like a second opinion, but not always. So whenever they have a doubt, they'll give me the script and I will go through it. But I did share it with both of them - Alia and Ranbir.” Alia Bhatt dotes on her hubby, Ranbir Kapoor, and it's clearly visible in her eyes. At an event, where Ranbir, Ayan and the ace director, SS Rajamouli were present for their movie, Brahmastra's promotions, they were missing the lead actress, Alia Bhatt. However, the feeling was mutual from Alia Bhatt's side as well. She had sent her heartfelt wishes for the team and gratitude for her fans through a video message. In the video, Alia had looked gorgeous in a yellow outfit as she had mentioned that she was present there in spirit and mostly in her hubby, Ranbir's heart. Her mushy statement had made her fans go crazy about the couple in split seconds. She could be heard saying:

"I really wish I could be there today with everyone. I am missing the whole team, Ayan, and Ranbir. But I am there in spirit and especially there in Ranbir's heart."

On the work front, Neetu Kapoor is seen in her latest film, Jug Jugg Jeeyo and Alia Bhatt will be seen in her upcoming film, Brahmastra, opposite Ranbir Kapoor.