The Kapoor and Pataudi clan are over the moon with the arrival of Kareena Kapoor Khan and Saif Ali Khan’s second-born and Taimur Ali Khan’s sibling. Alia Bhatt expressed her wish to meet the newborn.

It was in January 2021 end when Saif Ali Khan had clarified his wife, Kareena Kapoor Khan’s due month to be February and not March. A few days later, Kareena’s father, Randhir Kapoor had revealed that his daughter is ‘due around February 15’. Ever since the month of February had started, the anticipation of fans for Kareena’s delivery reached a whole new level and with each passing day, everyone hoped to get the ‘Good Newwz’ from the royal couple. Even Saif’s sister, Saba Ali Khan had begun the countdown of her sister-in-law, Kareena’s delivery. The moment finally came on February 21, 2021, when Saif and Kareena announced the arrival of their second born and the happiness of their fans knows no bounds since then as the congratulatory messages and lots of love are pouring in for the couple on social media. (Also Read: Anita Hassanandani And Rohit Reddy Finally Introduce Son, Aarav Reddy In The Most Unique Way Ever!)

On February 21, 2021, Saif Ali Khan had confirmed the arrival of his and his wife, Kareena Kapoor Khan’s second child and said in a statement to the PTI, "We have been blessed with a baby boy. Mom and baby are safe and healthy. Thank you to our well-wishers for their love and support." The elated grandfather, Randhir Kapoor had also confirmed the news of the arrival of his grandson and was quoted as saying, "She has delivered a baby boy in the morning around 9 am." Karisma Kapoor, who became maasi for the second time, couldn’t control her excitement and posted a throwback picture when her sister, Kareena was a newborn. Karisma captioned her post as “That’s my sis when she was a new born and now she’s a mama once again!! And I’m a masi again so excited #goodwishes #congratulations #onlylove.” 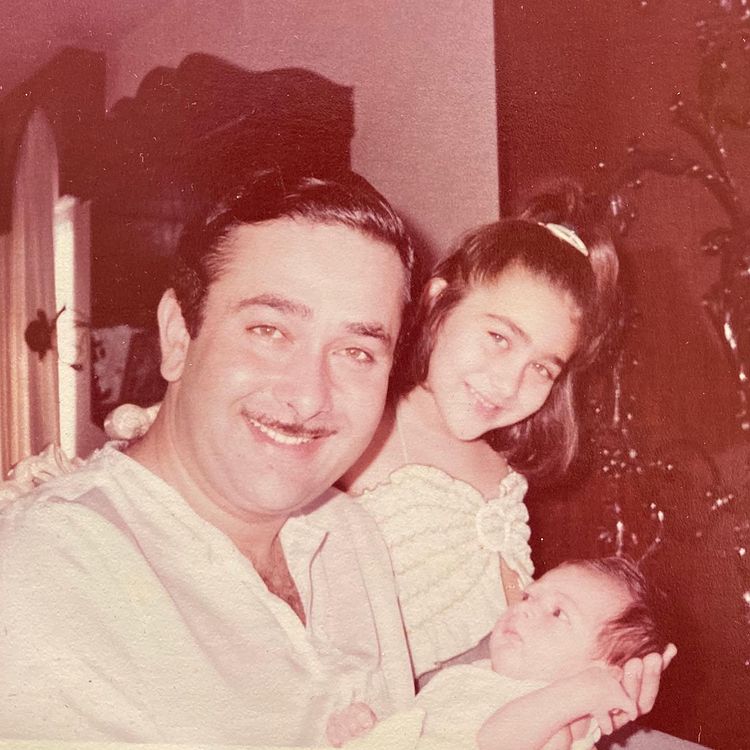 The Kapoor and Pataudi clan are over the moon with the arrival of Kareena Kapoor Khan and Saif Ali Khan’s second-born and Taimur Ali Khan’s little sibling. Kareena’s chachi, Neetu Kapoor posted a throwback picture with Bebo, Riddhima Kapoor Sahni, Bharat Sahni and Ranbir Kapoor. Congratulating Kareena and Saif, she wrote, “Congratulations @kareenakapoorkhan and Saif one more addition to the cuties.” Riddhima posted a picture of the girl gang from her 40th birthday celebrations and captioned it as “Congratulations Bebo and Saif #itsaboy @kareenakapoorkhan.” Saba Ali Khan congratulated Saif and Kareena through an IG story. Alia Bhatt too, congratulated her soon-to-be sister-in-law, Kareena and expressed her wish to meet Tim Tim’s baby brother. Kareena’s close friends, Neha Dhupia and Amrita Arora Ladak too, posted congratulatory notes for the newbie second-time parents. 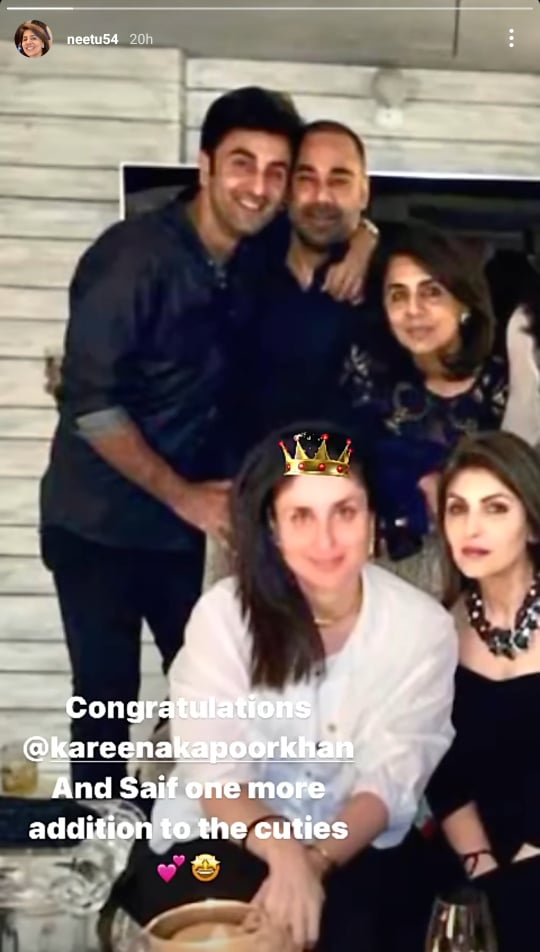 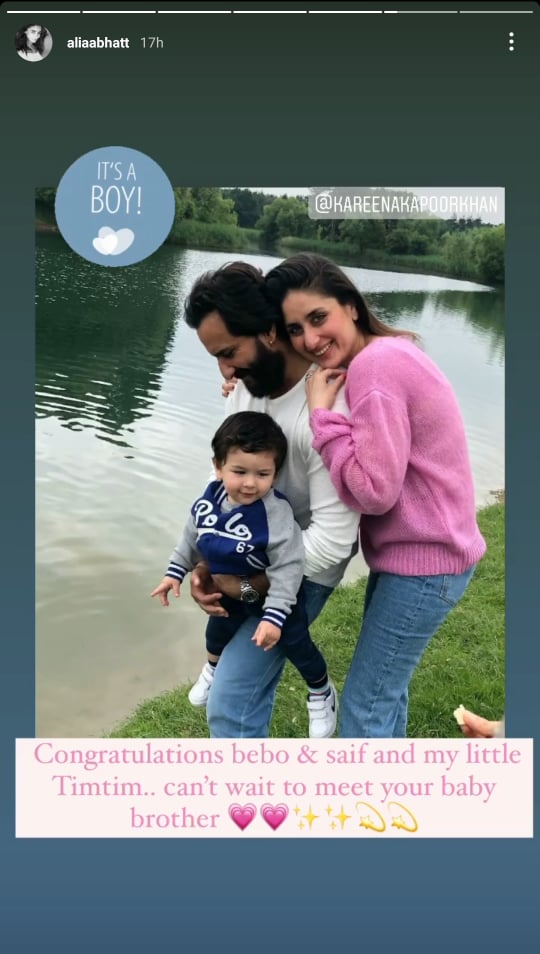 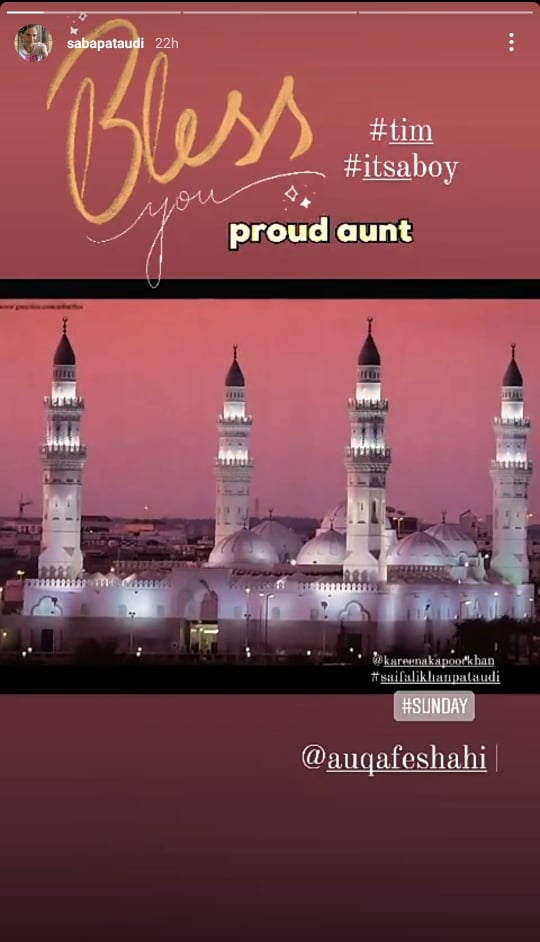 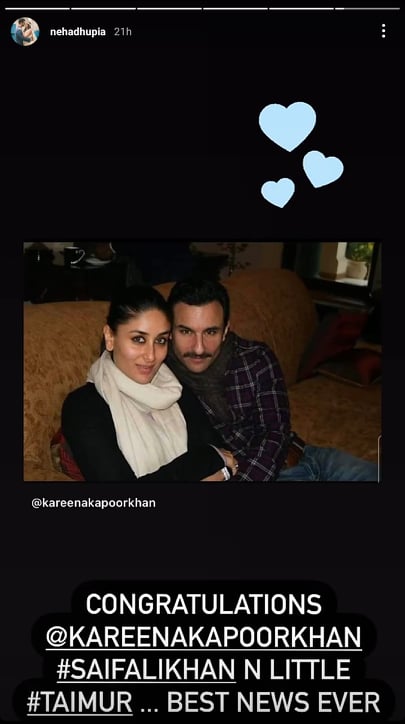 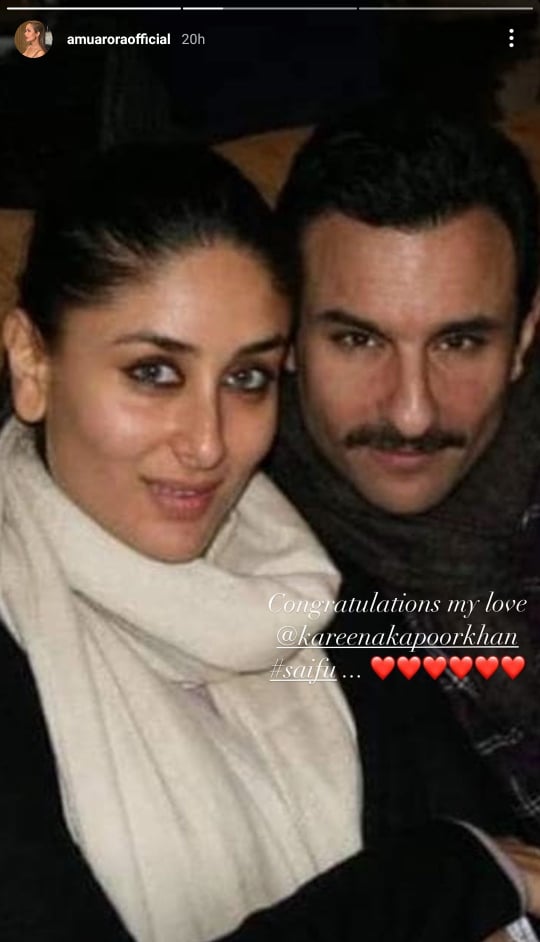 Randhir Kapoor, in an interview with ETimes, was asked if Kareena Kapoor Khan and Saif Ali Khan’s newborn son resembles his amma or abba. The elated grandfather retorted, "Mujhe toh saare bachche ek jaise lagte hain." When prodded further, had continued, "Well, they were all saying there that he looks like his elder brother Taimur." Revealing if Taimur Ali Khan danced on the arrival of his younger sibling, Randhir added, "He's too young to do so much." He also revealed that Kareena had a C-section delivery. (Also Read: Taimur Ali Khan Arrives To Meet His Newborn Brother And Amma Kareena Kapoor, Snapped At The Hospital) 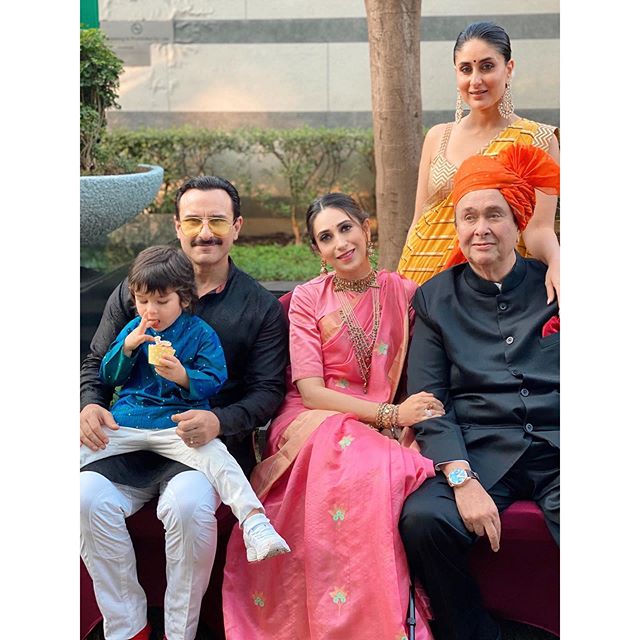 Saif Ali Khan is a proud father of Sara Ali Khan and Ibrahim Ali Khan (from his ex-wife, Amrita Singh) and Taimur Ali Khan and the newborn son (with Kareena Kapoor Khan). In an interview with Pinkvilla, Kareena had revealed that Saif loves all three of them deeply, and Taimur resembles a lot with Sara in her childhood pictures. Revealing one common thing in the three of them, Kareena had shared that it is a beautiful connection that Sara, Ibrahim and Taimur have ‘Pataudi eyes’. Kareena had also said that Saif had told her about Ibrahim’s childhood and he was a peaceful child, who would be okay if one would give him a potato chip. However, she had shared that Sara and Taimur are the feisty ones. Bebo had said, “Sara is feisty and beautiful and Taimur, I feel, is a lot like Saif also. He has that slight ‘kabhi kabhi toh thoda twist ho jata hai dimaag and I’m like ‘oh my god’.” We wonder if the youngest one too has Pataudi eyes or not!

In a Zoom interview, Kareena Kapoor Khan had revealed the first reaction of her hubby, Saif Ali Khan on knowing about her second pregnancy. Revealing that it wasn’t planned but something they wanted to celebrate, Kareena had said, “Unfortunately in my house there is nothing filmy as such. Because Saif is very normal and relaxed. Of course, he is always happy to hear it. So like I said, it wasn’t planned but it was something we really wanted to celebrate and we are really enjoying it together.” Speaking about the excitement on welcoming the new addition in their family, Saif had said in an interview with GQ, "I am very happy to welcome another tiny tot home before we get old." (Also Read: Soha Ali Khan Gives A Glimpse Of Her Little Munchkin, Inaaya Naumi Kemmu Building A Dollhouse)