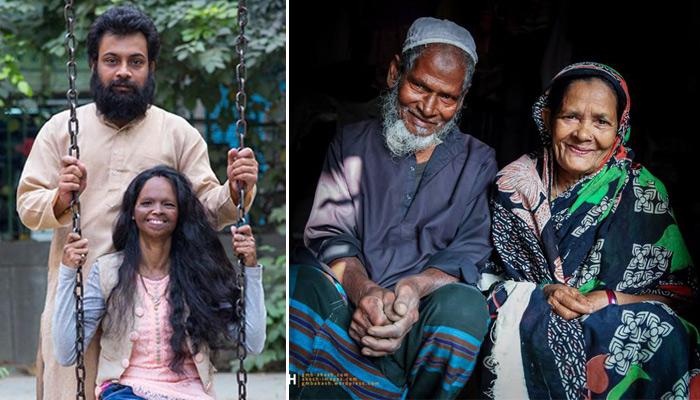 We have seen heroes taking stands for the heroines in movies to prove their love. They would go to any extent and fight with the world just for the sake of their ladies. Seldom in the real world, we witness such compassion.

Breaking up of marriages because of dowry, domestic violence and acid attacks have become common. However, in this world where women are always considered secondary, there are some men who stood up for their brides.

#1. When he didn’t let the girl’s past stop him from marrying her

This is the story of a little girl who ran away with a boy thinking that she will have her happily ever after with him. Within a month, the boy ran away leaving her pregnant. When her father discovered her after three months, he found her in a ghastly condition. She was living in a slum area. She would often shout at night asking her poor father to open the door to see if her lover has returned. She was physically and mentally weak.

Also Read: The Regal Wedding Of Sabah And Khushdeep Will Leave You With Colourful Ideas

After the birth of her son, she was advised to give the baby up but she couldn’t. His father found her a match who was a widower and a father of 4 kids. He hid about his daughter’s mental condition and a five years old son. Before the wedding, out of guilt, he told him everything. To his amazement, the groom told him that he already knew the truth as his daughter shared everything with him the day he first met her. The father was overwhelmed. They got married and he has been happily taking care of the girl and her son. For this man, she was just a woman who suffered a lot and deserves to be happy.

#2. When love was more than skin deep

Acid attacks have become extremely common in India. It is considered as a way of controlling women and teaching them a lesson if they dare go against the wishes of men. Jealous ex-boyfriends, ex-husbands and even neighbours have been using this technique to make women realise that they were wrong in going against their pursuit.
When Laxmi’s ex-boyfriend disfigured her face by throwing acid on her, she was completely shattered. She soon gathered herself as she is a fighter.

Little did she know that she will find true love again! Activist Alok Dixit is the man behind her smile. He stands by her through thick and thin. They defy all the social conventions. They now have a wonderful little daughter.

You may like: 8 Beautiful Yet Inspiring Indian Weddings That Broke All Stereotypes

#3. When he turned blind towards her disability

While marriages in India happen after a lot of consideration, this one might come as a shock. Families discuss even the minutest details based on which the decisions are taken. We read news about how a girl was rejected just because she had a mole on her face.

Vijay taught everyone that love is the only factor that should decide whether you should or shouldn’t get married to a person. He met a polio patient, Parmila, at the hospital and fell in love with her. Despite all the frictions, he married her.

#4. When the life of the wife was the most important

When he saw his wife suffering because of her kidney, he decided to give her his! When there wasn’t anything else that he could do his wife, Waseem gave Ayesha a new life in the form of a kidney.

Also Read: This Indian Couple Stunned The World With Their Unique Wedding

#5. When the husband decided to pursue his wife’s dreams

There is a woman behind every successful man but in this story, there is a strong husband who believed in the dreams of his boxer wife. We are talking about Mary Kom. The woman who brought pride to our nation could only do so because her husband supported her at every step. Despite how society saw him, Onler Karong had no problem staying at home to look after their children, while his wife was out winning medals for the country.

#6. When the love was unconditional

Bringing a child into this world is considered to be the duty of a married couple. Many marriages break if the woman fails to reproduce. When this woman could not reproduce even after five years of their marriage, the entire family persisted that her husband should marry another woman, but he chose otherwise. He left his family and chose to live with her.

Must Read: This Couple's Wedding At The Burj Al Arab Terrace Is What A Perfect, Fairytale Wedding Is Made Of

#7. When she wasn’t victim for him

In a country where a female is judged by her ‘virginity status’, it is the rape victim who is considered the culprit. When a woman gets raped, she is labeled as impure and looked at with disgust. Jitender Chhatar is one man who gave some hope that humanity still exists by marrying a rape victim. Not only did he marry her but enrolled her for law classes as well.

The world would be a better place if we had more men like these. They have proved that true love exists and can make this world a beautiful place.