They are everyone's favourite behen, bhabhi, bahu, and what not? We have seen them in so many avatars, and follow them religiously. Yes, we are talking about the popular Indian telelvision divas. Time and again, they enthral their ardent fans with their on-screen bridal looks, but this time it is their real wedding avatar that got them creating some buzz.

So, for all their fans who have been craving to get the insight on their favourite Indian TV actress’s real life wedding look, here is a look into their effort for their wedding day.

Top 5 Bollywood Divas And Their Bridal Looks In Advertisements 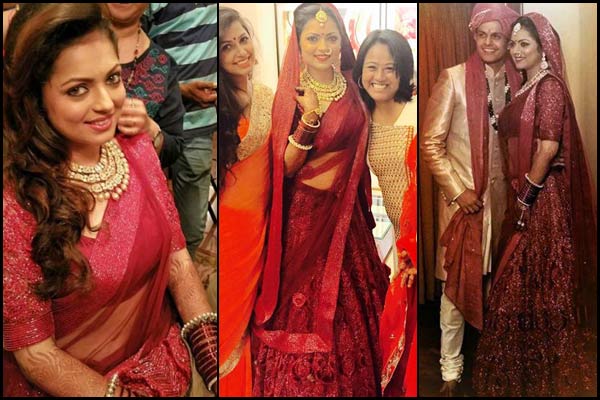 Mumbai's Sun N Sand hotel hosted the wedding of television's Madhubala aka Drashti Dhami. This pretty lady chose a classic lehenga in the bold and beautiful colour of the year, marsala. She adorned polki and pearl jewellery, and her choice of a small nose ring did justice to her peach makeup. Her look was different, simple and beautiful. 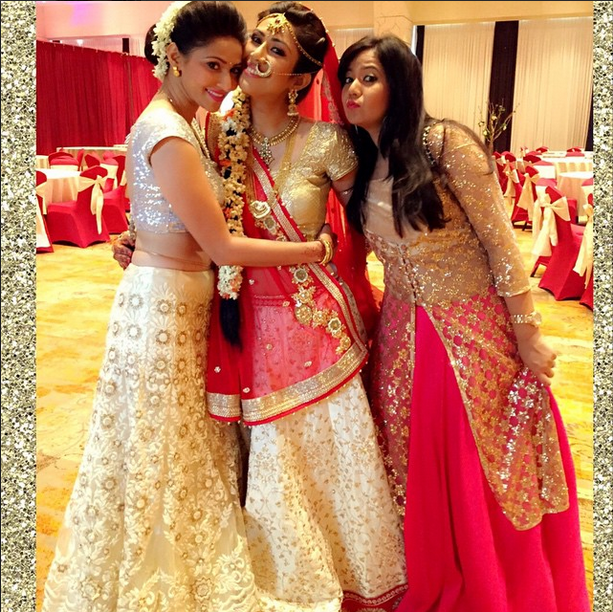 The latest of the lot, Ankita Bhargava, married her father's on-screen son-in-law, Raman Bhalla, aka Karan Patel, for real (Read Here). Ankita made sure that she looked a stunner on her big day. She picked a white and gold lehenga with a red border for her wedding day. Her red net dupatta was as beautiful as it could be. She kept her hair braided and covered in flowers, and accessorised herself with gold jewellery which also included, a stunning matha patti and a matching nose ring. 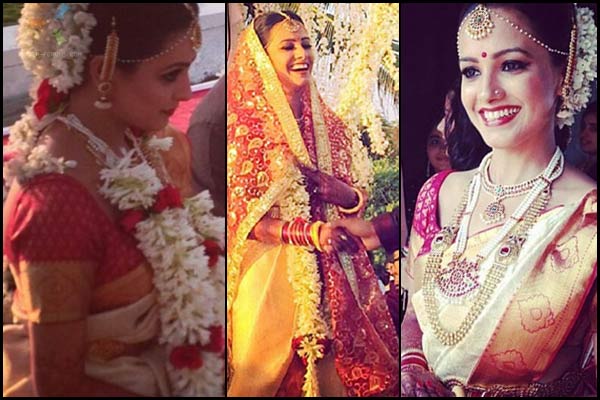 Anita's wedding was a cultural mix, as she is a Punjabi and her husband, Rohit Reddy, hails from Andhra. Their wedding ceremonies incorporated the traditions of both the ends. Anita, however, chose to go in for a typical South Indian bridal look on her wedding day. She draped a gold and white South Indian Kanjeevaram silk saree, and completed her look with a gajra. She paired up authentic temple jewellery in gold and pearl. 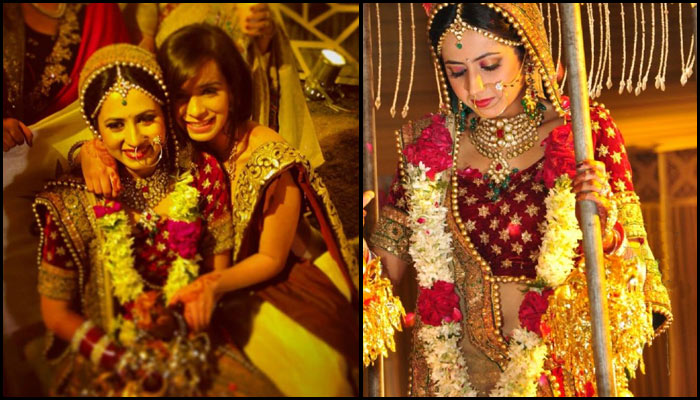 TV actors Sargun Mehta and Ravi Dubey's wedding was a typical Punjabi affair with all the band, baaja and baraat. Sargun was decked up in a heavy maroon and gold lehenga with a velvet blouse. She added a little green in her dupatta and jewellery. The entire jewellery was in kundan.

Also Read: This Is How Ravi Dubey And Sargun Mehta Once Made Their Long-Distance Marriage Work

Rakshanda Khan made a beautiful bride in a red lehenga for her Nikah with co-star, Sachin Tyagi. For the jewellery, she chose every woman's best friend, diamonds teamed up with ruby. Her eyes were rimmed in deep dark kohl, which gave her an unconventional look. The blue lining in her red lehenga complemented Sachin's royal blue sherwani.

Recommended Read: The True Significance Of Bangles In Indian Culture 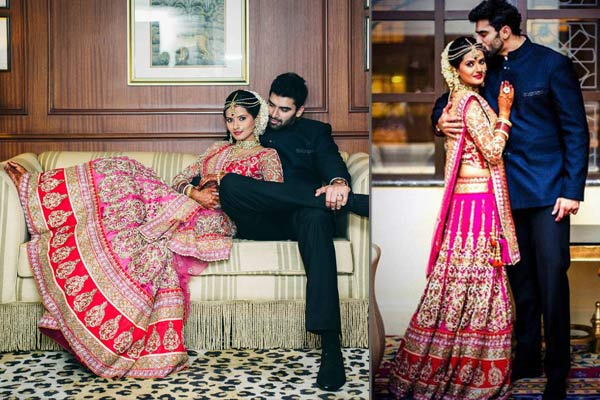 Kratika Sengar and Nikitin Dheer tied the knot on September 3, 2014. The Jhansi Ki Rani actress flaunted a heavy dabka work lehenga in pink and red. Her blouse had beautiful net sleeves with zircon (precious gemstones) work on them. Her kundan jewellery and choice of matha patti made her look like a real life queen.

Also Read: 6 Trendy and Stunning Neck Designs For The Blouse Of Your Bridal Outfit 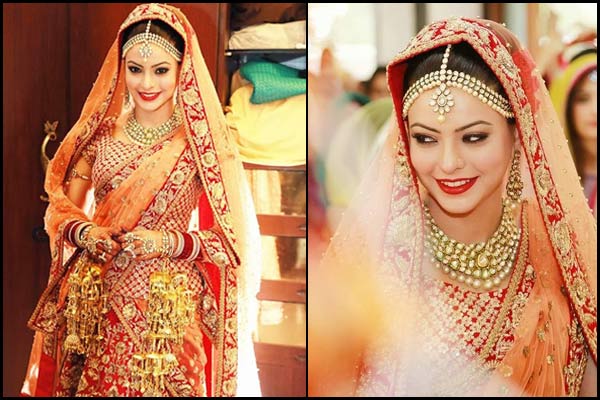 Aamna Sharif tied the knot with her film distributor-turned-producer boyfriend, Amit Kapoor, in a stunning red lehenga. Her dress had golden work on it, but the dupatta was of peach colour, which added a soft touch to the entire look. Her jewellery was in polki, kundan and pearl. Her bright red lipstick made her a gorgeous bride.

Also Read: This Picture Of 'Kahin Toh Hoga' Fame Aamna Sharif With Her Baby Boy Is Motherly Love In A Frame Indian television actress, Aishwarya Sakhuja, married her long-time boyfriend, Rohit Naag. She wore a silk lehenga with heavy work in it. She wore antique gold jewellery and completed her look with heavy smokey eye makeup. The highlight of her ensemble was the dupatta, which she had worn over her head, as it was intricately designed with pretty little gold beads all along the border highlighting the gota work. 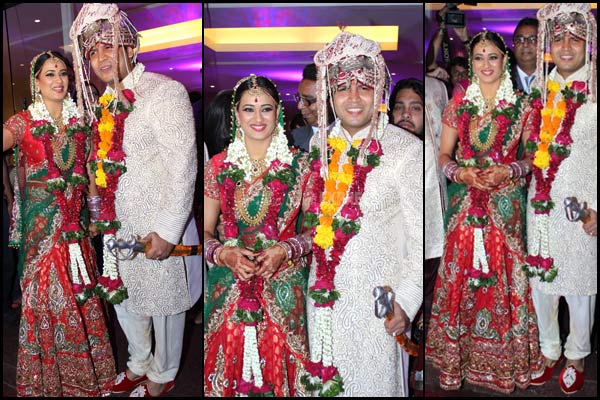 After facing some struggle through her first marriage, Shweta Tiwari found happiness again with Abhinav Kohli, her co-star from Jaane Kya Baat Hui. She chose to don a bright red and green lehenga with antique gold and kundan jewellery. The minimal makeup and gajra in her hair completed her look. 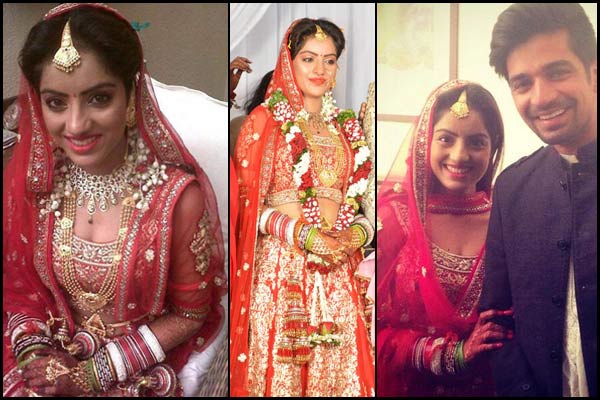 Deepika Singh found love in her show’s (Diya Aur Baati Hum) director, Rohit Raj Goyal. She picked a Salima Lalani's creation for her wedding day. It was a red and gold lehenga with pita embroidery embedded with Swarovski crystals. She opted for gold jewellery and paired it with a diamond neckpiece.

Also Read: Deepika Singh Shares The First Picture Of Her Baby Boy And He Is So Cute 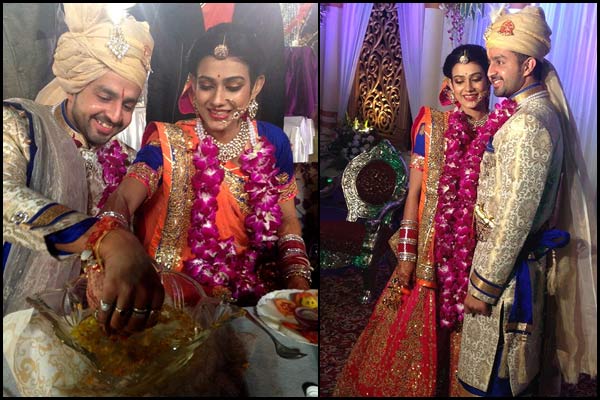 Aakanksha Singh chose to be a colourful Rajasthani bride. Her lehenga was in bright pink, orange and blue colours with Jaipuri embroidery. Her eyes were well done, while other features were not too loud. Her jewellery was in kundan and she wore a traditional borla (a type of maang tikka worn by Rajasthani and Haryanvi brides). 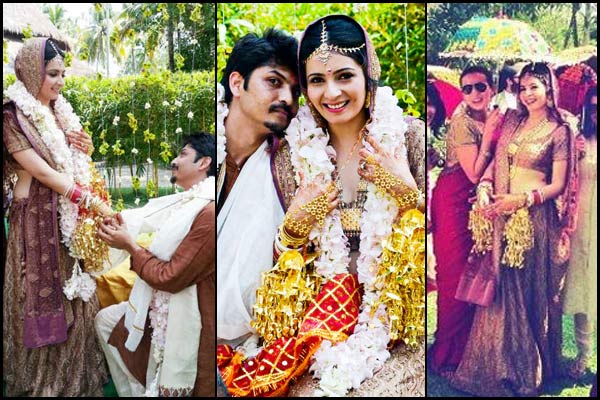 IPL host, Shonali Nagrani, tied the knot with her boyfriend, Shiraz Bhattacharya, in Kerala. It was a typical South Indian wedding, where she wore a Ritu Kumar outfit and antique gold jewellery. Since the wedding took place during daytime, she kept the makeup really simple.

Laughter queen, Bharti Singh got married to her long-time boyfriend and fellow comedian, Haarsh Limbachiyaa, in a Goan beach wedding on December 12, 2017. After a fun-filled pre-wedding function of 3 days, Bharti Singh’s wedding day arrived. On her D-day, Bharti was seen as a perfect dulhan in Adhya’s blue and fuschia pink lehenga with a beautiful Swarovski worked dupatta. From her jewellery to her makeup to her hairstyle, everything was on point.

Don't Miss: Bharti And Haarsh's Unique Wedding Has The Most Unique Planning Tips For All Brides-To-Be 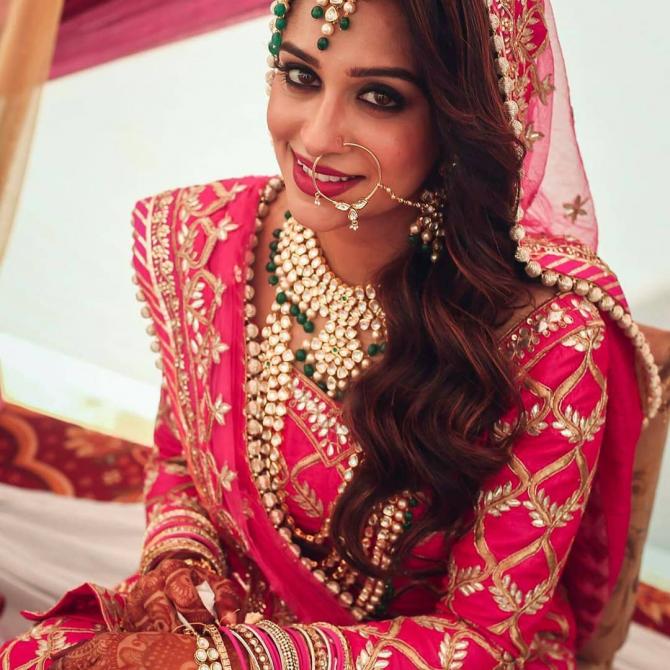 Dipika Kakar and Shoaib Ibrahim said Qubool Hai on February 22, 2018. It was a very earthy wedding in Shoaib’s hometown in Madhya Pradesh. In her wedding look, Dipika looked mesmerising in a pink sharara which she accessorised with kundan jewellery and paasa. Just like a quintessential Muslim bride, Dipika looked ethereal in her bridal look which was enhanced by her kalire. 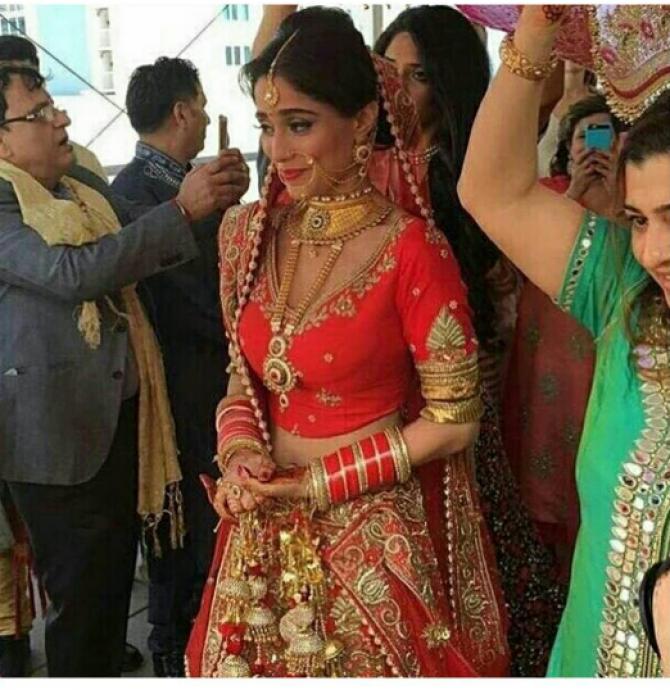 Television actress, Somya Seth and US-based filmmaker, Arun Kapoor got hitched in a private ceremony on January 15, 2017. For her wedding avatar, Somya chose a traditional red lehenga, complete with chooda and kalire. She looked every bit like a princess in her bridal finery. Her makeup and jewellery were so on the point! F.I.R fame actress, Kavita Kaushik got married to Ronnit Biswas on January 27, 2017. On her wedding day, Kavita chose to wear a beautiful red-coloured Banarasi silk saree. She donned up her entire look with a delicate matha patti, sleek kamarband, beautiful kaliras and a pretty neck piece. Plus, she opted for a minimal makeup look. And, no doubt, she looked like a dream on her D-day. 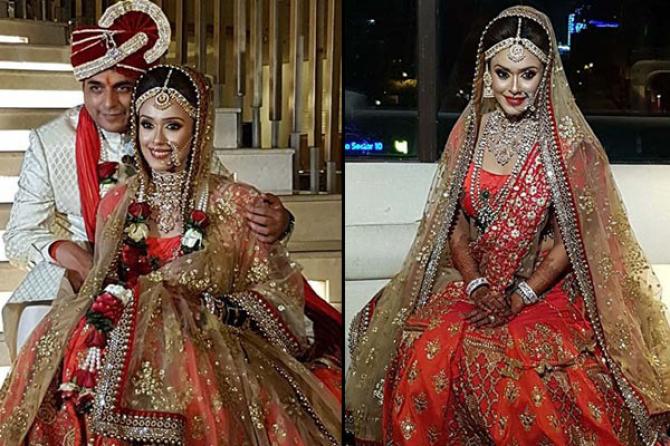 Hrishita Bhatt and Anand Tiwari took the wedding vows on March 4, 2017. Hrishita looked stunning on her D-day in a heavily embroidered orange-red ensemble by Preeti Singhal. She chose to wear heavy choker set along with a beautiful pair of juttis. She looked very ethnic and beautiful in her wedding avatar. 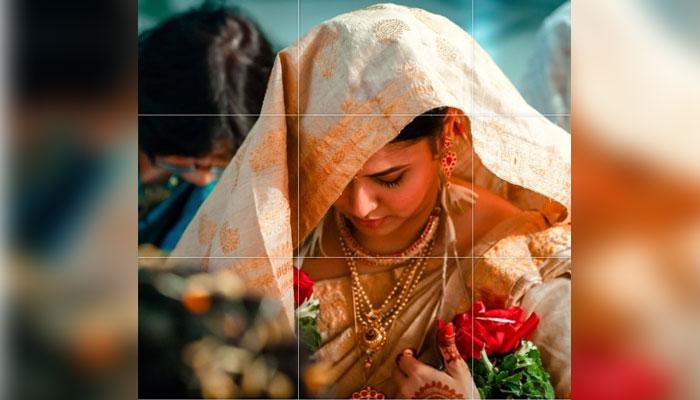 Panchi Bora is a pretty well-known name because of the famous soap opera Gangaa. For her wedding avatar, Panchi looked resplendent in her beige-coloured elegant saree teamed up with minimal makeup and sleek gold jewellery. Panchi got married to her long-time beau Jaydeep on January 17, 2017. 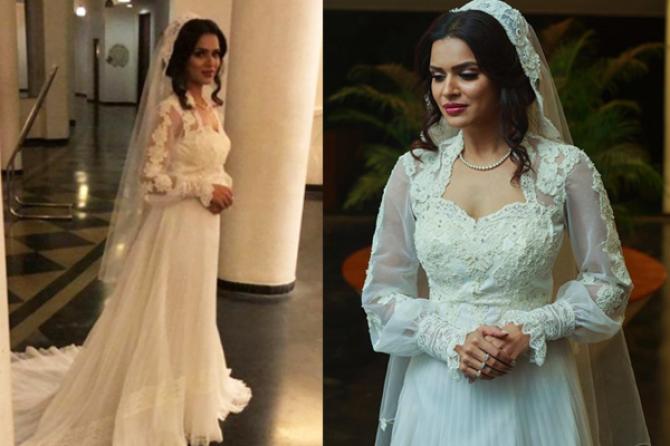 TV actress, Aashka Goradia got married to Brent Goble on December 3, 2017. The couple had two weddings- a Christian white wedding and a traditional Hindu wedding. For her white wedding, Aashka opted for her mother-in-law Renee's bridal gown for the Christian-style ceremony. The trail, lacework gown with floral appliqué and bouffant sleeves made the attire eye-catching. She teamed up her whole dress with a delicate diamond necklace. 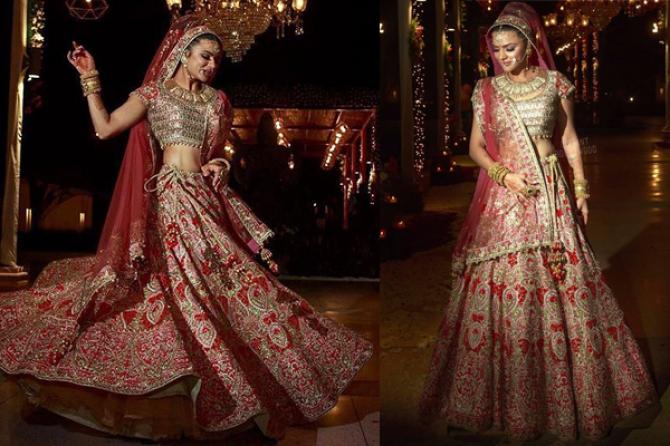 For her Hindu wedding, she opted for a maharani-style lehenga. Gold kasab choli, light tulle odhna with delicate metal sequins made it a rich and ultra-feminine number.

Also Read: 'Royal With Elegance' Bridal Looks Of Aashka Goradia That Brides-To-Be Can Get Inspire From Well, this is how these Indian television divas rocked their bridal outfits for their real life big occasion. So, whichever is your favourite look of them all, tell us about it in comments section below.