High school sweethearts Krystel Ciocon and Earle Doudera, bonded over a million things, but it is their love for Star Wars that really deepened their relationship. After dating for six years, the two got engaged in 2015, but a Star Wars-themed wedding was not in picture at all, as their families wanted a traditional wedding.

7 Best DIY Ideas To Save Money On Wedding Decor

Top Reasons Why You Must Have A Wedding Website

But, thank heavens for they listened to their hearts, and the couple enjoyed their day the way they wished to. In an interview with The Knot, Krystel said:

“It involved an elaborate plan of chocolates, airplane, hiking, and a handwritten note folded just the way we used to in high school. He planned so much into it.” So, what changed their minds and what stopped them from bothering about what the world thinks? Well, for Krystel, it was that one question Earle asked her, that got the two to tie the knot in the way they wanted to.

“But sometime during the planning phase, after getting overwhelmed with everyone telling me how I should do the wedding, Earle pulled me aside and asked me ‘What is YOUR dream wedding?’

The answer to which was obviously a star wars-theme wedding. You must be thinking what on Earth does that mean, no? Here's what she meant:

“I wanted to be a part of this fantastic universe, and all the ideas just fell into place.”

Initially, the couple received some backlash from their families about their unconventional approach, and of the two it was Krystel who got sick of hearing what people were saying. She was fed up of telling everyone about her dream wedding.

Recommended Read: This Bride Missed Her Father At Her Wedding But It Was Her Groom Who Made Us Cry

Kyrstel’s mother did not warm up to the idea of such a wedding, but when she started helping with planning and décor, she really got into the groove and quite enjoyed it. Unfortunately, Earle’s sister gave this wedding a miss because it was Star Wars. But, with this comes into mind the finances and the bride didn’t think it was possible. It was Earle who was convinced that they can make it happen, saving every single penny to manage this theme wedding in less than $5000.

Must Read: 10 Famous Celebrity Couples Who Had Stunning Destination Weddings

The two in fact decided to get married in the backyard of the new California home they purchased from their wedding fund. In another interview with Buzzfeed, they said:

“After going from venue to venue, we came to the conclusion that it was not worth our money to spend in one place, even the most affordable venue we found,” Ciocon explained. “So we took our wedding funds and put it as a down payment for a house instead.” >Back in the day, it was the Battle of Mustafar in Episode 3 that encouraged Earle to buy his own sabre. In fact, it is this Battle that inspired him to choreograph their first dance.

“The lightsaber battle/first dance was amazing to do, considering we couldn’t get one dance rehearsal where everyone could make it. The day of the wedding was the first day that everybody did it together. The dance is also Earle’s favorite!” [Watch: This Indian Father's Emotions At His Daughter's Wedding Will Definitely Leave A Lump In Your Throat] 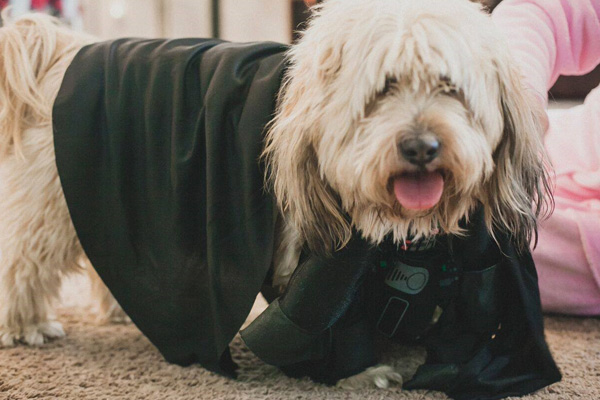 It was Krystel’s mom who wanted Benji, the family dog to be dressed up as Darth Vader, but Benji got himself out of it in about an hour! 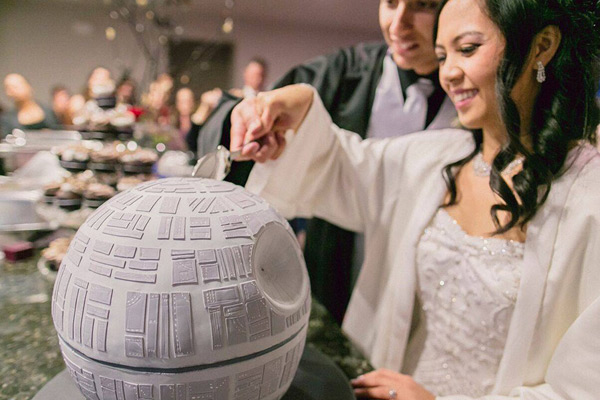 The cake was special too because it was the Death Star cake that was pointed at trash cans labelled Alderaan. Not just that, even the tables were named after planets. Must Read: This Lavish Wedding Of The Chinese Kim Kardashian Cost A Whopping $31 Million!

Not just Star Wars, but the wedding also incorporated elements of Krystel’s Filipino heritage. The Filipinos have a wedding tradition of having veil and cord sponsors. Here, the male and female veil sponsors were Obi-Wan and Anakin, and the cord sponsors were Han Solo and Chewbacca. >In such weddings, a wedding photographer has a crucial role to play. He/she needs to be someone who is able to comprehend the requirements of the couple, and brings out the desired dramatic elements. We think Bryan, their photographer did a splendid job, because nothing was planned or staged, everything was spontaneous. 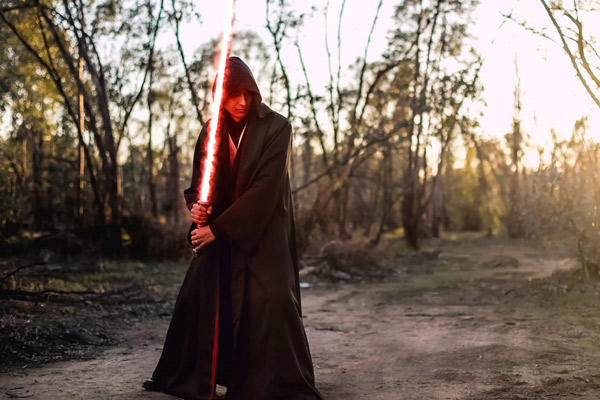 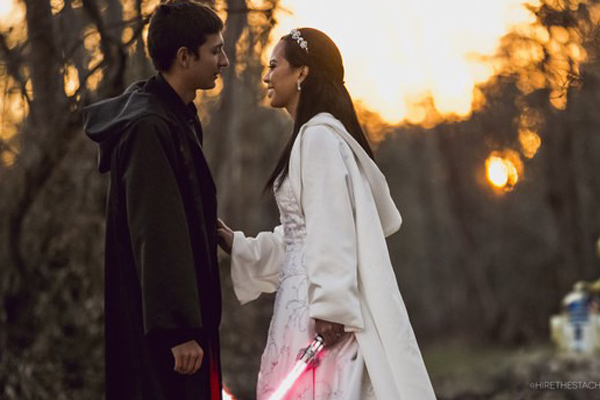 Must Read: 6 Most Expensive Bollywood Celebrity Weddings That Will Leave You Stunned

So guys, what do you think of this wedding? As for us, we would like to congratulate the two for having made their dream wedding come true. Also, how can we sign off without saying: MAY THE FORCE BE WITH YOU!

7 Best DIY Ideas To Save Money On Wedding Decor

Top Reasons Why You Must Have A Wedding Website