The family that goes on vacation together, stays together! Scroll down as Bollywood's 'King Khan', Shah Rukh Khan is holidaying in the Maldives with his family!

It's been 27 years since a dimpled man with center-parted hairdo named Shah Rukh Khan walked onto our screens and stole our hearts! He proved to us that there is no dream that's too difficult to achieve. Way before he won the title of 'Badshaah', standing on the marine drive he had claimed to rule the city of dreams - Mumbai, and well, he did not just rule the city but the entire nation with his acting skills and signature steps. (Recommend Read: Rohman Shawl Finally Asks Sushmita Sen 'Chal Bhaag Chalte Hain', We Wonder What She Will Answer)

In the ’90s, when we knew nothing about true love, Shah Rukh made us believe in it with a simple dailouge, ‘hum ek baar jeete hai, ek baar marte hai, shaadi bhi ek baar hoti hai or pyaar bhi ek baar hi hota hai’. If given a chance, the actor can write a whole book on the value of love and family. After all, he had perfectly balanced his work and personal life. No matter how busy he is in work, the actor makes sure to take out time for his kids and wife. Currently, Shah Rukh is holidaying in the Maldives with his wife, Gauri and kids, Aryan, Suhana and AbRam. We got hold of their pictures from their airport. While the actor looked stunning in a white sweatshirt, Aryan and Suhana donned a black ensemble for their jet-set-style. Take a look at the pictures below:

Recently, in an interview with Filmfare, Shah Rukh had revealed that he is not signing any films right now as he wants to spend some quality time with his family. He had shared, "I have no film with me right now. I am not working on any film. Usually what happens is when your one film is coming to an end, you begin work on your next film and I get involved within 3-4 months. But this time I am just not feeling like. My heart doesn't allow me to. I just felt that I should rather take time out, watch films, listen to stories and read more books. Even my kids are in their college stage, my daughter is going to college and my son is about to finish his studies. So I just want to spend more time with my family." (Also Read: Inaaya Naumi Kemmu Chasing And Calling Out A Pigeon Is The Sweetest Thing On Internet Today [VIDEO]) Earlier, in an interview with the DNA, Shah Rukh had talked about his relationship with his kids. He had shared how he is as a father, and had stated, "I’m a really cool father. When I am with Aryan sometimes, we just lay down in our shorts without our shirts and we crack some dirty jokes. He gets really excited telling me about gaalis he’s learnt. I’m from Delhi and I’ve also been that age and my vocabulary of Hindi gaalis is fantastic (smiles). So when he tells me one, I tell him that I’ll teach him another version of it. So that’s cool. We talk a little about filmmaking because he’s learning that. But he would like to recede from that because he wants to learn it on his own. We watch films and while watching them, we talk about certain aspects of filmmaking. We talk about getting into trouble, picking up fights, how to beat up the other guy or answer back when a guy messes with you. He talks about his ambitions, and where he would like to be one day. But he’s very clear that way. He just wants to be bigger than me and that’s cool. Then, we make fun of family members — he does this, she does this. We also go shopping, buy some boy T-shirts. He’s more colourful than I am, which is nice. He’s not grey, blue and black like me." In the same interview, Shah Rukh had also opened up about his daughter's dream, and had said, "Suhana wants to be an actress. I see that zeal in her. She’s extremely good on stage, I’ve seen her performances. She’s admittedly a cinema fan and wants to be in the industry. But my point is simple — you need to complete your education before doing anything. That’s the only thing I have told my children. Otherwise, they are free to be in the film industry, not be in it and do whatever they like. I will be supportive of whatever they want to do. While Aryan has now grown up and is more macho, he’s building his body and all, Suhana is more loving. I think she’s the softest person in the house. And AbRam is my little monster." (Don't Miss: Sidharth Malhotra Failed Class 9 Due To Girls' Distraction, Wants To Kidnap This Bollywood Star Kid) 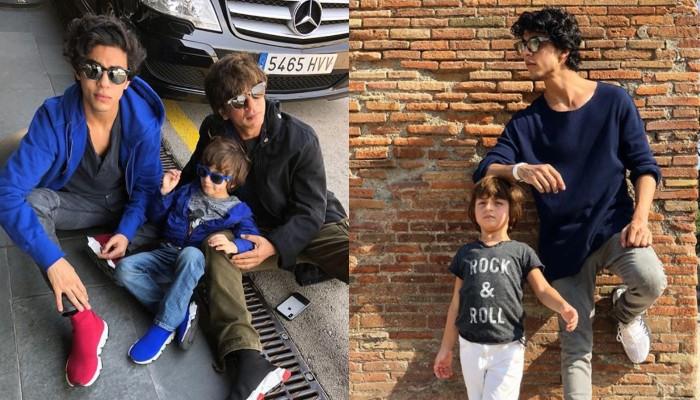 The 'King Khan' of Bollywood, Shah Rukh Khan has been ruling hearts for more than two decades now. However, now, it is not just him, but also his kids, Aryan Khan, Suhana Khan and AbRam Khan, who make news with every move that they make. While Aryan's uncanny resemblance with his daddy leaves everyone