On December 9, 2022, Katrina took to her IG handle and wished her hubby, Vicky in the most romantic way. The first picture was from Vicky and Katrina’s wedding ceremony, and the second one was from their recent romantic getaway to the hills. We also got a glimpse of Vicky’s hilarious dance, making wifey, Katrina laugh her heart out in the background. She simply captioned her post as “My Ray of Light. Happy One Year.” But, it was Sham Kaushal’s comment on his bahu’s post which was unmissable as he wrote:

Ahead Of Vicky And Katrina's Wedding, Pictures Of Their Wedding Outfits Are Going Viral

“Happy Anniversary. May God’s blessings be always with u. Puttar, u have brought so much happiness to the family. Love & blessings.”

Also Read: Kajol Gets The Sweetest Reaction From Ajay Devgn As He Calls her 'Superlative' in 'Salaam Venky' When Katrina Kaif visited the popular comedy chat show, The Kapil Sharma show during the promotions of her upcoming film, Phone Bhoot, the actress opened up about how her life changed after her marriage to Vicky Kaushal. In the show, she revealed getting a cute nickname from her in-laws, Sham Kaushal and Veena Kaushal. Talking about the same, the actress stated that her in-laws lovingly call her Kitto.

Recommended Read: Shoaib Malik Reacts On Reports Of His Divorce With Wife, Sania Mirza, Calls It A 'Personal Matter' For the unversed, Vicky Kaushal and Katrina Kaif got married on December 9, 2021, away from the media glares. Vicky and Katrina they tied the knot in an intimate ceremony at the Six Senses Fort, Barwara in Sawai Madhopur, Rajasthan. And since then, we have been witnessing sweet moments from their marital bliss. Isn’t Sham Kaushal a doting father-in-law to Katrina Kaif? What do you think about his adorable comment? Let us know.

Also Read: Sharmila Tagore Gets A Sweet Kiss From Taimur Ali Khan And Inaaya Naumi Kemmu On Her 78th Birthday

Katrina Kaif Talks About Her In-Laws, Sham Kaushal And Veena Kaushal, Reveals They Call Her 'Kitto' 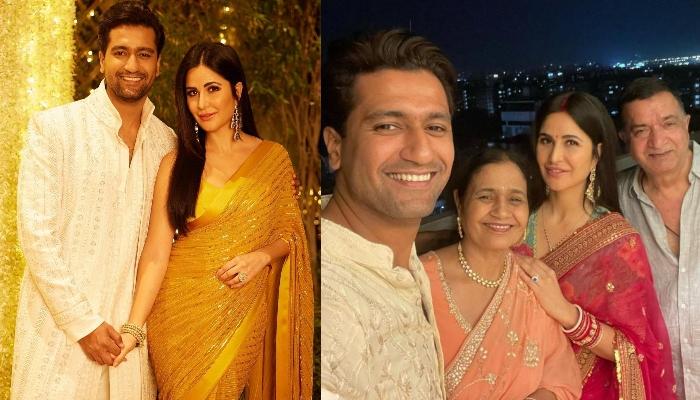 Katrina Kaif is one of the most amazing actresses in Bollywood. She rules over millions of hearts, courtesy of her pleasing personality. The actress has made a name for herself in the entertainment industry with films like Bang Bang, Boom, Tiger Zinda Hai, Dhoom 3, Ek Tha Tiger, Baar Baar

Ahead Of Vicky And Katrina's Wedding, Pictures Of Their Wedding Outfits Are Going Viral