'Bigg Boss 13' fame, Nikki Tamboli shared a heartbreaking note on her late brother, Jatin Tamboli's birthday along with an unseen childhood picture on her Instagram handle.

The popular celebrity model and Bigg Boss 14 fame, Nikki Tamboli, had gone through one of the most traumatic phases of her life in 2021, when she had lost her brother, Jatin Tamboli, on May 4, 2021, to COVID-19. Since then, her social media handles have been filled with her late brother's pictures and touching notes dedicated to him. This time around, on Jatin Tamboli's birth anniversary, his doting sister penned a few words for him, along with an unseen picture with him from their childhood days.

Soon after her brother, Jatin Tamboli's demise, Nikki Tamboli had shared a picture of her late brother, Jatin Tamboli, and had penned a note atop it. Her note could be read as, "Death is nothing brother, it's life that is hard. But you fought it till the end… It's very very difficult to live without you. All the memories come back but you don't."

Nikki Tamboli Shares Emotional Post For Her Father, After He Lost His Mother And Son In Just 14 Days 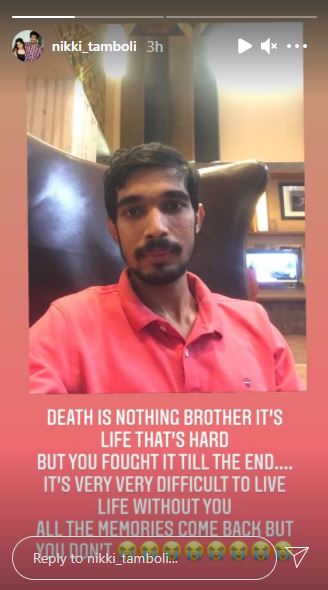 On November 24, 2021, Nikki Tamboli took to her Instagram handle and dropped two pictures on her late brother, Jatin Tamboli's birth anniversary. While the first photo is a painful note that Nikki has penned for her brother, the second one is a rare picture from their childhood days that is nothing but way too adorable. In the throwback picture, Jatin can be seen holding his baby sister in his arms and giving a quirky expression while posing away from the camera. Along with the pictures, Nikki wrote, "XXIV.XI.MCMXC" in the caption. Nikki's touching note for her brother in the first photo can be read as:

"It's your birthday brother!! Last year I was inside the Bigg Boss house, I prayed to God for letting go off your pain. So next year on your birthday I can show you the beautiful world. God hears the prayers that are offered by those who place their trust in him. Those we love never truly leave us. There are things that death cannot touch. You are in a better place brother. Happiness to you wherever you are. Always and forever. We miss you." 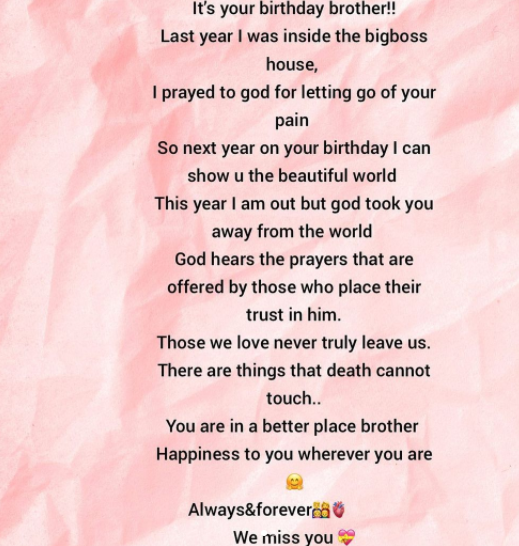 Earlier this year, on November 6, 2021, Nikki Tamboli had taken to her Instagram handle and had shared a picture with her late brother, Jatin Tamboli. Along with the pictures, the doting sister had recalled the days of her childhood with her brother, which she can never bring back. Her emotional note for him on the occasion of Bhai Dooj could be read as:

"The pious occasion of bhai dooj reminds me of the days when we were kids. We fought & made up easily. Those lovely days cannot come back but will always stay in my heart. Our mind holds the memories. Our heart keeps the love. Our faith lets us know we will meet again….Happy Bhai Dooj Brother." 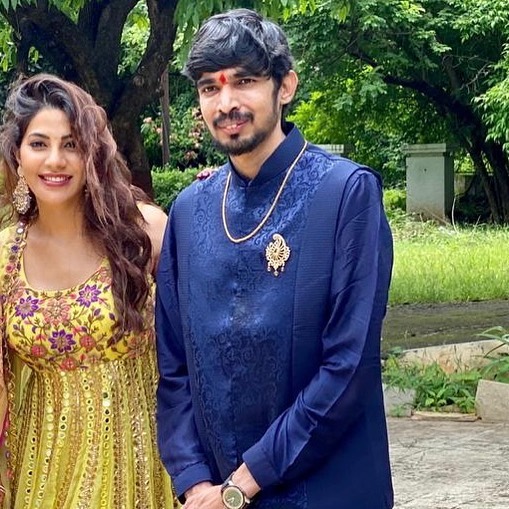 It was on May 4, 2021, when Nikki Tamboli had shared the heartbreaking news of her brother, Jatin Tamboli's untimely demise by posting two pictures on her IG handle. The tragic news had left her entire fanbase and people in massive shock. Alongside her brother's pictures, Nikki had penned a touching note for him and had shared that although they are not together, they will reunite with each other one day. Nikki's painful note could be read as:

"You gave no one a last farewell Not ever said good bye You were gone before we knew it, And only god knows why, A million times we will miss you, A million times we will cry, If love alone could have saved you, you never would have died, We will meet again someday. I thank God he made you our brother while you were here on earth. You are always loved immensely and never forgotten. May your soul Rest in peace!! I miss you dada." 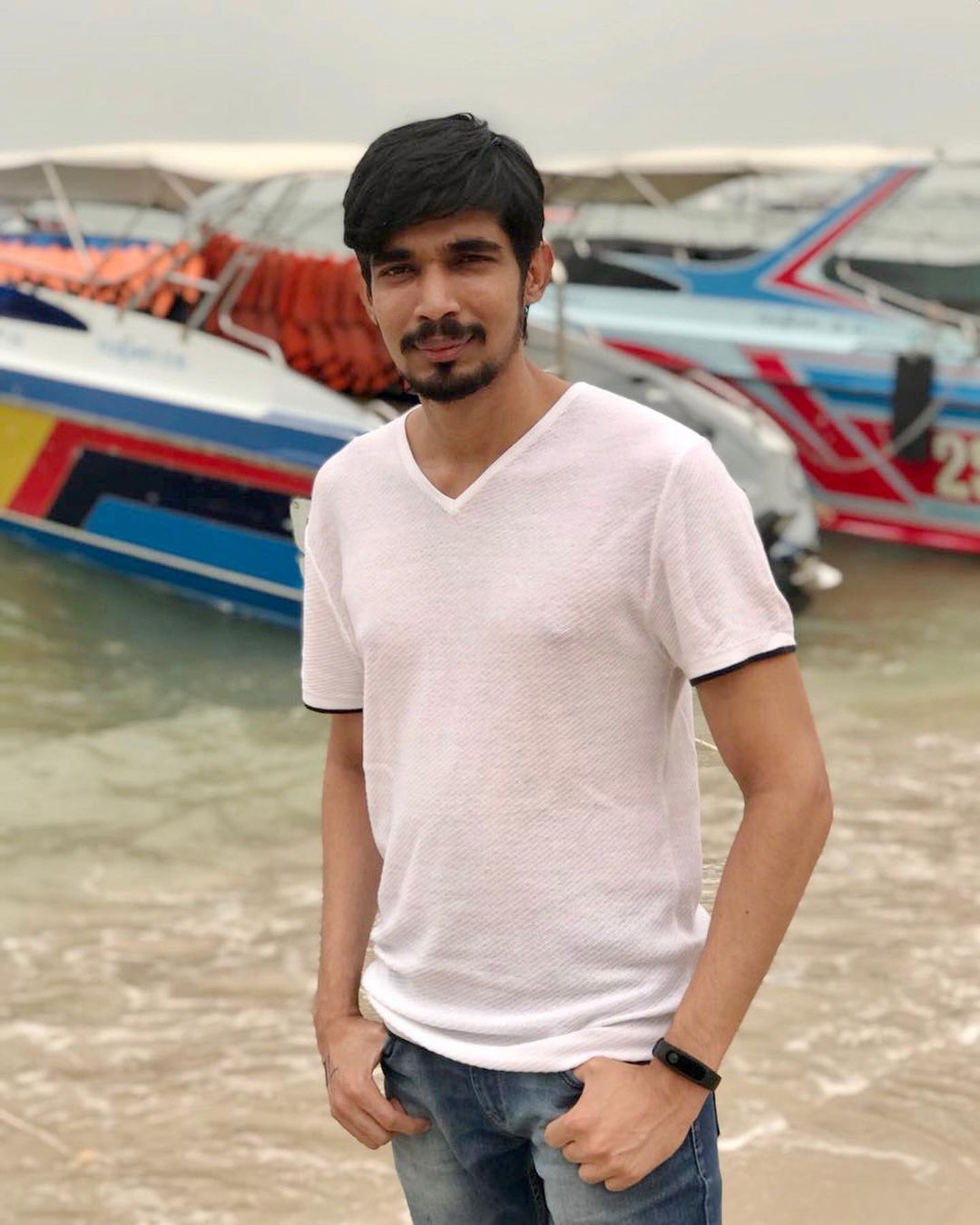 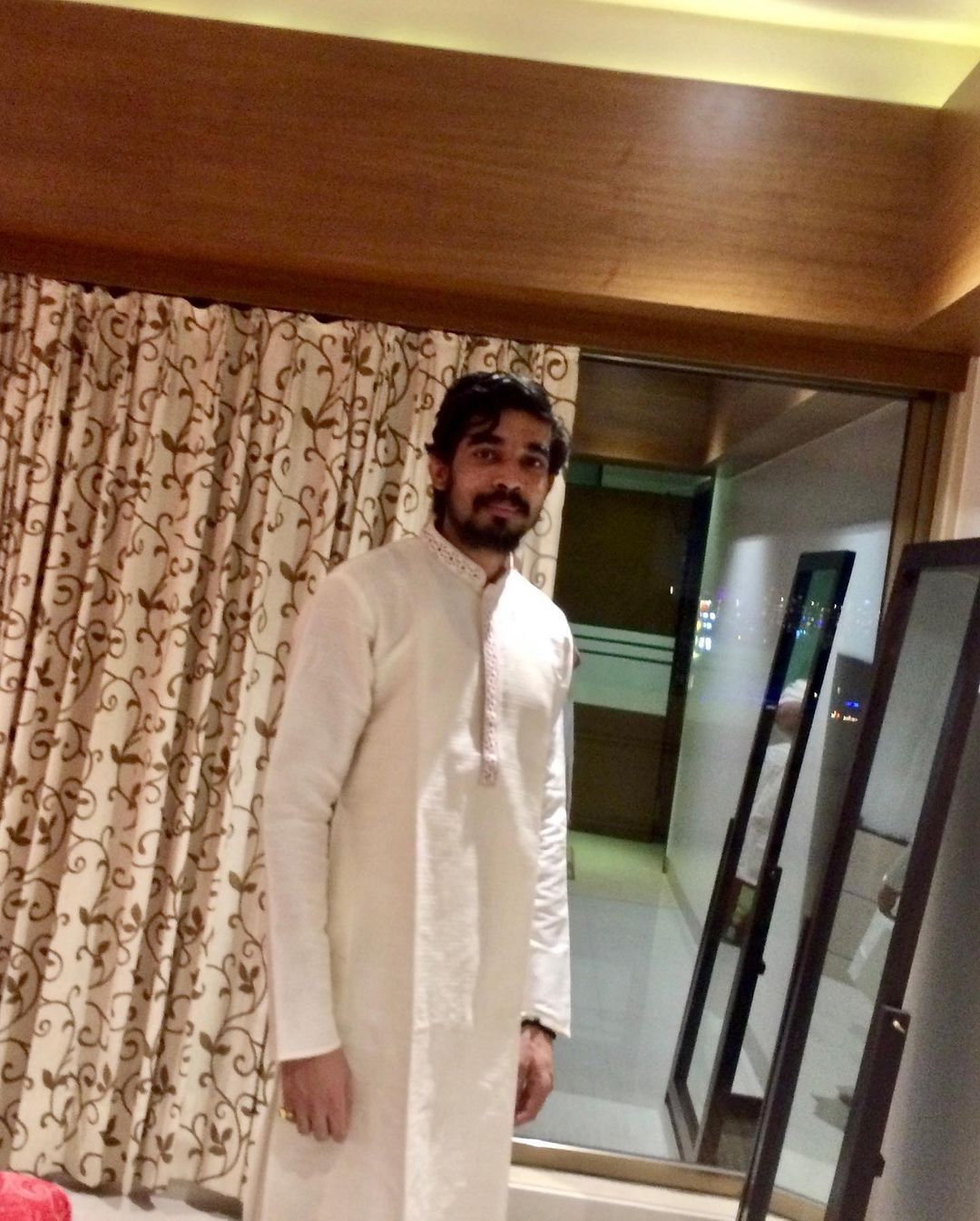 We hope that Jatin Tamboli finds peace in the other part of the world!

Nikki Tamboli Shares Emotional Post For Her Father, After He Lost His Mother And Son In Just 14 Days