Mouni Roy shared pictures in a stunning yellow chiffon saree from the collection of the ace designer, Neeta Lulla and paired it with a unique hairdo. Check out!!

Mouni Roy had gained popularity with her television stint in Naagin and its sequel, Naagin 2. She had made her debut in the Hindi film industry with Reema Kagti's sports drama, Gold, and has garnered a lot of appreciation for her performances. Coming to her personal life, she had tied the knot with her Dubai-based banker boyfriend, Suraj Nambiar, on January 27, 2022. Since then, she has been enjoying every moment of her marital life with her hubby to its fullest.

Mouni Roy is an avid social media user and keeps sharing snippets from her life. On February 10, 2022, the newly-wedded diva had taken to her IG handle and had dropped some sizzling pictures of herself from her honeymoon in Kashmir with her hubby, Suraj Nambiar. In the pictures, the new bride had looked drop-dead gorgeous as she had posed in a black monokini by the poolside. Mouni had exuded modern bahu vibes flaunting her shankha pola, and her bridal glow was unmissable! Along with the pictures, she had penned:

"If kisses were snowflakes i would send you a blizzard."

On February 28, 2022, Mouni Roy took to her Instagram handle and shared a stunning picture of herself in a bright yellow chiffon saree. She paired her saree with a matching coloured-strapped blouse with a plunging neckline. Mouni also opted for a cut-crease glam makeup that included her defined eyebrows, brown smokey eyes, mascara, nude lipstick, highlighted cheeks and a unique hairdo. Her hairdo made her look completely vivid, including neatly back-brushed hair, paired with braids adorned with multiple bands. She also accessorised her look with long brown coloured crystal earrings and rings. 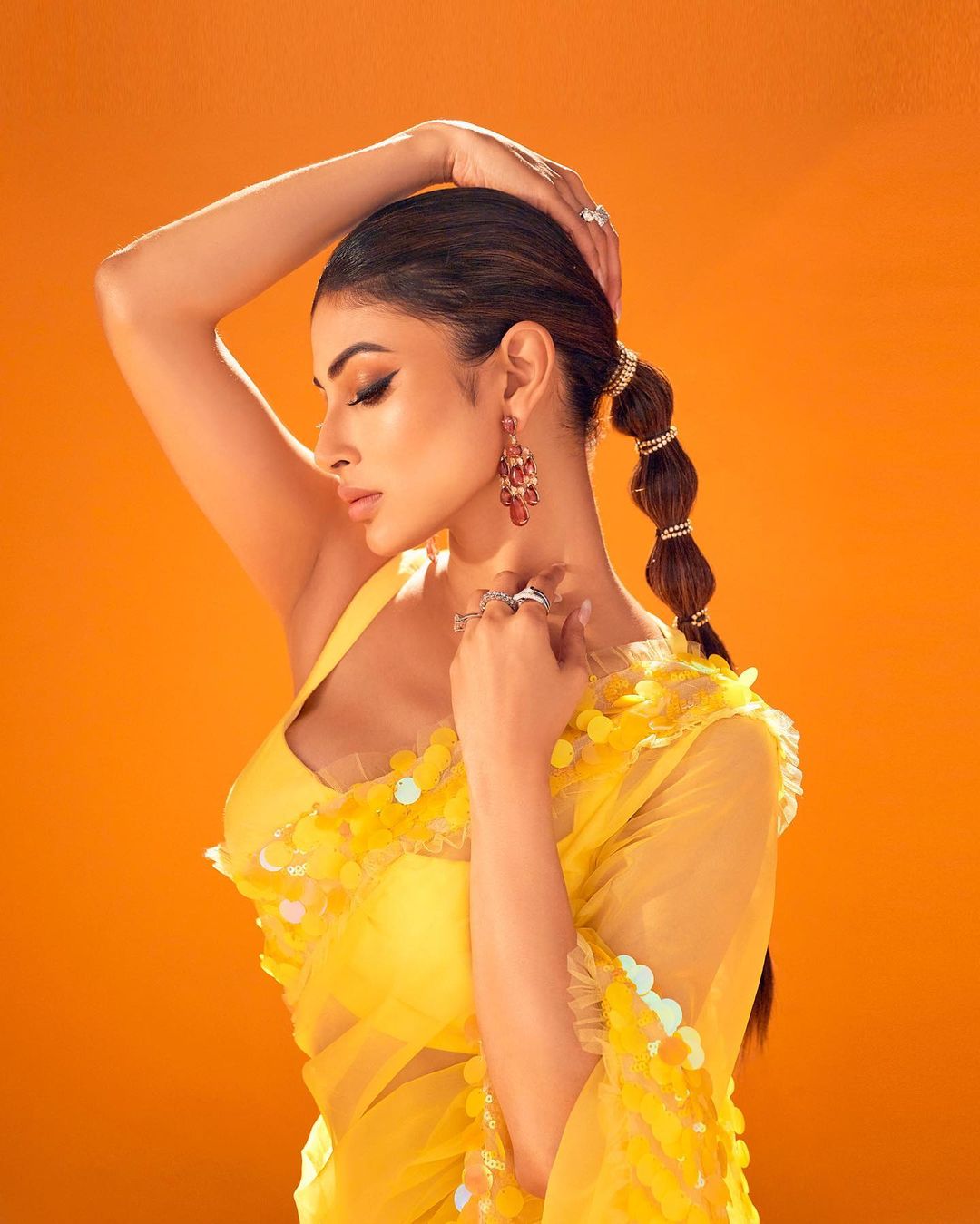 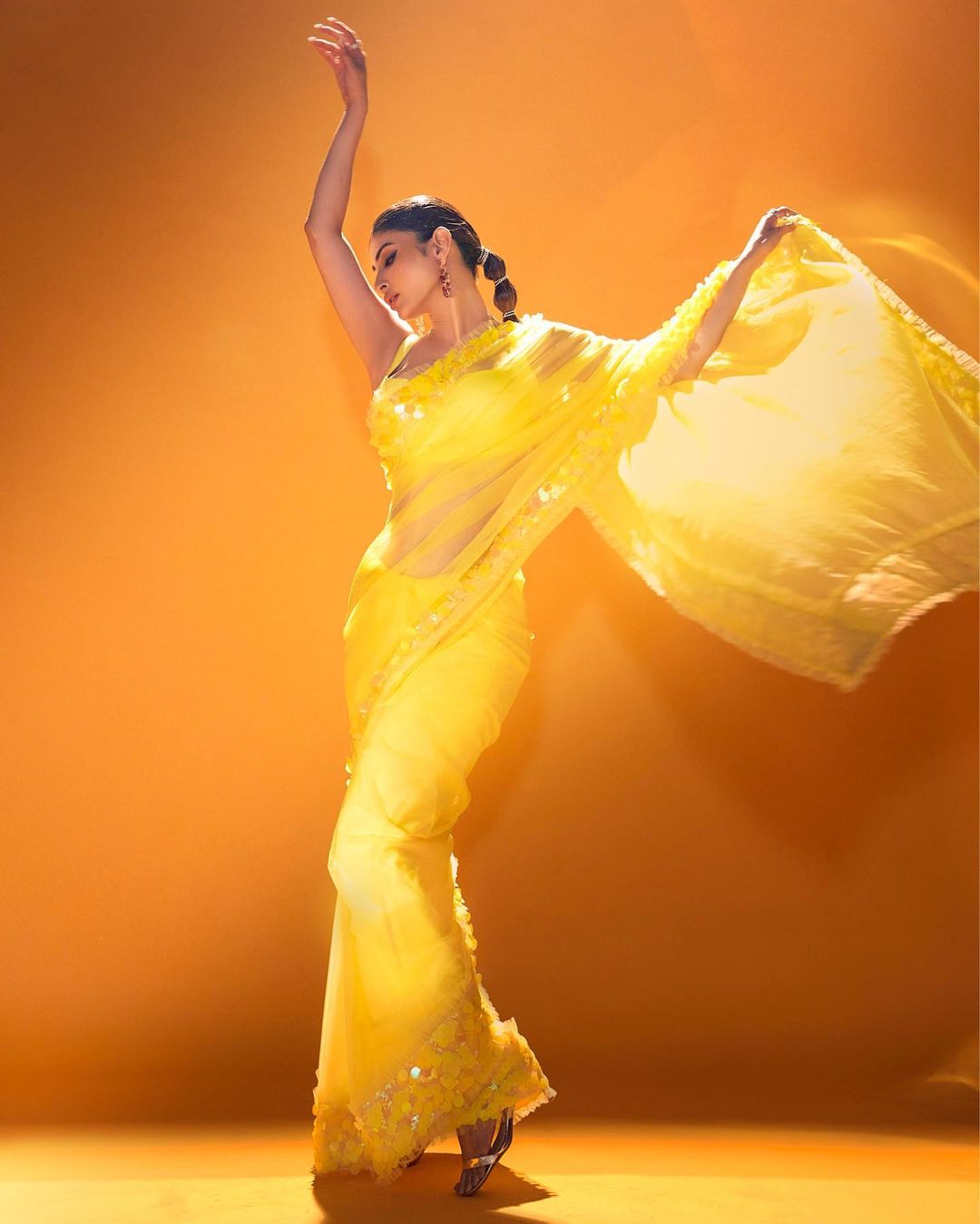 Mouni Roy's bright yellow chiffon saree adorned with ruffled edges and sequin borders is from Neeta Lulla's collection. It is named the Sunglow Mehr Saree Set and is available on the brand's official website. The price tag of her saree comes with a whopping amount of Rs. 84,000 and can easily be your next traditional look.

Next Read: Suhana Khan Dazzles In A Pristine White Lehenga By Manish Malhotra, Mom, Gauri Khan Is All Hearts 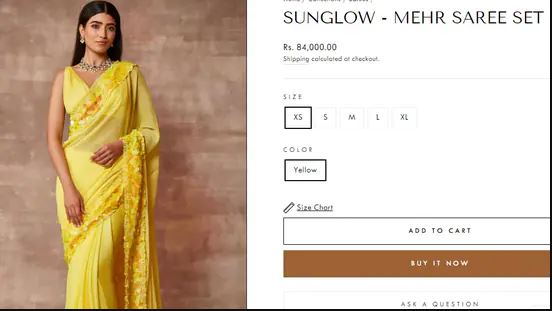 A few months back, Mouni Roy had taken to her IG handle to post a series of pictures. In the photos, the Gold actress was seen wearing an Organza and net bottle green lehenga. The blouse of the lehenga came with a plunging neckline. Mouni had tied her hair in two fish braids and had accessorised a necklace to amp up her look. Mouni had kept her makeup minimal and chose nude shades for the same. The actress had captioned the pictures as: 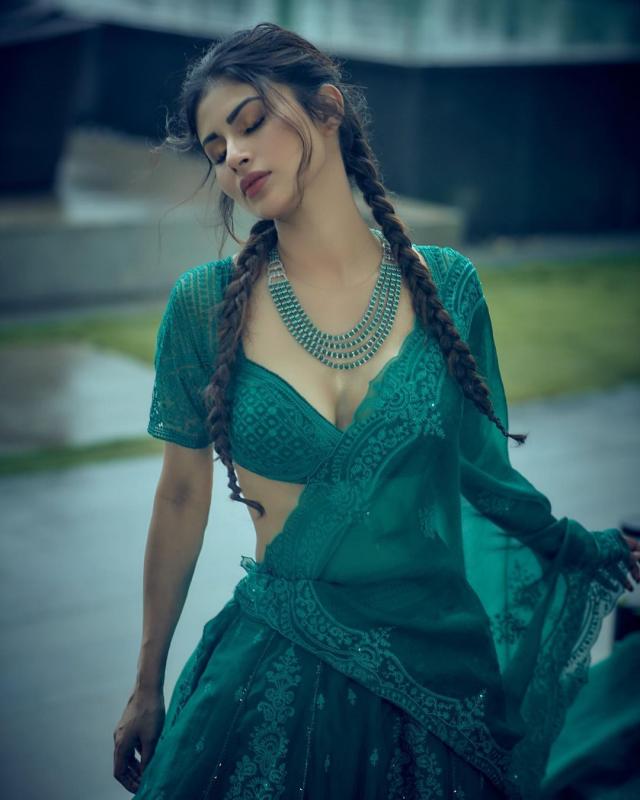 While the outfit had caught all our attention, the price of the lehenga is more shocking for a lot of us. Mouni had chosen her lehenga from a brand named Torani, and the ensemble is listed as SABZ MEHREEN PAASA LEHENGA SET on the official website of the brand. However, this piece is priced at Rs. 2,25,000. No wonder Mouni has done full justice to this pretty expensive piece.

Are you also tempted to have a stunning saree like Mouni?

Next Read: Alia Bhatt Shines In A Bright Blush Crystal And Sequence Saree Worth Rs. 98K 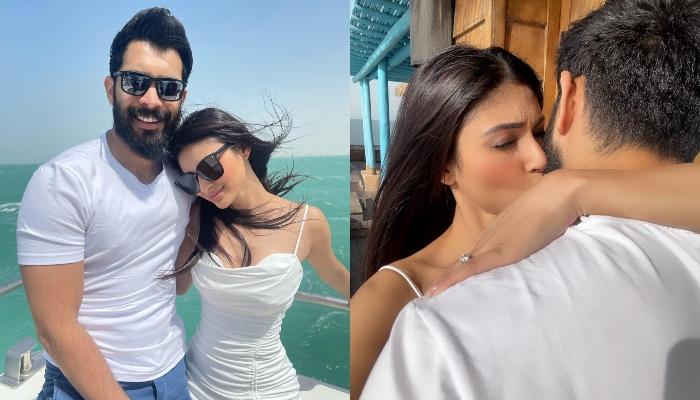 Popular actress, Mouni Roy is known for her stunning acting skills and sartorial fashion picks. For the unversed, the gorgeousness had tied the knot with her longtime boyfriend, Suraj Nambiar, on January 27, 2022. Since then, the madly-in-love couple has been enjoying their marital life to the fullest, and glimpses of the same