Bollywood actor, Shahid Kapoor and his wife, Mira Rajput has proven time and again how to shower love on your partner, even after so many years of marriage. For the unversed, Shahid and Mira had got married on July 7, 2015. The duo had embraced parenthood for the first time with their daughter, Misha Kapoor, on August 16, 2016. Later, on September 5, 2018, Misha had become an elder sister with the arrival of Shahid and Mira’s son, Zain Kapoor.

Time and again, Shahid Kapoor had stated that Mira Rajput has turned their house into a home. The family of four will soon shift to their new home, located in Worli, Mumbai. Their duplex, on the 42nd and 43rd floors of Tower B of Three Sixty West, costs a whopping amount of Rs. 55.60 crores. The loving parents often take to their respective handles and share glimpses of their adorable family.

A few hours ago, Mira Rajput took to her Instagram handle and shared a cosy mirror selfie. In the picture, Mira was seen kissing Shahid, however, his face was not revealed. Along with the love-filled picture, Mira wrote: While Mira pointed her camera to the mirror, Shahid’s back was only seen, carefully concealing the actual kiss in the photo. This picture raised curiosity in netizens as they flooded the comment section of Mira’s post. “Ye shahid bhai nhi lag rahe”, commented a fan while another added, “Shahid to nhi lagta”. Several users also reacted in the same way to Mira's post while another user commented, “Is that Shahid i don't think he is”.

On January 20, 2022, Mira had taken to her Instagram handle and had shared a mushy IG story. She had posted a photo of her television screen, on which Shahid's film was being played. Atop it, Mira had written, "Okay, Shahid. Movie night." To this, Shahid had given a cute reply. He had reposted the IG story and had written:

"Okay Mira, but this film is yet to release." On January 14, 2022, Mira Rajput Kapoor had taken to her IG handle and had dropped two pictures on her IG stories. Sharing the pictures, Mira had asked her fans to send suggestions for planning space allocation for her kitchen in her new home. Mira had shared that she wants a masala/tadka friendly kitchen and had also mentioned some of the organisational tips given to her by her friends. Atop one of the pictures, Mira had penned:

What do you think about Mira's kissing picture? Let us know.

Mira Rajput's Son, Zain Asks Her To Sit With Him While He Sleeps, The Mommy Enjoys Movie Night Later 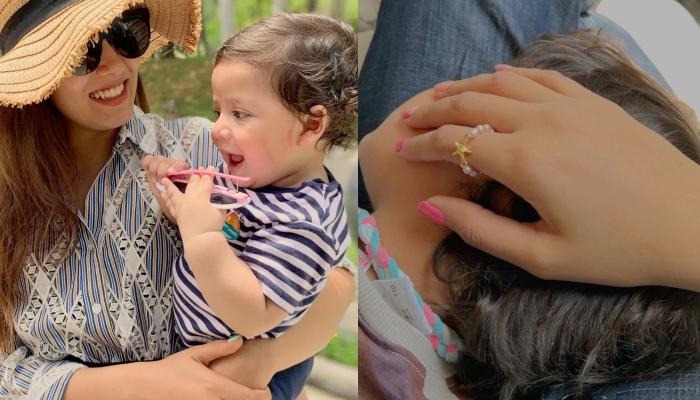 Being a mommy is no cakewalk. From fulfilling the kids' demands to handling their tantrums, the mommies have to go through it all to make their kids happy. However, sometimes, mothers have to sacrifice their own wishes to keep up with their kids' desires. And, Shahid Kapoor's wife, Mira Rajput