Often regarded as one of the greatest Kathak dancers ever, Pandit Birju Maharaj passed away at the age of 83. The iconic dancer breathed his last on January 17, 2022. Details inside!

The iconic Kathak dancer, Pandit Birju Maharaj, passed away on January 17, 2022, and the news has broken many hearts, leaving the entire nation numbed. The news of Birju Maharaj's death was confirmed by his grandson, Swaransh Mishra, in his painful social media post. According to reports, a few days before his demise, the legendary Kathak dancer was diagnosed with kidney disease and was put on dialysis by the doctors.

It is also reported that despite all the precautions and doctors' best efforts, a sudden drop in Pandit Birju Maharaj's health caused him a massive heart attack that resulted in his untimely death. The heartbreaking news not only made the Indian classical dance society numbed but even the B-town is saddened by the demise of a dancer who had always given his everything to the film industry. "With profound grief and sorrow we inform the sad and untimely demise of our most beloved member of the family, Pt. Birju Maharaj ji. The noble soul left for his heavenly abode on January 17 2022. Pray for the departed soul. Grief stricken: Maharaj family." Soon many Bollywood celebrities penned their heartfelt tributes to the departed soul. While some called him an unparalleled institution in the world of performing arts, some recalled incidents that speak about his greatness. From Adnan Sami, Ashoke Pandit, to Subhash Ghai, everyone hailed Pandit Birju Maharaj as one of the country's greats and talked about his unmatchable legacy. 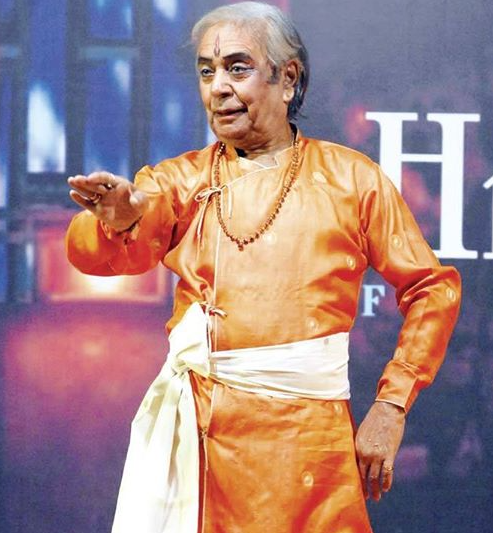 While Adnan Sami highlighted the fact that legendary Kathak dancer, Pandit Birju Maharaj has influenced generations, Subhash Ghai recalled his first learning from the Kathak legend, and Ashoke Pandit revealed that Birju Maharaj died due to a severe heart attack at the age of 83 in Delhi. Also, the country's honourable Prime Minister, Narendra Modi, mourned the demise of Padma Vibhushan awardee, Birju Maharaj and titled his demise as an 'irreparable loss'. Their respective tweets can be read as:

Don't Miss: Ranveer Singh And Deepika Padukone Trolled As They Returned From Vacation And Didn't Posed For Paps 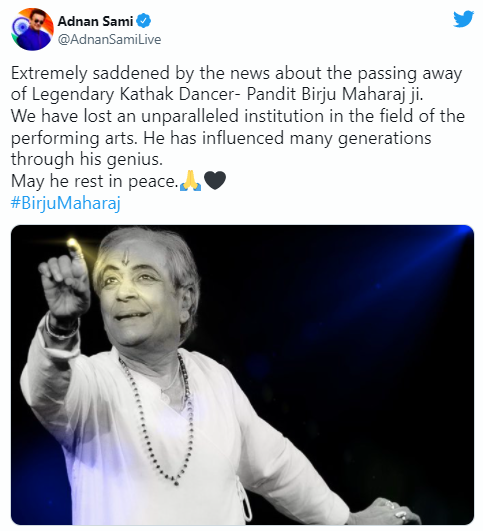 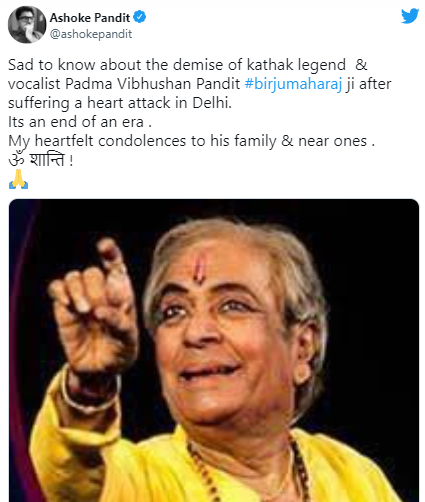 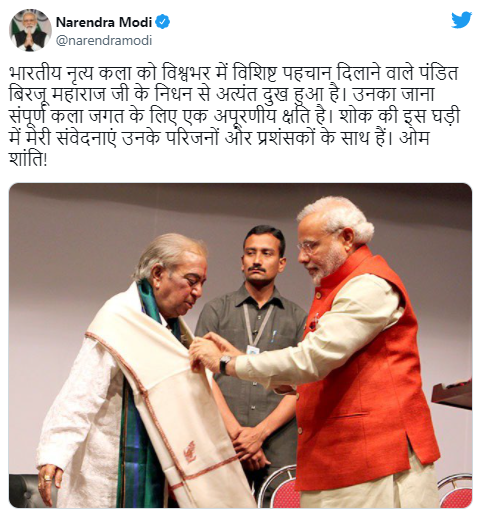 For the unversed, late Pandit Birju Maharaj was an exponent of the prestigious Kalka-Bindadin gharana of Kathak dance in Lucknow. The legendary dancer is also a descendant of the iconic dancers, late Lachhu Maharaj and late Shambhu Maharaj. Apart from his expertise in Kathak, Birju Maharaj had also practised Indian classical music and was also an exceptional vocalist. After his retirement in 1998, Birju Maharaj had opened his own dance school by the name 'Kalashram' in Delhi. He was also the recipient of prestigious awards like Bharat Muni Sammaan, Sangeet Natak Akademi Award, Rajiv Gandhi National Sadbhavana Award, National Film Award for Best Choreography, and Lata Mangeshkar Puraskar. Also Read: Anushka Sharma Recalls The Times When Virat Kohli Had Tears In His Eyes After A Loss, Pens A Note