It’s just a few days left for us to say adieu to 2016, and all of us are busy making New Year plans. Just like us, our favourite Bollywood and television celebs couples too are on New Year’s Eve mode. While some of them have already left for their vacation, others are going to leave shortly.

Excited to know where are your favourite celebrity couples Akshay-Twinkle, Karan-Bipasha, Divyanka-Vivek, Raj-Pooja, etc. are heading to? Well, for that just start scrolling and you will soon get to know!

Checkout: Hrithik And Sussanne Holidaying Together For The First Time After Their Divorce 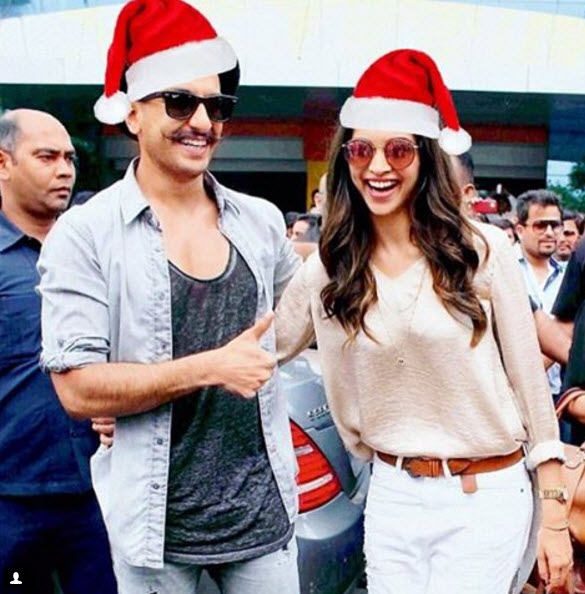 Deepika and Ranveer are one of the most loved and the hottest couples from B-town. DeepVeer (as their fans fondly call them) fans just can’t get enough of them. They are spotted together hand-in-hand at events, interviews and award functions. Love spark is quite evident between these two cuties. Well, as per the recent reports, the lovebirds have flown to Dubai and will celebrate the New Year together there. 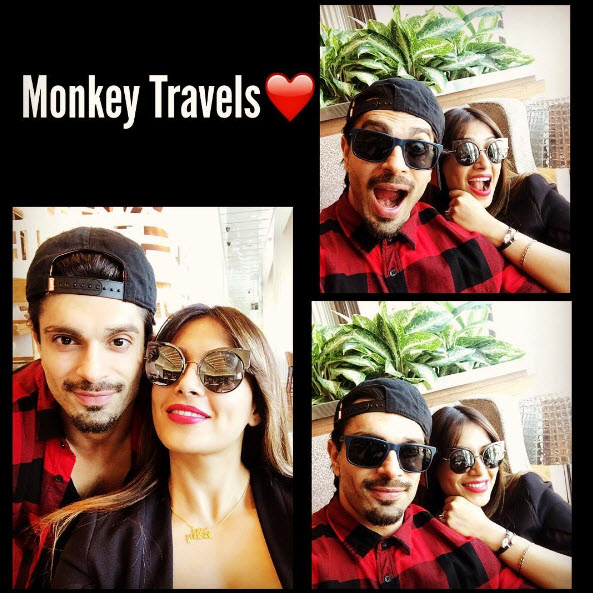 This ‘Monkey Couple’ of the town has been in news for quite some time now and for all the good reasons. Karan and Bipasha got hitched on April 30, 2016 after dating each other for a few months. There is no denying in the fact that Bipasha and Karan are surely enjoying their married life to the fullest. These lovebirds are on a travel mode and are enjoying their 'us' time in Australia where they will celebrate New Year's Eve as well. 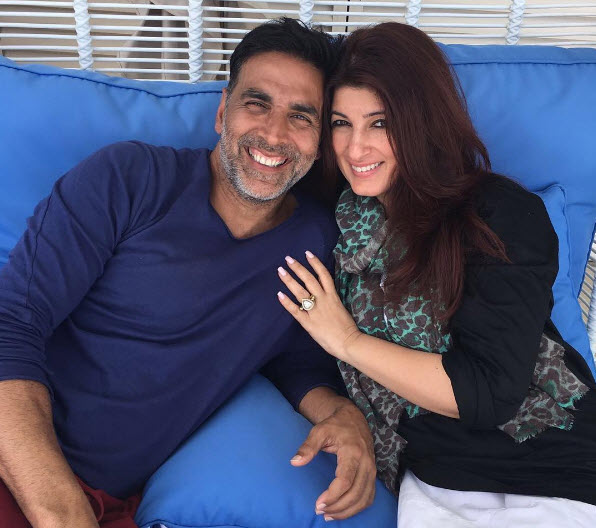 One of the most amazing B-town couples, Akshay Kumar and Twinkle Khanna will have a double blast this New Year’s Eve. Actually, it’s Twinkle’s birthday on December 29, 2016 and the two have planned to celebrate both in Cape Town, South Africa. Apparently, it’s going to be a long vacation along with Twinkle and Akshay’s munchkins.

Do Check Out: 7 Things That Prove Why Akshay Kumar And Twinkle Khanna Are The Power Couple Of Bollywood 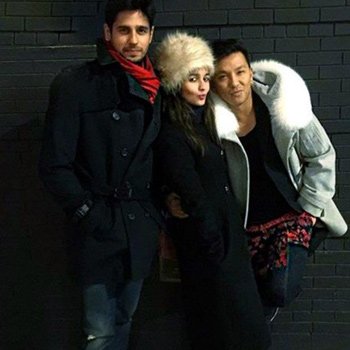 It’s been quite a long time that Alia Bhatt and Sidharth Malhotra's break-up rumours are doing the rounds. To kick those rumours aside, the duo has left for a secret vacation together to spend the New Year’s Eve. Though the place where they have gone has not been revealed, but they surely are having a gala time together. The picture above straight from their vacation is a digital proof! 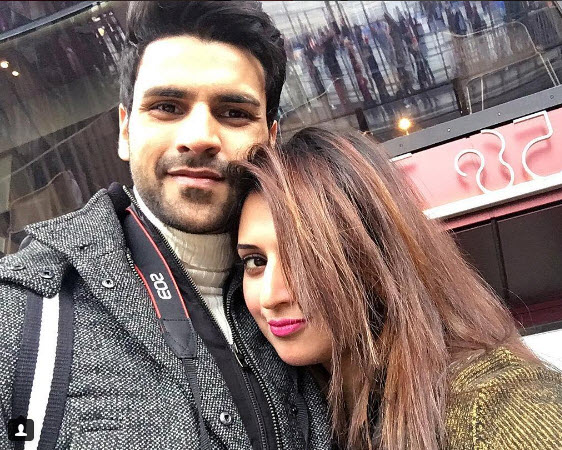 One of the most lovable cuties of the television world Divyanka Tripathi and Vivek Dahiya got married on July 8, 2016 after a long courtship period. Their wedding was in true sense a grand one, which trended on social media like crazy. Well, the lovebirds spent their Christmas in Paris. In addition to this, they will be exploring Europe while the year 2017 will ring in. Nagarjun fame actor Nikiten Dheer and Kasam fame actress, Kratika Sengar walked down the aisle together on September 3, 2014. This cutesy couple too is planning to celebrate New Year 2017 in a grand manner. Well, they will enjoy this New Year in Singapore and it will be a four-day holiday. Here’s what Nikitin said in a statement:

“Too much planning has to be done because we both are working and too many things at stake, so it’s not easy…I think it really feels nice when you get married to somebody who is in the same field and you get so many things to do if you have the same type of interests. Travelling is our common passion and we will have a blast.” 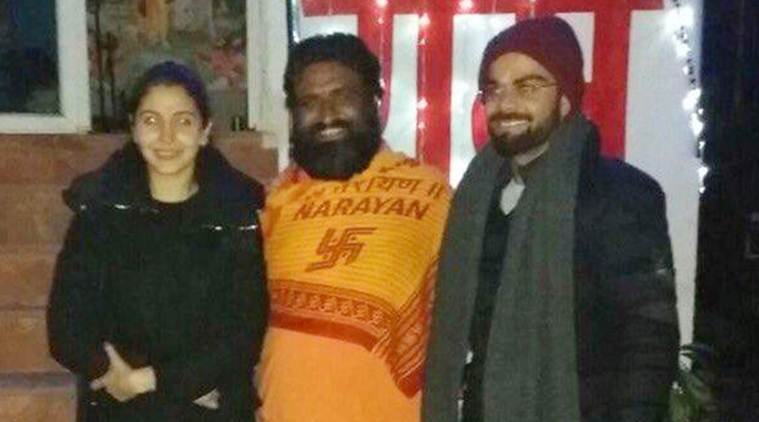 Virat Kohli and Anushka Sharma are one of those celeb couples, who have never accepted their relationship officially. But the way they have always been clicked together enjoying dinner dates and relishing each other’s company, the love between them is quite obvious. According to the latest reports, this adorable couple will welcome 2017 together in Uttrakhand. 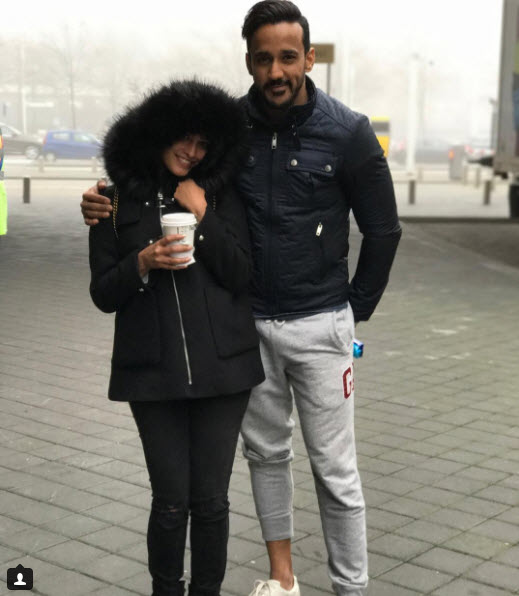 Ye Hai Mohabbatein fame actress, Anita Hassanandani and Rohit Reddy are counted amongst the hottest couples form telly land. These lovebirds tied the knot on October 14, 2013, which was a lavish destination wedding. Now when we are all excited to welcome 2017, this duo too is equally anxious and will celebrate New Year 2017 in Amsterdam.

WATCH Video: 'Yeh Hai Mohabbatein' Fame Anita Hassanandani Dances With Her Husband Like Nobody Is Watching Not just this, there are other celeb couples such as Rithvik-Asha and Karan-Ankita, who are holidaying together with them. Have a look at this groupfie above! 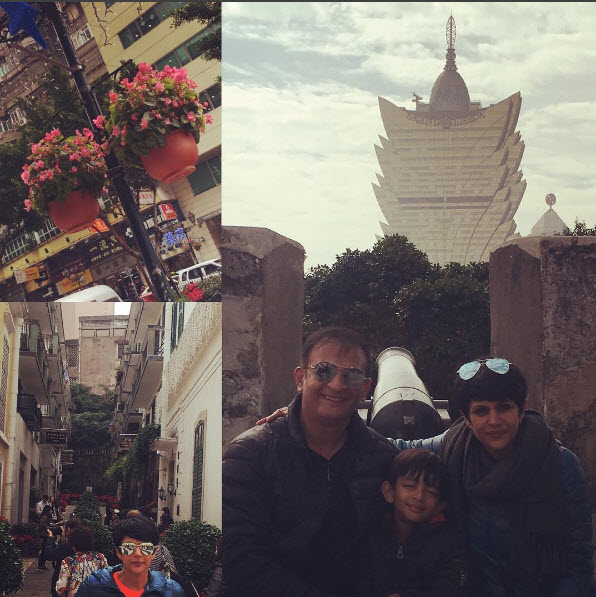 Famous actress Mandira Bedi took the wedding vows with Indian director-producer Raj Kaushal long back in the year 1999. This is one such couple from the glam world that has been going strong, giving some serious relationship goals to other couples out there. Well, this beautiful duo is enjoying these days in Macau along with their little bundle of joy, Vir Kaushal. They are even expected to celebrate the New Year’s Eve there itself. 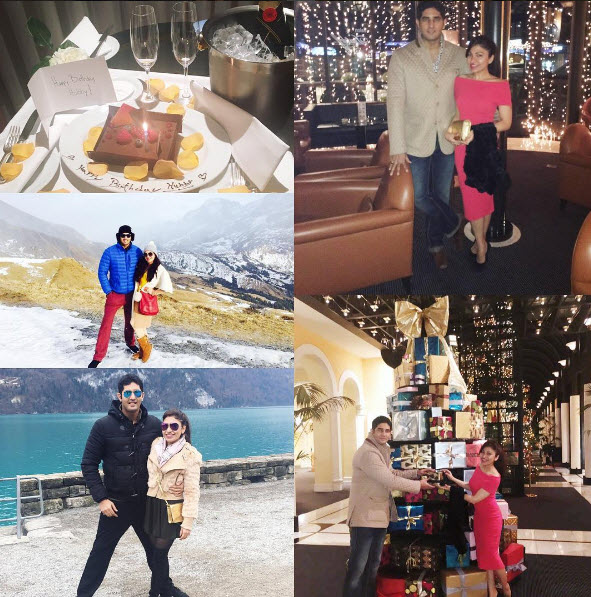 Singe, performer, voice over artist, entrepreneur and whatnot, Tulsi Kumar got hitched to non-industry guy, Hitesh Ralhan on February 22, 2015. Right from Mata Ki Chowki to their reception, every function was so grand that words fall short to describe this ‘Big Fat Wedding’. Hitesh and Tulsi are currently in Switzerland together enjoying their holidays and will probably welcome the coming year there.

Check Out: Choreographer Salman Yusuff Khan's Adorable Moments With His Son Will Fill Your Heart With Love 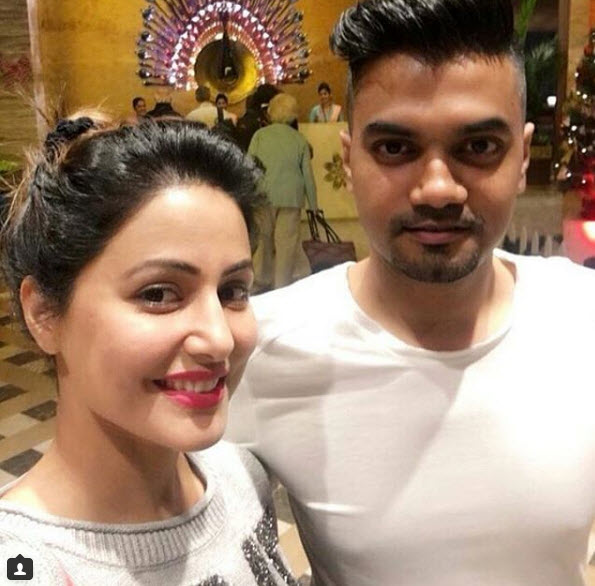 Well, it has been speculated for quite some time now that Yeh Rishta Kya Kehlata Hai fame actress is dating Jaywant (Rocky) Jaiswal, who happens to be the former producer of the same show. Earlier this beautiful actress was seen celebrating Diwali with her alleged beau, now she will also celebrate New Year 2017 with him in London. If reports are to be believed, the duo have planned a New Year event in London, where Hina could be seen performing for Rocky. 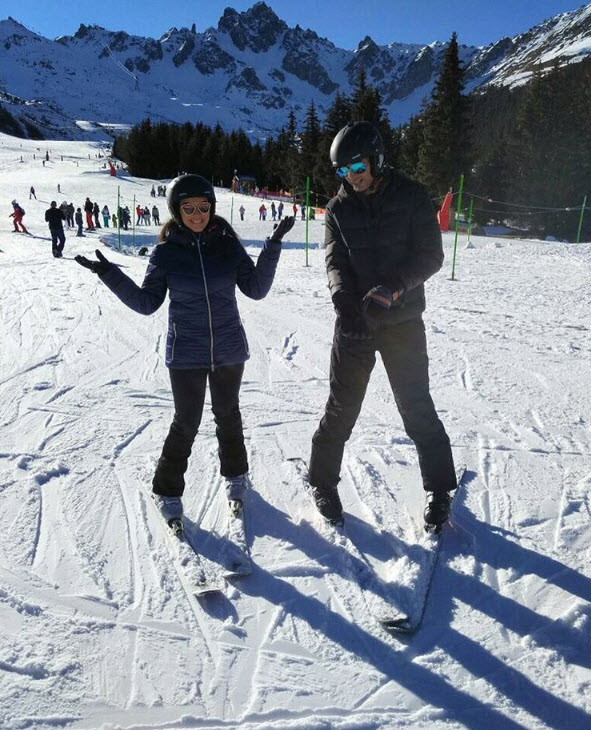 Famous B-town beauty Asin Thottumkal walked down the aisle with Micromax CEO Rahul Sharma on January 19, 2016. Their wedding was a twin private ceremony that was attended by a few close pals and family members. Now that the year 2017 is all set to arrive, these lovebirds are enjoying lovey-dovey time together in France and will celebrate this New Year’s Eve there. The lead actress Sriti Jha of Zee TV’s much-acknowledged show, Kumkum Bhagya has been dating Kunal Karan Kapoor for quite some time now. Though they have never ever committed or even talked about being in relationship with each other, but their close friendship is the proof of the same. And now the news is that the duo have flown to Bangkok along with other co-stars to welcome 2017. 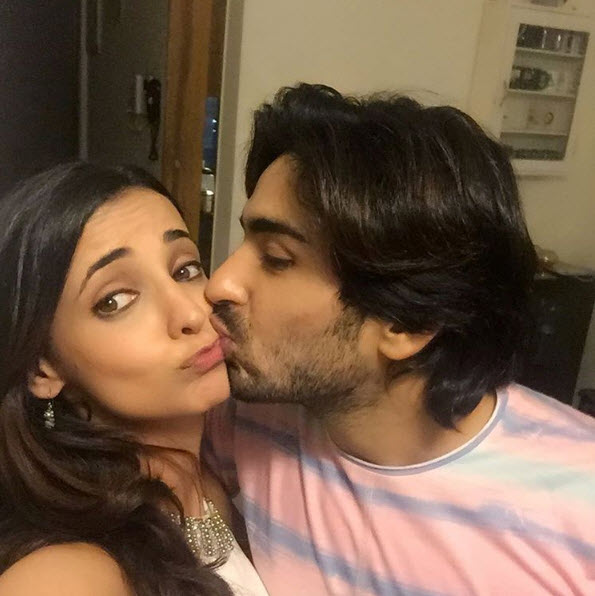 One of the cutest and the loveliest couples from telly world, Sanaya Irani and Mohit Sehgal took the wedding vows on January 25, 2016. Theirs was a grand destination wedding that took place at Planet Hollywood Hotel in Goa. Fell in love with each other while working together, this couple is enjoying the marital bliss to the fullest. Now to celebrate the New Year 2017 together, the duo have flown to Bali. 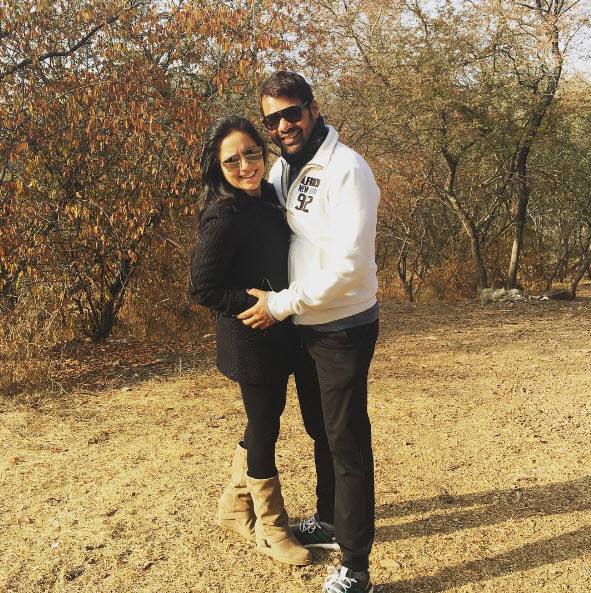 Kanchi Kaul and Shabbir Ahluwali, one of the lovelies from the telly land have been giving amazing relationship goals ever since they got married. They tied the knot in November 27, 2011 and are enjoying the marital bliss with two little munchkins, Azai and Ivarr. The couple is now enjoying their vaccay, where they will celebrate this New Year. 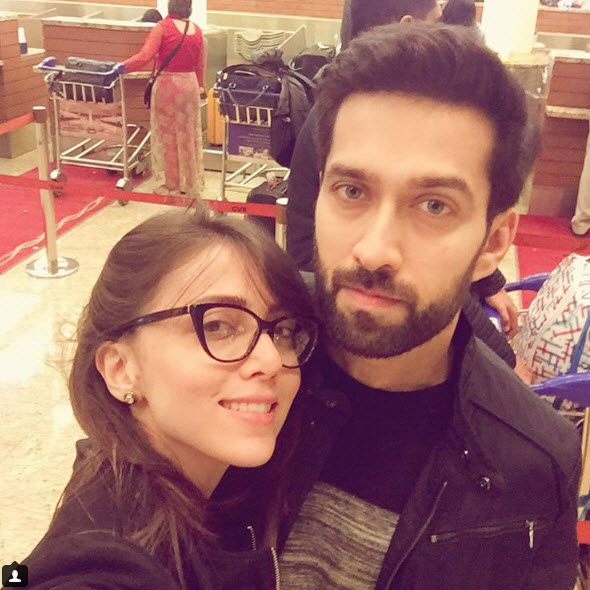 Pyaar Ka Dard Hai Meetha Meetha Pyaara Pyaara fame actor Nakul Mehta and his singer-wifey Jankee Parekh are named amongst the most lovable and the ‘happily ever after’ couple. After dating each other for over nine long years, Jankee and Nakul tied the knot in January 2012 in a complete traditional wedding. Just like aforementioned couples, Jankee and Nakul too have left the city and will welcome 2017 in London. 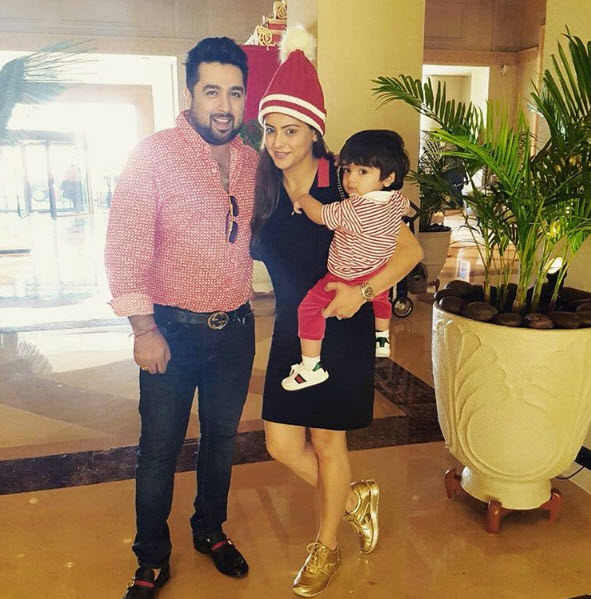 Kahiin To Hoga fame actress Aamna Sharif entered the nuptial with her long-time boyfriend Amit Kapoor on December 27, 2013, who is a prominent distributor-turned-producer. The lovebirds were blessed with a cute little baby boy Arain Kapoor, who is undoubtedly very cute and handsome. Well, coming to the point, this lovely family are enjoying their stay in Dubai and will celebrate this New Year’s Eve there itself.

Well, we just love all these celeb couples and we wish that they will enjoy their New Year happily together!