Esha Deol was on a family lunch date recently in Mumbai. Pictures from the same went viral on social media, and we can't help but admire Esha flaunting her baby bump like a pro.

On January 31, 2019, Esha Deol had taken to her official Instagram handle to share the sweetest piece of news of her pregnancy with her fans. By sharing a pic of her first baby, the super-adorable Radhya Takhtani sitting beside a cushion with words, “I’m being promoted to Big Sister” written atop it, Esha Deol had announced her second pregnancy. Since then, not only her Instagram handle pictures but her clicks from various events, prove how Esha flaunts her baby bump like a pro! (Must Read: Heavily Pregnant Sameera Reddy Is Enjoying Her Babymoon In Goa With Family, Pictures Inside)

Esha Deol has been married to her businessman beau, Bharat Takhtani since 2012, and on October 20, 2017, 5 years into their marital bliss, Esha and Bharat had embraced parenthood for the first time. And now, they are all set to experience the same happiness for the second time. Esha Deol, even though pregnant and is in her third trimester, is leaving no stone unturned to give all the expecting mothers major #pregnancygoals!

Esha Deol Flaunts Her Baby Bump In The Third Trimester, Beats The Heat Like A Pro (Pic Inside)

Esha Deol And Bharat Takhtani's Baby's Day Out With Daughter, Radhya, Her Pregnancy Glow Is Evident 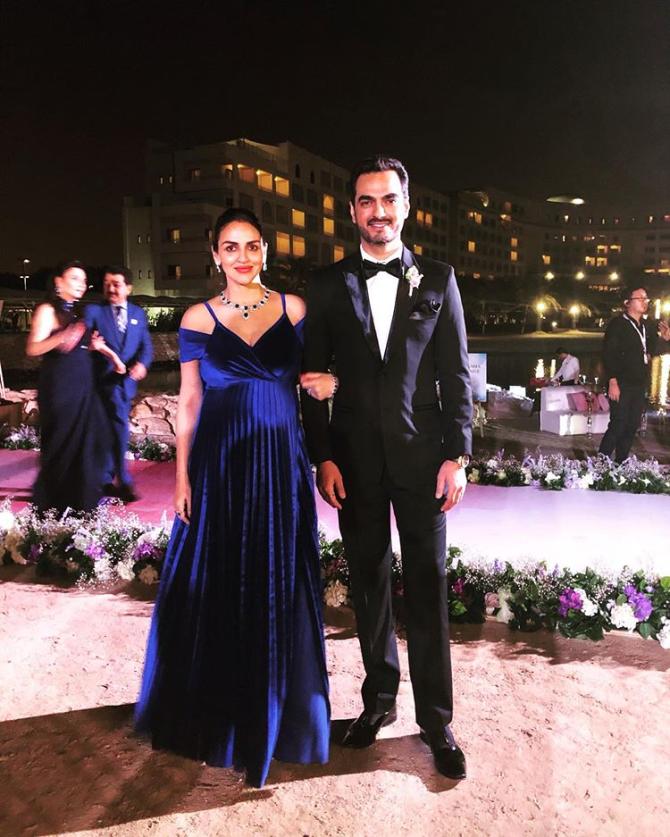 Esha Deol is truly raising the bar of pregnancy goals rather high. A few days ago, we had brought to you the story wherein we had noticed how Esha Deol nailed her pregnant summer looks during a photoshoot. Donning a floral printed shrug and denim shorts and lying down on a couch, Esha had captioned the photo as, “The heat is on & so is my #3rdtrimester #summervibes #sunday #mumbaiheat#pregnancyvibes #babybabybaby #gratitude.” (Don't Miss: Mahhi Vij Flaunts Her Baby Bump At Kanchi Kaul's Birthday Bash, Her Pregnancy Glow Radiates Royalty) 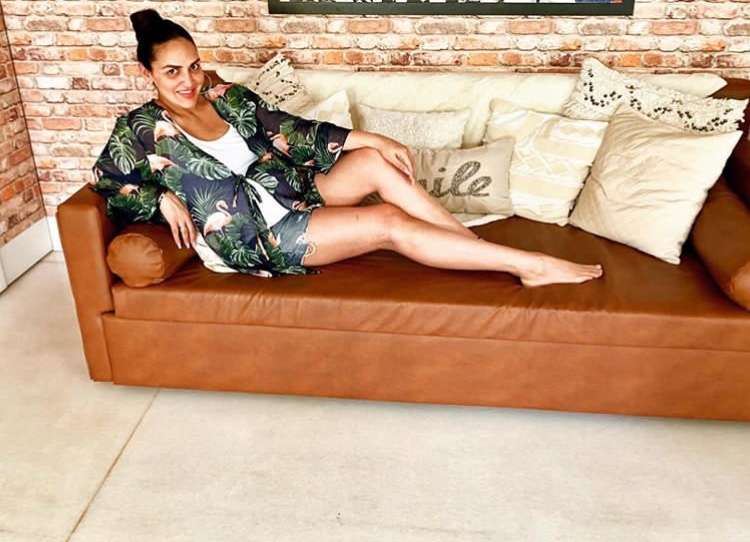 On the occasion of Mother’s Day on May 12, 2019, Esha Deol had flaunted her baby bump with baby Radhya by her side. The doting mommy-daughter duo twinned in black and white tees, with Esha’s tee carrying the words, “Mama bear” and Radhya’s tee carrying the words, “Baby bear.” Esha Deol had captioned the picture as, “My baby Radhya I love being your “Amma. ”#radhyatakhtani #lastyearonthisday #mothersday #throwbackpic #gratitude. Happy Mother’s Day to my mamma & mom @dreamgirlhemamalini, @pujatakhtani and all the mommies.” Esha Deol’s baby shower was organised by her loving husband, Bharat Takhtani recently on May 06, 2019. Esha had donned a pink maxi dress and sharing the following pics from her baby shower, she had captioned her post as, “It’s that time of the year again... #mybabyshower #part2 a big thank u to my dearest #love @bharattakhtani3 #radhyatakhtani , my darling #sister @a_tribe & #mysisterinlaw @asthajagwani & #mybestbuddy @chefchinuvaze ( who did all the theme created food which was yummy) for this awesome #surprisebabyshower #bigthanks to all my #friendsandfamily for making it to our #enchantedforest #babyshower by @partyplanetindia #gratitude.”

In an interview with The Times Of India, Esha Deol had shared how her life has changed post embracing motherhood. She was quoted as saying, “It has definitely matured me up in a big way. Having your own child makes you grow up overnight. This is the first time I am experiencing unconditional love in the purest form. I thank God every day for giving this beautiful little child who calls me maa and when she says my name, my heart just melts.” 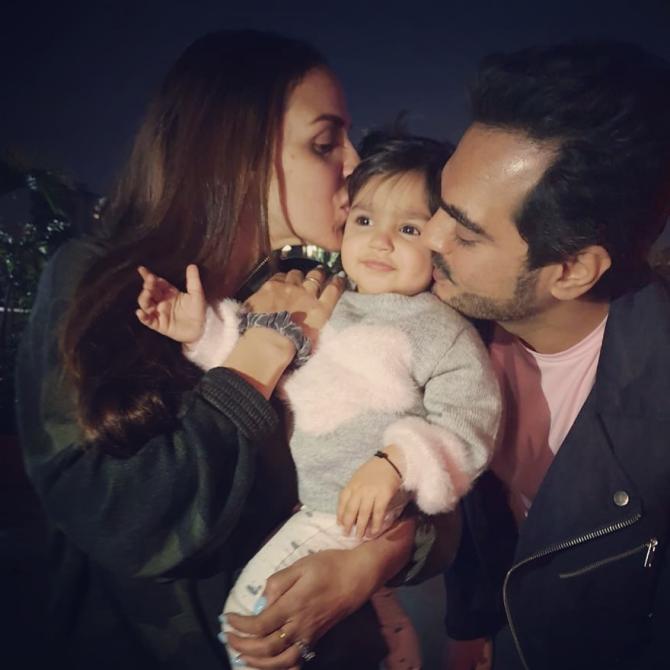 Esha Deol has transitioned from being ‘one’ to ‘almost four’ in the past few years. With managing her family and two back to back pregnancies, we have missed Esha on the silver screens and on the stage as well, as she is a dancer. Commenting on her future plans of acting and dancing, the 37-year-old actress had recently shared, “See, I have been acting all my life since the age of 18 and my dance, both of them go hand in hand for me. Both are equally important to me. I love facing the camera. I love playing challenging roles, especially now women are getting amazing characters to play.” She had further added, “So, I would love to play good roles and that can be the full length as well. At the same time dance for me is something special. I have seen how it has helped my mother over the years. Family life is great, but you also have to maintain your identity. So, I would love to get to back to my first loves acting and dancing.” (Suggested Read: Prabal Gurung Comments On Reports Of Romance With Karan Johar, Pens Down A Note On Twitter) 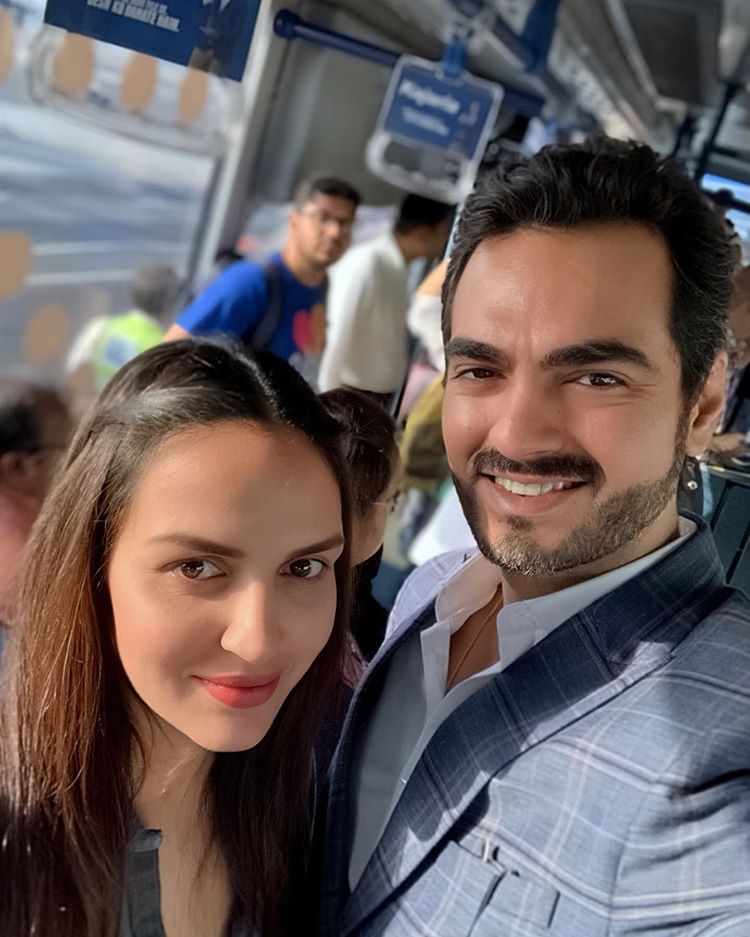 Esha Deol Flaunts Her Baby Bump In The Third Trimester, Beats The Heat Like A Pro (Pic Inside)

Esha Deol And Bharat Takhtani's Baby's Day Out With Daughter, Radhya, Her Pregnancy Glow Is Evident