Mommy-to-be, Anushka Sharma has been sharing snippets of her pregnancy journey, but this time she shared a candid picture of her hubby, Virat Kohli washing his shoes with a toothbrush. Check it out!

In this big-big world, we meet someone at the most unexpected time and they become the reason behind our wide smile. They give us many reasons to be happy and they start becoming a major part of our small world. When we finally meet our 'mister right' or 'miss right' our lives change forever, in the best way possible. They help us combat our fears and turn us into an amazing person. And a perfect example of it is Indian cricketer, Virat Kohli and his actress-wife, Anushka Sharma. The duo had often shared that they have became a lot better person after meeting each other. (Recommend Read: Dimpy Ganguly Can't Hold Her Happiness As Aryaan Begins Crawling, Shares Glimpses Of Her Munchkin)

On August 27, 2020, Virat Kohli and Anushka Sharma had given a sweet surprise to their fans, when they had announced their pregnancy news. The duo had shared a beautiful picture, wherein Anushka was seen wearing a black polka-dot dress and had flaunted her cute baby bump. In the picture, we could also see Virat, who was posing with her. The duo had captioned the pictures "And then, we were three! Arriving Jan 2021." Since then, Anushka has been sharing glimpses of her pregnancy journey on her Instagram handle. However, this time, the actress shared a sweet snippet of her dedicated 'mister', who was seen cleaning his shoes. On November 10, 2020, Anushka took to her IG stories and posted a candid click of her hubby, Virat, wherein he was seen washing off his spikes with a toothbrush, just before the tour. Atop it, Anushka wrote, "Caught the husband diligently cleaning his muddy spikes before the tour." Check it out below: 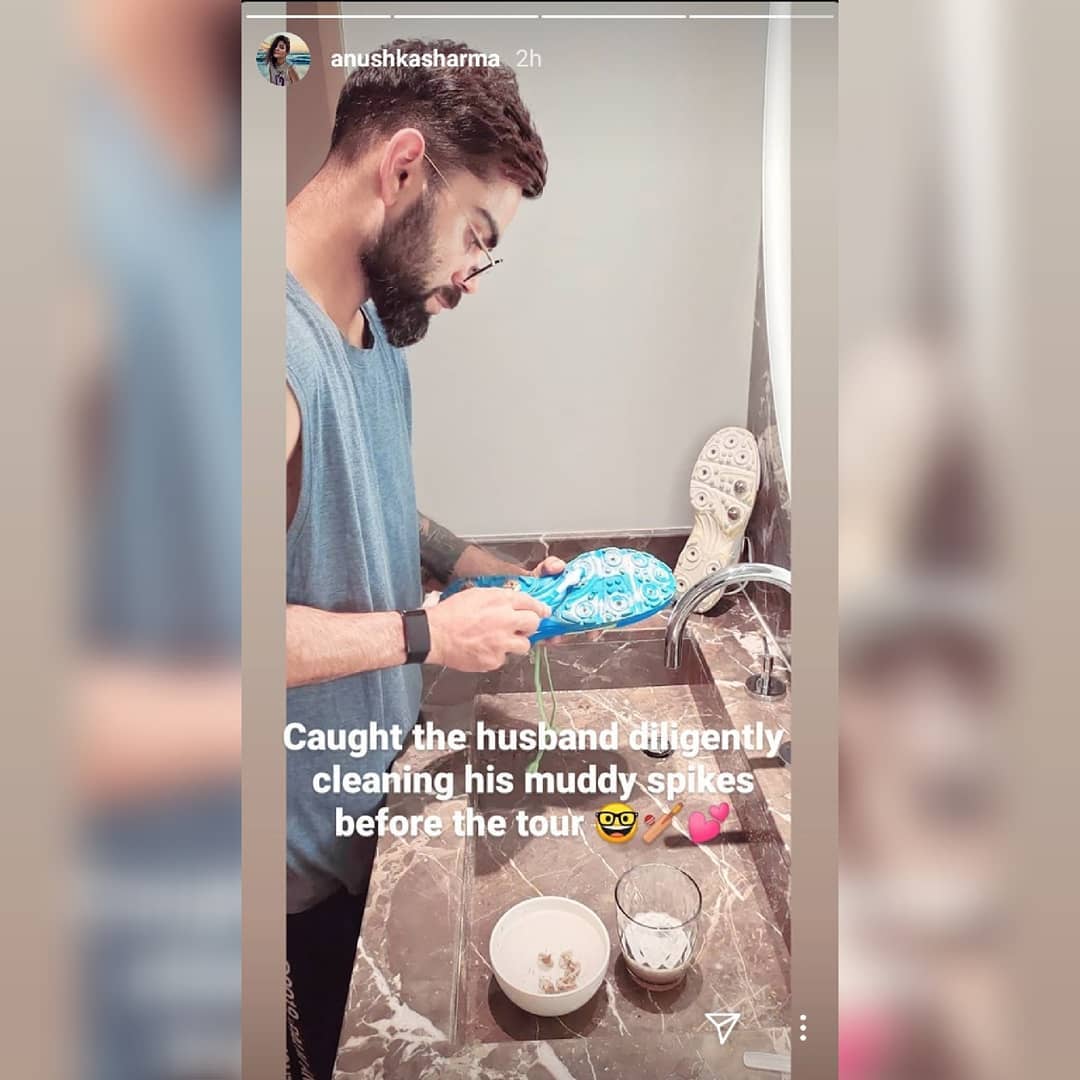 A couple of weeks ago, we had spotted a caring side of Virat during one of his IPL matches. In the video that was trending on the internet, we could see Virat asking Anushka whether she had food by doing a hand gesture from the cricket ground. To which, Anushka had blushed and had given a thumbs up. (Also Read: Prithviraj Sukumaran Warns His Fans About His Daughter Alankrita's Fake Account, Calls It 'Shameful')

On October 10, 2020, we had spotted the gorgeous mommy-to-be, Anushka cheering for her darling hubby, Virat during the Royal Challengers Bangalore vs Chennai Super Kings IPL 2020 match. When Virat had scored an unbeaten 90 in the match, Anushka had shown off her proud wifey smile and had showered flying kisses on her hubby. On September 21, 2020, the soon-to-be-mommy, Anushka had shared a gorgeous picture in a monokini and had flaunted her baby bump. The actress could be seen taking a dip in the pool. However, it was her pregnancy glow and her cute baby bump that had made the picture special. Alongside the picture, Anushka had written, "Acknowledging the good that you already have in your life is the foundation for all abundance" - Eckhart Tolle. Gratitude to all those who showed me kindness and made me believe in goodness in this world , opening my heart enough to practice the same with the hope to pay it forward. Because ... " After all , we are all just walking each other home " - Ram Dass." (Don't Miss: Amrita Rao's Husband, RJ Anmol Reveals That His Mom Wanted Him To Marry 'Poonam' From 'Vivah') Well, we love Anushka's candid click of her husband, Virat!

In a 'Q/A' session hosted by Anushka Sharma on her Instagram handle, she answered a lot of funny and interesting questions about love, life, relationships and her husband, Virat Kohli. She even addressed the question which is on everyone's mind right now! The question of her and Virat having kids. Scroll