Anushka Sharma is all set to embark the new phase of her life, i.e., parenthood and received a gorgeous intricate gift from her designer best friend, Sabyasachi Mukherjee. Picture inside!

How great it feels when we receive some unexpected gifts and it becomes extra special when it is for something we are eagerly waiting for! Anushka Sharma has received a special gift from the person, who dolled her up for her wedding. Yes, Anushka Sharma got a special gift from her designer friend, Sabyasachi, who had made her a trendsetter with her gorgeous wedding lehenga. Sabyasachi was the one, who had helped Anushka embark the new phase of her life, i.e., marital phase and now, as Anushka is ready to enter the parental phase of her life, Sabyasachi has again blessed her with his skills. (Recommended Read: Alia Bhatt Wishes Beau, Ranbir Kapoor's Cousin, Arman Jain On His Birthday With A Beautiful Picture)

Anushka Sharma and Virat Kohli had ‘promised each other to be bound in love forever’ on December 11, 2017, after all the speculations. They have given us the perfect example of being grounded, and honest, despite having such a huge fan following. After 3 years of happy married life, giving us major goals, Anushka and Virat are all set to be parents. The couple had announced the news of their pregnancy by sharing the first picture, wherein the actress was seen flaunting her cute baby bump. Revealing that junior Sharma-Kohli will arrive in 2021, Anushka and Virat had captioned it as “And then, we were three! Arriving Jan 2021.” Now, the couple has got a gorgeous gift from their favourite designer, Sabyasachi Mukherjee. 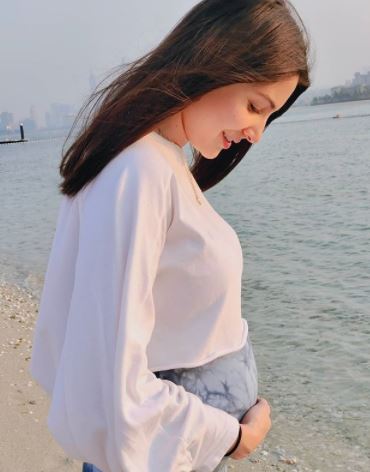 Anushka has been blessing her fans with her pregnancy details. From on-set pictures to her pregnancy cravings, Anushka is enjoying her pregnancy phase and updating her fans about little things. Now, Anushka has shared a congratulatory gift, she has received from her designer friend, Sabyasachi Mukherjee. Taking to her IG stories, Anushka shared a picture of the congratulatory note and some intricate designer jewels, sent to her by ‘maestro’ Sabyasachi. Anushka got antique intricate jewels from Sabya with her and her hubby, Virat’s initials attached to it. We are totally in awe of the designer gift she received from her friend, Sabya! Take a look: 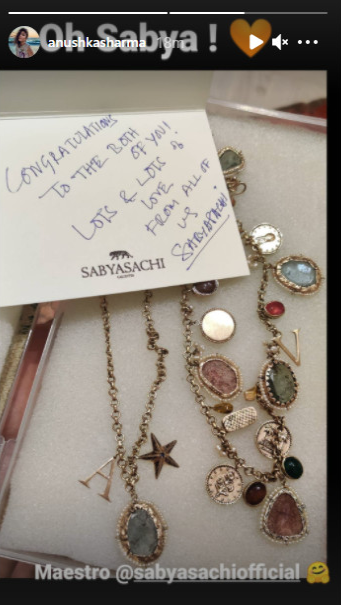 The mommy-to-be was in Dubai with her hubby, Virat during the IPL 2020 session, and is now, back in town. Anushka has resumed shooting and is often spotted in the city, outside her vanity van or getting ready for the shot. On November 25, 2020, we had stumbled upon a mesmerising picture of Anushka Sharma in a yellow mini dress with bottle sleeves and tassels hanging at the neck. She had paired her OOTD with hoop earrings, white sneakers and her signature smile, as she was captured stepping out of her vanity van. Her pregnancy glow was unmissable in the picture. (Don't Miss: Sania Mirza Pens A Powerful Letter On Making A Comeback In Tennis After Embracing Motherhood) On November 23, 2020, Anushka Sharma had perfectly depicted the 'Monday blues' by posting a picture on her IG handle. She had simply captioned it as "Hey." The mommy-to-be had donned a neutral-toned bodycon dress that had shown off her baby bump and had paired it with an oversized tee in a matching hue. Anushka's look was accentuated with makeup and wavy textured hair. Her baby bump was adorably visible as she had posed with a straight face for the camera. Other than this, Anushka was spotted flaunting her baby bump a few days ago, in a military green oversized jacket, and her look was completed with a pair of black wayfarers, white sneakers and a white mask. 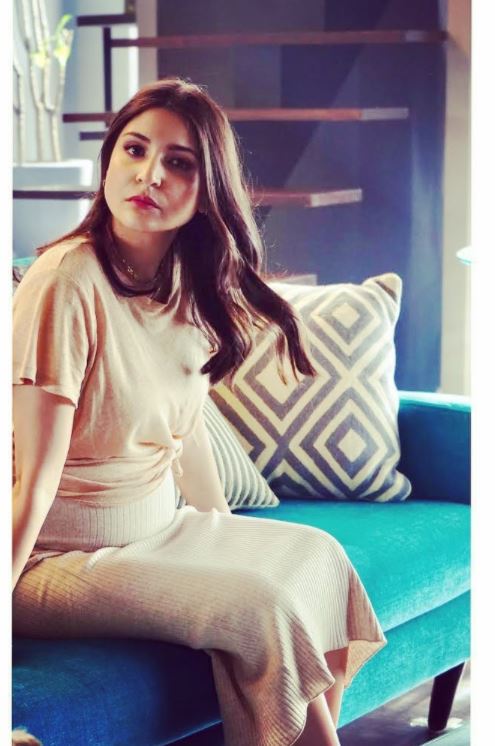 In an interview to RCB Bold Diaries, on the YouTube channel of the IPL team he represents, Royal Challengers Bangalore, Virat Kohli had revealed his and Anushka Sharma's reaction when they had found out about her pregnancy and his feelings on becoming a father. Virat had expressed, "It is an incredible feeling. It puts things into perspective for you. It is a beautiful feeling. It is difficult to describe how you feel, but when we found it, we were over the moon. When we announced, the kind of love that was showered on us it was amazing. People were genuinely so emotional and happy for us. We are looking forward to the third member joining the clan." (Recommended Read: Genelia Deshmukh and Riteish Deshmukh Post Adorable Videos On Their Elder Son, Riaan's Birthday) 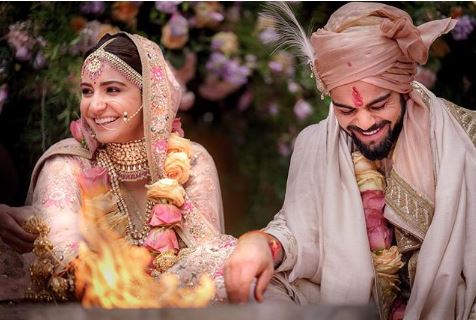 Did you like the congratulatory gift received by Anushka Sharma?