Amitabh Bachchan shared a series of pictures from one of his homes on his social media handles and they are every bit royal!

Bollywood's Shehanshah, Amitabh Bachchan is tirelessly working even at the age of 79. His legacy can never be matched in the industry for all that he has done for Indian cinema. Not only he is exceptionally good with his acting prowess but is also famous for his humbleness and friendliness. With more than 50 years in Bollywood, Amitabh’s hard work is seen in the properties he owns across the globe.

From Jalsa, Janak Palace, Prateeksha, Vatsa and an unnamed property behind Jalsa in India to a mansion in Dubai, and an apartment in Paris, Amitabh Bachchan has many properties under his name. This time, the veteran actor got his fans inside his Janak Palace, the property made for his official meetings and work. A few hours back, on his blog, Amitabh Bachchan shared some inside pictures from his personal recording studio at his bungalow, Janak. As the legend is in no mood to slow down, he shared that he was at his studio to dub some audios for his friend. In the blog post, he also revealed the name of his studio to be ‘Saptaswar’ and the meaning of this name. His blog can be read as:

“In the early morning there be an attempt to set out to work .. albeit in controlled environ of ‘saptaswar’ .. to dub to recite to give voice to film of known friend from neighbouring state. Saptaswar : sapt - 7 ; swar - notes of music .. the place for the 7 notes of music .. the environ of the recording studio in Janak .. a small little square which accommodates barely , two and a half persons .. a requiem for peace and calm and in the creative inspire .. at times.” 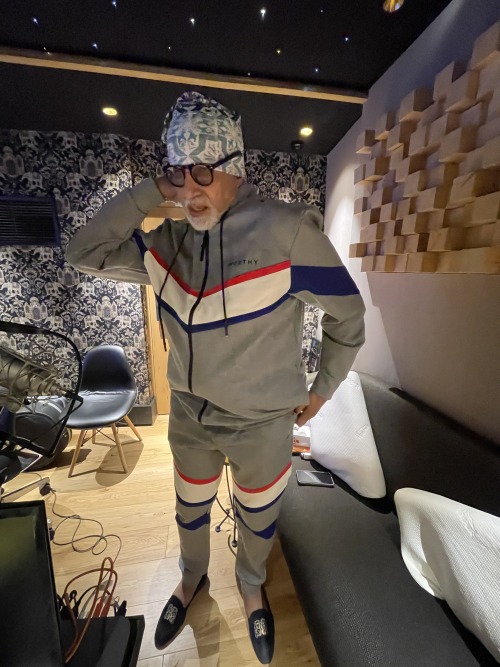 Amitabh Bachchan also shared a picture of the courtyard of one of his bungalows. In the picture, one can see an ancient-looking door carved with intricate detailing in stone, doubling up as a wall. In front of the door, a Buddha statue is placed. The area is further decorated with a bonsai, an orchid and other plants. Sharing the picture, Amitabh Bachchan wrote in a mix of Hindi and English:

Recommended Read: Anushka Sharma Recalls The Times When Virat Kohli Had Tears In His Eyes After A Loss, Pens A Note Talking about Amitabh Bachchan's luxurious property, Janak, it is within walking distance from his residence, Jalsa, and is separated from JVPD's Road No. 11. The veteran actor treats Janak as the place for most of his official meetings and work. Not only this, Big B also visits his elite property to use its gym and also loves listening to music and playing the piano in his own sweet private space. As per multiple reports in media, Janak is more like a personal space for Big B, which he uses quite often and the fact that it is pretty close to his residence, Jalsa makes it highly comfortable for him. On the work front, Amitabh Bachchan was last seen in the show, Kaun Banega Crorepati 13.

Next Read: Ranveer Singh And Deepika Padukone Trolled As They Returned From Vacation And Didn't Posed For Paps