Bollywood's most adored and respected couple, Amitabh Bachchan and Jaya Bachchan recently shot for an ad. The duo twinned in white and gave millennials a run for their money with their twinning game.

When he was rejected by a radio company for being unsuitable due to a powerful voice, they wouldn’t have thought that one day that person will rule the industry. Ruling the hearts of millions of people from the last 50 years, Amitabh Bachchan is undoubtedly one of the most desired actors of Bollywood even at the age of 77. He had broken the hearts of millions of young girls when he had tied the knot with Jaya Bhaduri. Married for 46 years, Amit ji and Jaya ji can still give millennial couples a run for their money. The amount of trust that they have for each other, the care for one another, immense love and respect for everyone, these two never fail to gain respect for themselves from everyone. Amit ji and Jaya ji had broken many stereotypes when they had tied the knot and made us believe that if you love someone no obstacle or hurdle can stop you from being together. (Recommended Read: Taimur Ali Khan And Kareena Kapoor Khan Kickstart Their Weekend With A Play Date With Peppa Pig)

Amitabh Bachchan had met Jaya Bhaduri for the first time in the year 1970 at Pune Film Institute. Jaya ji was caught up by Amit ji’s personality but nothing serious had happened. When Amit ji saw Jaya ji’s picture on the cover of a magazine, he couldn’t stop himself from admiring her overall beauty. Amit ji had fallen in love with Jaya ji while he was trying to make his name in the film industry and Jaya ji was an established star. The duo had fought many odds and had convinced everyone that they are made for each other and nothing can stop them from being together. Jaya ji was a perfect blend of modern yet traditional and had perfectly matched Amit ji’s dream woman. They had officially met on the sets of their movie, Guddi and Jaya ji fell in love with him very soon. 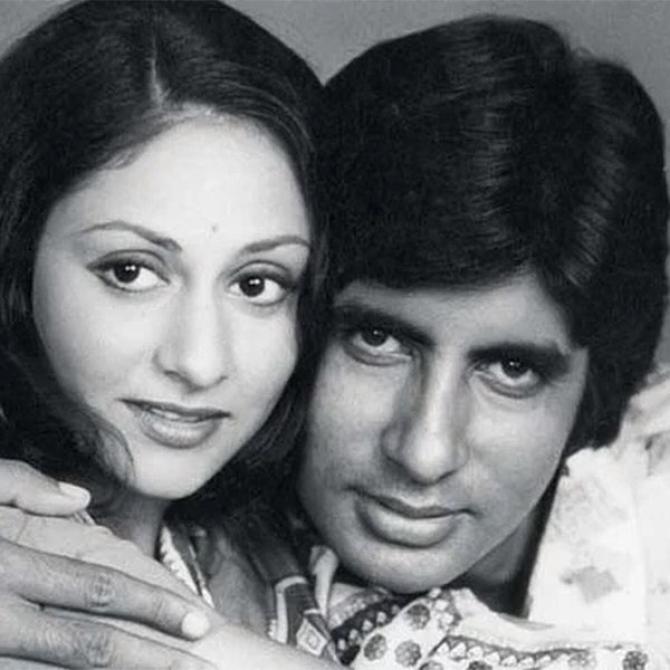 Amitabh Bachchan and Jaya Bachchan have shared screen space many a time but whenever we see their mere glimpse on the silver screen, we just can’t stop ourselves from falling in love with them all over again. Recently, Jaya ji and Amit ji shot for an ad scene together for Kalyan Jewelers and Amit ji shared one picture from the same on his Twitter account and wrote, “T 3419 - - Historic moment for Jaya and me .. 3 superstar sons of 3 Iconic Legends of Indian Film Industry, work together with us .. what honor.. Nagarjun - son Akkineni Nageshwara Rao, Telugu Shivraj Kumar - son Dr Raaj Kumar, Kannada Prabhu - son Shivaji Ganesan, Tamil.” In the picture, Amit ji and Jaya ji could be seen twinning in white and looked match made-in-heaven.

For the ad shot, Katrina Kaif is playing the role of Amit ji and Jaya ji’s daughter and the pictures from the shot are just surreal. In the pictures, we can see on-screen parents, Amitabh and Jaya escorting bride Katrina, who is decked in a stunning bridal avatar, to the mandap. Big B and Jaya ji were donning royal traditional North-Indian styled attires and jewelry.

The other set of pictures feature Amitabh Bachchan, Jaya Bachchan and Katrina Kaif in South Indian attires, as they indulge in festivities like dancing. While Amit ji wore a white veshti, a matching white shirt with cloth tied around his head, Katrina oozes radiance in a bright green silk saree and Jaya ji looks graceful in a brown-deep yellow saree. “Getting her married off,” read Big B’s caption. He also shared a couple of mesmerising BTS pictures with Jaya ji.

Amitabh ji had tied the knot with Jaya ji on June 3, 1973, and after so many years, their love still remains the same. In a 2015 interview with a leading portal, Amit ji had shared his views on love. He had said, "As busy as we get, we need to be reminded that we – my wife Jaya and I – are still sweethearts. In that sense, it makes me stop and realise how wonderful she makes me feel. Jaya is a very spontaneous person. Not at all like me. And it’s just very fortunate for me that she’s from the same profession as me and so she understands. She was always familiar with the environment I was in. She knows what the film industry is all about, so in fact, it’s a boon to have her." 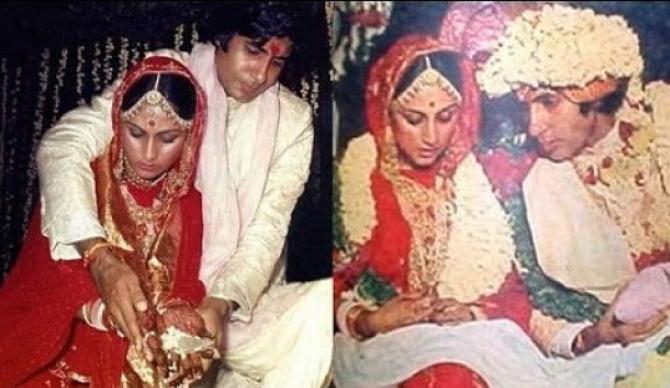 He had further added, “I don’t know, of course, what the situation would have been had I married a lady outside my profession. You say that marriages in this industry don’t last. But with all due apologies and all due respect to others, how do you put me in the same category? In any marriage, there are ups and downs and areas where disagreements take place but that’s all part of it. Jaya is extremely open and very straight. Sometimes embarrassingly straight but that’s how her nature is. I’ve never tried to disturb that quality of hers and she’s not disturbed my quality of being myself. When I want to be left alone, she leaves me alone." (Must Read: Geeta Phogat's 'Precious Little Miracle', Arjun Saroha Turns One-Month-Old, Mommy Posts Cute Picture)