Akshay Kumar Goes Out For A Walk With His Daughter, Nitara, But The Duo Gets A Valuable Life Lesson

Akshay Kumar Goes Out For A Walk With His Daughter, Nitara, But The Duo Gets A Valuable Life Lesson

Akshay Kumar is a doting father, who believes in teaching the right lessons to his kids. Recently, the actor took his daughter, Nitara to a morning stroll, but learnt a valuable life lesson.

In the 90s when the film industry was ruled by the Khans, one actor that slowly climbed the ladder of success, right under the nose of the popular celebrities was Akshay Kumar. Na Hum Amitabh, Na Dilip Kumar, Na Kisi Hero Ke Bache… Hum Hai Seedhe Saadhe Akshay... this song perfectly fits the actor's glorious journey from being a waiter to one of the highest-paid actors in B-town. However, Akshay never lets the success get onto his head and try to remain stick to his grounds. And that's the success mantra for his professional and personal life and he hopes of passing it on to his kids. (Also Read: Taimur Ali Khan Wears A T-Shirt Worth Rs 400 But His Cowboy Shoes Are Way Costlier Than His Outfit)

Yes, Akshay is living a 'happily ever after' with his wife, Twinkle Khanna and kids, Aarav Kumar and Nitara Kumar. He may be a huge star, but it is his role as a father that makes him complete. There have been millions of times when the actor had shared with the world that how blessed he is to have a family to go to. He takes immense pride in spending time with his family more than doing his own action sequence. On top of it, he truly believes that in life, every big and small incident can teach us a valuable lesson. And that's exactly what happened when he went out for a morning walk with his daughter, Nitara yesterday morning. 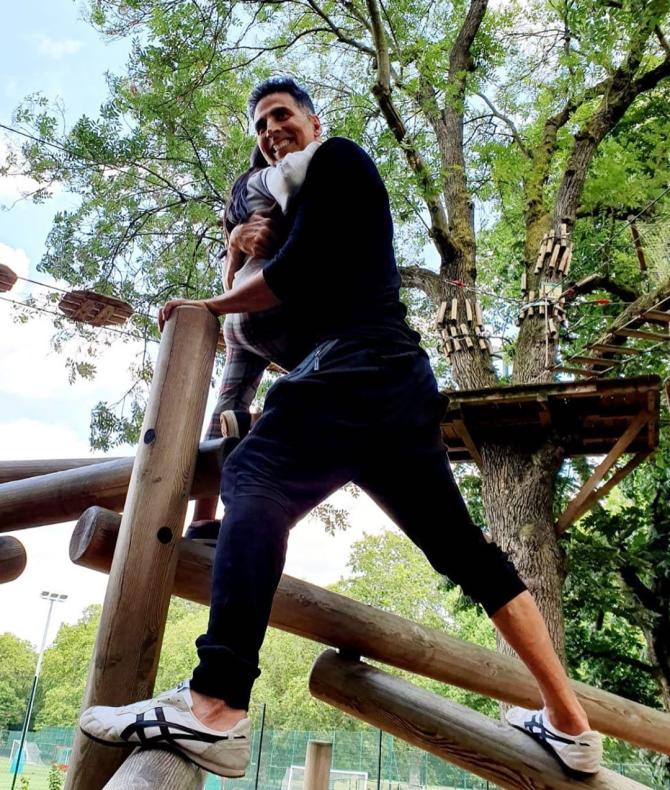 On October 31, 2019, Akshay started his day with a morning walk with Nitara, and the duo visited an old couple's home on their way to drink water. He took to his Instagram handle and shared his experience of how the couple offered more than just water to them. The father-daughter duo clicked pictures with them and the actor posted it on his Instagram feed. Along with it, he wrote, "Today’s morning walk turned into a life lesson for the little one. We walked into this kind, old couple’s house for a sip of water and they made us the most delicious gur-roti. Truly, being kind costs nothing but means everything!" Take a look at the pictures below: 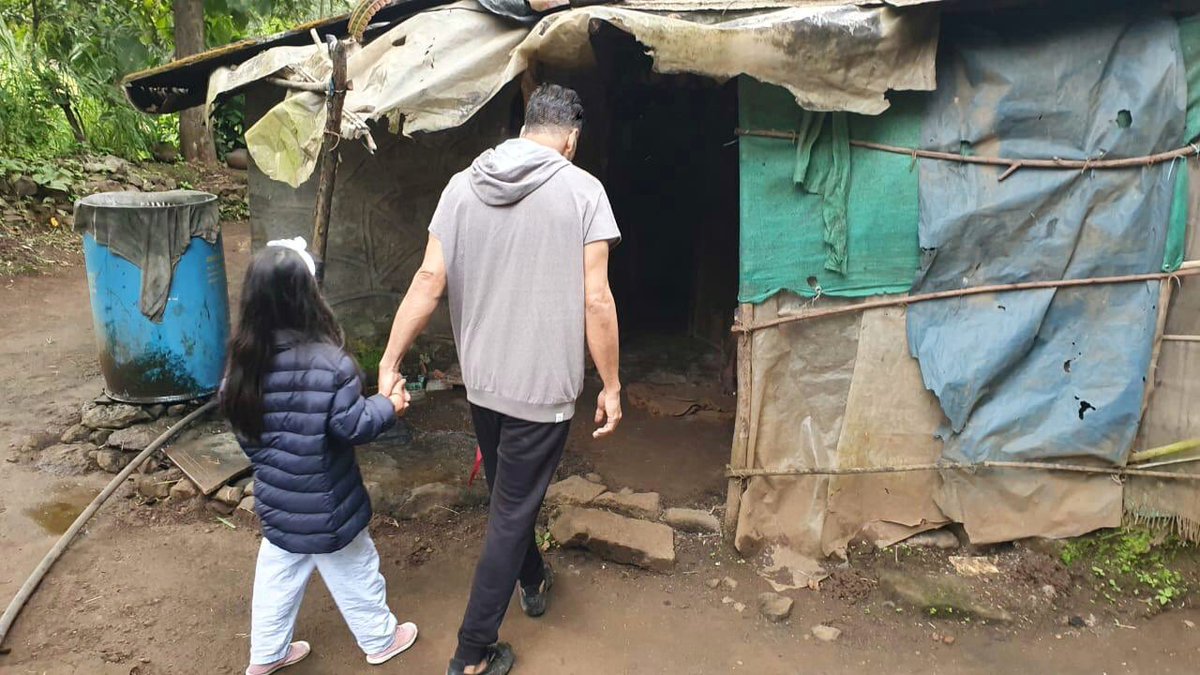 For those who don't know, Akshay's elder son, Aarav is studying abroad. The actor tries to spend as much time as he can with his little girl, Nitara. From early morning walks to flying kites, the 'papa bear' in Akshay is always on duty. He had shared a video of his kite-flying ritual on Instagram and had written, "Meet daddy’s little helper. Continuing our yearly father-daughter ritual of flying kites soaring high in the sky!" (Also Read: Ananya Panday And Suhana Khan's Childhood Pic Is Adorable, Will Remind You Of Your Chaddi Buddy)

While Akshay is a hands-on daddy, he knows that babysitting kids is not at all easy. In an interview with the Mumbai Mirror, he had shared how difficult it is to handle a six-year-old girl. He had said, "My wife (Twinkle Khanna) is touring Europe, my son Aarav is in Oxford for a two-week study course so I'm babysitting my daughter Nitara besides shooting for a film (Reema Kagti's sports-drama Gold). And I have to confess that minding a little girl is a tough job. My admiration for Mrs Funnybones has gone up several notches after realising the magnitude of the task. I don't know how she writes, designs looks after our children and still manages to stay calm on most days." 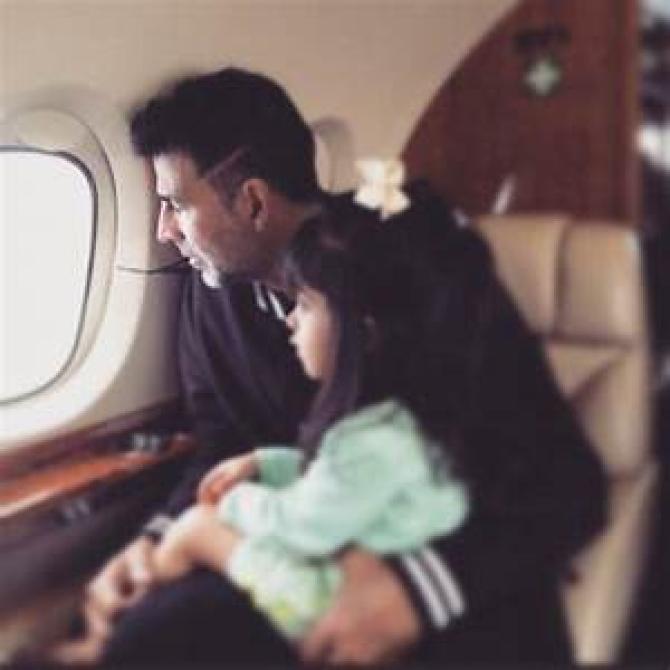 Akshay had further talked about how he had managed the whole balancing act and had said, "Every morning, Nitara and I have breakfast together, then, we go to this park nearby where one can feed rabbits and goats. After her day-nurse comes, I travel to London for my shoot. Post 'pack-up', I take my daughter out again. The other evening, we went to watch Cars. Halfway through the film, she decided that she was tired, so we had to leave and drive back. I tried explaining to her that I wanted to continue watching the movie until the end, to no avail. Bringing up a baby is tough." In an interview with the Hindustan Times, Akshay had revealed that his little girl, Nitara doesn't like being clicked and had stated, "It breaks my heart to hear my six-year-old daughter says she doesn’t want to come out to dinner with her family because the paparazzi will be there and she doesn’t like the flashing lights. Or Aarav not wanting to come for a movie because he just finished training and he doesn’t want to have to deal with people saying he looks tired or sweaty on Instagram and I really don’t blame them. Us as stars may have signed up for this but until our kids decide to be in any form of limelight after college years, then I don’t think they should be publicly followed or scrutinised, out of safety for them physically and mentally. Again, that’s my opinion and like I teach my kids, it’s your choice whether or not you choose to be offended by what others say." (Also Read: Neha Dhupia Went Into Pregnancy Labour During An Edit, Resumed Work Within Hours Of Delivering Baby)

Well, Akshay is a doting father and we love how beautifully he is teaching the true meaning of life to his kids!