Suniel Shetty's son, Ahan Shetty is making it to the headlines for his love life as he is dating Tania Shroff. Checkout how he did 'pyaar ka elaan' with her on social media!

“Main tumhe bhool jaon yeh ho nahi sakta, aur tum mujhe bhool jao yeh main hone nahi doonga...” – Dhadkan. “Pyaar toh usne kiya, Humne toh bas dillagi ki...”- Dilwale. Remember all these dialogues of Suniel Shetty that had created a stir in the industry? His legacy is soon going to be taken forward by none other than his son, Ahan Shetty, whose debut is one of the much-awaited ones. Ahan is soon going to shine on the big screen with his upcoming movie, Tadap, also starring, Tara Sutaria.

It has been a long time that Ahan Shetty is making it to the headlines for his personal life. His personal life has already become an open book wherein his relationship with Tania Shroff is on everyone’s chat list. Moreover, the lovebirds are often spotted in the company of each other at numerous parties and their romantic dinner dates. Now, he has even expressed his love for Tania by writing those three magical words on one of her latest Instagram posts. (You May Like: Neetu Kapoor Can't Contain Her Happiness As She Expects To Be Home With Rishi Kapoor After A Year) 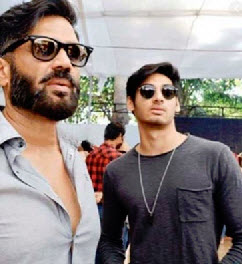 For the unversed, Ahan and Tania recently whisked away for their European holiday. On September 4, 2019, Ahan Shetty’s girlfriend, Tania Shroff took to her Instagram account and shared a picture with him. In the caption written by her, she called him, “My rock”. The doting boyfriend couldn’t resist commenting on the post and straightaway did elaan-e-ishq by dropping a comment that could be read as, “I Love You.” Take a gander at the picture as well as Ahan’s comment: 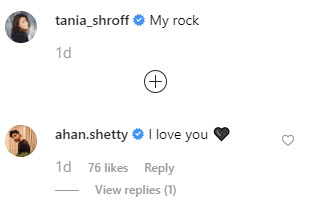 Suniel Shetty is well-informed about his son and his girlfriend. In an interview with Filmfare in 2016, he had shared, “I know his girlfriend. He is a boy. He will have girlfriends. I have told him to respect that girl. Maybe she will be your girlfriend for some time. That is your internal thing but don’t ever talk about it. She has another beautiful side to her life. She is someone’s daughter. Respect every woman you have in your life like she is the only woman in your life. Otherwise aisi haai lagti hai aapko ki aap bacha nahin paaoge khud ko (if a girl curses you, nothing in the world can save you). So whoever it is, respect that girl." (Also Read: Mira Rajput Kapoor Shares A Sneak Peek From Zain Kapoor's First Birthday Bash Preparations) 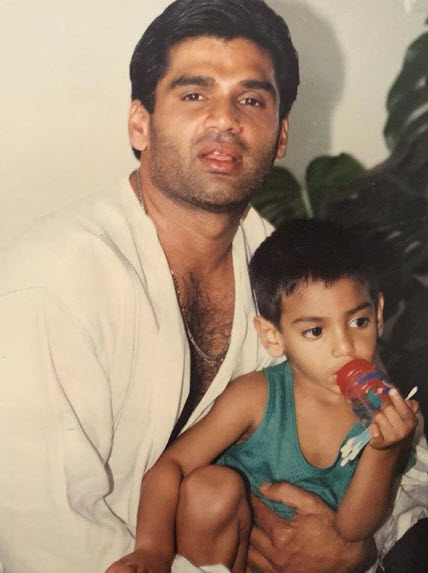 On the work front, Ahan will dive into the shooting of Tadap, right after coming back from this romantic getaway. Tadap, directed by Milan Luthria, is a Hindi remake of a Telugu hit movie, RX100. On August 6, 2019, a movie critic, Taran Adarsh had announced the news on social media and had written, “Ahan Shetty - son of Suniel Shetty - begins his journey in #Hindi films. His debut film - the #Hindi adaptation of #Telugu film #RX100 - begins filming today at a South Mumbai theatre. Costars Tara Sutaria. Directed by Milan Luthria. Produced by Sajid Nadiadwala.” 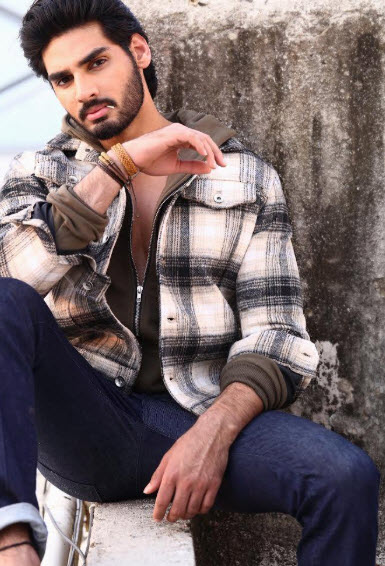 Talking about the film, Milan Luthria told IANS, "The plot of the film is very intriguing. It is a love saga which will leave the audience surprised. It's a stark love story, with both the leads having strong parts. I have seen Tara and Ahan perform together during the rehearsal workshops and they have immense chemistry. We're set to go now." (Checkout: Alia Bhatt And Ranbir Kapoor's Varmala Ritual Wedding Photo Gets Viral On Internet, Here's The Truth) 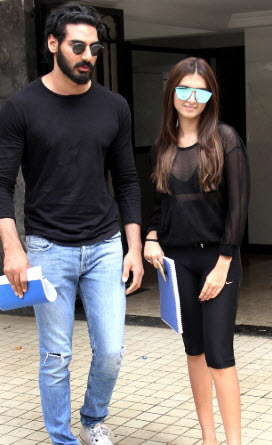 How sweet of Ahan to have dropped such a lovely comment? What do you guys have to say? Do keep us posted!