Aadhi Pinisetty and Nikki Galrani's wedding planner, Ambika Gupta shared minute details about the duo's wedding and pre-wedding ceremonies. She also revealed a surprise by the groom to his bride!

South Indian actors, Aadhi Pinisetty and Nikki Galrani had tied the knot on May 18, 2022, in a traditional wedding in Chennai. For the unversed, Nikki and Aadhi had been dating for quite some time, and on March 26, 2022, the much-in-love duo had also shared pictures from their intimate engagement ceremony in attendance of their family and close friends. And the pictures were simply blissful.

Soon after their wedding, Aadhi Pinisetty and Nikki Galrani had taken to their respective Twitter handles and had shared some unseen pictures of the duo lost in each other. Sharing the same post and tagging each other, they had written:

"Celebrating Love Getting married in the presence of all our well-wishers was truly a moment we'll cherish forever. We seek for your blessings & love as we take on this new journey together." 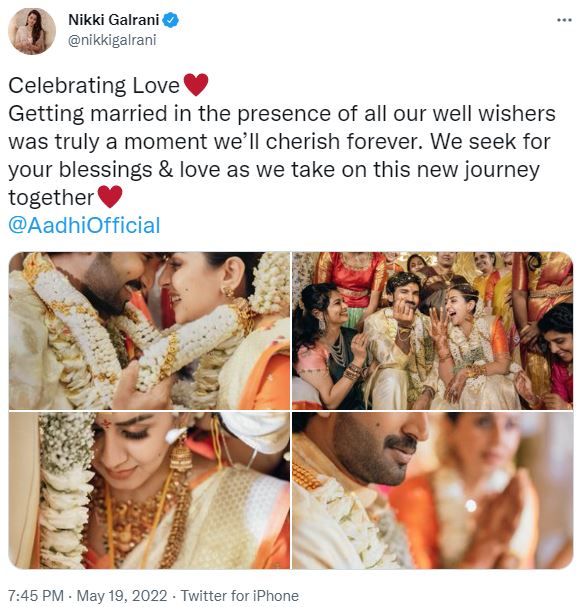 In an interview with the ETimes, the Chennai based luxe event designer, Ambika Gupta revealed a few insights about Aadhi Pinisetty and Nikki Galrani's grand wedding. She shared that since Nikki's favourite flower is sunflower, and also that the duo wanted a sustainable wedding, so Ambika's team picked up shola pith flowers(dried white-coloured spongey plant part) for the decor. She said:

“The only brief I got from Aadhi and Nikki was that they wanted the wedding to be beautiful. Being actors and creative people, they have good décor aesthetics. Their mangal snanam on May 17  was hosted on the lawns of a star hotel, and we worked on designs that were centred on the amaltas trees. It has golden flowers, and is a symbol of prosperity and eternity. So, everything at the venue was in shades of orange, yellow and white. Nikki’s fave flower is the sunflower, and we incorporated that in the theme as well. We’d used sholapith flowers for the wedding. It’s actually a dying art form, practised by artisans from Bengal. The flowers are completely recyclable; they degrade as well and don’t spoil the environment.” 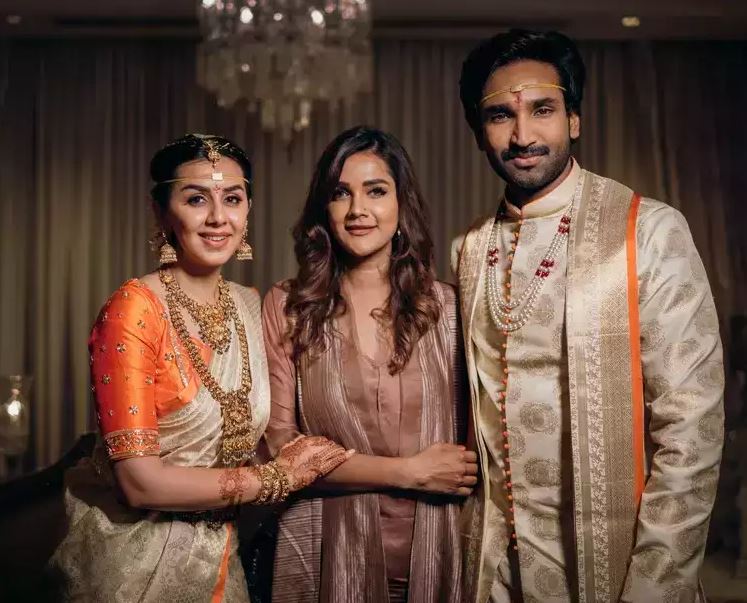 Ambika also mentioned that Aadhi and Nikki's wedding ceremony had held according to Telugu rituals. However, the wedding designer also added that the couple had ensured that they had paid tribute to Nikki's Sindhi roots as well. Ambika added:

“Though born and brought up in Bangalore, Nikki was keen to have her wedding as per Telugu traditions. But to honour her Sindhi roots, we incorporated kaliras in the décor and even in the bridal floral chadar. The two had given us the vows they set for each other. We had put up printed copies of them on every guest’s chair.” Further, in the same conversation, Ambika revealed a cute fact about the newlywedded couple. Mentioning that Nikki and Aadhi had also engaged rings during one of their pre-wedding ceremony. Ambika said since Nikki had liked a ring a long time ago, but couldn't get it at the time of their engagement. Thus, Aadhi had loving prepared this sweet surprise of gifting her the same ring during her wedding. Talking about the same, the event designer explained:

“Nikki had seen a ring a long time ago and told Aadhi how much she loved it. But Aadhi couldn’t get it when they got engaged. Nikki had also enquired about it, but the shop had told her the ring was sold. She had no clue that Aadhi had already bought it for her. During the mehendi, as part of the games, Nikki was blindfolded and Aadhi went down on his knees and proposed with the ring. Nikki’s reaction was priceless.” 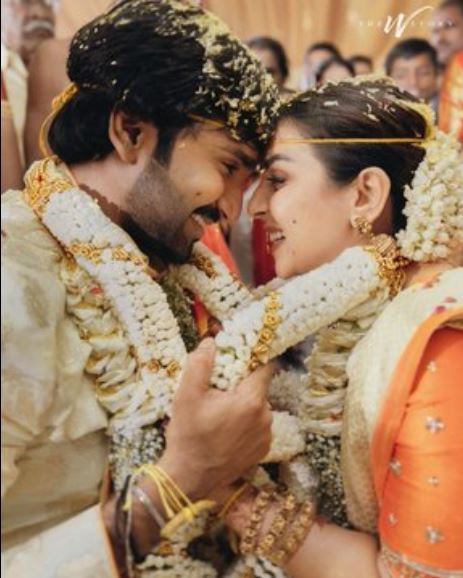 The celebrity wedding designer, Ambika Gupta also opened up about Aadhi and Nikki's wedding in an interview with Pinkvilla. She mentioned the then bride's saree change during their wedding and how in that short time, the designer's team had also incorporated a few details in their wedding decor. Ambika mentioned a few other minute details about the couple's wedding and explained:

"The couple wanted to keep their wedding decor classic, unique and memorable and we just made sure that we followed this goal and tailor-made all the events to somehow embody both their personalities and the beauty of their love story. The decor was contemporary South-Indian as we did not choose predictably, traditional flowers like marigolds but had a very beautiful collection of the most exquisite flowers from India and Holland. Apart from the white valley of infinity, we envisioned a majestic mandap that had elements of gold, white and ample detailing. After Nikki went for her second saree change, we incorporated in the mandap, two tuberose pillars, which were seamlessly made with a ring on top. To add to the beauty of the mandap, we also had a water body with floating candles and diyas. The infinity was represented by a mirrored structure with acrylic birds flying out. 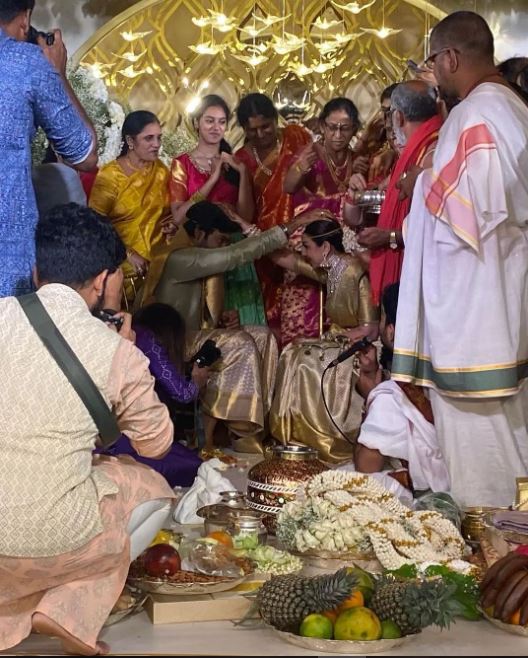 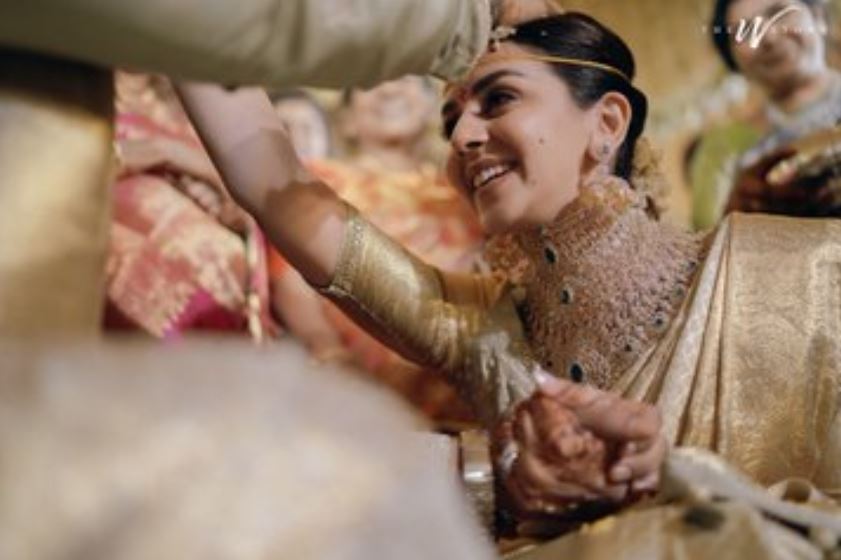 For the reception, the just-married couple opted for a dreamy ballroom decoration and ensembles. In the pictures which surfaced on social media, Aadhi was seen wearing a white bandhgala suit and his wife, Nikki looked ravishing in a light-green coloured long gown. Talking about the same, Ambika mentioned that the couple had a wedding after-party on May 18, 2022, and for the same, the couple had opted for white blossoms. Ambika explained:

“Actors Nani and Sundeep were part of all the celebrations and they also gave speeches. The night ended with an after-party at a popular restobar near the wedding venue.”

Also Read: Bobby Deol Reveals Why He Married Wife, Tanya Early: 'Wanted To Have A Child As Soon As Possible' 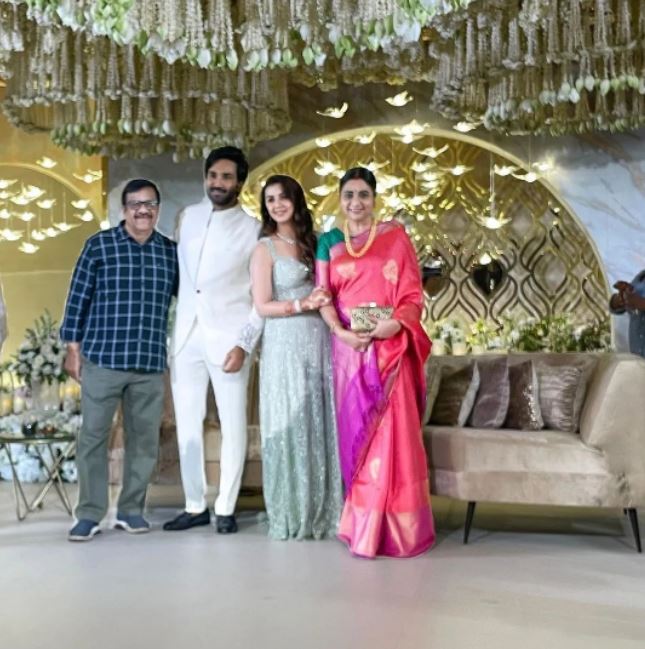 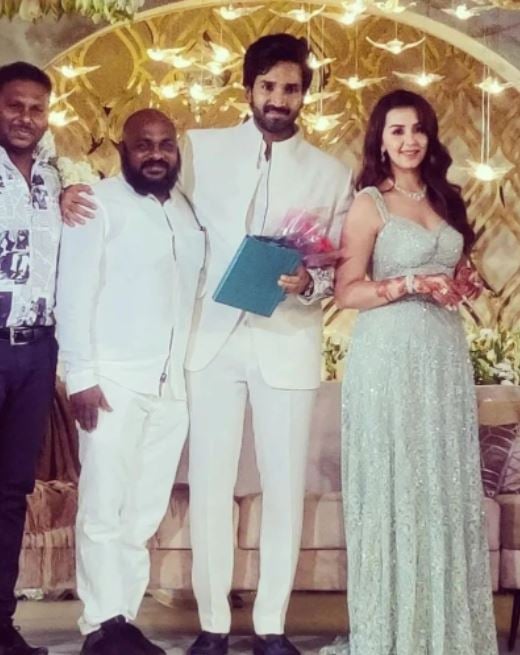 Ambika Gupta who had earlier designed Kajal Aggarwal and her hubby, Gautam Kitchlu's wedding, revealed that Aadhi Pinisetty and Nikki Galrani's pre-wedding celebration was also entirely themed. And their mehendi ceremony was designed based on the Bali theme since it was the couple's first vacation destination. Talking about the same, Ambika mentioned:

“Bali was the destination that Nikki and Aadhi had first visited as a couple. Also, Aadhi likes everything in shades of white and brown, and is a big nature lover. Nikki used to tell us that she was the bling in their relationship. So, we decided to call the theme for mehendi, Bling It In Bali! We used undertones of dull gold, and even the canopy behind the couple was very Bali-centric. While for mehndi, it was 'Bling it in Bali' and even though it was organised in the couple's garden, it was representative of their favourite holiday destination. The decor incorporated Aadhi's love for verdure, cane furniture, leather accents with touches of white, brown and green and also Nikki's favourite bling elements. The entire decor was very bohemian, very representative of Ubud and looked like a global destination right in their backyard.”

In the same conversation, Ambika added about the theme of 'Amaltas- The Golden Shower Tree' for their haldi ceremony and said that she and her team had incorporated Aadhi and Nikki's every wish into their wedding. But, revealing that the duo's personality is entirely different, she concluded by saying:

"For Haldi,  the theme was, 'Amaltas- The Golden Shower Tree'. The theme of yellow and pure white flowers was incorporated because Nikki loves sunflowers while Aadhi is very serene and calm. The two trees represented the coming together of two people from completely different worlds to start a new life. Also, we chose Amaltas because this Indian flowering tree represents prosperity. There was also a beautiful water body, with orange flowers and the entire ambience was tied together by a colour palette of white, orange and yellow along with green. The decor was contemporary South-Indian as we did not choose predictably, traditional flowers like marigolds but had a very beautiful collection of the most exquisite flowers from India and Holland. " 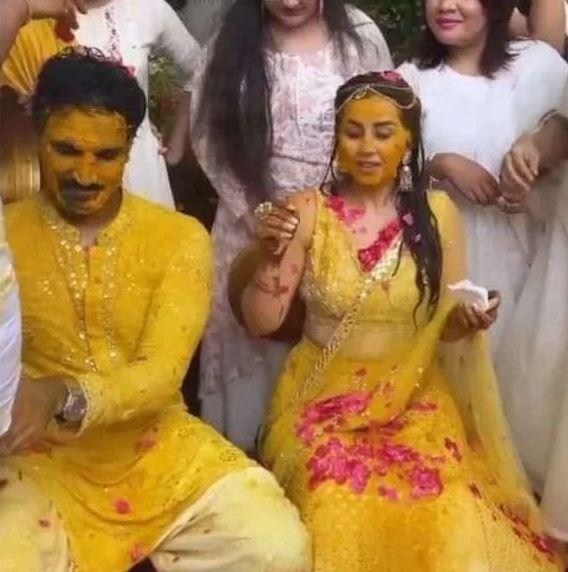 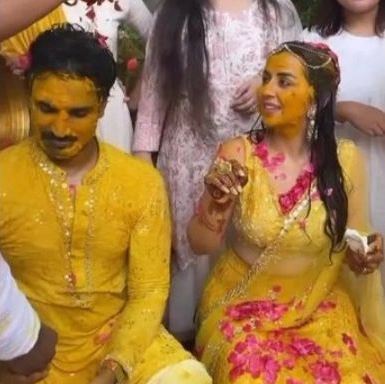 Well, we are already drooling over Aadhi and Nikki's wedding and pre-wedding glimpses! What about you? South Indian stars, Aadhi Pinisetty and Nikki Galrani are on cloud nine as they started the new journey of their lives after tying the knot with each other on May 18, 2022. For the unversed, Nikki had made her debut with a Tamil film, Darling, in 2015. On the other hand,