To confess his everlasting love for his lady, Anushka Sharma, Indian Cricket team captain, Virat Kohli has shared something really adorable on his Instagram handle. Check it out below!

As the world is under lockdown due to the spread of novel COVID-19 pandemic, everyone’s life has almost been paused and people are spending time with their parents, spouse or kids. In the fast pace of life, most of us have forgotten what it means to be with our loved ones, rather than just working 9 to 5, like machines. This lockdown has come as a breath of fresh air for every relationship as now every bond has the time to thicken itself even more. (Also Read: Kareena Kapoor Khan Wishes Her 'Queen' Babita On 73rd Birthday, Posts Throwback Picture With Randhir)

Virat Kohli and Anushka Sharma are also spending their time together in the lockdown. The couple is not just taking every right measure to make their fans aware about the pandemic and the ways to deal with it but is also sharing some cute snippets of their life with their fans, through their respective social media handles. The quarantine phase seems to be doing great on the couple as otherwise either one of them is busy with their work commitments. To confess his everlasting love for his lady, Indian Cricket team captain, Virat has shared something really adorable on his Instagram handle. 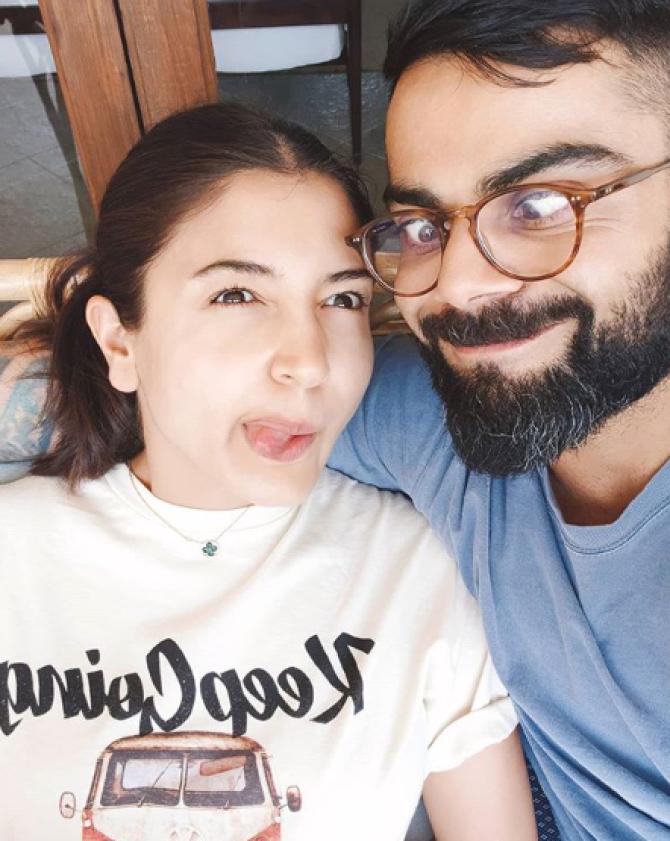 On April 19, 2020, Virat took to his Instagram stories to share a fanmade artwork which shows Anushka’s image being painted on his heart. The art seems to be inspired from Lord Hanuman. The way Lord Hanuman proved his love for Lord Ram in Ramayan, similarly, Virat’s heart is shown to be captured by his darling wife, Anushka Sharma. Virat captioned the picture as “Wonderfully accurate art” along with a kiss-eye emoji. Take a look at the picture. 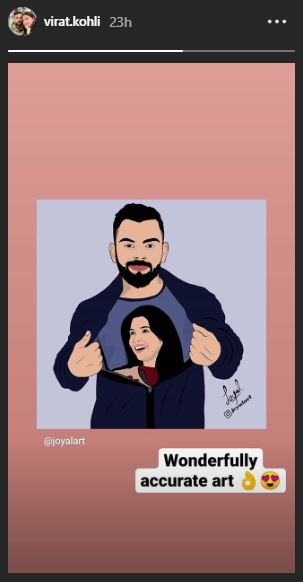 Virat and Anushka have been posting all sorts of pictures and videos to show their ‘quarantine love’ On April 17, 2020, Anushka Sharma had taken to her Instagram handle and had posted a video of herself lip-syncing a fan’s voice, as she cheers him to hit a four. The actress looked beautiful in her simple attire as she could be seen wearing a white-printed top. While her hubby, Virat could be seen wearing a charcoal-coloured T-shirt and specs. Along with the video, Anushka had written a caption that could be read as “I thought he must be missing being on the field. Along with the love he gets from millions of fans, he must be especially missing this one particular type of fan too. So I gave him the experience.” Take a look at the video. (Recommended Read: Chahatt Khanna Feels The Term 'Single Mother' To Be Derogatory, Wants To Settle Down Again In Life)

On April 14 2020, Anushka had taken to her Instagram handle and had posted a lovely picture of herself along with her husband, Virat on her stories with the caption, "Felt cute, might delete later." Indeed, they looked so cute. Have a look at the adorable picture here. Not just Anushka, Virat is also vocal about the way the couple is spending their lockdown phase. On April 13, 2020, Virat had given us another glimpse of how his lockdown life has been treating him. The cricketer had taken to his Instagram handle and had shared a lovely picture with his wife, Anushka and their pet, Dude. In the picture, Anushka could be seen cutely giving a peck on Dude's face while Virat had captured the moment. Alongside it, the cricketer had written, "Knowledge of what truly matters in life is a blessing." Check it out below. (Don't Miss: Karan Kundrra Clears Air On His Alleged Breakup With Girlfriend, Anusha Dandekar, Slams The Rumours) 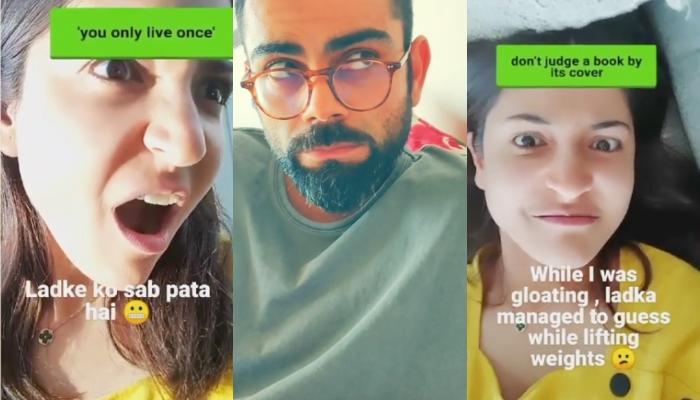 To fight the boredom during the ongoing COVID-19 lockdown and in the absence of socialising and outdoor activities, social media is flooded with hilarious challenges and creative trends. From #QuarantinePillowChallenge, #PoopChallenge, #NakedChallenge, #FliptheSwitch, #DontRushChallenge, #SareeChallenge, #DalgonaCoffeeChallenge, #TheGestureChallenge to #OhNaNaNaChallenge, the social media trends have kept everyone occupied during the lockdown. Latest