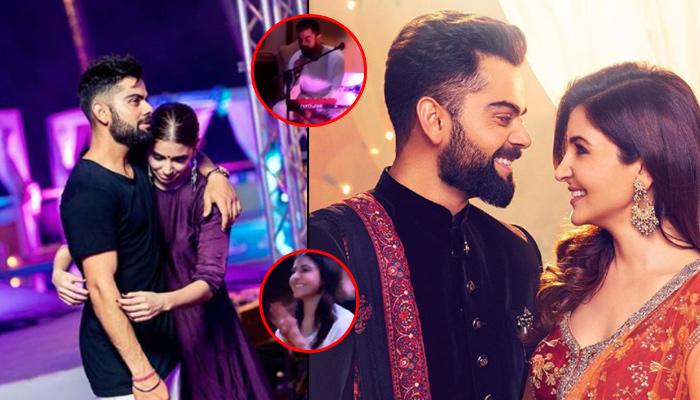 Since the time, Virat and Anushka made an announcement of their wedding, every girl just can’t get over this fact that their crush is taken by this lovely lady. From the time when they shook their legs on their friend’s wedding to the time when Virat adorably called Anushka his lucky charm, we used to fall in love with this couple with their every gesture.

Giving a perfect ending to the year 2017, Virat and Anushka tied the knot on December 11, 2017, in a private wedding in Borgo Finocchieto, Italy. The dapper looking dulha in exotic Sabyasachi sherwani, couldn’t take off his eyes from his dulhaniya from the moment she stepped out in her bridal avatar, giving major husband goals.

The couple will host a reception party for their relatives in Delhi on December 21 and another one in Mumbai on December 26. After spending the new year together, Anushka will start shooting for her next film with SRK. As per the reports, the couple will shift to their new residence, which is a sea facing house in Worli.

Also Read: 25 Famous Indian Celebrities Who Tied The Knot In 2017 With The Love Of Their Lives

From hugging her after they exchanged the rings to holding her hands throughout the wedding, Virat is melting everyone’s heart with his sweet gestures for his lady-love. We’ve seen his cricket skills, we’ve seen him dance, and now it seems like he is a phenomenal singer too!

In a video that is taking the internet by storm, the Delhi lad is seen sitting on the stage, singing the song Mere Mehboob Qayamat Hogi song which was originally sung by Kishore Kumar in the movie Mr X in Bombay. We can hear, the excited bride saying ‘Waah’ after Virat stops singing and I guess all their fans had the same reaction as her.

Their wedding was nothing less than a fairy tale and we can’t stop drooling over the pictures and videos. This video of Virat has melted our hearts to the core and it made their wedding even more magical.

NEXT READ: 10 Times Anushka Sharma Looked STUNNING In Traditional Outfits And Swept Us Off Our Feet