Prince Narula and Yuvika Chaudhary got married on October 12, 2018, at the famous Sun n Sand hotel in Juhu, Mumbai. Pictures and video from their wedding functions have been going viral on social media. It was truly a star-studded affair where who’s who of Bollywood and telly land graced the occasion. Prince and Yuvika’s wedding festivities kicked-off on October 10, 2018, with havan and mehendi, and after 3 days of fun-filled affairs, Prince and Yuvika are now officially each other’s forever. (Also Read: Priyank Sharma Arrived With Alleged Girlfriend, Benafsha Soonawalla To Prince And Yuvika's Wedding)

Now, Privika (as they are fondly called) fans must have seen the pictures and videos from the various pre-wedding and wedding ceremonies. But how about, you guys, catching the glimpses of the unseen moments from Prince Narula and Yuvika Chaudhary’s wedding? Sharing a post-wedding video, thanking their official wedding photographers, Epic stories, Prince wrote, “Waheguru thank you @epicstories.in you guys are so amazing thanku. meri life ka Imp part capture karne k liye #blessed”. And now, take a look the unseen moments from Privika’s wedding:

Guys, don't you get reminded of Virat Kohli and Anushka Sharma's wedding after watching the above video? After, sharing the above video, Prince also uploaded another video in which the newbie couple can be seen cutting their cake post their wedding. Prince captioned it as, “I love u Biwi #patni @yuvikachaudhary”. Take a look:

The same video was earlier shared by former Bigg Boss contestant, Vikas Gupta on his Instagram handle. He beautifully captioned it as, “And it is official Mr & Mrs Narula. Congratulations. May this love makes you both stronger with each passing day #FirstKiss as #husbandandwife #privika #stayblessed P.S., there are benefits of being the last guest. You get to witness the love and understand what a groom and bride feel when they finally get married and all the guests go away and they advise you to get hitched”. Speaking of Vikas Gupta, we earlier brought to you the story of how Vikas played cupid between Prince and Yuvika, and in fact, he was also the last guest at their wedding. Sharing the following pictures, Vikas wrote on his Instagram handle, “Well there are no points in guessing who was the last guest to the wedding but I did manage to see them on their wedding and how happy it made me seeing you married @princenarula from the boy that I met who came to Mumbai to this responsible man, so so proud of you and you are giving us goals now @yuvikachaudhary may you always be laughing and happy like in this moment captured you have made a man out of this boy . May you both live happily ever after #Privika #mereyaarkishaadihai #princenarula #yuvikachaudhary P.S. I am so glad, I made it to your special day. Ab kehte hain naa, some things are written. I am the one who first made you both meet and I was the last guest on your wedding #Alwaysthere”. (Read More: Prince And Yuvika Met Due To This Famous Person, But He Was The Last Guest To Attend Their Wedding) 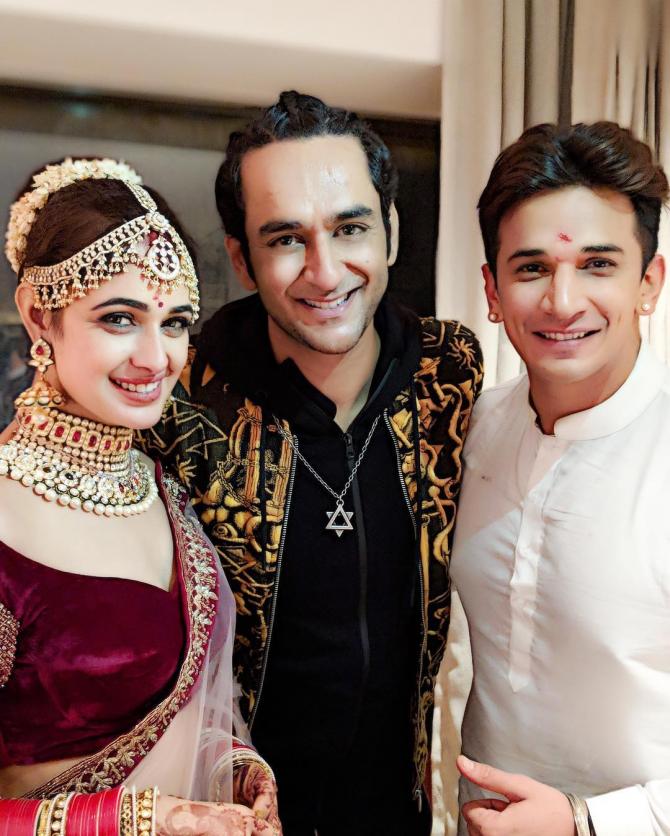 Post the wedding, Prince took to his Instagram stories and shared Yuvika’s first look after marriage. In his posts, the couple could be seen playing post-wedding games. Yuvika sang beautifully songs for Prince. We know you don’t want to miss any picture or video. So, take a look:

Did you know that Prince and Yuvika first met inside the Bigg Boss house? The reality show which is known for giving so many couples to the telly land has also given us Privika. Who would have thought that one day these two would get hitched forever? Reminiscing the same, Yuvika once shared, “We were strangers inside the Bigg Boss house. While Prince developed a strong liking for me at the beginning of our stay, I wanted to take some time. We fell in love much after the show ended. I even told him inside the house that if he is trying to be pally with me for the ratings, I am the wrong girl”. (Don't Miss: Priyanka Chopra And Nick Jonas's Wedding Venue Confirmed, Getting Married In This Palace) Well, many congratulations to the newbie hubby and wifey. May they always remain happy. Guys, how did you like the unseen moments from Prince Narula and Yuvika Chaudhary’s wedding? Share your thoughts below.