We are heartbroken hearing about celeb breakups, because we never really thought trouble will ever find a place in their paradise. However, there are a few couples who have withstood the test of times in the glamorous industry, and have been with their partner through thick and thin. And we cannot help, but say that they do make us believe in the happily-ever-after fairytale lives we have all thrived on.

Together For More Than A Decade, Karanvir-Teejay Have Been Giving Amazing Relationship Cues

So, take a look at these small screen actors who will reaffirm your faith in this tingly feeling in our hearts called love! 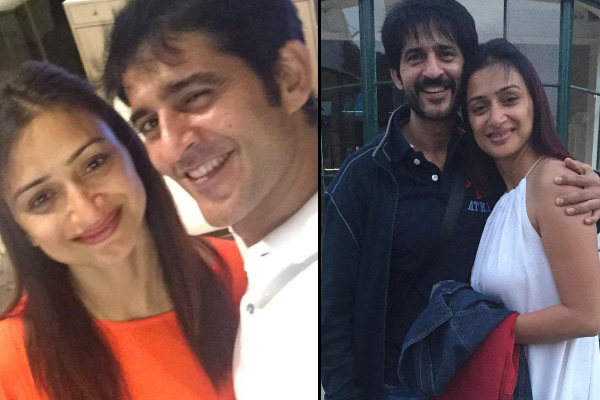 Hiten and Gauri are often referred to as the first jodi of the television industry. They first met on a commercial shoot, and once again on the set of Kutumb where they were cast opposite each other. Their love-hate relationship in the serial was much talked about. Seeing that they were adored by television viewers, Ekta Kapoor cast them again for Kyunki Saas Bhi Kabhi Bahu Thi. With growing familiarity and working with each other day in and out, the two apparently fell in love. After dating each other for two years, they tied the knot on April 29, 2004 and the happiness in their relationship quadrupled with the arrival of their twins, Nevaan and Katya in 2009. 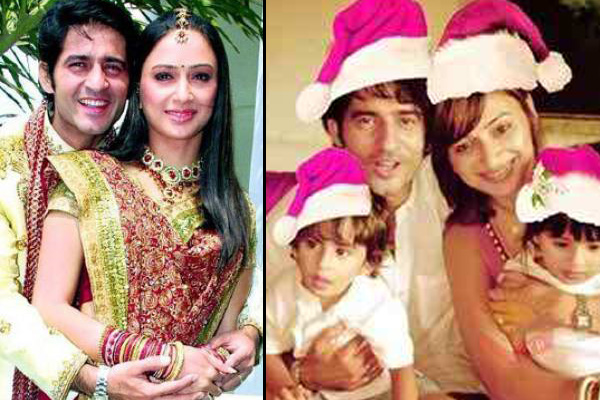 Ram Kapoor and Gautami Gadgil worked together in the year 2000 in the then popular show, Ghar Ek Mandir, where Gautami played the role of Ram’s sister-in-law, and later on his wife. Their personalities were poles apart, but that did not keep them from seeing each other. The two had to convince their parents because Gautami was a Maharashtrian and Ram a Punjabi. They tied the knot on February 14, 2003, and are now proud parents of two kids- a daughter, Sia, and a son, Aks.

Also Read: 25 Hottest Indian Television Couples Who Fell In Love While Working Together 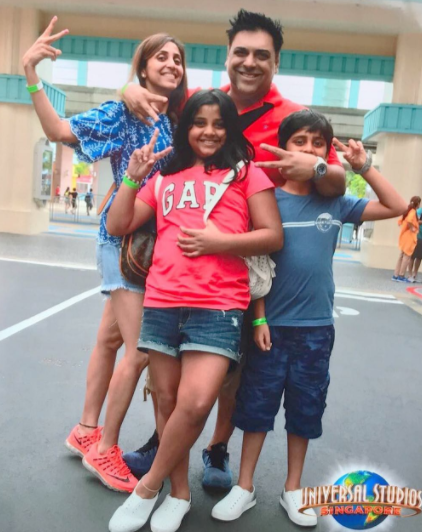 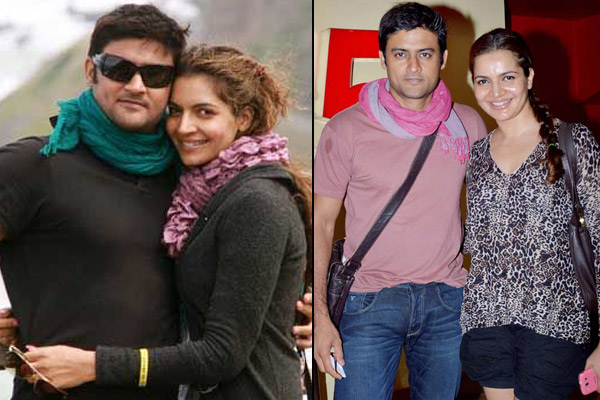 This absolutely hot couple met each other on the popular series, Kahani Ghar  Ghar Kii, and worked together in another show Kkusum. They hit it off instantly, and soon became the best of buddies. But when Shweta realised that Manav had developed a liking for her which was more than friendship, she took a step back. Blame it on their past experiences, but both of them stopped talking to each other. However as destiny had it the two started missing each other, and as a natural turn of events they started seeing each other. After almost three and half years of courtship, the couple got married on December 6, 2004. On May 11, 2012, the couple became proud parents of a baby girl, Zahra. 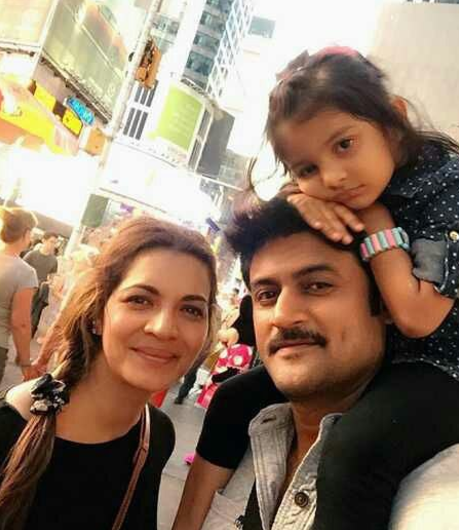 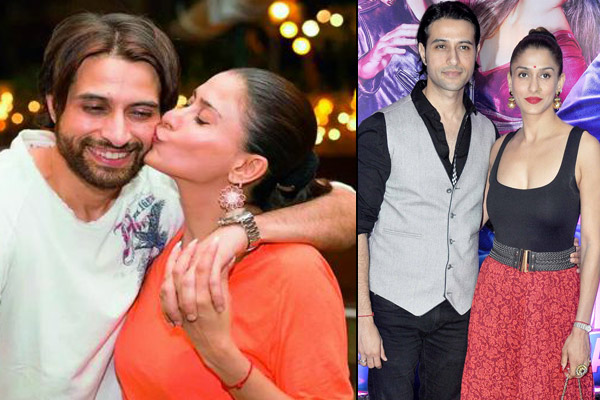 These two lovebirds have never shied away from public eye when it comes to confessing their love for each other. What better testimony to their love than their comeback together on Bigg Boss, and declaration of love for their telly audience. The two were introduced to each other by mutual friend, actress Rakshanda Khan. Shilpa already had a huge crush on Apurva after she saw him in the movie Pardes. The two were inseparable after that, and within six months of courtship they decided to get married on June 24, 2004. 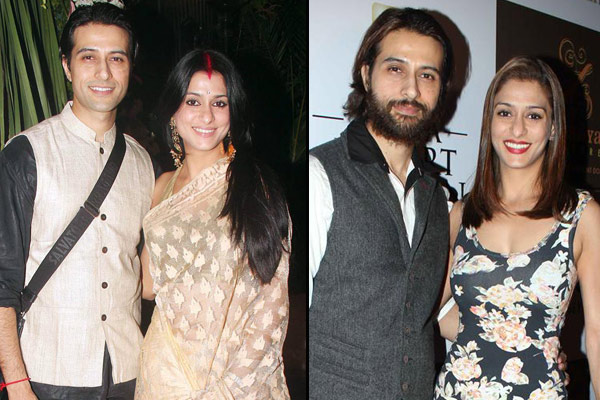 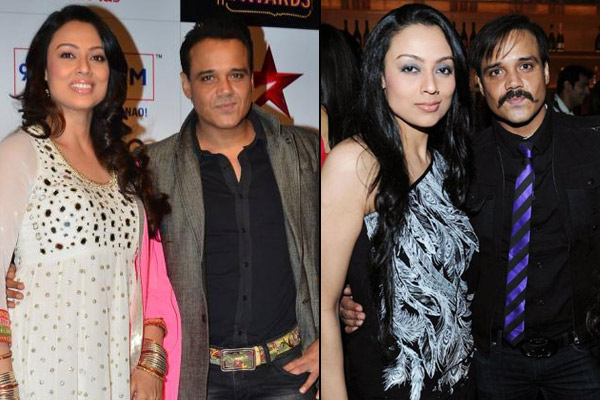 Like Gautami Gadgil, Gauri Yadav too played the role of Yash’s sister-in-law in the television series, Kahin Kissii Roz. According to Yash, it was love at first sight for him. Striking the chord of friendship and dancing to its tunes he proposed her after eight months. Interestingly, Gauri had gone to meet Yash at his house because he had not been keeping well for three days, and did not turn up for the shoot as well. It is then that he proposed to her. Gauri was of course bowled over by the simplicity of his proposal, and said yes! They got married in 2003 and are blessed with two daughters, Pari and Mayrah. The two were seen together as finalists in the dance reality show, Nach Baliye season 2. 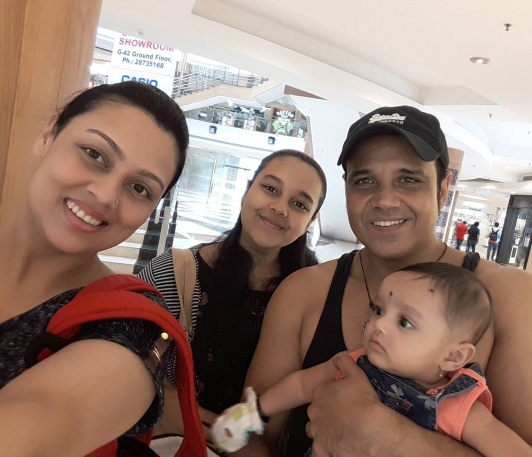 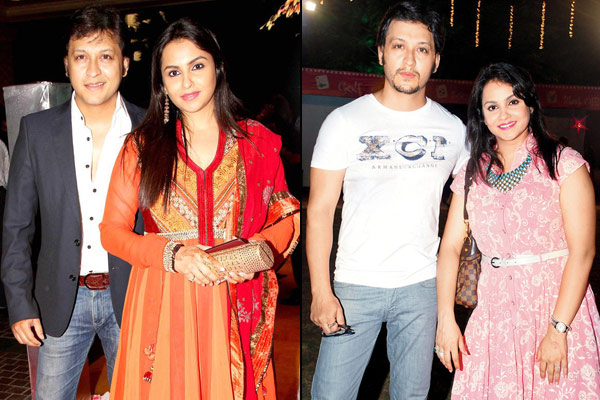 We remember this couple from the series, Sanjivani who played best friends, don’t we? The simplicity of their story has us going aww. Gurdeep remembers her first scene with Arjun where she has to run into his arms, and in one of the interviews before their marriage announcement, she had said:

The two hit it off like best friends and started going out a lot together. Soon, they realised that they were meant to be together. They got married in 2006 and are together for more than a decade now. They welcomed their baby girl, Meher in 2010 and a baby boy, Mahir in 2015. 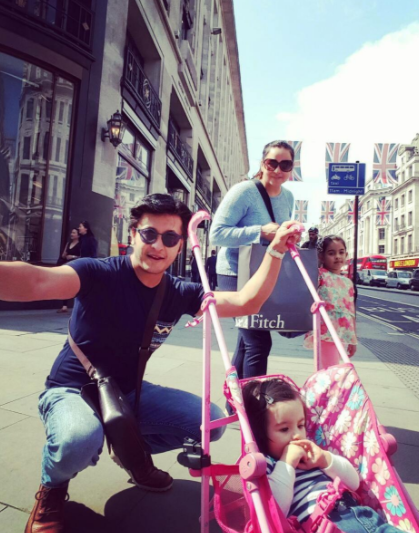 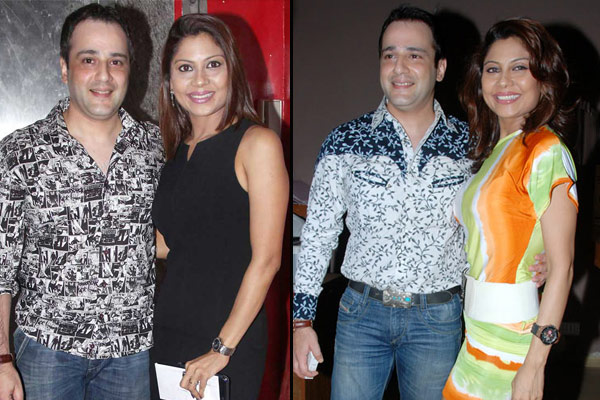 Late actor Sanjit Bedi played cupid for Mihir and Manini. Sanjit, who worked with Mihir on the show Sanjivani, introduced them to each other at one of his parties. It was then that the vivacious Manini and suave Mihir developed a liking for each other. Manini was already divorced and was a single mother to her daughter Dianoor, who is now 17. But that did not come in the way of their love for each other. The two got married on December 30, 2004. 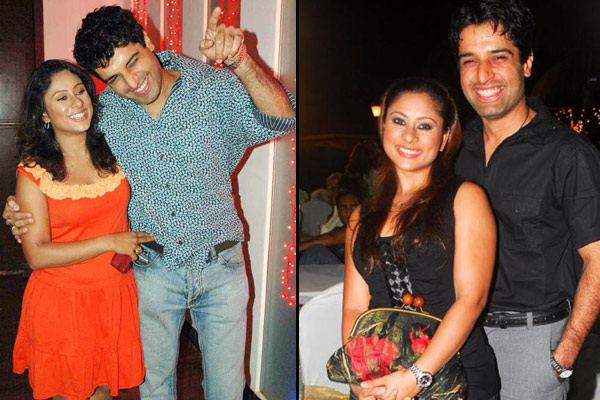 Sai and Shakti met on the sets of Saara Akaash, and shared brilliant chemistry with each other. While Sai already had a ‘good friend’ in Chaitanya Tambe who was her childhood friend, she sort of knew that it was a relationship of a different level altogether with Shakti. But, Sai gave her relationship with Chaitanya a shot and spent some 15 days with him in the US. However, it seems destiny had some other plans for them. It was Shakti who at first realised he was falling in love with Sai and so did Sai’s mother to whom Sai shared her growing fondness for the lad. And, as they say the rest is history! Shakti proposed to her and the two got married in January 2005. They were blessed with a daughter in 2011. 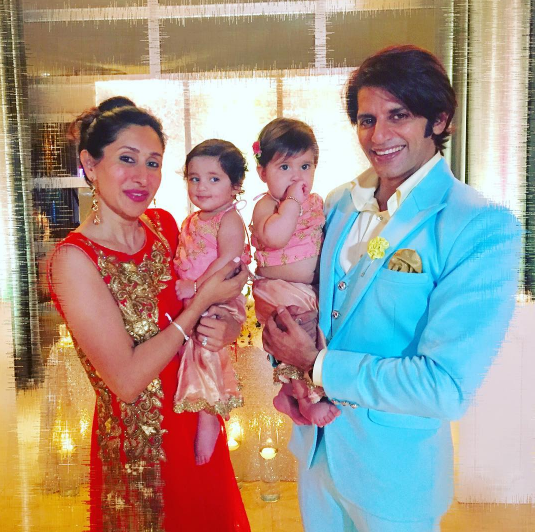 Karanvir and Teejay met outside Mother Mary Church in Bandra for the first time. And, they ended up talking to each other for a few hours on the steps of that church. It was a few months after that they exchanged numbers, and came around to talking to each other daily. Karanvir was totally smitten by her in their second meeting itself, and decided to propose to her at the place where they had first met. In Karanvir’s words:

“We think there’s a strange spiritual connect we have with the place, with each other.”

They got married in 2006 and have been together, and much-in-love since. Till today, they try to visit the church together to light a candle. The couple welcomed their twin daughters Vienna and Raya Bella, in Ocotber, 2016, almost after 10 years of marriage. 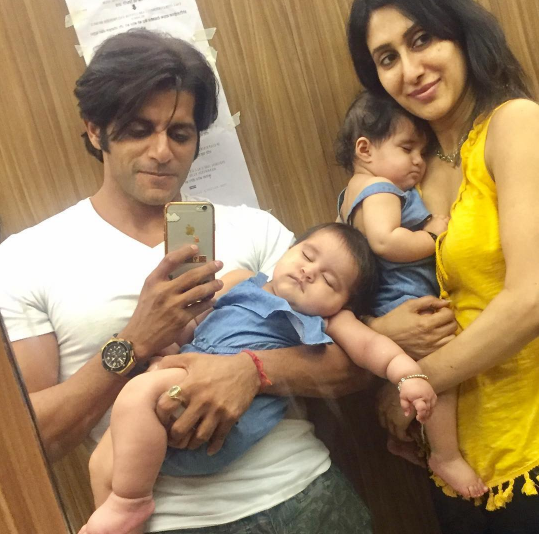 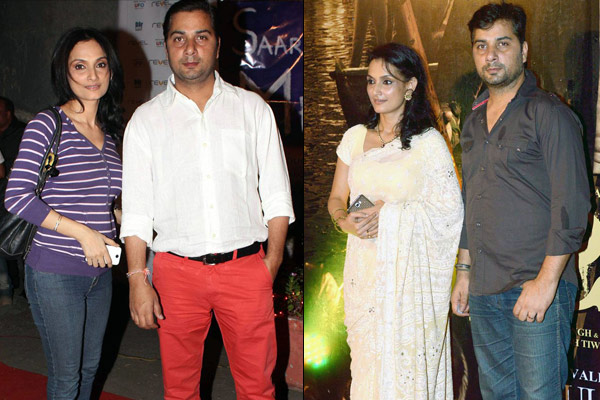 Rajeshwari and Varun first met on the sets of the Zee TV show, Antakshari. They hardly interacted then. However, their second meeting at a common friend’s birthday party sparked off their romance. Varun found Rajeshwari quite jovial, and loved talking to her. Their friendship had grown so strong that getting married was the next logical thing to do. However, there was no formal proposal from Varun’s side. But when everything was arranged, Rajeshwari insisted on a formal proposal that she eventually got from Varun, and she said yes. They got married in 2004, and have been happily married since. They became proud parents of Devagya on May 10,2010. 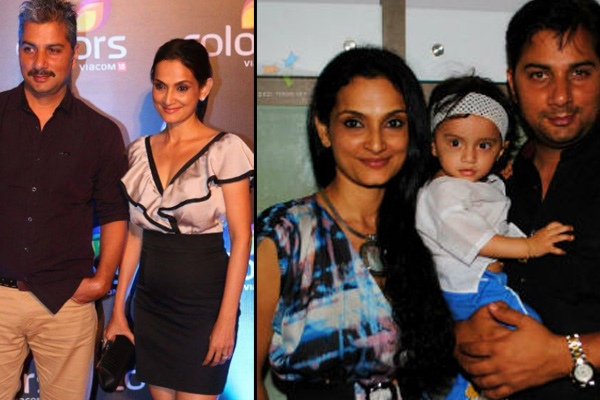 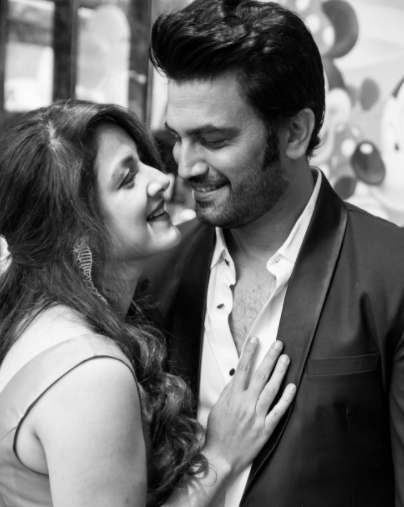 Sharad Kelkar and Keerti Gaekwad’s love story is nothing less than a perfect story with no drama or fights and only pure love. They met for the first time for Doordarshan’s Aakrosh but started bonding on their second encounter on CID Special Bureau. They also participated in Nach Baliye and gave everyone some serious relationship goals. They got married on June 3, 2005 and welcomed their daughter, Kesha on February 7, 2014. 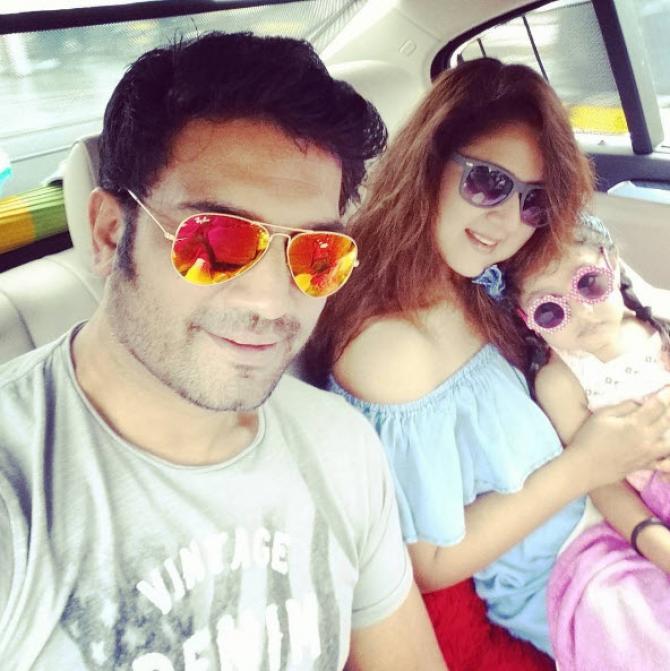 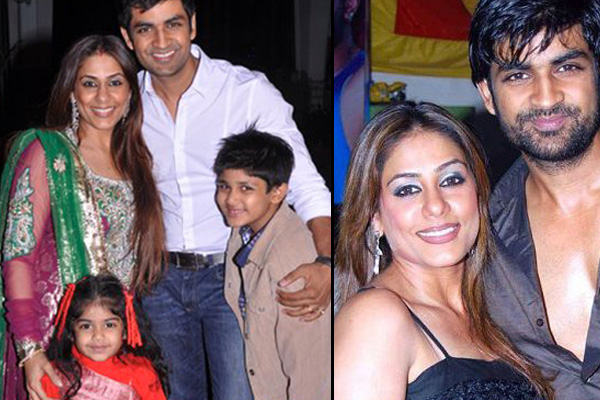 They are known from the very famous Ekta Kapoor’s television show Kasautii Zindagii Kay, and were paired as a couple in the show. They met each other on the sets for the first time and Manish was a big fan of Poonam at that time. They had a very unique proposal in which Manish’s mother proposed Poonam on behalf of him as she was also a big fan of her. They had a big fat Marwari wedding in 2002 and are blessed with two kids, Maliha and Aryaveer. 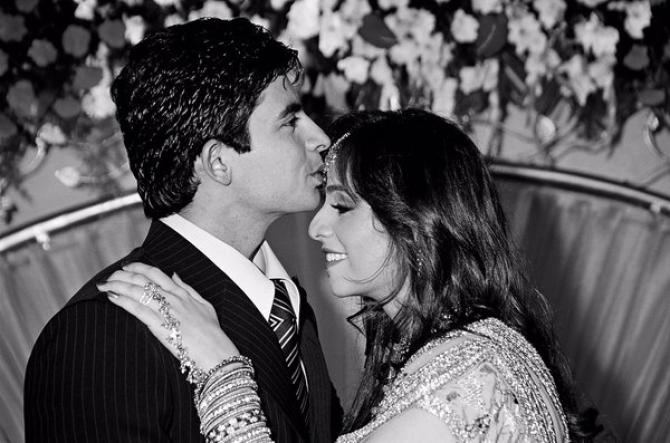 Hussain and Tina dated for 9 years before tying the knot on December 21, 2005 in a Hindu-Muslim wedding. The two met each other had the same friend circle in college and one of their friends played the cupid for them. They supported each other through thick and thin; and are enjoying marital bliss. They are together for more than 20 years now and are truly an inspiration for all the couples. 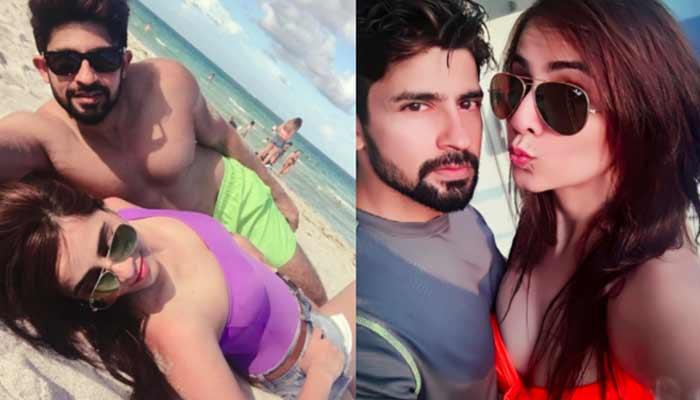 Now don’t you think these ‘heavily sedated with love’ couples reaffirm our faith in holy matrimony and also that those who love each other truly will stand by each other- come what may! We wish them all luck and hope that they always stay together and much in love!