The entire nation has been eagerly waiting for the debut of the internet sensation, Taimur Ali Khan. And if a latest report is to be believed, he will be soon making his debut with his parents. When a child is born in a family of stars, we all start to expect that sooner or later, he/she will also follow the footsteps of his/her parents. From day one, we start to count days when we will hear the official announcement of their big debut on the silver screens. The entire nation’s obsession over Taimur Ali Khan doesn’t need a special mention. Whenever he is spotted outside his house, he is constantly clicked and is being followed by the paparazzi everywhere. Ever since his star parents, Saif Ali Khan and Kareena Kapoor Khan had introduced chote Nawab of Pataudi, Taimur to the world, he has become an overnight star. His stardom has overruled his parent’s stardom and he is considered to be one of the cutest star kids on the block. (Recommended Read: Neha Kakkar Calls Aditya Narayan's Mom, 'Sasu Maa' After She Praises And Accepts Her As Her 'Bahu')

Seeing the humungous stardom of Taimur Ali Khan, we all have been waiting for him to make his big debut and rule the screens with his cuteness. Born to one of the leading star couple, Saif Ali Khan and Kareena Kapoor Khan, who have made their big name in the industry with their talent, Tim is expected to follow their footsteps. The perfect mix of royalty and elegance, Tim’s debut is much awaited, and his fans are eagerly waiting for Saif and Kareena to announce the big project which will be their little munchkin, Taimur’s debut. And guess what, our secret wish will soon be fulfilled. 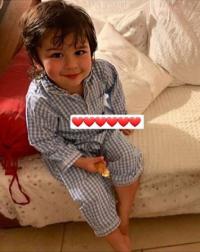 If a Mid-day report is to be believed, Saif Ali Khan and Kareena Kapoor Khan will soon endorse a leading baby care brand. Buzz is that for their first appearance itself at today's event, the duo will be paid a whopping amount Rs 1.5 crore for just three hours. As per the reports, the brand has been trying to get Saif and Kareena to sign the deal for last one year, but the duo had earlier rejected the offer and didn’t sign the deal. But the honchos of the brand were eager to get the royal couple, and after a lot of consideration, the duo has said yes to the deal. 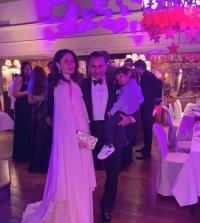 A source revealed to the Mid-Day, “The head honchos of the brand were eager to get Saif-Kareena on board and have been in talks with them for over a year. While their star power was the primary driving factor, one of the reasons for reaching out to the couple was their son Taimur Ali Khan's popularity that cuts across age groups. Although the duo had turned down the offer earlier, they did a rethink when the brand officials persisted over the past few months. It was only recently that they decided to lend their face to the product. They are expected to take home a fat pay cheque of Rs 1.5 crore for a three-hour appearance today." We hope to see little Tim also endorsing the ad with his star parents. (Suggested Read: Janhvi Kapoor Shares A Picture Of Father, Boney Kapoor With Chachu, Anil Kapoor From 'Hum Paanch') 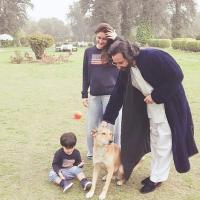 From shutterbugs lined up outside his house to dolls made in his name, Taimur Ali Khan’s popularity doesn’t need any special mention. Media’s constant attention on his son, Taimur has made Saif Ali Khan worried about him. Saif had made an appearance on Arbaaz Khan’s show, Pinch by Arbaaz Khan, wherein, he had talked about Taimur and media’s constant attention on him and had said, “It would be so nice to live in a culture that allowed children to be children. Play in a park and do what he wants...without being a celebrity. Even he has started saying ‘media’. I say where’s the media and he points outside. All of our kids want to join films and I am a little concerned about that. I feel there should be other choices.” 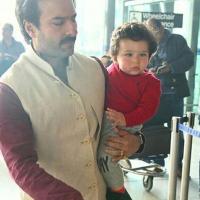 During the show, Saif Ali Khan had replied to a troll’s question about Taimur Ali Khan’s Bollywood debut and had said, “Everyone I speak to, everybody around thinks that all the kids want to join films and they do. Most of our kids want to do that which is a good thing, a great thing but I don't know why I am a little concerned about that. I feel there should be other choices...somebody might want to say I want to become a doctor or a lawyer kind of stuff. Maybe I am sounding very old-fashioned but anyway, I am not interested in making his debut in Bollywood and neither is he (laughs).” 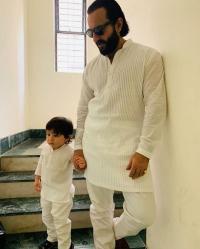 Saif Ali Khan had further added, “This is the way it happens...sometimes they see their parents, everybody in the family is an actor. So, I don't have an issue with anyone doing anything as long as they have a good job and are good people and are well brought up. But there must be so much pressure on my kid also...Like poor Taimur I think will have pressure, like I had to be a cricketer or something. What if he (Taimur) is not interested....Anyway, there's a lot of good wishes for the kid and I would like to thank everyone for that.” (Must Read: Erica Jennifer Fernandes Finally Confirms Being In Love And Shares A Glimpse Of Her 'Mystery Man')

We can’t wait to see Taimur Ali Khan on the silver screens soon! We live in a society, where being seen with a celeb is considered something to be proud of and their fans and followers consider the same to be a badge of pride and honour. We understand the notion behind following your favourite celebs and trying to take a picture with them