Yet again, in an interview of Saif Ali Khan, his little bundle of joy, Taimur Ali Khan unexpectedly made an appearance in the frame and we swoon with his adorable-ness. Check out the video.

The way we had worked over the years has now been completely changed due the pandemic 2020. The schools were shut, so the teachers resorted to online classes. While everyone had struggled to get up early in the morning and run for office, they are now working from home and attending meetings via video conferences. The entertainment industry, which had different outdoor shooting locations are now on a halt and the celebs, who have been attending interviews at media houses, are now giving it via video calls. The movie releases at the cinema halls are now getting a digital release at OTT platforms. That's how, in a gist, our lives have changed in 2020. (Also Read: Ankita Bhargava Pens Note For Six-Month-Old Daughter, Mehr, Asks Her To Be Kind In This Unkind World)

While most of the celebrities have been giving interviews via video calls, Saif Ali Khan too, has been very active and giving a sneak peek into his life post-lockdown. Saif has been frequently giving interviews about how life is post-lockdown, his upcoming projects, entertainment industry, his work, his wife, Kareena Kapoor Khan and their son, Taimur Ali Khan. While their fans have been missing their daily doses of cuteness with the pictures and videos of little Taimur, we have been fortunate to get little glimpses of him when he hijacks his abba, Saif's online interviews. 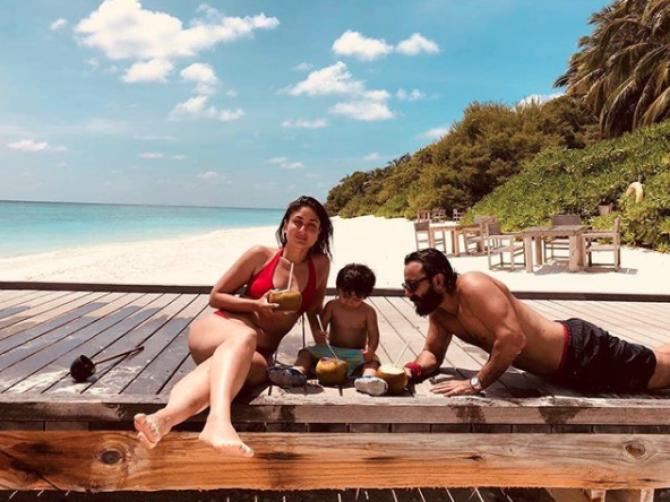 There has been more than one instance when Taimur Ali Khan had delighted his fans with a glimpse on abba, Saif Ali Khan’s online interview. Yet again, in an interview with the journalist, Anupama Chopra, he unexpectedly made an appearance in the frame and we swoon with his adorable-ness. As Taimur entered the frame, Saif apologised for it, but when Anupama complimented baby Tim for being so gorgeous, he replied, “I am not.” When Saif explained to him, “She is saying you are handsome. Say ‘thank you’”, Taimur thanks Anupama for the compliment. Here’s the video:

To make our COVID-19 lockdown bearable and our boring days merrier, a picture of Taimur Ali Khan had gone viral on social media a few weeks back! In the throwback picture, Taimur could be seen attempting a somersault as his abba, Saif Ali Khan had motivated him. Dressed in a red t-shirt and blue denim, baby Tim had looked adorable like a cotton ball. Following his mommy, Kareena Kapoor Khan’s fitness commitment, Taimur has already become the youngest and cutest fitness sensation of B-town. (Also Read: Mahhi Vij Pens A Thank You Note For Her Little Daughter, Tara Jay Bhanushali) 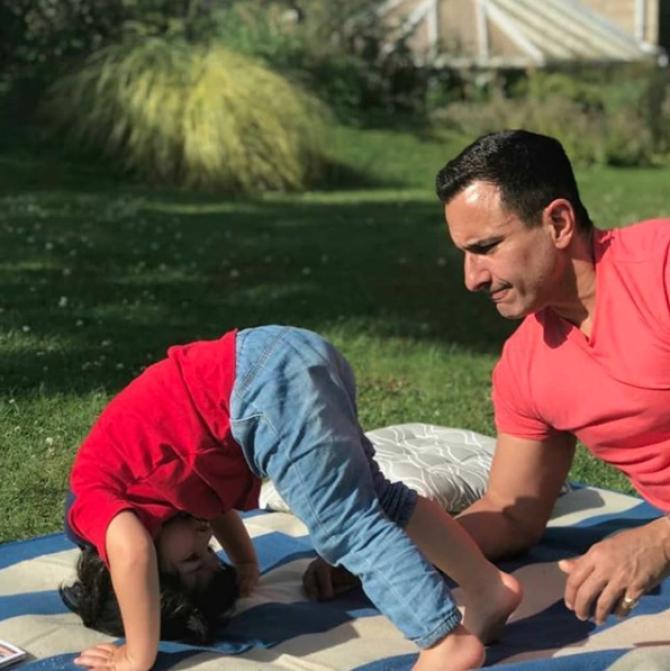 Before the nationwide lockdown, in February 2020, Kareena Kapoor Khan's cousin, Armaan Jain had tied the knot with his ladylove, Anissa Malhotra. But needless to say, it was the groom's nephew, Taimur Ali Khan, who had stolen the limelight from his star Kapoor family. The youngest member of the family, Taimur had taken our hearts away with his oodles of cute charm in a blue kurta by Raghavendra Rathore. The little one's maasi, Karisma Kapoor had posted a family picture in which, baby Tim was busy relishing the cup of ice cream he had in his hand. Saif Ali Khan and Taimur Ali Khan had channelled their painting skills during the lockdown, and it was none other than Kareena Kapoor Khan, who had given a glimpse of the same on social media. As Saif had painted some flowers on the door in their balcony, Bebo had captioned the picture as “When Saif told me he got me flowers, I had a different idea in mind. Quarantine gifts be like...” followed by heart emojis. She had then posted a picture of their in-house Picasso engrossed in painting a wall with multiple colours and had captioned it, “If there is a wall that's blocking your creativity... Try painting on it #QuaranTimDiaries #InhousePicasso.” Wondering what Kareena was doing all this while? Bebo had posted a selfie and had written, “Meanwhile... I just sat there staring in wonder of what was being created. PS: The zit on my face didn’t get the memo of no personal visits and social distancing... #HugeMess.” 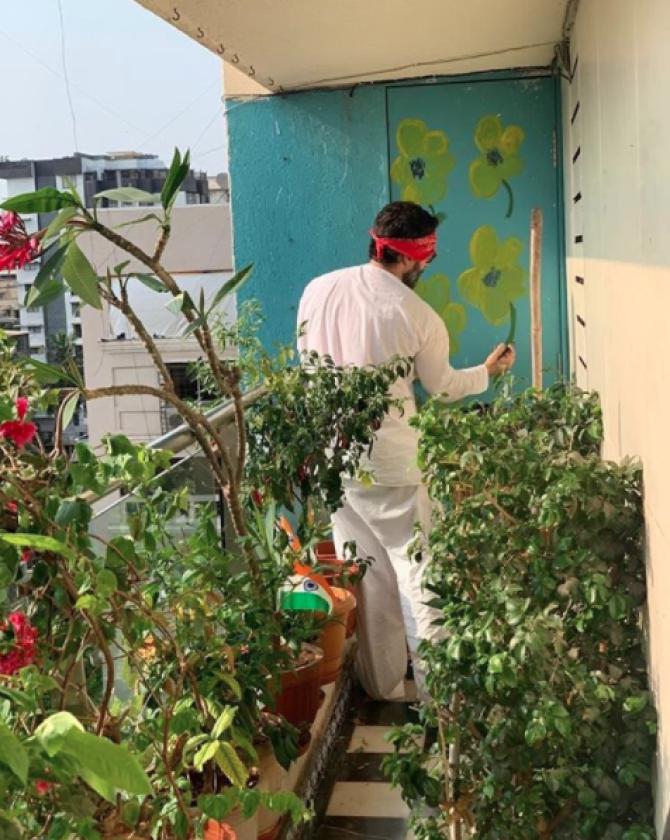 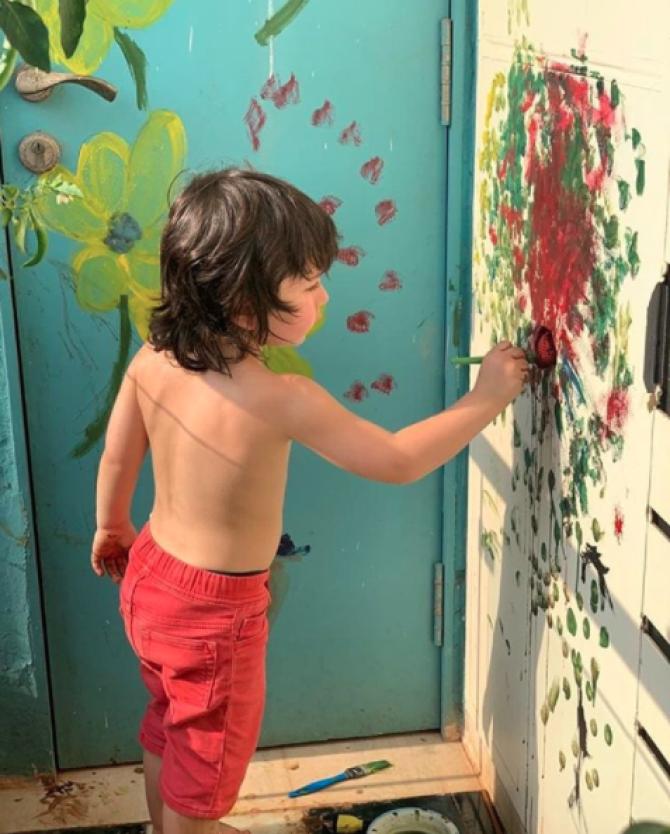 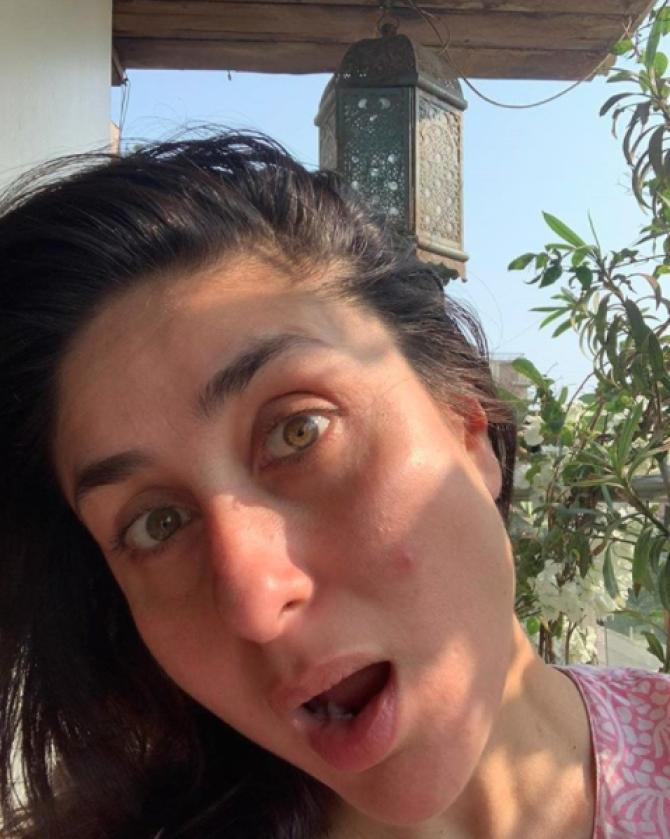 In an interview with India Today, Saif Ali Khan had revealed how his son, Taimur Ali Khan is happy having his family around. Speaking of the silver lining, Saif had said, "He's just happy to have his parents around and that gives us a lot of positivity. We paint and spend time with each other as a family, and that's, like I said, a silver lining in this lockdown. My thoughts are with those less fortunate. As actors, nothing much has changed, we usually spend time alone, by ourselves. The silver lining is having Taimur Ali Khan. There are 150 things to do. But it's important to remember that it's not a holiday, we're all actively fighting a war. We hope that people can work together to make it better." (Also Read: 'Kumkum Bhagya' Fame, Shikha Singh Welcomes A Baby Girl, Announces Her Name Decided On Baby-moon) Watching Taimur after such a long time was indeed a treat for all his fans!