Bollywood actress, Taapsee Pannu posts a heartfelt note for her parents as she misses them on the second anniversary of her Mumbai apartment. Take a look!

The whole world is under lockdown and has started knocking the life-threatening virus, COVID-19 with the rise in the recovery rate all over the world. However, the fight is still on and all we have to keep on going just like this. While everyone is under lockdown, a lot of people are missing their parents because not everyone is lucky enough to be with their parents in this lockdown. So, if you’re with your parents then cherish it because there are tons of people out there, who want to be with their families. One such child is Bollywood’s extremely talented and young actress, Taapsee Pannu, who is living far from her parents with her sister in Mumbai and is missing them badly. (Recommended Read: Parth Samthaan Wishes Rumoured Ex-Girlfriend, Erica Fernandes On Her Birthday, Calls Her 'Cutie')

On the second anniversary of her Mumbai apartment’s grahpravesh, the actress posted a picture with her parents and sister from the same day on Instagram. Along with it, she also wrote a short note in which she explained how much she’s missing them. 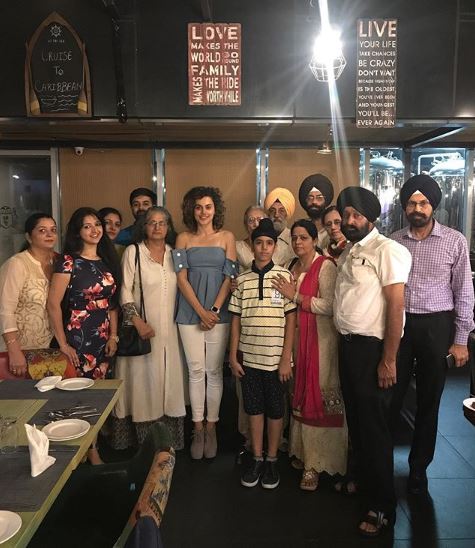 On May 08, 2020, Taapsee Pannu took to her Instagram handle and posted an adorable family picture that includes her mother, father, and sister. The picture was taken two years back on this same date and the occasion was a special one, as it was the grahpravesh of Taapsee Pannu’s new apartment in Mumbai. In the picture, we can see the semi-ready room but wide and proud smiles on the faces of Taapsee’s family. Now, as we all know that Taapsee’s parents are in Delhi and the actress has no choice other than drooling over the old picture. Along with the picture, Taapsee wrote a few lines for her family that can be read as “2 years back the day the family reunited in Mumbai to do the paath at the new apartment. Special occasions call for special gestures and spending that day in a semi-ready apartment with all of us together was memorable. And yes we did get the Kadha prashaad in the end #Throwback #QuarantinePost #Archive.” Take a look! (Don’t Miss: Sonam Kapoor Ahuja Shares Her 'First Picture Together' With Anand Ahuja On Their Second Anniversary) 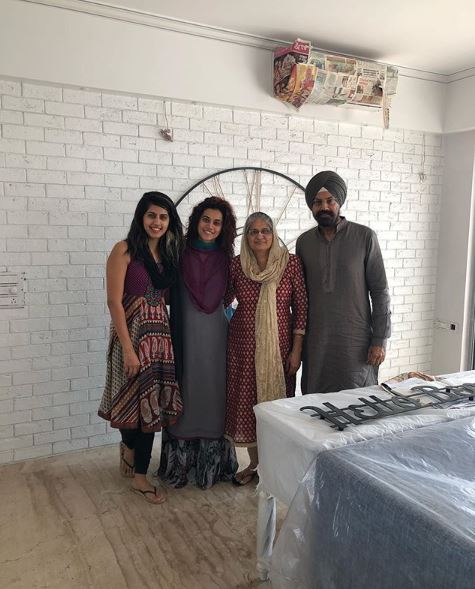 For the uninitiated, Taapsee Pannu is living with her sister, Shagun Pannu in their Mumbai apartment but her parents are living in their Delhi home. Recently, in an interview with the Hindustan Times, Taapsee Pannu had talked about her parents and how she keeps a close tab on the danger zones in Delhi but had confirmed that so far there’s no red zone nearby her Delhi home. She had revealed, “I’m glad that my parents aren’t living anywhere near the hotspot. They’re in their 60s and need to be slightly careful. My dad is retired and mom is a housewife. Most of the time, they stay indoors and would only go out for a walk, meet friends, or visit the Gurudwara or market place nearby. So after the lockdown, it hasn’t affected them the way it has affected us. They seem to be more worried about how we’re coping with it.” In the same interview, Taapsee had talked about the way she’s spending her time in lockdown. She had stated, “We’ve our own Friday night where we watch a nice movie. We plan a dinner party on Saturdays and enjoy sundowners every Sunday. We just try to innovate and do these things to keep ourselves busy.” She had also revealed that she does a lot of workout in quarantine but doesn’t like to post pictures or videos of her workout sessions as she had explained, “I’ve downloaded a few cognitive and meditation apps, and also do reading exercises to keep myself mentally busy. Physical workout keeps going on at home, but I don’t post pictures or videos of it as I hate getting filmed during that time. I feel it’s not a pleasant sight. Even in the gym, I blur out others around me and just focus on my exercise.” (Also Read: Riddhima Kapoor Sahni Shares A Picture With Neetu Kapoor And Ranbir Kapoor With An Emotional Caption) How are you spending time in quarantine? Let us know!