Bollywood actor, Suniel Shetty shared a beautiful monochrome picture of his daughter, Athiya Shetty on her birthday. Take a look!

Bollywood actor, Suniel Shetty was one of the most popular actors of his era and often regarded by many as the first modern action hero of Indian cinema. Not just that, the actor has maintained himself with his strict fitness regime, and as a result, he can give any young actor a run for his money with his looks and tremendous acting skills. Talking about his personal life, the actor shares a beautiful bond with his kids, Ahan Shetty and Athiya Shetty. But just like every father on this planet, Suniel Shetty's bond with his daughter is some inches higher than his bond with his beloved son. (Recommended Read: Arpita Khan Looks Like A Princess In Red For Karwa Chauth, Breaks Fast By Looking At Her 'Chaand')

Now, on his daughter, Athiya Shetty's 28th birthday, the doting daddy has shared an unseen stunning black and white portrait of his daughter along with a tear-jerker note. Scroll down to see it all! On November 5, 2020, Bollywood actor, Suniel Shetty took to his Instagram handle and shared a beautiful monochrome picture of his gorgeous daughter and actress, Athiya Shetty to wish her on her birthday. In the picture, the birthday girl looked stunning; however, it was her dearest daddy's emotional note in the caption that won everyone's heart in split seconds on the internet. The doting daddy, Suniel Shetty wrote "TIA .... where my LIFE begins, and LOVE never ends .... happy birthday my baby ... I thank life every day for giving me the gift of YOU" in the caption. Take a look: (Don't Miss: Kareena Kapoor Khan Continues To Flaunt Her Love For Kaftans, Shows Off Her Baby Bump) Suniel Shetty is a hands-on father and the one, who never shies away from expressing his emotions on social media. For instance on September 27, 2020, i.e., Daughter's Day, the daddy cool had taken to his IG handle and had shared a beautiful video montage of pictures and some clips from his and Athiya's memory lane. But once again, it was his note in the caption that had made us cry, and it could be read as "The honour of being a father to a DAUGHTER is one of the greatest experiences a man can have ... if only every daughter could see herself thru her father's eyes....HAPPY DAUGHTERS DAY TIA. #happydaughtersday." Soon his daughter, Athiya Shetty had also dropped a reply to her father's efforts as she had written, "love you, papa!" in the comments. 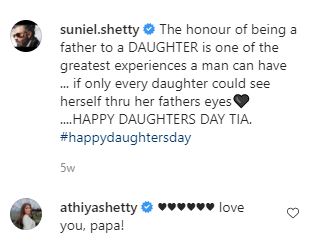 On August 11, 2020, Athiya Shetty had taken to her Instagram handle and had wished her father, Suniel Shetty on his birthday with a cute picture and video from her childhood days. In the photo, we could see little Athiya getting a peck of love from her dearest daddy, while in the video, we could see a teenage Athiya sitting on her dad's shoulders and dancing on the song, Shava Shava. Along with this, Athiya had written a caption that had won the internet. Her caption could be read as "To my wisest teacher, greatest protector, toughest workout buddy and my best friend, happy birthday! love you papa, nobody can match the size of your heart. @suniel.shetty." (Also Read: Shilpa Shetty Kundra Observes 'Chalani Rasam' With Hubby, Raj Kundra, Reveals He Also Fasted [Video])

Athiya Shetty Reacts On Reports Of Her Wedding With Beau, KL Rahul And Moving In With Him 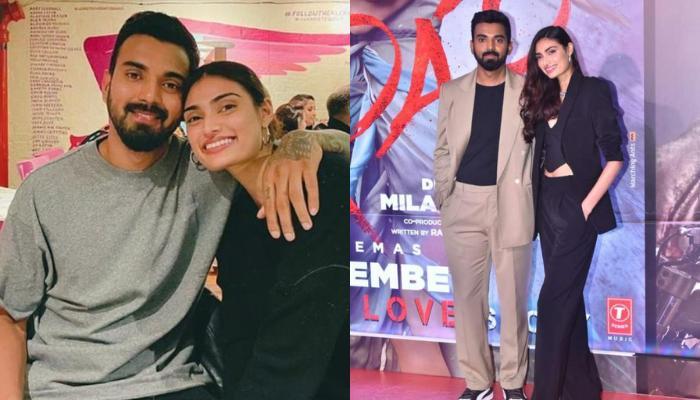 The Bollywood-cricket couple, Athiya Shetty and KL Rahul have been dating each other for quite some time, but the much-in-love couple had kept it under the wraps entirely for a long time before making an official appearance at Ahan Shetty's film, Tadap's premiere. Now, they often share mushy posts with