To mark her cousin, Alia Chhiba's birthday on January 17, 2021, Suhana Khan posted unseen photo and videos. The IG stories spoke volumes of their love and admiration for each other.

While the star parents are busy setting the silver screens on fire with their phenomenal performances, their little ones had made social media a sheer delight for their fans by posting glimpses of their personal lives. Thanks to the fan pages and paparazzi, their private lives are already recorded as they are subjected to the limelight and constant media scrutiny, whether they like it or not. Some celeb kids have made their social media accounts public to give their fans glimpses of their personal lives. From Suhana Khan, Aryan Khan, Navya Naveli Nanda to Agastya Nanda, in 2020, a lot of celeb kids have made their IG accounts public, giving sneak peeks into how they are in their real life. (Also Read: Kareena Kapoor Khan Twinning With Her Sister-In-Law, Saba Ali Khan Speaks Volumes Of Sisterhood Bond)

It was in March 2020 when Shah Rukh Khan and Gauri Khan’s daughter, Suhana Khan had made her Instagram account public and it had lovely pictures of her brothers, Aryan Khan and AbRam Khan, proving the slang, ‘bros before hoes’, just right! However, she deleted many of the pictures later. Suhana had not only used the social media platform to give larger-than-life glimpses of her personal life, but also raised her voice to bring a change in the society and spread awareness by sharing her experience with colourism. When Gauri was asked to comment on Suhana opening up on her experience with colourism, the proud ma had said, "I think it is time we stop discriminating on the basis of the colour of our skin, and I am proud of her for standing up for herself."

Suhana Khan Wishes AbRam Khan On His 8th Birthday, But It Is She Who Is Showered With Love In Video

Suhana Khan's 21st Birthday Celebration And After Party Glimpses, Grooves With Her Girls In New York Other than Shah Rukh Khan, Gauri Khan, Aryan Khan and AbRam Khan, there’s another special person in Suhana Khan’s life, who often makes an appearance on her Instagram handle. And that person is none other than Suhana Khan’s cousin, Alia Chhiba, daughter of Gauri Khan’s brother, Vikrant Chhiba. To mark Alia’s birthday on January 17, 2021, Suhana posted unseen photo and videos on her Instagram stories. In the first video, Suhana flaunted her chiselled physique in a printed crop top and blue denim while Alia sported a black dress. Suhana captioned the video as "Happy birthday to my sisterr @aliachhiba." The second IG story was a throwback picture of Suhana and Alia from their Dubai vacation and the sisters-duo sported masks with their stunning outfits. The next throwback video has Suhana showering kisses on Alia as they flashed ear-to-ear grins with their party mode on! For the Indian Premier League 2020, Shah Rukh Khan, Gauri Khan, Suhana Khan, Aryan Khan and AbRam Khan had jetted off to Dubai and were accompanied by Alia Chhiba. Alia and Suhana had posted glimpses of their vacation on their respective social media handles. When the Khan family had returned to Mumbai post the series, Suhana had missed her cousin, Alia. Suhana had taken a dig on her height and posted a throwback picture from Dubai with Alia. Suhana had written, “My head’s cut off bc I’m too tall. Miss you @aliachhiba” atop it. Alia reposted the story and had written, “Miss you” followed by a rainbow and pink-heart emoji. (Also Read: Mira Rajput Kapoor Cheers For Hubby, Shahid Kapoor As His Upcoming Film, 'Jersey' Got A Release Date) Do you know that Suhana Khan had borrowed this aqua-blue printed dress from her mother, Gauri Khan? A few weeks ago, Suhana had posted a picture of herself, flaunting this gorgeous dress by the designer, Diane von Furstenberg which costs Rs 35,750, and revealed in the comments section that she had borrowed it from Gauri. Suhana had captioned her post as “Gonna post this before i stare at it long enough to start hating it.” When one of Suhana’s friends, Athena Browning had complimented the outfit and commented, “I want that dress!!!,” Suhana had replied, “@athena_browning it’s my mums.” 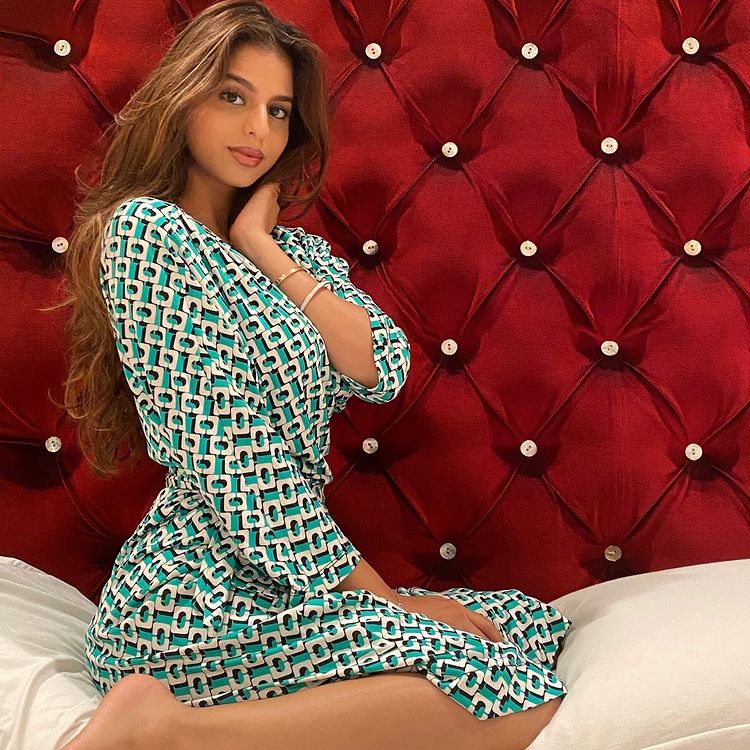 In May 2019, Gauri Khan and Suhana Khan had attended the wedding of Alia Chhiba in Kolkata. The mother-daughter duo had made heads turn in their gorgeous outfits. For one of the functions, Suhana had picked an olive-green saree-style ensemble, draped over a rust-orange ombre halter blouse which she had accessorised with statement oxidised earrings adorned with maroon stones. Gauri had looked graceful as ever in a scarlet embellished saree, styled with shoulder-grazing earrings and a classic low bun. For Alia’s mehendi ceremony, Suhana had opted for a shimmering mint green kurta set which was accessorised with a minimal pendant and chunky earrings. (Also Read: Virat Kohli Changed The Bio Of His Twitter Handle After Welcoming Baby Girl And It Is Too Adorable) 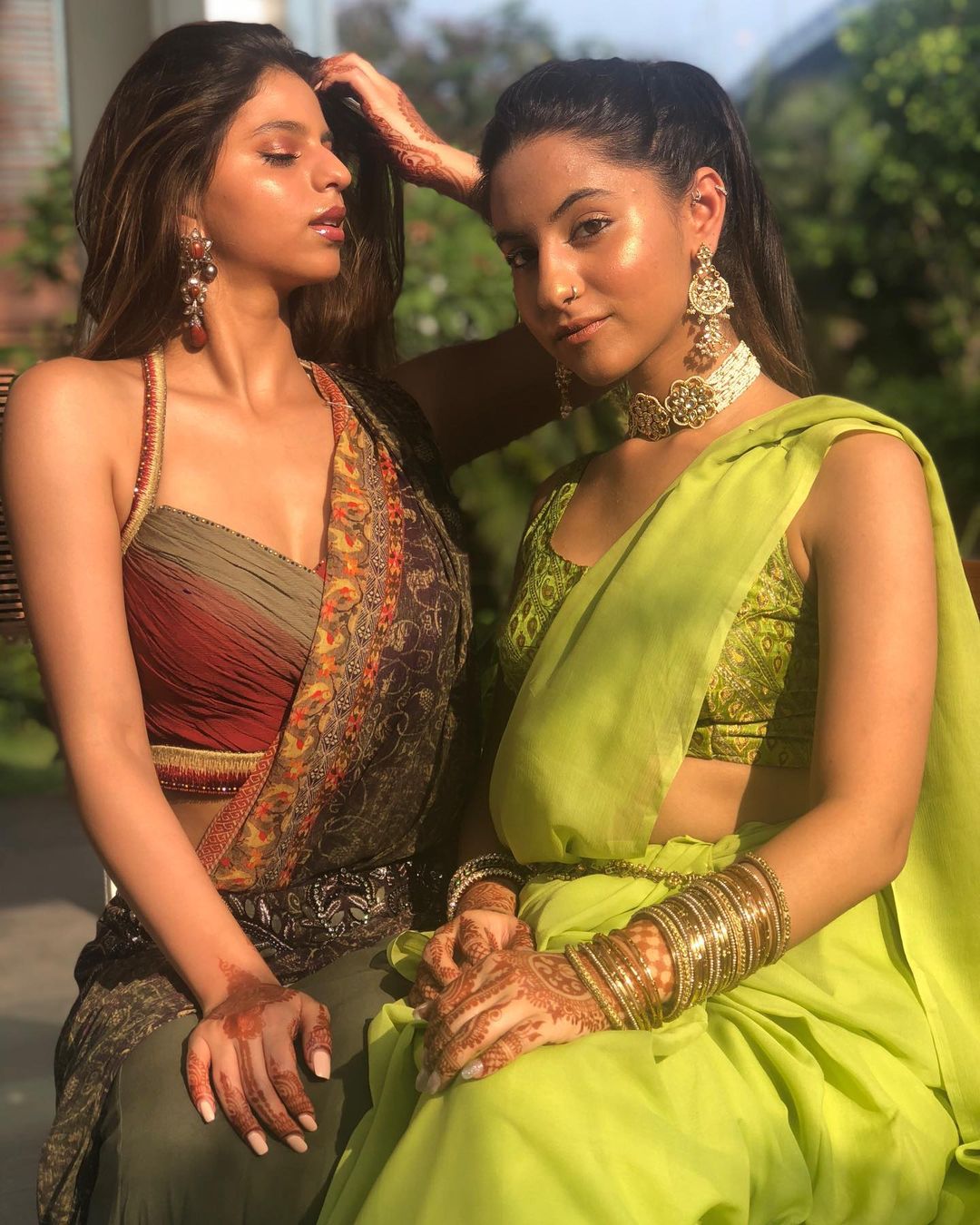 Suhana Khan Wishes AbRam Khan On His 8th Birthday, But It Is She Who Is Showered With Love In Video