It was on January 29, 2021, when Shah Rukh Khan was snapped at the airport as he had come to see off Suhana Khan. Now that she touched down in NYC, she treated us with a beautiful view from her room.

As we near the end of the winter season, it makes us enjoy and cherish the snow and ice, the cold mornings spent cosily in wrapped in our warm blankets, the pure joy of soaking sardi ki dhoop, bonfires and old monk; a lot more than ever. For the places where it snows, they have an extremely different experience with the heavenly sights and the picturesque views as we look outside our windows and the winter wonderland is indeed a treat to our eyes. As Shah Rukh Khan and Gauri Khan’s daughter, Suhana Khan moved back to the US since the universities are reopening slowly amidst the pandemic, she gave a glimpse of the view from her room. (Also Read: Saif Ali Khan Reveals His Favourite Corners In Their 800-Crore Worth Pataudi Palace, Shares A Regret)

It was on January 29, 2021, when Shah Rukh Khan and AbRam Khan were snapped at their airport by the paparazzi from a distance when they had come to drop off Suhana Khan. While it was an adorable moment to see Shah Rukh hugging Suhana goodbye and walking her till the entrance gate, it was the swanky red convertible car that had grabbed our attention. While Shah Rukh had sported an army green jacket over a t-shirt and denim, Suhana had opted for a denim jacket and black pants with white shoes. After bidding goodbye to Suhana, Shah Rukh had returned to his car and driven off with AbRam sitting beside him.

Last year, before the lockdown was imposed, Suhana Khan had returned to Mumbai to be with her family amidst the pandemic. Now that Suhana had touched down in New York City, she treated her fans with a beautiful view outside her window. Giving a glimpse of her ‘room with a view’, Suhana posted a two-second video of the snowy time in NYC. Here’s a screenshot of the same: 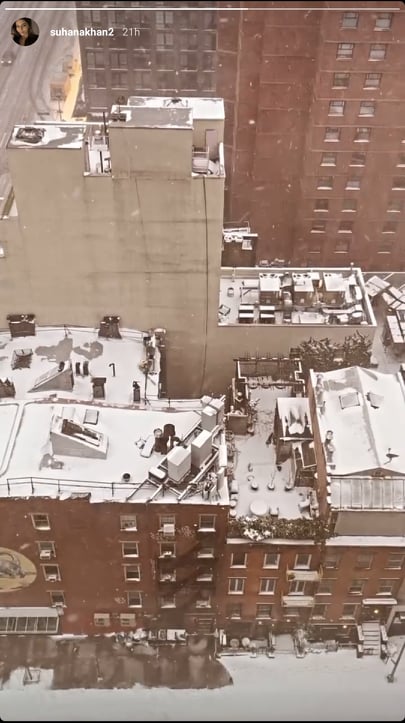 Before jetting off to NYC, Suhana Khan had partied the night off with her besties, Navya Naveli Nanda, Ananya Panday and Shanaya Kapoor. The girls had posted pictures from their night out on their respective IG handles. But before we move on to the captions they had written, let’s decode their sartorial picks for the night. Suhana had opted for a lilac bodycon dress with a strapless neckline that clung to her body and showed off her gorgeous curves. Navya had picked a ruched silk strapless mini and layered it with a contrasting pink cardigan. While Ananya had sported a simple black bodycon dress, Shanaya opted for a printed mini dress with full sleeves and mesh details. Yet again, the girls had made heads turn with their sartorial picks. (Also Read: Vinod Mehra's Daughter, Soniya Mehra Rubbishes The News Of Quitting Bollywood, Reveals She's Engaged) 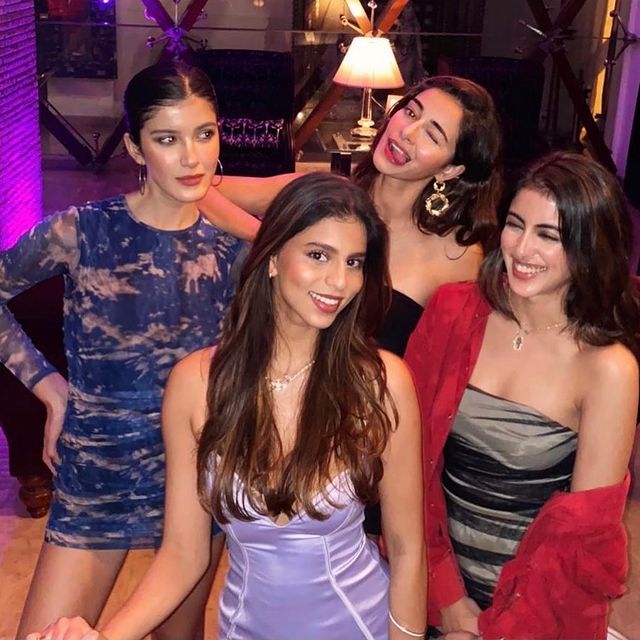 Ananya Panday and Navya Naveli Nanda had posted a throwback picture with Suhana Khan and Shanaya Kapoor, when they were kids and another picture from their night out. While Navya had written, “How it started vs How it’s going!!" Ananya had captioned it as “Nothing really changes (except I don’t bite Suhana’s head anymore...ok maybe I do sometimes).” Suhana and Shanaya posted the same stunning pictures from their night out and while the former had captioned it as “Just me being the main character lol”, Shanaya had written, “Alexa play Ariana Grande.” Shah Rukh Khan had revealed in various interviews that his eldest son, Aryan Khan has no interest in acting and wants to stay behind-the-camera. But his daughter, Suhana Khan aspires to be an actress and she even indulges in college plays and drama. While there are many such zillion pictures of Suhana on her fan pages that made us want to add in here, the one we are about to show is proof of how we can foresee her as an amazing actress. Proving acting is in her genes and that she will follow her superstar father’s footsteps, Suhana had taken part in a college play and if the following picture is anything to go by, she would have nailed the performance like a pro. Dressed in a white vest paired with black trousers and a black cap, Suhana’s expression in the still had made our wait for her debut even more difficult. (Also Read: Janhvi Kapoor Talks To Kareena Kapoor Khan About Struggles That Her Parents' Generation Never Faced) 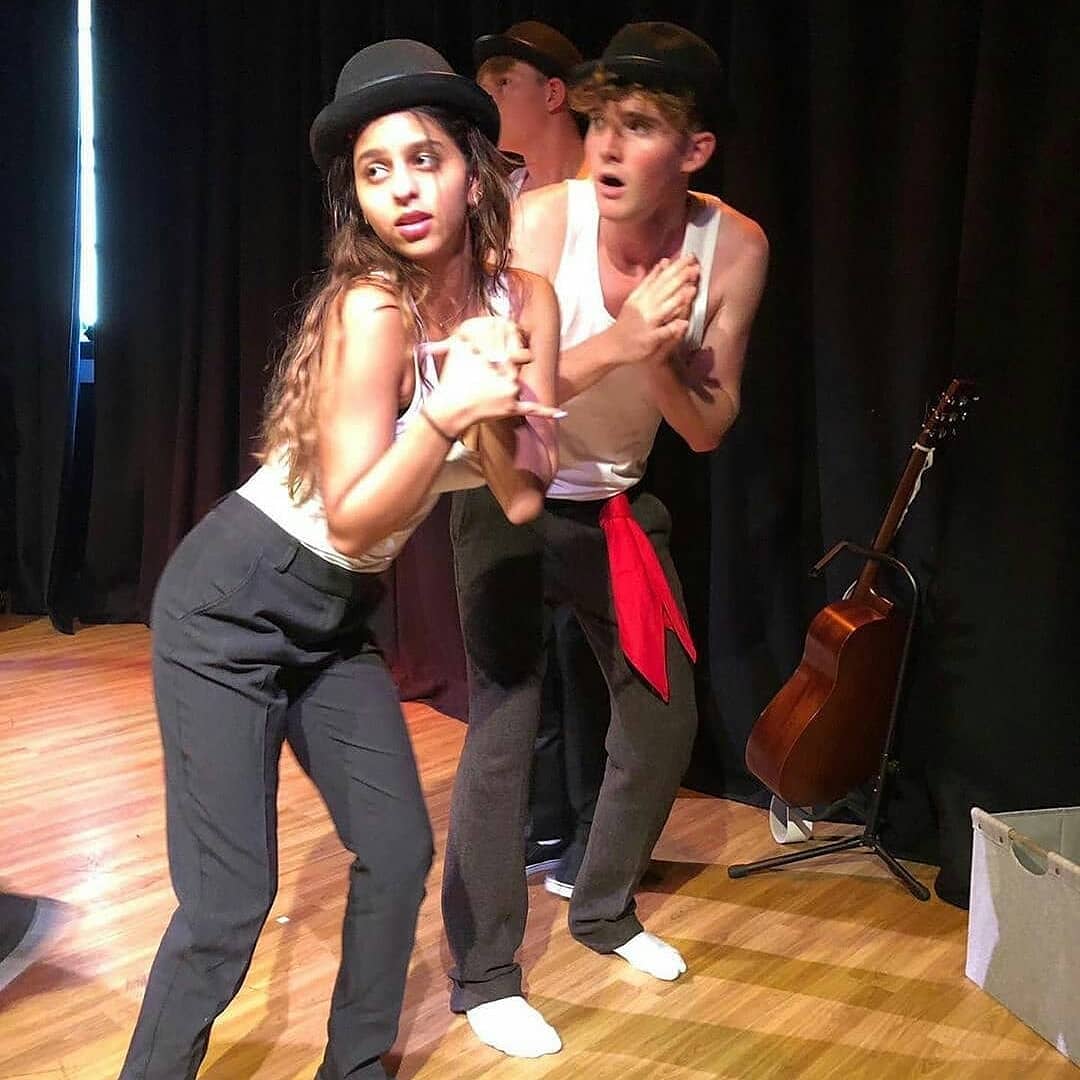 We can’t wait for Suhana’s debut! Suhana Khan is the daughter of the famous Bollywood superstar, Shah Rukh Khan and celebrity interior designer, Gauri Khan. Suhana is King Khan's only daughter, along with his two sons, Aryan Khan and AbRam Khan. And just like her daddy, she is also an internet sensation. Suhana Khan has frequently made it