Sonam Kapoor Ahuja has always managed to awestruck her fans with her sense of fashion. Recently, she shared a throwback picture and proved that she has been a fashionista since childhood.

The best memories of childhood are the moments spend with our siblings. No matter how crazy those days were, we always look back and cherish those carefree days. Those never-ending fights and then patching up over an ice-cream are some of the most memorable days which we always wish to live again. While looking through our family album, we always take a trip down the memory lane while glancing at our throwback pictures and one such adorable picture is shared by Bollywood’s fashionista, Sonam Kapoor Ahuja with her sister, Rhea Kapoor. (Also Read: Rana Daggubati's 'It's Official' Photos With Miheeka Bajaj From Their Roka Ceremony Exude Happiness)

Sonam Kapoor shares a warm bond with her sister, Rhea Kapoor, and has often stated Rhea as her emotional anchor. Often considered as the boss lady, Rhea Kapoor is known for her amazing out of the box fashion sense. She is known for turning her sister, Sonam into a fashionista. Sonam and Rhea never shy away from showing their love for each other and their respective social media handles are proof of the same. From birthdays to other important events, they love sharing pictures with each other and had even launched a clothing brand together in 2017. 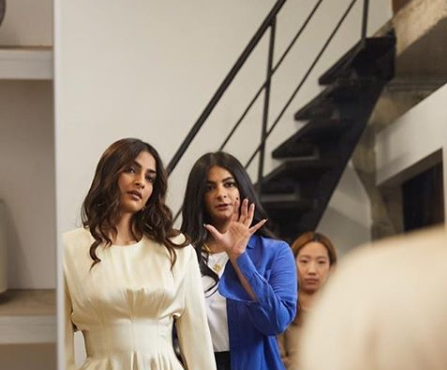 Sonam Kapoor is known for her out of the box style statement in the glamour world. On May 21, 2020, Sonam took to her Instagram handle and shared a throwback picture with her sister, Rhea. In the picture, Sonam was seen wearing a self-made batman costume to a party that gave us a glimpse of the fashionista in her. Along with the picture, she wrote, “DIY Batman costume for a party that wasn’t fancy dress because he was my favourite superhero. Also jumping and dancing with my @rheakapoor is still my favourite thing to do. (Yes those are batman socks and yes I was a nerd).” Amidst the lockdown, everyone is stuck at home and are not able to meet friends and family. Sonam Kapoor, who is spending the lockdown in Delhi with her hubby, Anand Ahuja is missing meeting her family and friends. On April 27, 2020, Sonam had taken to her Instagram handle and had shared a gorgeous picture of herself with sister, Rhea. Along with the picture, which had given major sibling goals, Sonam had written, “Sister sister” followed by a heart emoticon. (Also Read: Milind Soman's Wife, Ankita Bashed A News Agency For Publishing False Reports About Her Marriage) On March 5, 2020, Rhea had turned a year older and Sonam had taken to her Instagram handle and had shared a beautiful video with their throwback pictures. Along with the video, Sonam had shared a heart-melting birthday wish, which could be read as “From sharing our toys, to sharing secrets, you've been my best friend and my confidante. Not only are you my anchor but you also inspire me and everyone around you in so many different ways every single day! Happy birthday to the most strong, caring, powerful, and honest person I know! Love you long time!”

Sonam Kapoor and Rhea Kapoor have always been each other’s support system and love sharing throwback pictures from their childhood days. On April 7, 2020, Rhea Kapoor had taken to her Instagram handle and had shared a throwback picture of herself with her darling sister, Sonam Kapoor. In the picture, both Sonam and Rhea had looked cute as buttons. Along with the lovely picture, Rhea had written, “Partner in everything. Highly eccentric and uncontrollable? Yes. But delightful, loving, protective, generous and loyal and best friend for life. #bigsister #muse.” On Rhea’s picture, Sonam had commented, “Look at the way I’m holding you.” (Also Read: Arjun Kapoor Talks About Life After Mom, Mona Kapoor's Demise, For Six Years No One Touched Her Room) Well, we loved Sonam’s Batman costume? What about you? Keep us posted.