It was Mother's Day yesterday on May 12, 2019. Sonam Kapoor Ahuja wished her mother-in-law, Priya Ahuja with the most heartfelt words. Sonam and her MIL, Priya Ahuja share a friendly bond.

The most pious and sacred relationship that we ever share in our lives, is always with our mothers. To even think to match up to our mothers' sacrifices for our happiness, is a sin. Her love for us is priceless and we would forever be indebted to them. And it was Mother's Day yesterday, on May 12, 2019, a day celebrated internationally to pay tribute to our mothers. And our Bollywood celebrities left no stone unturned to make us all emotional with their Mother's Day posts. (Also Read: Shloka Mehta-Akash Ambani, Anant Ambani-Radhika Merchant Bring The IPL Trophy Home After MI's Win)

Many Bollywood celebrities took to their social media handles to share heartwarming posts for their mothers. Sonam Kapoor Ahuja was one such actress who paid a tribute to her mother, Sunita Kapoor yesterday with an emotional post. The 34-year-old actress had shared a throwback picture with her mom. First, take a look at the picture: 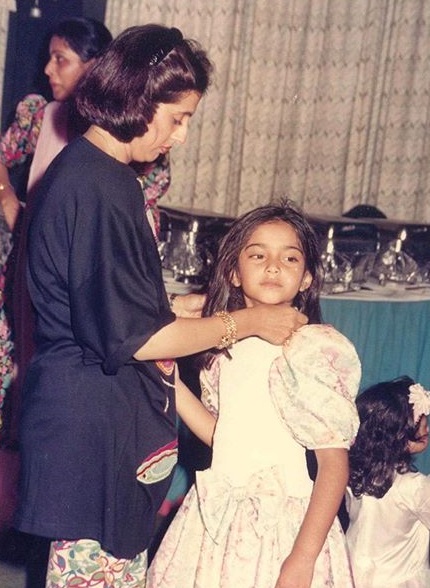 Sonam had written on Instagram, "Happy Mother’s Day to the most loving and special person in my life. You are my strength and grace, my heart and courage. Mom, I love you so much, one day a year doesn’t even begin to sum up how important you are to me and to our whole family. @kapoor.sunita #MothersDayEveryday." 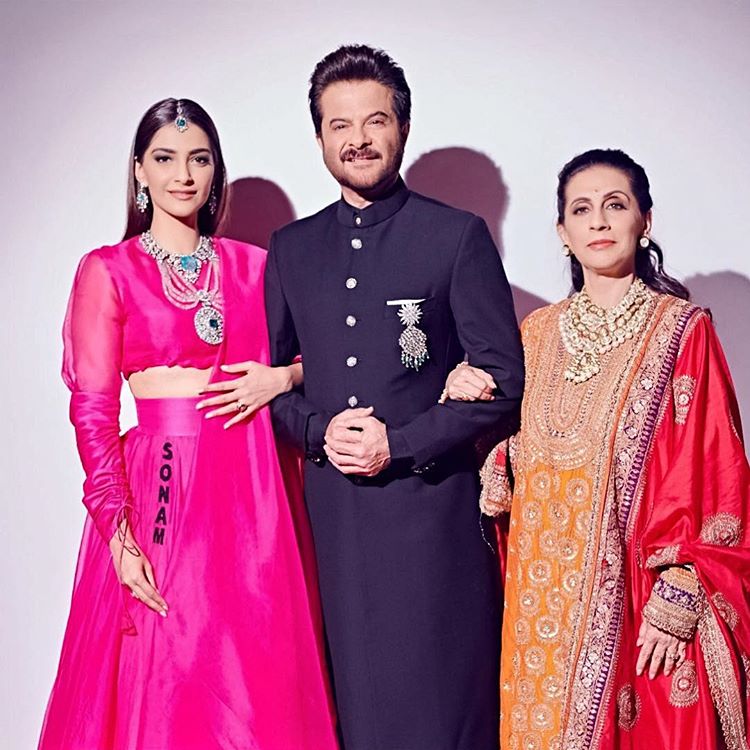 Sonam Kapoor Ahuja's Mother's Day post was sweet but her next post was the sweetest, and it was for her mother-in-law, Priya Ahuja. Calling her mom-in-law 'selfless' and seeking her blessings, Sonam shared the following pic and wrote, "Happy mamas day to the most elegant, kind and loving person I know... I love you mom.. thanks for being so selfless. Anand and I are together because of your prayers and blessings.. love you lots! @priya.ahuja27 @priya27ahuja." This only goes to show that the equation that Sonam shares with Priya Ahuja is no less than what she shares with Sunita Kapoor. 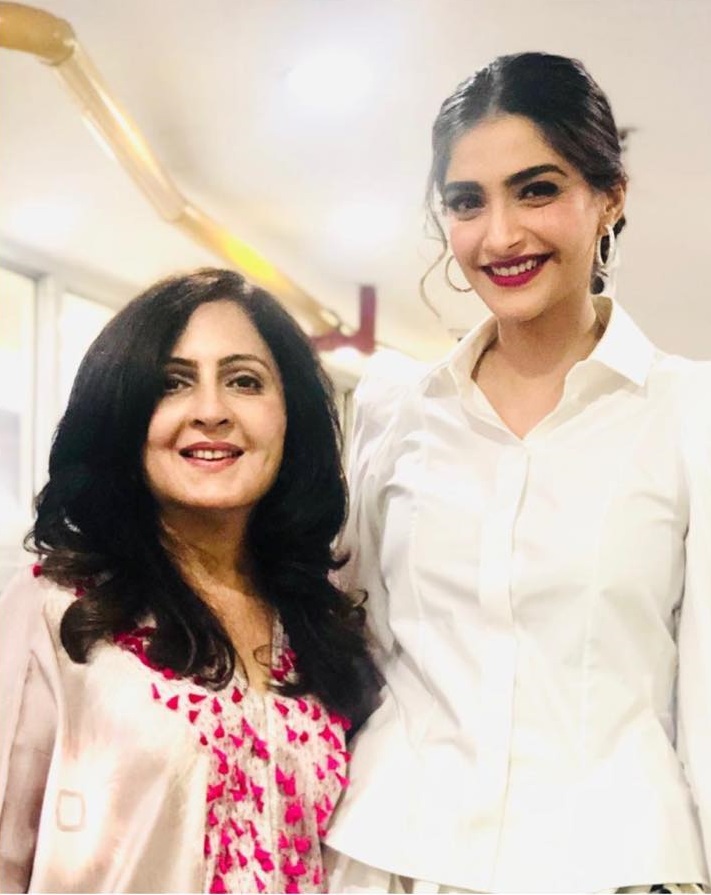 Sonam Kapoor Ahuja and her saasu-maa, Priya Ahuja share a friendly bond with each other, and we saw that last year. From September 21, 2018, till September 23, 2018, it was Isha Ambani and Anand Piramal's engagement bash at Lake Como, Italy. And guess what? Sonam K Ahuja had worn an elegant lehenga gifted to her by her mother-in-law, Priya Ahuja. In the picture, Sonam was all-smiles with her hubby, Anand and beautifully captioned it as, "Wearing my birthday present by @priya.ahuja27 thanks so much mom! I felt like a princess! by @kapoor.sunita (love you)." 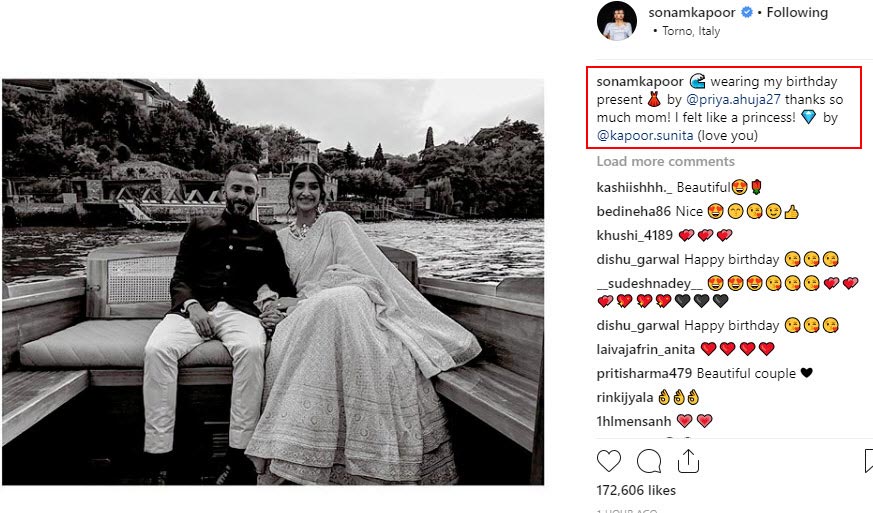 Sonam had once shared in an interview that she is obsessed with her mother-in-law. Sonam had told Deccan Chronicle, “They are Sindhis and are a very private business family. They are lovely people but I don’t want to discuss much. I am obsessed with my mother-in-law; I get along very well with her. As they are not from the film industry so let’s not talk much about them. I have been dating Anand for so long. I like saying that he is my husband but I am so used to calling him, my boyfriend. It’s fun being married.” (Don't Miss: Deepika Padukone's Mother, Ujjala Padukone Tries Her Stint In Acting, Shares A Video On Mother's Day) 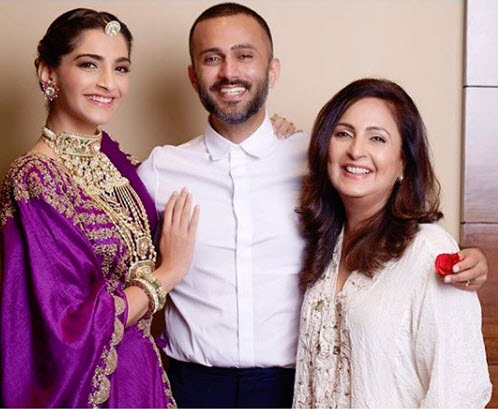 Sonam Kapoor Ahuja got married to her long-time beau, Anand S Ahuja on May 08, 2018. Before that, they were in a long-distance relationship, as Sonam resides in Mumbai and Anand lives in London. Even after taking the nuptial plunge, Sonam and Anand are blissfully enjoying their long-distance marriage. The Neerja actress once said in an interview, “We both have to manage. I think we both respect each other’s work and space; we are partners in the true sense. For me, nobody is more important than Anand and for him, nobody is more important than me. When you have mutual respect, things get easy.” 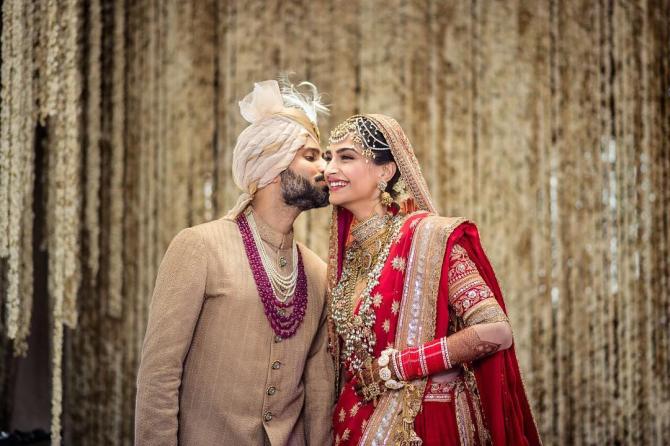 Coming back to Sonam and her mother, Sunita, do you know that Sonam had worn everything of her mother's on her wedding day? Hairstylist and makeup artist, Namrata Soni, had shared with a media portal, "Everything was her mother’s. Every single piece of jewellery that she wore was her mother’s. Her mother is one of the most amazing jewellery designers and every single piece was better than the other. I honestly don’t know which one I loved more." Sonam's life has changed for better post her marriage with Anand. Sonam had said in an interview last that her hubby and she are very professionally compatible, “Anand is so encouraging when it comes to my work that he didn’t blink when I told him I was flying to Cannes two days after the wedding or that I was getting into promotions straightaway. There was no argument, just acceptance—you got to do what you got to do. But he posed one question to me: ‘If it was me who had to go to a work meeting right after the wedding, what would you do?’ I said I’ll kill you. So he’s like, ‘I think it’s double standards!'" (Must Read: Deepika Padukone's Mother, Ujjala Padukone Tries Her Stint In Acting, Shares A Video On Mother's Day) 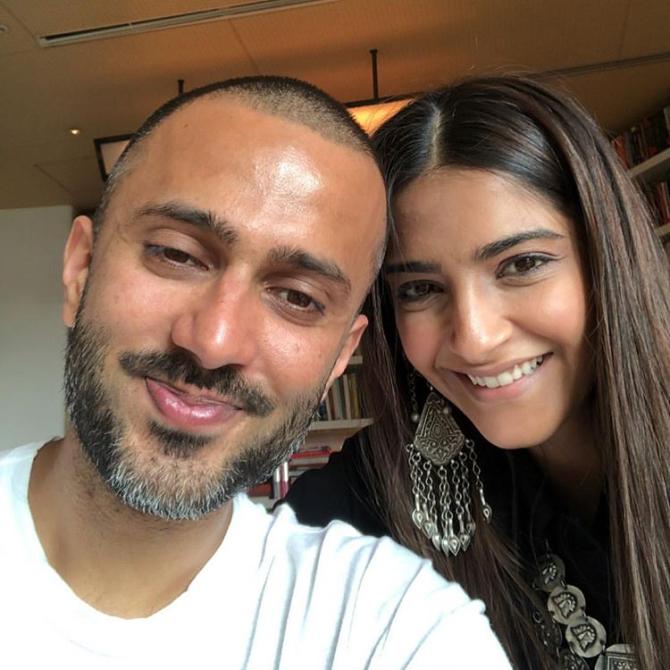 Sonam Kapoor Ahuja's Mother's Day post for her mother-in-law is too sweet to miss, right? How did you wish your mothers yesterday? Share with us!