A few moments back, Shilpa Shetty Kundra was spotted with her daughter, Samisha Shetty in twinning outfits. Check it out!

Bollywood actress, Shilpa Shetty Kundra, and her husband, Raj Kundra had adopted their daughter, Samisha Shetty Kundra, in February 2020. Ever since then, their little munchkin is ruling millions of hearts with her cuteness and innocence. From her generous gesture for a bird to her adorable antics, Samisha always proves that she's a little bundle of joy.

On Samisha's second birthday, Shilpa had taken to her Instagram handle and had posted an adorable video of her baby girl. In the video, we could see Samisha fighting with her daddy, Raj and telling him that Shilpa is her mommy. She was even seen showering kisses on her mom. Alongside it, Shilpa had written:

"MINE! YOU came into our lives and brought us so much happiness even then, we can never have enough of it. Thank youuuu for filling our hearts with love and joy, my precious darling Samisha. I loved you before you took your first breath and promise to protect you till my last breath. Happy birthday Samisha, our little baby is 2."

On February 19, 2022, the paps spotted Shilpa Shetty Kundra, holding her daughter, Samisha in her arms. Pictures and videos from the same are doing rounds on the internet and are winning hearts. In the video, we can see the mother-daughter duo twinning in white outfits and looking adorable together. While Shilpa looked stunning in a white tank top paired with a white jacket and a pair of jeans, Samisha donned a white top and cream pants. However, it was the little munchkin's side ponytail adorned with a white bow, that stole the show for us! Check it out below:

On February 15, 2022, Shilpa Shetty Kundra had celebrated her daughter, Samisha Shetty Kundra's second birthday with family in Alibaug. Shilpa had taken to her Instagram handle and had posted a cutesy IG story of Samisha's birthday celebrations. In the first video, we could see a glimpse of Samisha's teddy-themed cake and the decor around it. We had also got a glimpse of Samisha twinning in a white mesh frock with her brother, Viaan.

Also Read: Mira Rajput Looks Pretty As She Repeats A Dress, Which She Bought For One Of Her Anniversaries On January 12, 2022, Shilpa had posted a video with her daughter, Samisha. In the video, we could see Samisha asking her mother what has happened to the birdie. To which, Shilpa had said that the bird was injured. After which, Samisha had started praying, and she had also recited the Gayatri mantra.

Along with it, Shilpa had penned a note and had talked about how kids know the true meaning of prayers. She had written:

"Kids truly have the purest hearts. It’s amazing to see Samisha (who is not yet 2) feel compassion & empathy, and instinctively know when someone needs prayer and some unconditional love. The power of prayer and faith makes the world go round. Wish we remember that more as grown-ups." We are in love with this mother-daughter duo. What about you? Let us know!

Next Read: Shikhar Dhawan Reveals He Has Not Met His Son, Zoravar For 2 Years, Shares A Heartmelting Video 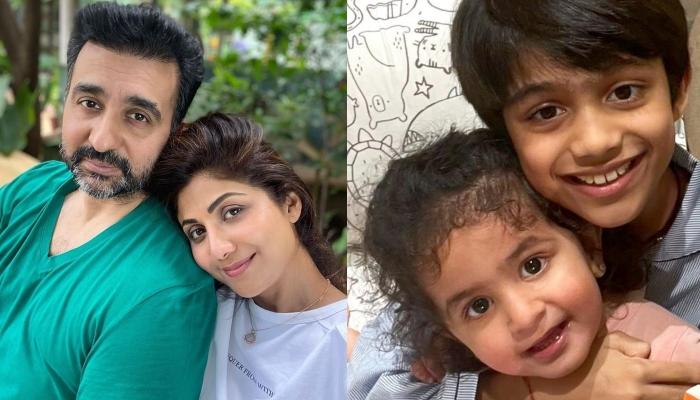 Bollywood actress, Shilpa Shetty Kundra and her husband, Raj Kundra believe in teaching their kids, Samisha Shetty Kundra and Viaan Kundra kindness from a young age. They often take them to spiritual places and try to celebrate every festival with pomp and devotion. On Father's Day, Shilpa shared an adorable